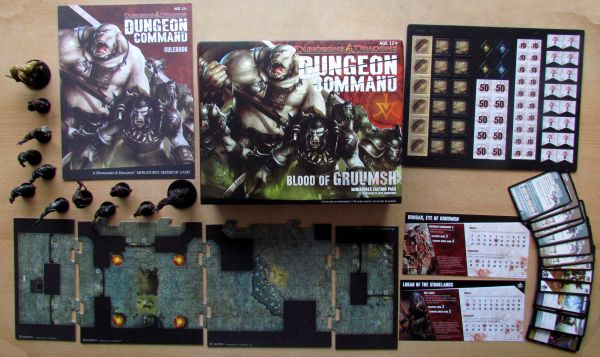 Red blood colored the little stream bubbling through hillside. Orcs were slaughtered like pigs, its nation is despised everywhere. Their existence was misunderstood for centuries and with several bloodsheds seemingly coming to an end. Only the last rocky area belongs to them, from where they can not even come out. There is no return, there are spears and arrows waiting behind every stone.. Everyone is afraid of these creatures, because of their size and lack of talking with others. But in fact, they would make for excellent farmers and friends, if only they were given a chance..

But no one knows that. Orcs were driven to the brink of extinction. And in such a situation, even the most peaceful creature turns into a bloodthirsty beast. Blood of their leader, Gruumsh, was shed. Now it’s time to muster all the men and avenge all fallen. When orcs get mad, you do not want to stand in their way..

However, you might like to stand in line for a new expansion of Dungeon Command, miniature combat fun. But we will not forestall everything and take first things first. Blood of Gruumsh is the title of the latest expansion, released only in March 2013 and, as such, is last of available boxes for this game. In the review, we gave him priority undead Curse of Undeath. We will deal with it next. 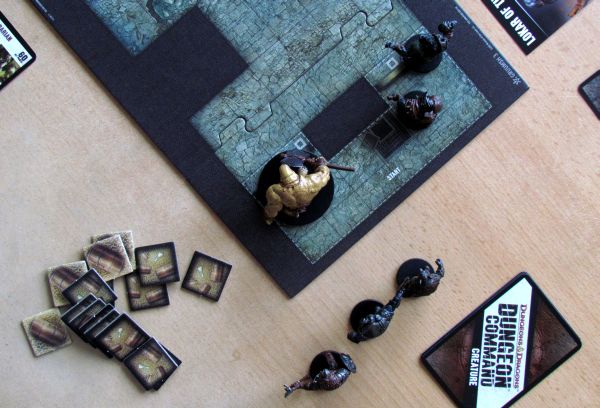 But now back to the new box, which still comes from the stable of Wizards of the Coast. Likewise four authors have not changed either – Chris Dupuis, Peter Lee, Kevin Tatroe and Rodney Thompson.

Since we already published two arcticles about Dungeon Command on our site – recently about the Tyranny of Goblins (review) and more in the past, joint evaluation of the first two – Sting of Lolth and Heart of Cormyr (review), we will not go into any detail regarding gameplay of the whole world. Who wants to learn, how to play Dungeon Command generally, should instead start with those two articles.

Box is the same as the previous ones, built for a fraction of one player. The basic idea is to allow you to enjoy also a little duel with it alone in two players, but it will not be nearly full version of the game, with units split to halves. Although we use this to simplify our photos, so you can see only tiles from this expansion.. The box did not change, as well as the distribution of the insert inside. After unlocking and lifting the lid, you find booklet (with a changed title picture, inside there are still spiders from Lolth) and beneath it, a game board rushes out. 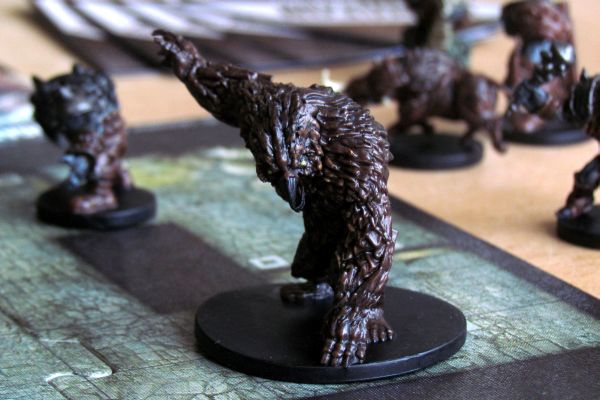 Four boards are classically double-sided and shows interior of the cave on one side and cheerful green meadow on the other. Again, they contain art specific for the race. This time, we can find an orc camp with outstretched fur, surrounded by four fires. And one crumbling floor near it. On other side, among the grass, there is a lake as difficult terrain and also forests to hide near edges of the board. Orcs do know, how to pick their good defensive spot to live, although they are not defensive race at all in the end.

Otherwise, you get a classic war field with difficult terrain. These triangular spots are good for orks, but still there is nothing so specific, like a magic circle, which we found in the last goblin expansion. There are simply squares, where your fighters can run.

There are also two new commanders, which you can become during the game. There is Drogar, , Eye of Gruumsh and Lokar of the Stonelands. Both differ from one another not only in appearance, but also in starting points. While Lokar has only 11 morale, leadership is already on nine. Conversely Drogar is not so good leader (leadership 7), but the morale begins on fifteen and therefore he can spread his countless army from the beginning. 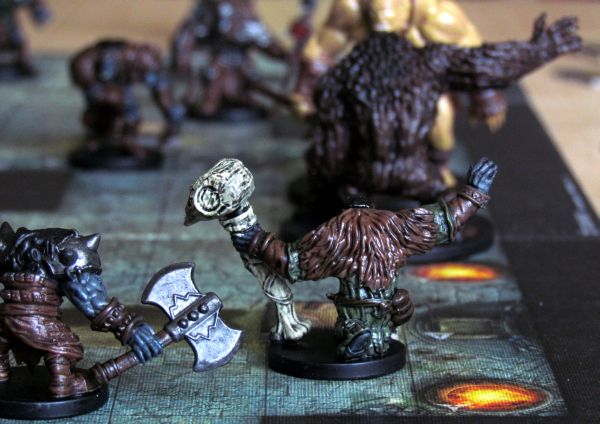 But now, we look at special skills of both commanders. When we spoke earlier of the difficult terrain, we have to mention Drogars ability. Because he is a direct child of the dreaded Gruusmhe, his word has true weight and soldiers will not dare to disobey him. All units under his command can ignore difficult terrain and move through it, like they were common fields.

This ensures, that you will discover already quite clear change in tactics, when playing as him. You must take advantage of the difficult terrain and your opponent must stay away from places, that would otherwise be safe. Orcs have big figures, which makes this advantage of crossing water or stone obstacles thematically good. That is also reason, why you find these large obstacles (lakes and landslides) on your terrain tiles. Although only one of commanders has option to use it..

On the other hand, Lokar has not so good discipline, so his troops won’t make it through difficult terrain as quickly. But he is used to battling among rocks, war full of surprises and this also matches his advantage. One of his unit can start at the rear of the enemy, particularly in any area with a treasure chest. Honestly, it is not as big advantage as Drogar’s, but if you use it well, it can be very useful for some guerrilla tactics. 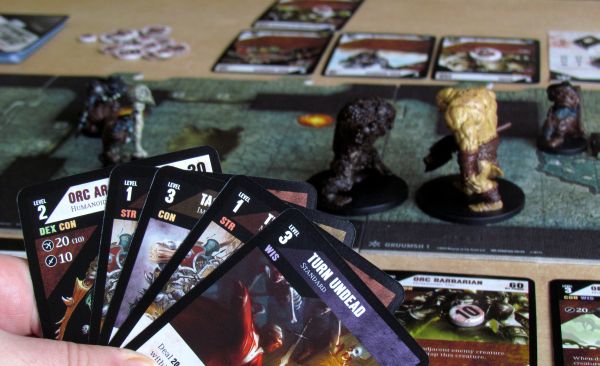 Reason, why you are buying expansions for Dungeon Command, in addition to the usual fun of the game, are beautiful painted miniatures. And because, we have complained a little about monotony of Tyranny of Goblins, we are excited here. While Orcs have no dominant huge figure, that would took battlefield for himself, detail of miniatures and their colors are excellent this time. You can enjoy tonal detail of the shaman or come in contact with an ogre with gigantic axe.

Ogre is largest figure in the package, but also Owlbear takes up four spaces on the board. Both characters have 100 lives, but giant has a devastating attack at 50. None of them have significant additional effects. Although, giant is fun and well-suited to the topic. Indeed, when he enters the battlefield, morale of your army is immediately raised by one.

But we will focus on other miniatures. Interestingly, both of these figures are beaten by the number of lives by Gruumsh’s, cleric who has 120 points. Orc Capatain lets you instantly call another orc to battle, druid can produce monsters and elementals around him (when entering the battlefield, they will appear near him and not on the usual entry point).

Orcs have no major surprises for players. They are totally focused on force, which is given by their body structure. And that correspond to the action cards. Most of them, as well as monsters, have key word with power (STR) and constitution (CON). There are also several Wisdom (WIS) and also interesting pair of cards with ANY words, which can be played on any character, without keyword limitations.

Because you have a cleric in your team, there are in addition to conventional reinforcing also some healing cards of Cure Serious Wounds, which removes 40 points of damage. You will also encounter defensive cards, that block a certain number of points of damage.

Among the orders, you find three already mentioned ANY actions, that are limited only by race, for orcs or humans. Interesting is Fury of Gruumsh, which are attachments for a monster. Thus, while it increases its attack by twenty, at the end of each round, creature also gets injured for 20 points. Its monstrous, but nice card. 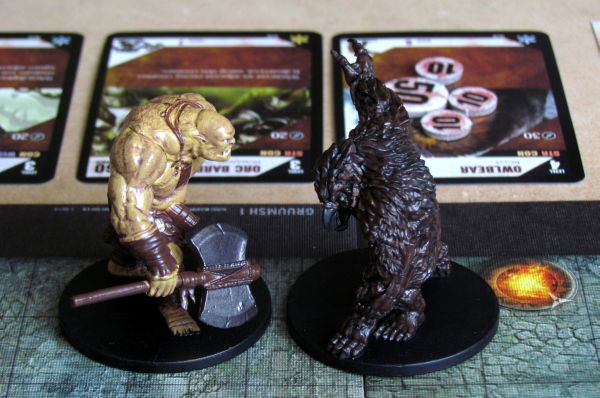 Orcs are strong and can even throw a proper stone. Such a collision can have fatal consequences for many fighters, particularly when the stone can fly to a distance of five fields! And yet, there is a magic in the form of Turn Undead, which damages all dead within a distance of 5 fields. Its card specifically determined against Undead expansion.

Among the players, Blood of Gruumsh will certainly find a lot of fans. Why? Because, if you do not like casting of spells and shooting from a distance and instead, you enjoy simply attacking your enemies from the front, then orcs are cut out for you. All the emphasis is on brute force, which tries to overwhelm his opponent. You don’t want to mess with some orc..

Yet the characters have relatively high levels (only two ones, two twos and three threes) and almost equal number of characters, whose levels are above the number three. Orc machine has a bit of a slow start to blame, but not so much, when you are playing for Lokar with his nine command points at the beginning.

So what could this time be rebuked? Maybe a small imbalance of commanders, who sounds clearly in favor of Drogar. Especially on maps, that have a lot of hard-accessible terrain. Number of initial hand cards is similar, although Drogar has one more action cards for starting. And we can also mutter about the fact, that Gruumsh actually brought nothing radically new into the Dungeon Command series.

Dungeon Command: Blood of Gruumsh is in spite of these small imperfections another great enrichment to the collection, which should be purchased by every lover of fast and inexpensive (yes, you have to buy more sets for tournament play, but that’s not dealbreaker for us) fighting games. It impossible to conclude otherwise, than by mouth of Drogar: Leave nothing alive, burn the camp, and salt the earth beneath it..

- unequal commander cards (not an issue, when not playing with one box only)
- brings nothing entirely new
- price = you need at least two boxes to play Dungeon Command

Blood of Gruumsh is another precious expansion for Dungeon Command. This time, you will encounter truly beautiful miniatures, and while orc expansion will not surprise you with some giant figure, but it offers a different, more power-centered and contact experience. And its, what suits orc race the mose and everything supports this feeling. Although there remain some magic through shaman and cleric, everything else is focused around brute and quice doom of enemy. Two new commanders await you inside and they are not quite balanced one to another. But that is not really an issue, because you will hardly play for orcs against orcs without chance to choose among Lokar and Drogar. There are financial issues dragging with Dungeon Command since its first publishing and they touch its market model. You need two boxes to play full game – one for each player – and that’s expensive. But this expansion offers nothing really new and builds on, what we already know. Its still very interesting choice for players, who prefer direct and uncompromising brute force attack..