by Dušan on 06. 12. 2013
0
previous article
Review: Doomworks - infernal machines of destruction
next article
Support Secrets of the Lost Tomb on Kickstarter! - a cinematic pulp adventure
Contents 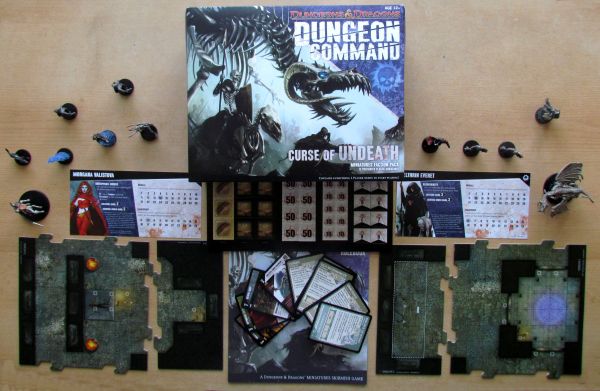 Many people think, that being dead is already in itself a curse. Yes, in fact you could say that. But imagine you’re dead and someone casts a curse on you on top of that. The curse so terrible, that even in your bones fear begins to accumulate. “Those who were good become evil, evil become even more bloodthirsty. Your bones will never rest in peace and you have to fight forever.”

Now a nation of undead enters our world in the new expansion for Dungeon Command (review). And they are really cursed. How else can we explain their insatiable thirst for blood, which prevails even after death? Or are we wrong and they seek only a chance to get their revenge.

Either way, there is now the fifth box for Dungeon Command, after the orcs in the Blood of Gruumsh (review) and goblins in Tyranny of Goblins (review), it concludes our look to this world. More boxes are not available from makers coming of company Wizards of the Coast and we can only hope, that they plan something for us for year 2014. We believe four authors – Chris Dupuis, Peter Lee, Kevin Tatroe and Rodney Thomson, still have not shot out all their ammunition. 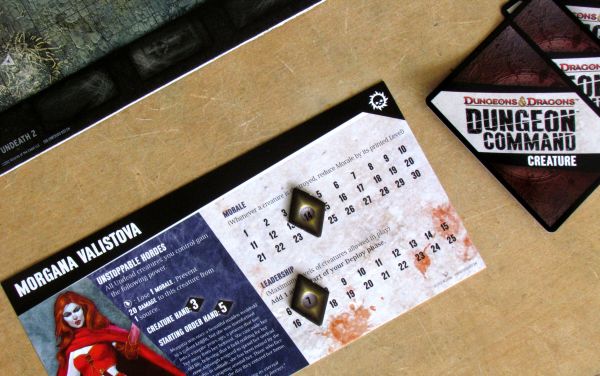 Undead expansion was released in 2012 and it was not the last in the line. The only box with the date 2013 is the Blood of Gruumsh. But there is no doubt, that for those sixteen months of its existence, Dungeon Command has built a nice base of fans. Still, there are plenty of people, who do not know it exists and for those (or some other package owners), we can now show the basic gameplay and specifics of the expansion.

There is probably not much to see on the box. Before you open it, a creepy skeletal dracolich points its beak to you and spreads fear, even if its not accompanied by other skeletal riders. Inside of the box is arranged as we used to – side pockets for tokens (after punching them out) and cards, while the miniatures are carefully stored in their special compartments. Everything is covered by boards showing battlefield.

This time, the environment has changed only subtly. Yet surely magic circles have important meaning (they are present also in goblin expansion), piles of bones can be found everywhere, so you have no doubt about masters of this realm. This makes the undead feel like home. Again, there is green grass on one side, while the other shows dark and cold cave. 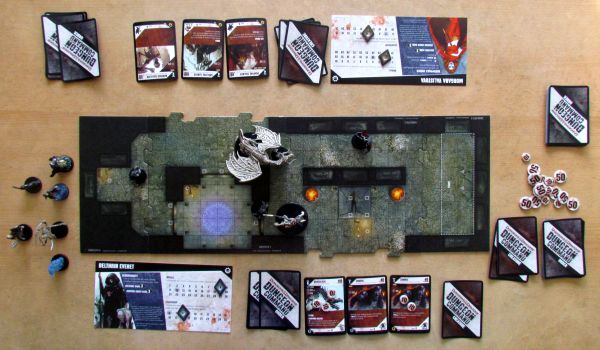 In the game of Dungeon Command, two generals stand against each other, both having two very important qualities – leadership and morale. The first one determines maximum sustainable strength of the army (= number of your units, that can be on the board), second basically sums up your life. For each killed member, you lose the morale according to its level, your army gets more nervous and starts to scattered. Players fight against each other by invoking new monsters, playing action cards and uncompromising attacking. Only one can win – the one, whose army survives and does not run.

But we’re not here to talk about Dungeon Command in general. If you have any questions, direct it to our first doublereview Sting of Lolth versus Heart of Cormyr (review). Now its time we told you, how to play Curse of Undeath and how much do we like it.

At the heart of every army is a general. This time, we have a female role Morgana Valistova looking dashing in a tight suit and then a man wrapped in a hood: Deltrin Everett. Now he is a typical delegate of undead race, with advancing cloud of doom only he is only getting stronger. For each enemy killed, he immediately gets one more point for his leadership! He feeds on enemy panic. Although Delthrin starts only with leadership of six, he has a chance of climbing up very quickly. 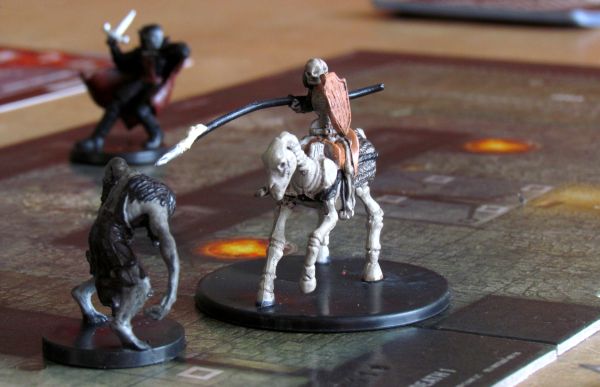 Morgan’s forces may for the loss of one morale point avoid twenty points of injury to one unit. While this is a beneficial action, you will not use it often. But it would not be undead, if they could not play with opponent army morale in other ways, than just through blood and slaughter.

You can directly sow fear by cards in the eyes of the enemy! There is a card called Terrifying Revelation inside the deck. This terrible revelation scares opponents so much, they immediately lose three points of morality. This card can tip the scale to decide a game, if your attack will have a precise timing.

On the other hand, there are cards, that will allow you to gain morale back. We’re talking about the card Hulking Attack, which in the case of successful hit supports morale! At this point, Morgan’s ability sacrificing her morale certainly give a lot more sense to you. 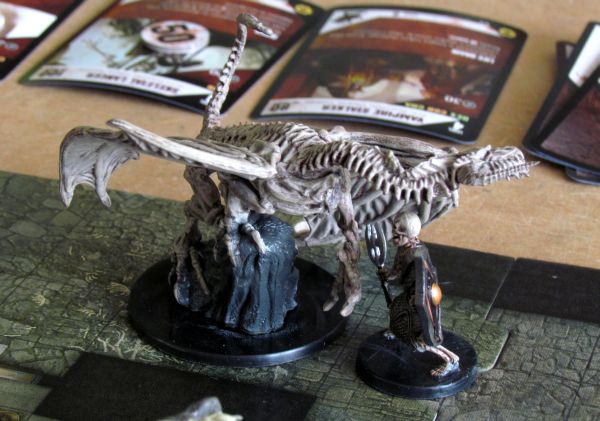 Ghosts will make their debut on the scene, because there’s Hypnotic Spirit. Although it has only 40 lives, but because it is incorporeal, it has to be hit twice in one round to even hurt it! The first attack will always miss. Moreover, this figure can walk through walls! This, in combination with other defensive cards, like Defensive Advantage (that will let you draw a new card to your hand) offers great new tactical options.

Many cards can prevent, block and reduce the damage, that would your units otherwise suffer. This will keep them away from their second death at least for a little bit more. At the same time, you can use various skills to move with enemy units, manipulate them with fear and spells. And what are those magic circles on the board? The card Call to Battle allows you to summon a monster and get one point of morality on top of that!

Two cards are absolutely unique – Magic Short Sword and Vampiric Touch. The latter one can heal your wounds. Combined with some other defensive card, you can create an unstoppable killing machine. Magic Short Sword looks simple and meaningless – enemy can not defend against your melee attacks. But if you equip this card to the correct monster, the knees of greatest heroes start to shake. 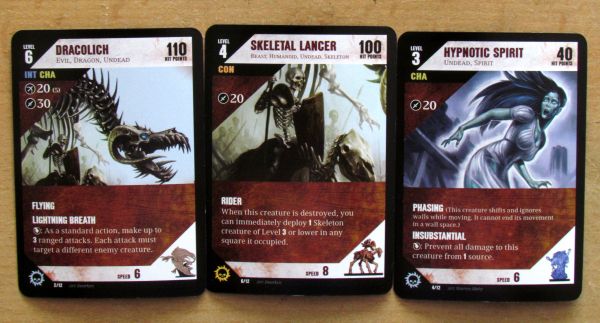 In the ranks of the undead, there are walking sepulchral dogs, all sorts of skeletons, but also a necromancer, who serves as a walking portal for summoning new monsters. A character can start by his side instead of the traditional starting position. After defeating the horse riders, you will still have an ordinary soldier falling of his horse and dracolich has a winding series of attacks each round. It is dangerous both from close and far away. A zombie can be born again from the discard pile, if you’re willing to sacrifice a point of morality.

The game for this new party is absolutely diabolical. Skeletons and the undead do not beat their brains and just go and destroy everything in their path. They have the most important thing on their side – death. And from this results fear. And they can use this to their advantage, reducing damage dealt, thus perfectly using their own (and real) invulnerability. The experience of the game for the undead is unique and shows you the new tactics, that yet remained only within wishes. These wishes come true with Curse of Undeath.

And now add amazing processing to the mix. Looking at the undead rider, dracolich or skeletal warriors, you can only gasp. This is, how painted miniatures look in their best. They remain made of soft plastic and are not so prone to breakage. So much detail is waiting for you with every miniature, as you will be tempted to move out of the eyes and look more closely.. 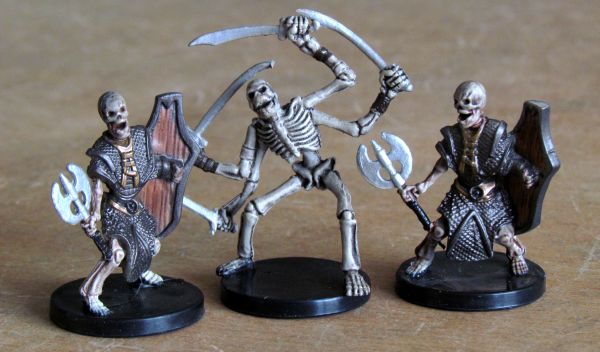 We remember very well, what we wrote at the end of Blood of Gruumsh review, as it is the best expansion up to now, that guarantees a totally unique experience. So here we go again. Curse of the Undeath did it once more, surprised us off guard (at first, it was: Just another skeletons, yawn!) and actually even earlier, when we take the release date into account. If you like the desperation of the enemy and would love to manipulate morality, then a completely unique experience hides in this box. Skeletons, that will not let you rest under a tombstone even for a moment.

Dungeon Command: Curse of the Undeath is an expansion, which advances the perfection of this miniature game a bit further again. It brings not only new beautiful miniatures of skeleton army, but also new way of play. Cards and features bet all on illusory invincibility of the undead, which is reflected also in abilities of generals themselves. The whole expansion is filled with unique experience and tactics, which cannot be done with any other race available. Its probably the best expansion from the whole line and there is practically no reason whatsoever to not buy it, if you like Dungeon Command series.