Review: Dungeon! – one cave, many monsters 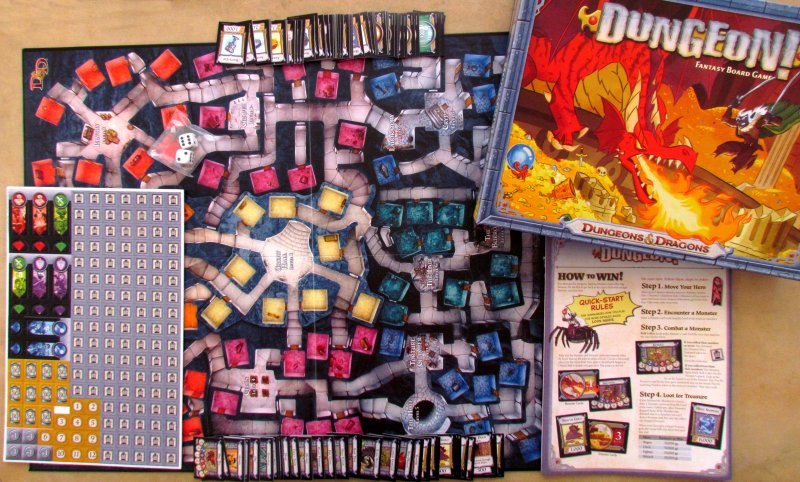 Finally! Now, I know, that all this training was not just for fun. This time it’s all real. Each room has hidden some unpleasant surprise behind its entry door. Hungry goblins, rumbling skeletons and scary spiders. One and all live here and we are ones, who disturbs their peace and quiet. Searching for fame and treasures. And they will defend themselves, believe it..

But we are ready for our chance to fight for wealth. Monsters may look silly, but in fact they are particularly good at one thing – collecting gold. Believe it, because we just discovered cave full of monsters in board game Dungeon! from Wizards of the Coast. It is set in popular Dungeons & Dragons world, for which it was created by a lot of authors headed by Chris Dupuis. One surprise is date of creation, because it goes back to 1975. The new, fifth edition, includes illustrations by duo Victoria Maderna and Franz Vohwinkel.

With box, we have to start from the beginning as it needs you to behave respectfully given its age. All you need is to bow to a dragon spewing fire guarding the whole creation. Everyone should therefore pay attention not to become just a useless black cinder. 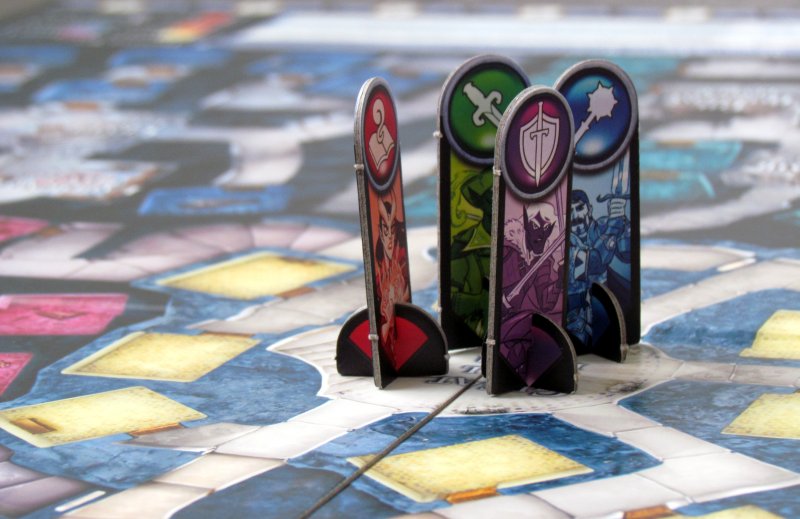 Fortunately, this danger is not so immediate, because dragons are tightly captured inside maze of corridors in the dungeon itself. Meanwhile, they sharpen their claws in one of the chambers, which are the biggest element, that you can see on game board. Hallways and tunnels are divided into sections by color matching difficulty and even farther into small spaces representing steps for your heroes. Whole board has a portrait orientation and at the bottom (excluding text clues) contains a scale for the undefeated monster.

Rest of the game components are already accounted as cardboard pieces, thus heroes of different professions and charmingly tiny tombstones. They will remain in the room after each defeated monster to mark their defeat (and your victory). There are, however, also more tokens indicating skipping next turn or numbers to determine, where surviving monster waits for its next challenger. But the main thing are cards with different monsters (an arc with defense numbers specifically set for each profession) and also treasures cards (and a few spells).

At the beginning of the game, players choose one hero. Each one is different in strength and has a designated area (color-coded levels from one to six on the board), that is safe for him. Higher levels entail considerable risk of eventual death in many unpleasant ways. All selected figures (in their plastic stands) are then placed into the center of the board, from where will they begin their journey. Besides the plan, players spread cards into a total of twelve piles – six for beasts also six for treasures. These six piles differ in color and belong to a specific region (= difficulty) on the board. All the tokens are set aside for now. 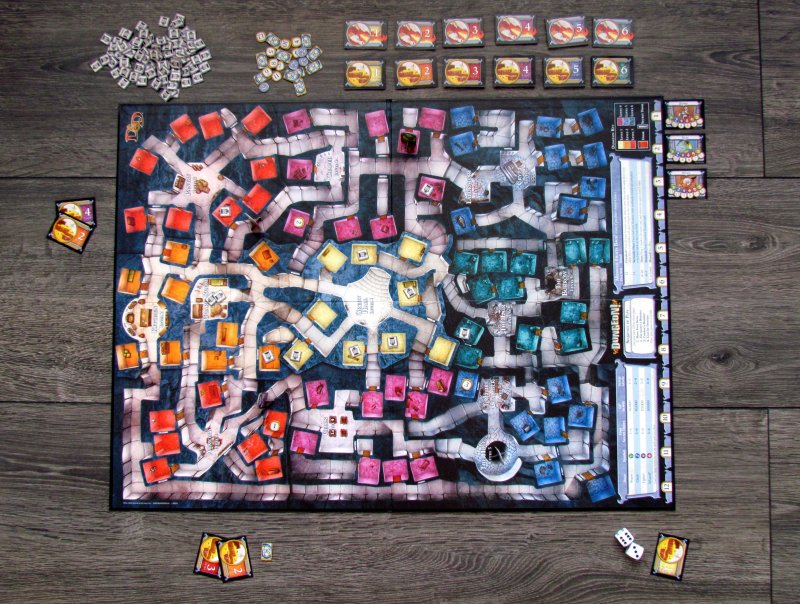 Now it’s time for heroes to finally scatter around the cave and try their strength in the face of adventure. Movement is the basis of everything, and yet it is not driven by luck. Player does not need dice, because his character always has five motion points. In addition to the classic move from field to field or entering a room, opening door also costs one point. Two heroes must never stop at the same place. Moreover, they can search for shortcuts in their neighborhood in the form of secret doors. Just roll the dice and hope for a high result (5 or 6). This is better suited task for a thief (anything greater than or equal to 3 counts as a success).

Once hero stops moving, he can be located in safe area (hallways or already cleaned room) or in room with a monster. This means, that player reveals top card from deck corresponding to level of difficulty and must try to defeat this monster. To do this, he will need a pair of dice, roll them and then compare result with number under symbol for his profession (the stronger character, the lower value is printed). Comparing these two together makes clear, who won.

Hero can for his success collect treasure (again from same colored stack). At the same time, room receives a gravestone marker. In any ordinary room, players can meet only one monster, so whoever comes in room with headstone, will have nobody to fight. Failure in battle means, that a player takes a couple of dice back into his hand and rolls for a monster. This new sum determines, how his fighter ended. Mostly, his fate will be quite unpleasant, meaning loss of some treasures (remaining in place, someone else can pick it up), but may even die. 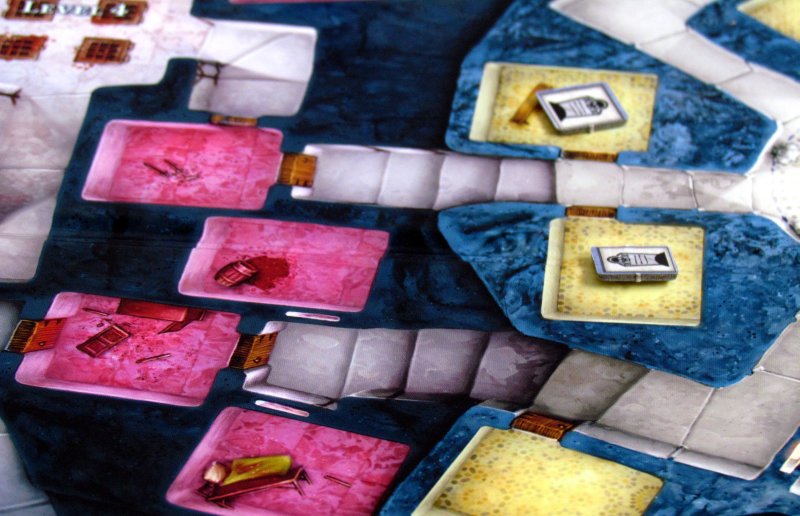 In each case, however, monster remains for next visitors and for someone, who can defeat it. But because there is not enough space on the board, card is placed below box with lowest number on a scale of unslaughtered creatures. And then, token with that corresponding number is placed on the room, where it is waiting. When someone else gets here, he already knows, what battle awaits him.

Individual heroes are no different, but strength and capabilities in search for hidden doors. But there is one more thing. Requirement of the wealth, that they have to collect to win. And while weaker thief and cleric need only to accumulate 10,000 gold, a warrior has deeper pockets for twenty thousand and wizard (who can move more or less safely up to highest sixth level) needs thirty thousand. Whoever reaches value of his profession first is the winner.

Dungeon! is a game, that is quite difficult to evaluate. Taken present standards, this is a very simple adventure game, in which players run around caves and try to find most valuable treasures.  Rooms are divided by difficulty, so the more danger you undergo, the more money you get. However, the victory in the fighting are still subject to success of the dice roll. This luck is a source of tension, but at the same time can be source for disappointment.

But we can not look at Dungeon! through the viewfinder of classic contemporary games. This is a classic, reprinted and reimagined to the most modern jacket. And as such, box can celebrate an unambiguous success, because game looks really great. From the detailed and pretty graphics of the board to the illustration on small cards. It is their size (especially tokens), that is the main complaint against the processing as a whole. Small tombstones are quite tough to handle. 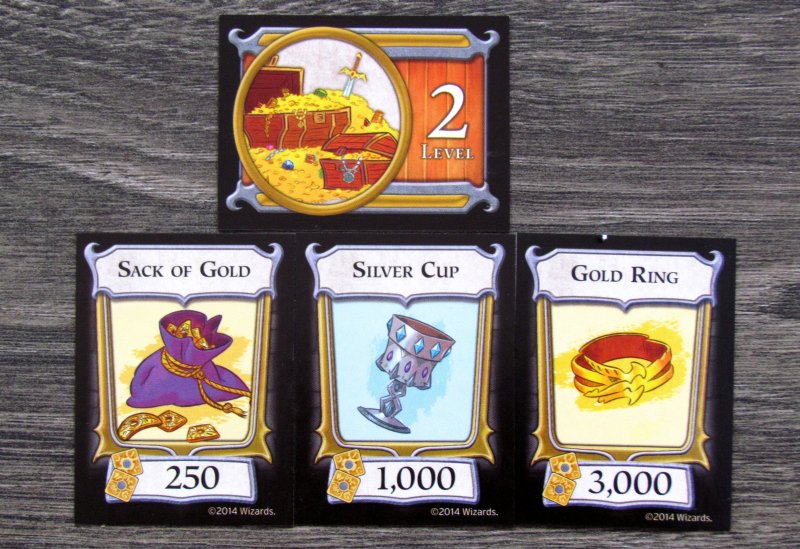 But back to the gameplay and feel of it. All this adventuring is very simple and completely accessible to all. Most of it, in our experience, can be enjoyed fathers with their sons. However, some girls and moms can surprise and enjoy a proper battle as well. Families are in any event the main target group, but even die-hard players can surprise. When they sit in front of an unexplored dungeon, they will take no break until they complete this challenge and are fighting until their last breath.

It is good, that movement is controlled by players themselves. And even better is differentiation of their financial goals. So you have the urge to try out all heroes, win with them and it significantly extends replayability. This one is otherwise a bit questionable, since the board remains the same and only thing, that changes, is the distribution of monsters. For a pleasant and quick experience, this is still enough.

That is, why playing time is crucial advantage of this box. Entire adventure will be fulfilled and completed in about thirty to forty-five minutes. And of course, you will experience many exciting moments during that time. It actually is true regardless of number of players, because board is big and each of heroes explores his part anyways, or waits for death of others to go there. 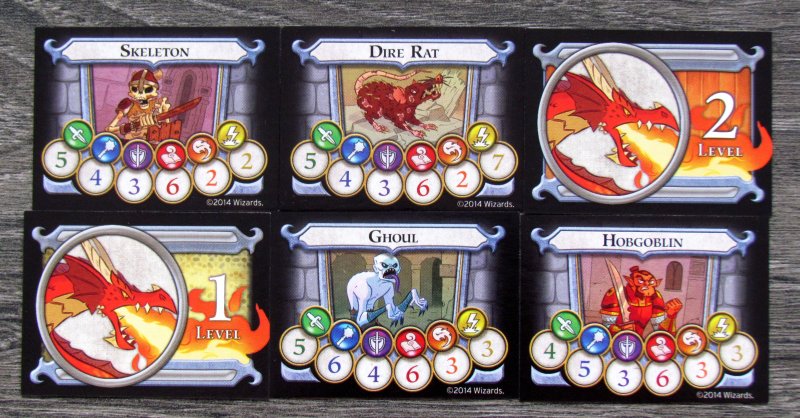 Dungeon! just has a soul and atmosphere. Like Talisman, it is very simple and based on simple rolling of the dice. And yet, it knows well, how to entertain in an amazing way. This game will please not only collectors, but also ordinary players, who want just to fight. Dungeon! is here just for that!

You might think that, we were crazy to evaluate Dungeon! so highly. But it's not just nostalgia and free review copy. The game has won it with us thanks to simple rules. It works well and is able to bring excellent fun to each group, together with laughter and experience. And this is highly appreciated. Then, it does not so much matter, that chance governs all duels and players therefore have not much control over this. They simply have to stick to their part of dungeon, but then still, taking some risks. Basic strategies are there and everything is over, before you know it. But it's not really enough, because you want to return again to the world of Dungeon! and your children are likely even more!

by Dušan on 11. 05. 2015
Each city must have some sustenance. It may be fireworks, strange attractions or vegetables sale. These are all regular businesses. But we have something [...]

by Dušan on 28. 07. 2014
Battles always leave traces. And yet, when you return to your desk to seduce a new battle in the board game, everything is back as it was before. But not [...]

by Dušan on 06. 12. 2013
You have deflected one attack and right behind the orcs, there are undead coming for your kingdom. Skeletons and zombies are just a beginning. They rose [...]

by Dušan on 22. 04. 2013
Orcs are sharpening their weapons. There are whispers everywhere, that a final decisive battle will happen soon. And it should decide fate of the whole orc [...]

by Dušan on 31. 01. 2013
Goblins are entering war and they will pretty much stir all the battle outcomes, which seem definite. Their green bodies will cover up spiders and dragons [...]

Review: Dungeon Command Sting of Lolth vs Heart of Cormyr – spiders against dragon

by Dušan on 04. 10. 2012
When two armies clash, its always a rumble. The whole weight of decision making lies on back of generals, standing on some high place and giving orders to [...]
Comments
Leave a reply