Review: DungeonQuest – who runs away wins 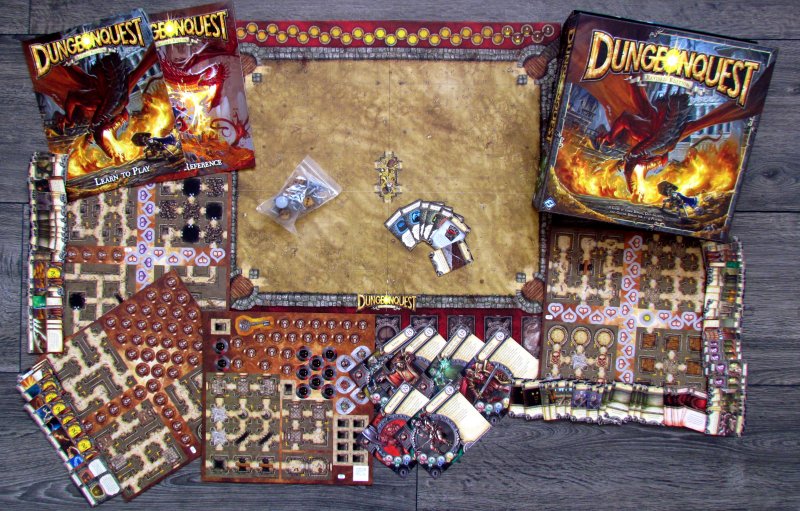 I stand at the entrance into the mythical labyrinth, which became famous from two very different yet closely related reasons. First is unimaginable riches, that are hidden in its uncharted hallways. But how is it possible, that this gold is still there, although legends are sung about it for few weeks? This is the second reason, which made this place famouse. There is horrible horror hiding somewhere inside. Fiery dragon, which will be awakened by your greed.

How is all this possible? If you want to know, you should play board game DungeonQuest. Specifically the revised edition, which landed on desk in our newsroom. This is a game, which was created back in 1985 and has already succeeded in enchanting many players. Its author is Jakob Bonds, and many illustrators helped to bring this new 2014 release to life. The entire compilation of ideas and images is published in a box under the supervision of Fantasy Flight Games.

Game is hidden in a box of fire, ruled by a dragon on lid illustration. Knight, who stand against him, looks really tiny, but is never nearly frightened. Similarly, you will feel the warmth of dragon’s breath and darkness of the cave by yourself, when you finally open the box. At its core is hidden game board with empty space to map the cave and also places to store nine decks of cards. The battlefield is surrounded by high walls and each of the corners has one entry point for a hero. Above this all is counter measuring length of the day. Nobody had ever survived night in this maze and do not be foolish to think you can change that! 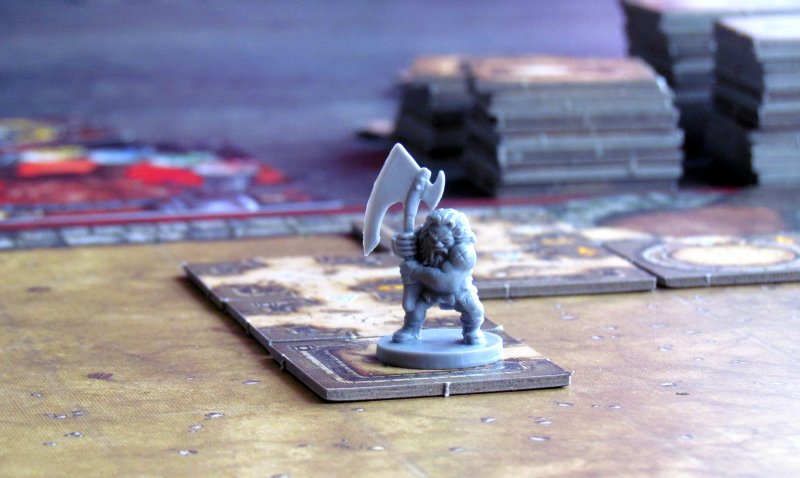 But because a map is empty so far and players are looking only at derelict land, you need something to fill it with and make the labyrinth. To do this, a whopping 117 pieces of the maze will gladly serve. Each has a its corridors, arrow of entry to the location and other symbols. Cardboard components also include quest tokens, monsters, hearts, injuries and entrances to the catacombs. There is also four dice and two markers (first player and sun). More important, however, are cards, on which we find only six heroes (each with its own four levels of skills, number of lives and abilities), but also a heap of other packages of different kinds of cards (from equipment, through monsters and traps, all the way to battle cards). Listing is closed by miniatures representing different heroes.

Now players will become these heroes during the game and each of the participating players must choose one as his incarnation. At the same time, they also take appropriate oversized hero card, stand miniature in one (selected) corner of the board and draw one rune card. Beneath currently empty game plan are placed all the shuffled decks of cards. Remaining two (battle cards and heroes) are prepared next to the board, as well as piles of tokens.

Players, just like true heroes, have a simple job to do in their turn. They choose one of three possible activities. And only two of them are accessible anytime and anywhere. Main element of gameplay is movement. Each new move activates location of arrival and player must cope with its event. For much of the game, players will explore and discover new and new places as the board is filled with tiles. Whenever a hero enters uncharted territory, he takes top card from the locations deck and places it on the board, with arrow of entry point pointing to where he came from. 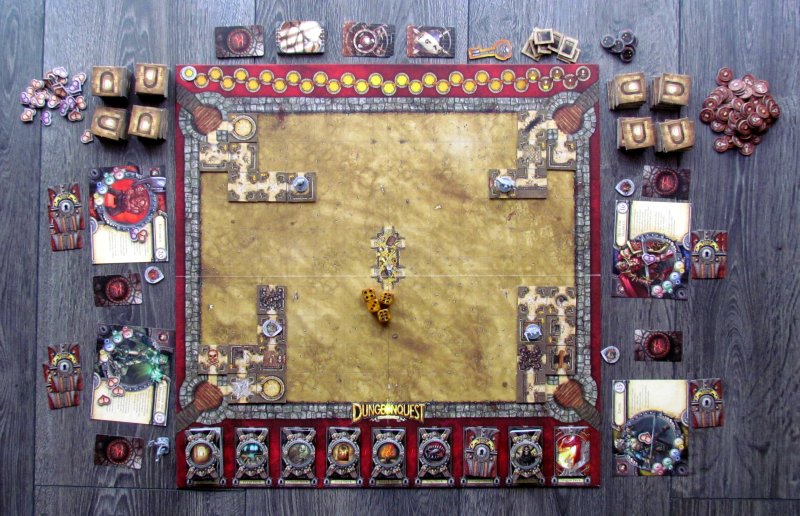 Room can also be examined and take apropriate search card. Then immediately a search token is placed on this space, which indicates, that there is nothing to be found here anymore. During their adventures, players can also encounter monsters, that inhabit places in this dark cave. They will be fought using cards. Neighbor of active player will become a monster. He first must draw on card representing creature encounter (not showing to anyone) and draws three cards from battle deck as well as his enemy – the hero.

Both cards are compared and identify, how much damage have rivals dealt to each other and how many injuries they should receive. Defeated monster brings nothing. But a hero, after losing all his lives, really dies. That player does not get another chance at winning this match.

As players explore the underground, they find plenty of ways to draw cards and gain some valuable objects. In addition, they will be needing luck from time to time, because individual rooms have a way of making hero’s stay miserable. And so, players will be experiencing need for dice and testing of their skills (rolled number needs to be lower). But where they can earn a lot of unexpected points are catacombs. When players enter these underground mazes, their pawn disappears from the board. It may emerge on quite another place, counted based on obtained cards and dice roll. 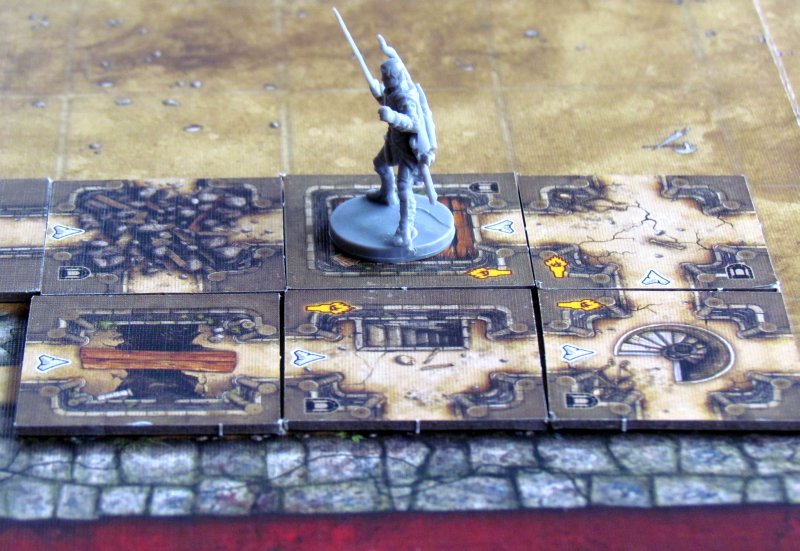 Every time the word gets back to starting player, he moves sun token forward. Time indicator is moved until it arrives on the last box. Where exactly labyrinth closes up and game ends is decided again by luck. Until then, players must get outside safely. Only among those, who managed to escape with their treasures will be decided about true winner. It will be the one, who accumulated the most wealth.

There is no reason to hide it. We enjoyed DungeonQuest pretty much. Carefree dungeon-crawling, at the end of which awaits a cliffhanger. Heroes must time their escape from the labyrinth well, otherwise they will get swallowed by the night and no one will ever see them again. But maybe a little risking will not harm and can help them to grasp victory, because closing moment (when sun sets) is not strictly set. These are your decisions, that you have to do during the game.

Until that time, players can have fun discovering new and new places in the labyrinth. Each game has a different map setup composed of randomly drawn tiles. Moreover, even rotation of those sites is changing, and so is not realistic to encounter two similar arrangements anytime soon. Variability in overall game can really be guaranteed. It’s also because of number of cards there is to choose from. 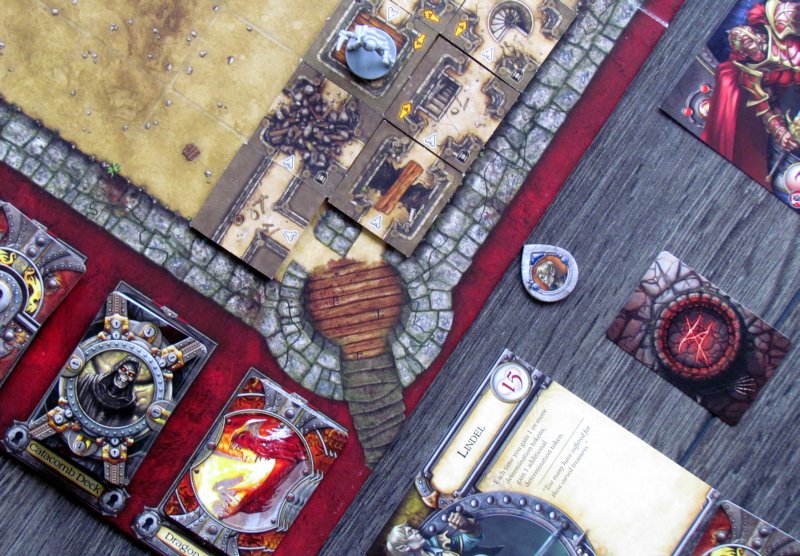 We have not played previous versions of the game, so we can not compare. But the biggest tripper for players this time will again be luck. You encounter it at your every step and let’s be honest – heroes are certainly not immortal. So big truth for this game. Simply one bad step together with bit of bad luck and your head suddenly rolls on the ground or you see hero falling into some abyss and you know, that it’s over.

When you walk into a room, you can meet a lot of inconvenience. Unpredictability is the main weapon of this game at all times. But it all depends on how seasoned fighters you are. The rules also offer a second option, in which death is not permanent. The hero loses all his accumulated treasures, but can continue. Resumes is one of the entry points into the cave. This version is not as much fun, because mortality of your hero is the main focus point.

You cannot fight luck. But you can try. Players get tokens for their failures, which in subsequent rounds may be used to slightly affect results of their rolls. In fact, just this inexorability guile and luck is the reason, why some players get to truly love this game. Game has a true and not artificial atmosphere, which make Damocles sword constantly hanging over all participants.

Player elimination is not a fault here, its a completely undisguised property, that belong to the overall experience. If you do not like it, do not play this game! In each round, threat of heroes dying is imminent. But luckily the game is not extremely long and even the laggards are able to escape from the cave to sixty minutes. It really makes the game a generator of thrills and experiences, that are almost impossible to survive. A true rollercoaster. The entire match is about temptation winning over luck.

The whole game is really fun and it carefully treads in dungeon-crawling genre. We consider it to be truly original in some points. The main moment is, when players head to the catacombs. Hero is really somewhere under ground, looking for treasures, drawing cards, encountering all kinds of stuff and emerges in a completely different site maps. It looks and works great. 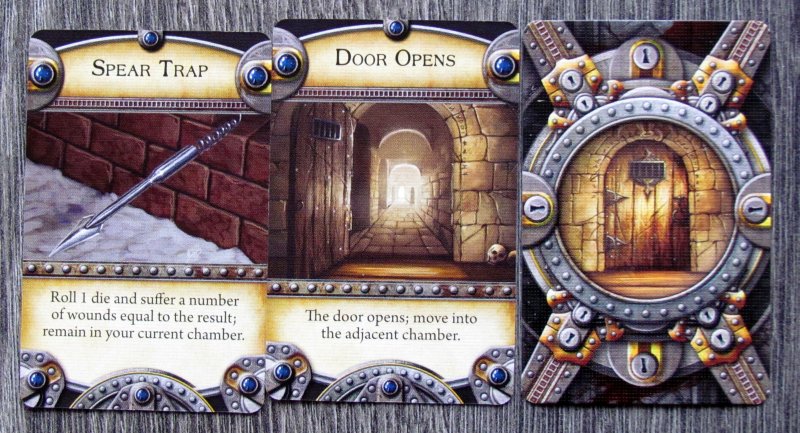 DungeonQuest is game, which was created thirty years ago and still has not lost any of its magic. It’s random crazy fun, that offers a great atmosphere. It is great fun for families and incomparably better and more exciting than Ludo, although the core gameplay can be seen as similarly random. Length is not restrictive and luck belongs amongt obvious qualities needed for all heroes. Processing is great. DungeonQuest therefore is excellent entertainment for those, who do not mind, that the dice will decide about their life and death. Not dying peacefully, that is all, that this one is all about.

- players elimination (even in first turns)
- luck with every step

DungeonQuest is already classic game for many families, mostly in USA. For us, it is less known, because it was not available here so long. But if you love games with atmosphere, then this one is a great way to enjoy fun with dice and talk it out with your own bad luck. This game does not give anything free for your heroes and still lets them fall into a bottomless hole and die. But that's okay, because every action is now accompanied by tension and together allows you to experience a proper adventure. The game is compact, simple and full of nice ideas. DungeonQuest is a clear family favorite for little boys (not by age).