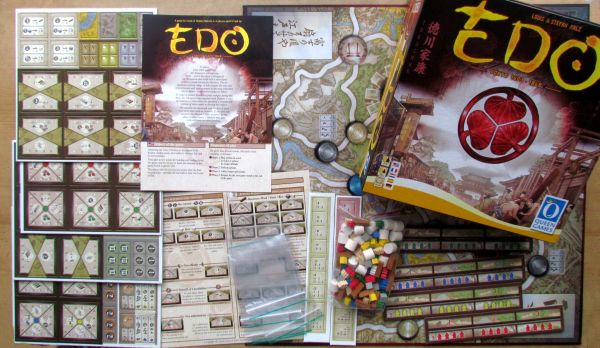 Once upon a time, nobody knew us. There were only a few houses, one footbridge leading to the sea and few fishing boats at anchor. We set out to sea each morning, hoping for a good catch, which will provide us with food for next few less successful days. But fish sail the sea and people change. Likewise, also our village has changed. Edo is growing with each passed day and once , we will probably be only small ants in a big metropolis.

Secret desires of fishermen fulfilled during upcoming four centuries. From a small settlement, Edo has grown into a huge Tokio and we can contribute to its starting growth as well. Board game Edo will help us with this. It was published by Queen Games and can be placed in columns with bigger games alongside Lost Legends (review) or Kingdom Builder (review). Authors of this game are Louis and Stefan Malz, it came out in 2012 and illustration were prepared by Marko Fiedler and Stephan Claus.

Game can be found in a square box, that is filled to the brim. First up is usual rulebook, that will certainly delight you with its length. Everything is clearly explained on three sheets filled with pictorial examples. Moreover, you will get one square sheet describing actions and training games. 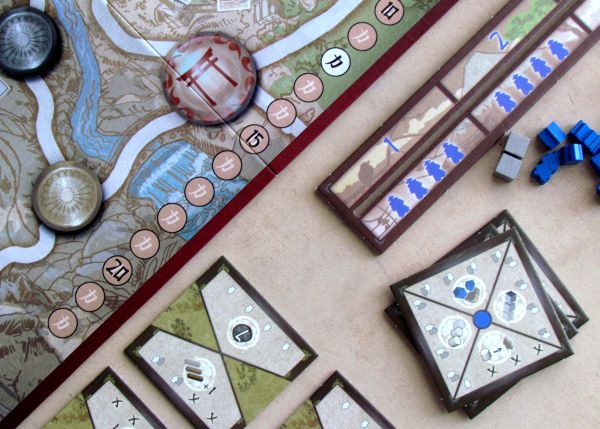 Besides a large, folding and mutual board with a map of Edo, inside of the box is filled mainly with cardboard pieces – a quartet of stands, square boards of authorization, ten merchants, but also coins in five values and tokens describing distribution of earnings. There are also wooden pieces, that represent civil servants, as well as houses, business places and tokens of raw materials (rice, wood and stone).

Out of these, you create a supply next to the board at the beginning of the game. You put into common stock also neutral (white) figures of shogun officials, special board of authorization, eight forts and trader boards. Conversely, players get officials in their color, accompanied by seven houses, one trading post and one token for tracking victory points. They also get a stand and trio of starting authorization board, which are put in it. Everyone then gets rice and twenty ryo, as currency in Edo is called.

You put shuffled trader boards next to the game plan. According to number of players, you possible will cover up some scoring tables on the board with auxiliary (empty) tiles. Other point tables will be added on the board for each city. There are seven cities all around (Edo and six in a circle), with circles surrounding each of them, showing building land, where players will place their buildings. Some of them are occupied now by all rivals by playing the building and placement of officer in the center of the city. 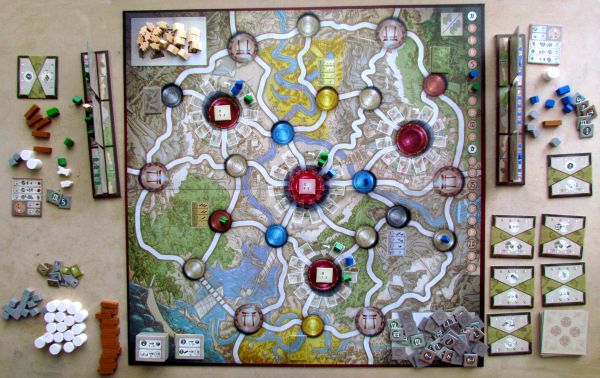 After a difficult preparation, we can finally start playing. Each of several rounds is divided into four phases, which are players together working their way through. Most important is the one, with which it all starts. This is planning of actions with a trio of big square authority tiles. Each of them provides a choice from four activities, that differ from each other distinctively. Players insert these boards into the cradle in the order, in which they want to perform them, always with selected action pointing down. That’s not all, because they must assign one or more officials to each of these actions up to the amount, that is allowed by this particular activity.

Gradually, players carry out operations from left to right. They reveal one after other, alternating in it. As a result of selected actions, players can accumulate new finance, resources, enhanced planning boards or reinforcements from among shoguns officials, but also move their samurai around the map. What? What kind of samurai? You must first let your officer travel. In one round, you send him to Edo and in the next one, he is trained in art of the samurai.

Then there is also pretty fundamental building. Players place them in the cities and their presence decide about superiority and income. Here position of the pieces comes into play, as player needs to have placed his pawn in the place, where he builds. In addition to the building, you also have to pay amount of raw materials for this action. 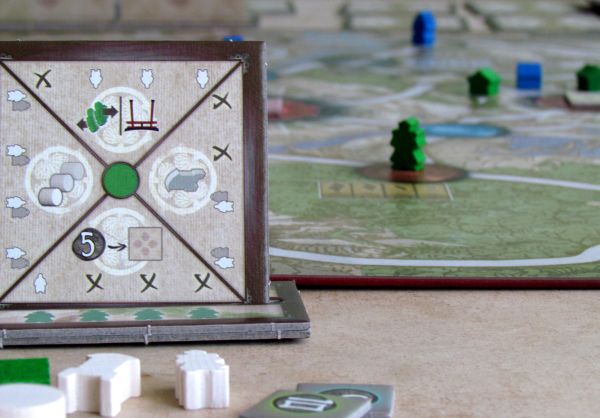 Before we move on to evaluation of majority in cities, we should also mention possibility to transform not only raw materials, but also power points tracked on a special scale on the board. This is done in each round by using an active trader board, which allows players some kind of exchange.

At the beginning of the third phase, each player must pay for his officials or pull them back home. Only those returned characters can be used in the next round to plan actions. Gain of money follows and corresponts to majority in cities. Player with the highest power of buildings (there are also more powerful forts in the game) is the most successful, but also his adversaries, who are present in the city, get rewards allocated according to scoring table in this town.

Game continues with rounds, until players run out of plates or one of them reaches twelve victory points (power points here). But only those builders, who have at least one building in the capital, may participate in battle for the win. Each of them gets extra payoff for his samurai and money. Winner is the player with highest point gain. 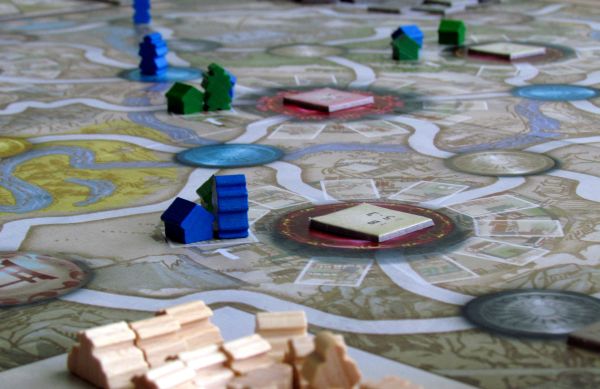 Edo is an interesting game, that contains secret planning above all. Although mechanisms is not very breakthrough and we used it couple of times before, its design is fresh and original. Rotation of tiles with four actions, one of which must be selected, is only the beginning. Individual activities have different requirements and constraints, that you must reckon with.

Transformation of officials into samurai and raw materials into buildings are two paths to a common goal. You cannot achieve victory by concentrating on a single element. Yet players still have plenty of freedom and liberty to make them feel, like they truly manage their game. Game still retains a number of different tactics, you can work out to win.

Secret planning is fun. We will not keep it a secret, that this is why Edo captured our attention very quickly. But it is not only because of these stands and hidden pawns. Game itself has a nice atmosphere and everything is connected nicely. You are doing only things, that are needed to gain influence in various cities. It brings you money, that you can continue to turn into further reinforcements. 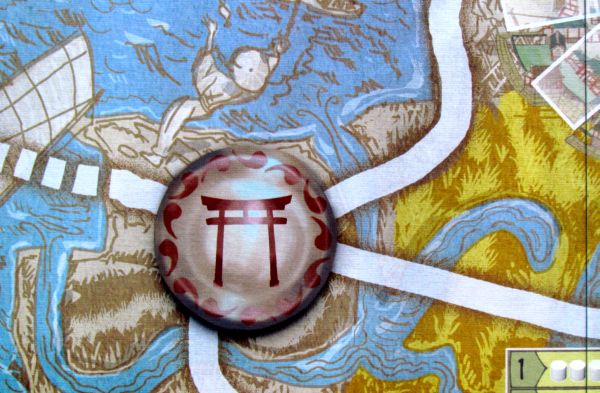 You need to think three moves ahead, which brings a lot of interesting situations, that benefit from the immediate change on the board. You often will not be happy about development of situation on the map, because before you get to your third scheduled action, your priorities may completely change. You have to often change tactics and adapt to new situations. The game is about majority in buildings, that is flowing back and forth very quickly.

Edo is excellent in all numbers of players, but you will have greatest joy from a duel, which is really excellent and strategic. And not many similar games can say that. A simple adjustment of several initial conditions (according to rules) and two opponents have absolutely equal opportunities and you will not know, who is in the lead, until the very end of the game.

Now development of the game can be easily reversed in last few rounds or even in the final scoring. Since there is not so many victory points in the game, players can not get into any substantial lead. In addition, you never know, when the game ends. The harder it is to plan advantage for the final scoring. Sometimes, its simply too late. 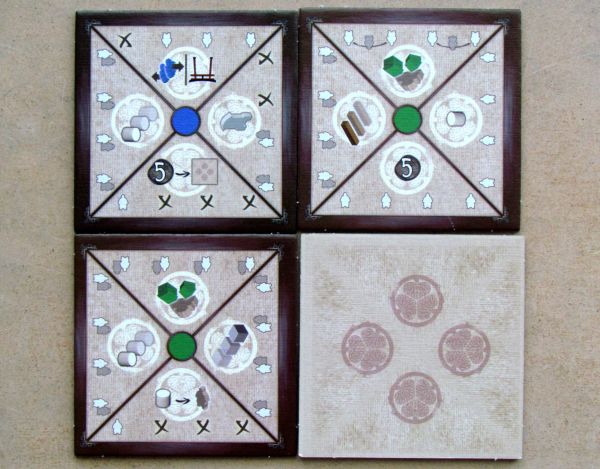 Players face a comprehensive planning requirements. But the only drawback is, if you participate in the game with really thoughtful opponents. Turns of such a player can then unnecessarily stretch and atmosphere suffers a little from this. But it is a general problem for all games with more options to choose from and we should not therefore refer to it as significant.

This is exceptionally accurate and balanced game, while game time holds in addition also on the lower floors. We are talking about an hour of your time (especially in two and three players), in which you can manage to enjoy planning, placement of figures and trading. It’s all in the mix, which can be great fun and a challenge for advanced players.

Edo presents gamers with a unique combination of secret planning and worker placement, thus spreads over the game world as a little spider web. And this mix works so well, that you will come back to play again and again. Variability comes in the very nature of the game, so every game will be popping with new options. Values on the game board are always spread in different way. This is certainly not a simple game, although rules are not complicated. Many options close the door a little for beginners. Edo should therefore be included in collection of all lovers of thoughtful euro games.

Edo is all about secret and tactical planning of actions, which should help you to get raw materials, but also take possession of some cities on the board. That is, why it is a unique achievement, that brings real master gameplay. Entertainment works in all player numbers, but most of all, you will appreciate it in duels, which provide a balanced strategy game without any luck. Players have their destiny in their hands and because the game offers enough different paths to victory, there is always something to discover. Given the complexity of the content, you will be surprised by game time, which exceeds sixty minutes usually only with four opponents. Turns can stretch with thoughtful players, but otherwise the game is very smooth, full of exciting plan options and difficult decisions. Edo does not reveal veil of victory until the last minute, but you will not win anything by hesitation. And it is the same with this game, which is really good and entertain all discerning player looking for something a little different.