by Dušan on 04. 11. 2015
0
Top 2014
previous article
Review: Korrigans - treasure belongs to the elves
next article
Review: Diego Drachenzahn - teeth are not everything dragons have
Contents 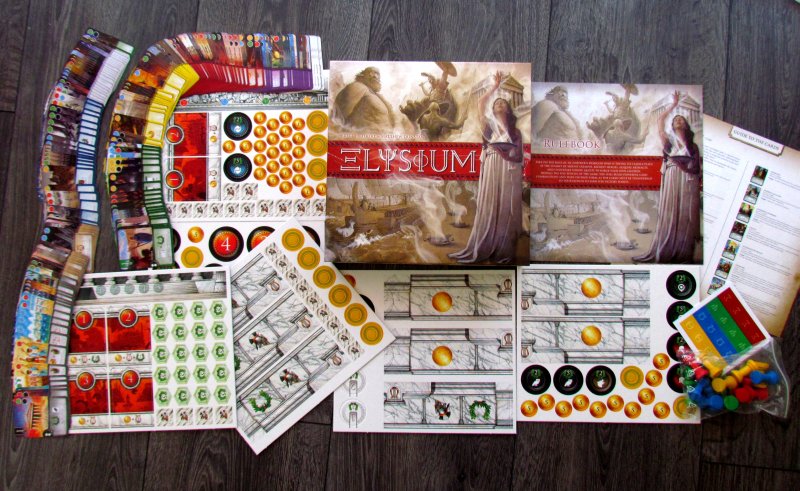 I always thought that being a demigod is a curse. They do not want you anywhere. In the world of the gods, you’re stinking pariah and only some human, who is a bit stronger. For the people, you seem inaccessible as you flowed between their fingertips. Soon you will become a legend in their minds. But in reality, it is the opposite, because their little lives do not seem real to you at all.

And still, anyone of us can become one. At least on trial in board game Elysium, created by a pair of designers: Brett J. Gilbert and Matthew Dunstan. Their work arrived to a company Space Cowboys, where it found plenty of satisfied ears. And then, all it needed was a little push from Asmodée company, so it could go into the big world near the end of 2014.

On the cover of a square box, we see both gods and ordinary people in a double scene. First step towards divinity can be made by lifting the lid and looking at cardboard components, that form the boundaries of the game board. There is a two-sided roof of the temple (each with different layout of colored symbols) and one thin board with five steps. Really elongated are also boards for players, whose space is divided into several boxes functioning as a storehouse for resources. 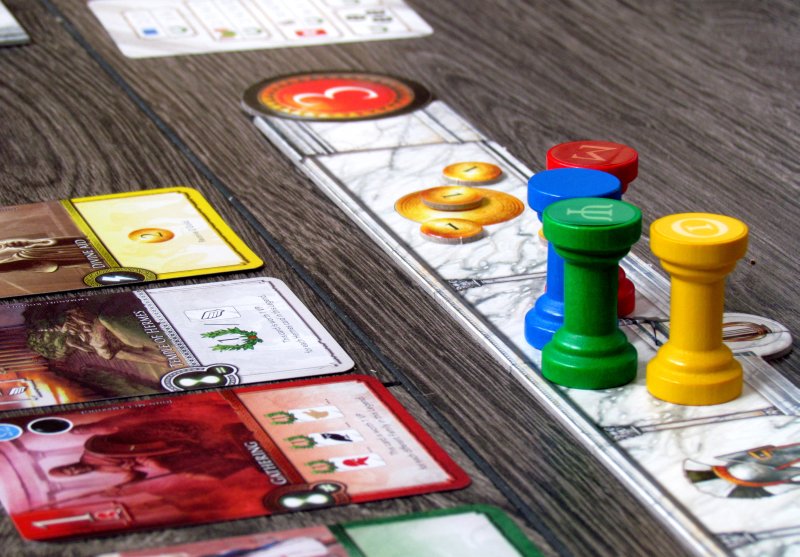 This cardboard trend also continues further with tokens, whether it is prestige points, victory points, coins, tokens, trigger rings or bonuses. Wheels made of cardboard also serve as markers for family legend bonuses, two pieces for each of the available god family. But especially cards, that belong just to those mentioned eight houses, are crucial and always contain twentyone cards. Each card has specified a level (upper left corner), activation symbol, ability of the card written in text and also cost of acquisition. Card deck contains also several task cards with a large number of rank and payout values. But there are also wooden columns (action tokens).

At the beginning of the game, players build a temple by preparings his base of thin cardboard and place era counter on first position of counter. Above this line, task cards should be spread according to number of players and up, over these objects, roof is placed with random side up.

Players then take each one his board and draw for random starting order (red tokens). Then they get four coins, one column of each color and some victory points as compensation for the starting order. Then they simply prepare family deck, while each match will be attended by only five out of eight houses. Starting offer of shuffled cards is chosen according to number of players and spread into the middle of the table beneath the temple. Remaining cards create draw pile and will make company to bonus tokens, gold, victory points and rings lying aside as well. 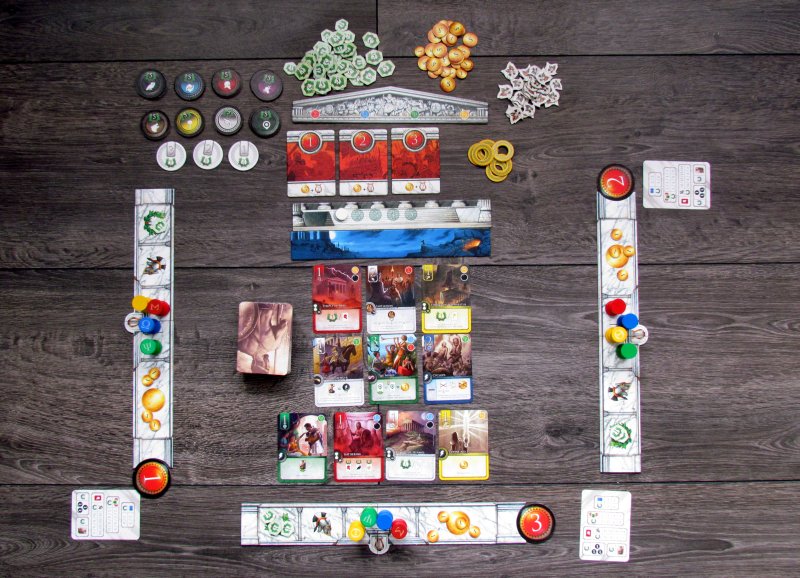 At the beginning of each round, after replacing cards of families with new ones, players must one by one (from starting player) choose four cards from offer – three must belong to some family and last one needs to be a task. Order, in which they are taken, is up to players. But they can select only one card each turn and then others have the same opportunity. Only after their action, player can choose again. But selection gradually narrows, because player must use his column of desired color to buy those cards. And he always also has to sacrifice one of them for the purchase, although not necessarily the one, that was used to make the purchase.

Accumulated cards give players skills for upcoming rounds. Their abilities can be utilized also in a subsequent phase. They simply need to rotate the card by 90 degrees to mark it as used for that round. More different capabilities are at player’s disposal, whether it is immediate action, turn activated or permanent. And there are also cards, that only have one-time usage and they should be marked with circle, when bought.  This is removed after using its power.

Turn is then seemingly coming to an end, as players begin to decide their order for the next. It depends on big digit on task card, that player gained that round. Everyone then return these cards back to bank and receive income printed on it in form of gold and victory points. 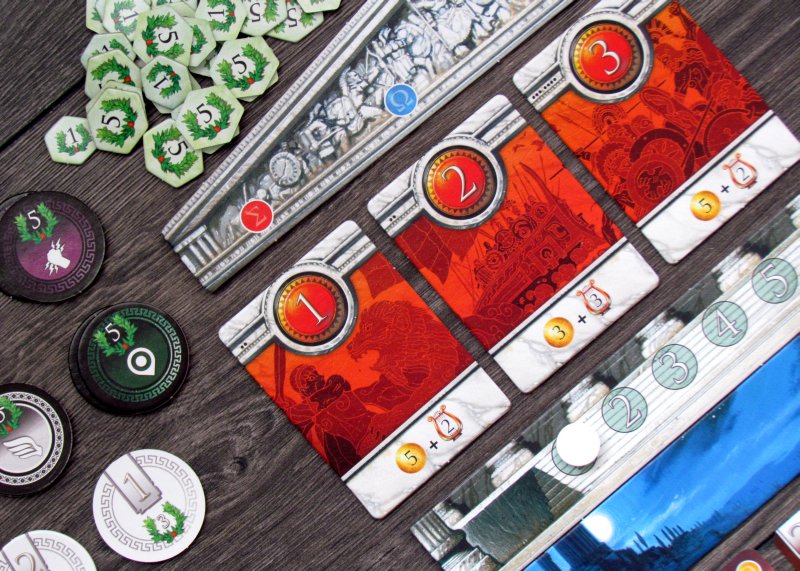 But, the round is not over yet. Final part is dedicated to legends. Players can write these with help of family representatives (= cards), that they were able to obtain during previous rounds (and this one). According to numbers in the laurel printed on task card, they have option to send a certain number of characters into Elysium. But they must pay costs in gold for each of them, corresponding to level of that card. Only then can it be attached to an existing legend or used to create a new one. Players collect sets of the same family with different values ​​or, conversely, five families with the same value. They may also have any number of unfinished sets, its only up to them.

Players take back their columns, move turn counter and continue playing. Aim is to complete those sets of characters, so they bring them sufficient reward at the end. That occurs after playing the fifth era. At that moment, players get points for sets of family and numeric cards according to their size (value increases significantly up to twelve points for the entire set of five cards with one number). Then, they add potential bonuses of owned cards to this sum and compare score achieved with each other. Player with highest value is the winner.

Elysium is a beautiful and fun game, in which heart is breathing in the rhythm of collecting card sets. But these cards also power other options and putting them away into the scoring area is not as easy as it looks. It costs player something (and we are not counting necessary finance). 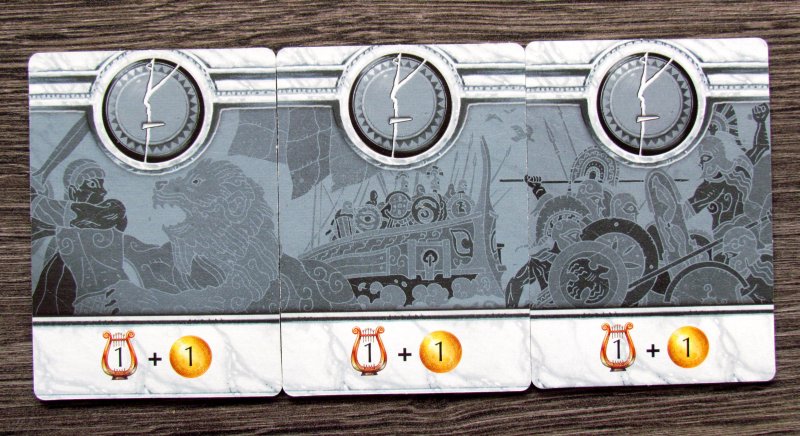 But at the very beginning, there are other decisions. Selecting a card to buy depends on several circumstances, and only one of them is price in columns. With them, player can at least be sure, they will return to him for the next round. But he needs them for purchases in the current. Layout and correct selection of cards is essential to success.

Price of characters is different and it usually corresponds to their power, meaning some cards will be more interesting, than others. And that’s, when you need to decide, if you prefer to give up favorable task card. By acquiring it, player will ensure a better position for the next round, but loses one turn to choose from character offer. But only some of those red goal cards contain laurels and allow player to send cards to Elysia. But even getting this cards has a cost, so its thinking all around.

Not only is the game full of tough decisions, but it is still very variable. Game can host only five out of total eight families. Thanks to this combination, it is always different and unique. But the game does not contain any significant luck and allows good long term planning. 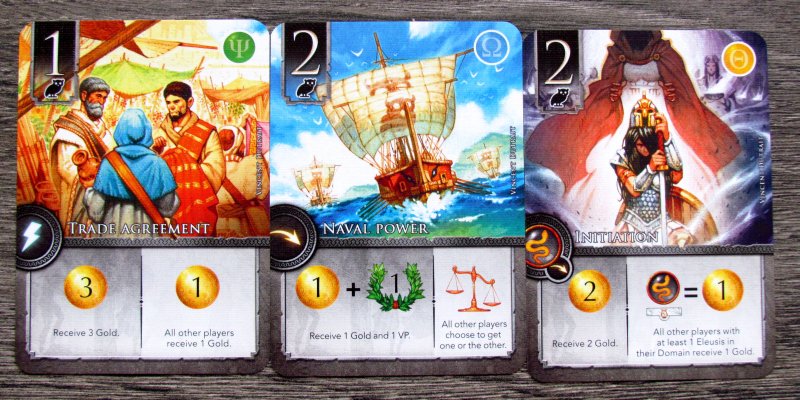 But what happens, when a player spends columns before end of round comes? He should continue purchasing, but does not have anything to buy it for? In that moment, he takes top card from the character drawing pile, but he keeps it with its back side up. This card does not provide any benefits, but it works as a citizen. Those people can be used as jokers, but deduct two points from your score in the final scoring. Even if the player does not get any task card, he will receive the one left there by others. In addition, he turns it to unfinished (gray) side  to indicate, that he will play last in the upcoming round.

The game comes beautifully together, its smooth and everything connects gracefully. Whole box is is packed with entertainment up to the last inch. Game time is long based on your feelings and full of adventures, but in reality, one game will cost you only about one hour of your time (probably a bit more, but only a little).

Game looks absolutely wonderful. Beautiful illustrations, components quality and all this in abundance creates an excellent first impression. But the game will keep the interest of your eyes even during a match. In addition, it works in all available numbers of players, although with top four, it becomes a little slower. Amount of participants is also tightly integrated with interaction, that comes from some families.

Elysium definitely deserves a title, which begins our review. This game is working on A+ and delights all, who like moderately challenging strategy games. For all of us, that fit this condition, it is the best game with euro, stamped by the publishing year 2015. Elysium is off to become a true legend.

- may be slower with four

Elysium is a game, that will not disappear from our newsroom table for a long time. Its simple and straightforward, entertainment is disturbed by a lot of tough decisions, that players must take into account in long-term planning. Game works fine in all the numbers, but also is constantly changing due to different cards and families. Purchase cards with colored columns is excellent and will cause many tough choices on its own. It all looks beautiful, so you will not even mind, that it sometimes progresses slower with four. Elysium is an excellent board game, that fits into the euro genre, and yet it is about much more, than just collecting sets of cards.