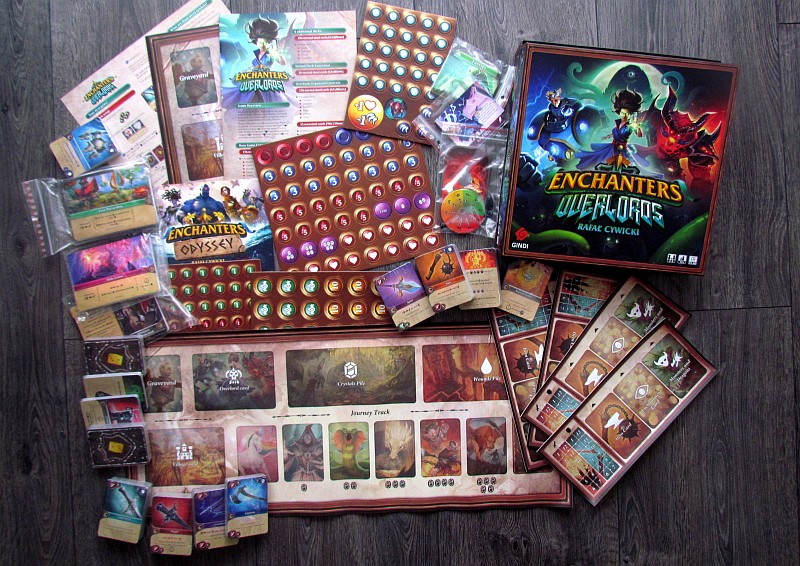 Humans are incredible creatures. They are able to get into trouble and in the most incredible situations from which they have no chance to free themselves. And that’s when they start calling for help. Their lament may be heard by some random tourists. And perhaps, they would bring the message breathless to the city tavern, where several seemingly unbiased characters sit around a table. And I am among them. I didn’t just get my fame for doing nothing. I’m ready to hurry up and rescue anyone who asks for it.

This is the profession, that awaits players in the game Enchanters, which was first published in 2016. But we got into the newer edition, where there is also hidden expansion called Overlords in the box. The author of the game is Rafal Cywicki and game was released under the auspices of Gindle.

The box does not surprise with dimensions, but the content already does. Inside there is a huge number of cards, that sign significantly on the total weight of the box. There are practically five hundred cards (of which more than fifty large) inside, a lot of tokens and a nice mat for organizing the whole game. But first we meet some heroic warriors against injustice on the lid. 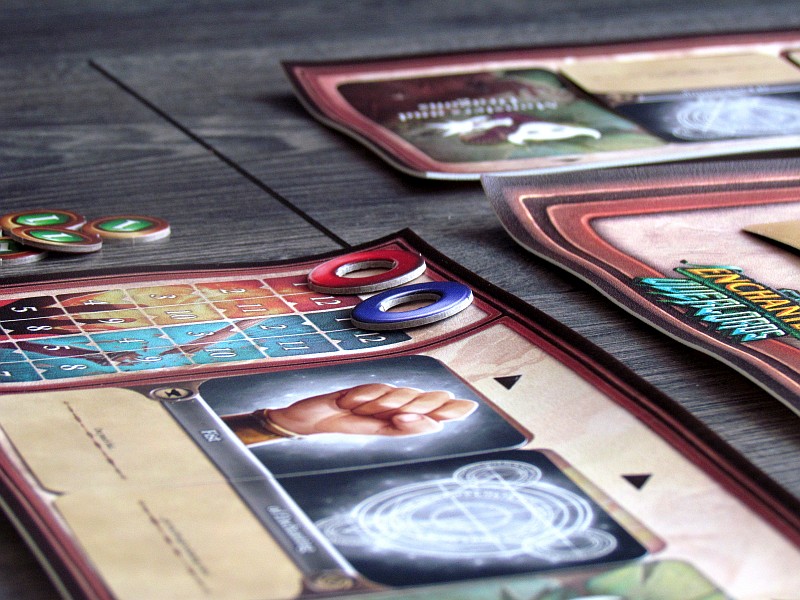 Each player gets five crystal tokens and a pair of starting cards – the first one is called Fist and the second one of Enchanting, together they form the Fist of Enchanting. Then, each participant gets an important task – picking a kingdom deck (or two in terms of duel) from the basic six (or, when playing with expansion) from other races (dragons, unicorns, golems, fairies, and more).

And all these selected cards are then shuffled together to create a pile of adventure. This must be rearranged so that the first few of them do not contain any monsters. These have to be placed deeper into the deck. The top six cards then create a start menu called a path. They also add one random village card to this lineup.

The players take turns in the game to choose from two main actions. The first option is to pick and take the card out of the way. Each of the cards in the menu, however, has a price, that depends on its position on the path. The card closest to the village (left) is free, but each additional card costs one more crystal to collect. And while some cards are only bought with the idea of improving their combat capability, others will want to fight with you straight away. 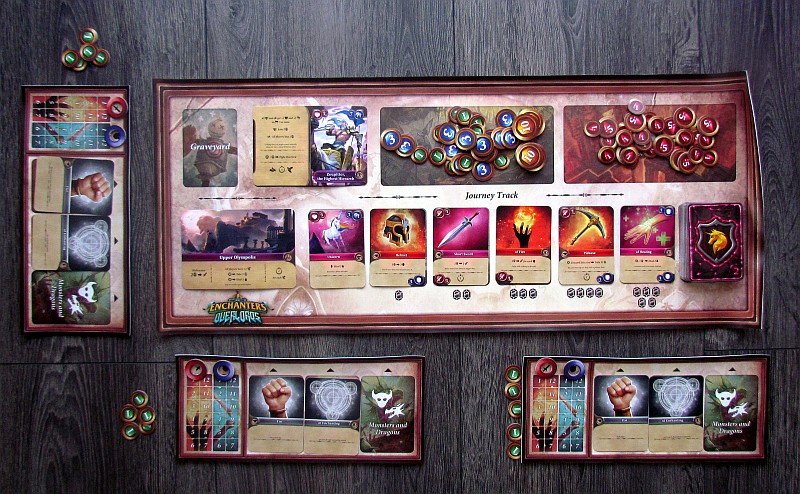 But they need to be really carefully prepared first. Equipment cards consist of two decks, in which the upper part is always covered, but the lower one with combat statistics remains visible.

However, if a player buys a monster from among the cards, he must have enough strength to defeat it. But every monster will reward its executioner with some point of injury. These are accumulated by the heroes, but there is no danger, that scratches will remove hero from the game. All injuries add up at the very end.

Instead of all the arming and fighting, however, the active player can also choose a much simpler procedure – he can rest, give up his turn and heal one point of injury. At the same time, it is precisely in this way, that a new crystal can also be obtained. At the same time, it also affects the supply of cards on the way, since it discards the one that is available free of charge. 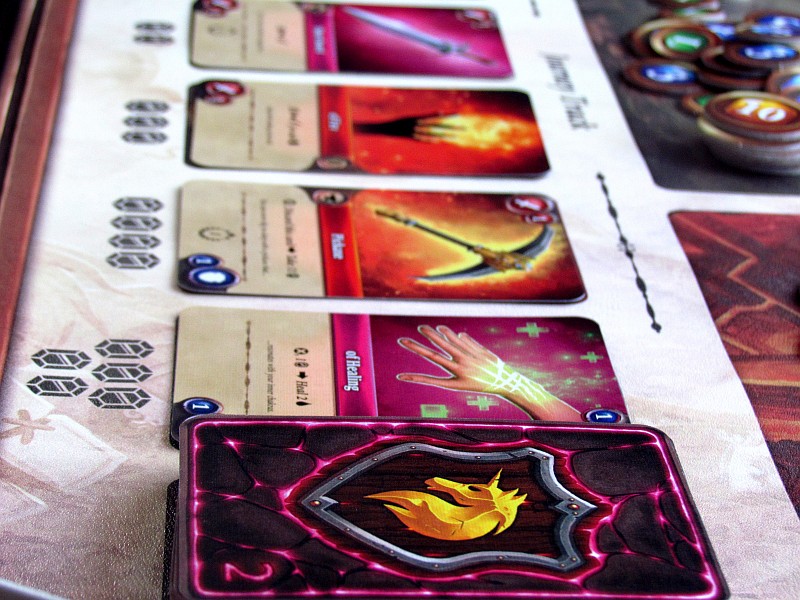 Gradually, players withdraw cards from the menu, immediately add new ones, and the game continues until this supply is completely depleted. After that, heroic deeds begin to speak because of the defeated monsters, but also the items. However, the player must deduct points for all injuries from his result. He who has the most fame points in total becomes the winner.

Enchanters is a surprising card game, that excels mainly by simple rules. It becomes an accessible game, which then unexpectedly strikes a huge variability. There is a lot of kingdom cards in the box tested by us, which in combination with various villages creates an interesting and constantly changing content.

Players in each game go through a complete range of cards, so in the end you will soon find yourself in a situation, where you have at least seen them all. But that doesn’t mean you had a chance to use them in various combinations. Assembling equipment is interesting, because it uses overlapping cards. So heroes always lose something with a new boost (it gets covered), and that is a nice feeling something-for-something. 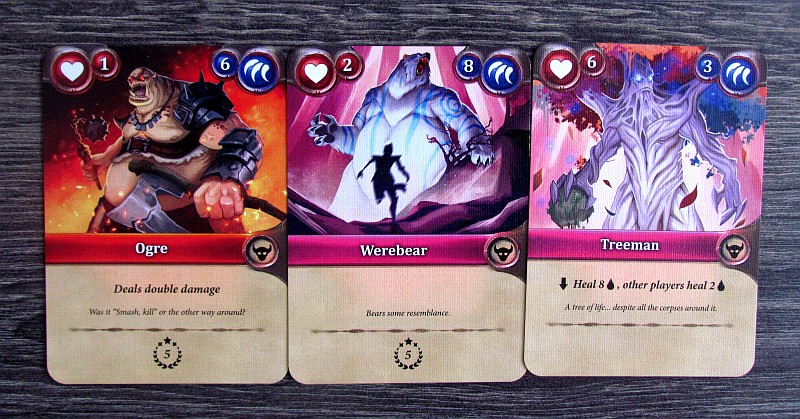 But expansion is not just about new race. The game also offers powerful overlords, who are pretty heavy and can deal a good dose of wounds. Players receive a new action, that allows them to completely move their path and instead invite the overlord to duel.

It is then clear, that within the abilities of the cards, there are a number of other smaller actions. Heroes can play them at any time and take advantage of them. Even the village itself offers some effect that players should not forget.

But the individual texts on the cards create combos, that players must be able to use properly. Only in this way can they crawl through as many monsters as Possible, while avoiding too much injury. A monster can defend himself against attacks by wearing armor, which reduces damage done.

Although it does not look like it, there is a lot of direct contact in this game between the individual participants. So if you are not a fan of attacking opponents or defending yourself against their tricky attacks, then you will not enjoy this game too much. But this interaction is an important element of the game, which makes it not just another uninteresting solitaire combat simulator.

The game is wonderfully fast. Although there are plenty of cards on offer, the fights and purchases are fast, so there is nothing to delay the way forward. Drafting from a fixed-offer table is also a great choice, as this system works great with increasing prices from left to right. And fits into this game very well. 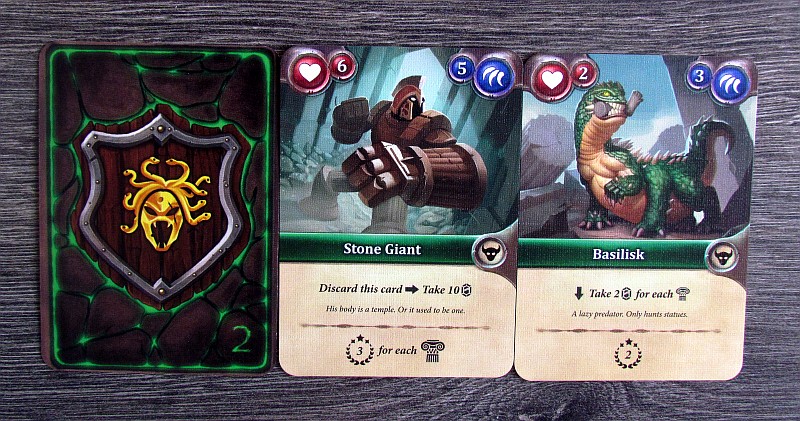 Unfortunately, the aforementioned simplicity of the rules is not easily transferable from the rulebook, which as new Enchanters players did not seem too intuitive to us. There is quite a bit of information about the basic game and some procedures have to be read a bit between the lines.

Enchanters is an adventure game from which you should not expect any depth or tactical options. Instead, you get a quick game, that is great for couples, but also for four players. Enchanters: Overlords in its new edition offers a flood of variability, conflicting battles and easy gameplay. It is a nice filler for half an hour. And that should be enough reasons for fantasy lovers.

There are not so many fantasy card games. The better news is, that Enchanters are now among them. We do not claim, that the game does everything perfectly, but it combines the content, so that it is fun. And that is what we want first of all. It is clear that low game time will not suffice, There are minor flaws, but it will not spoil the experience if you like to go rival ruthlessly against the throat. Enchanters: Overlords is a great game, that's for sure.

by Dušan on 24. 09. 2019
France. A country, that was full of magic and unknown just a few centuries ago. It was inhabited by demons and angels. And these moments will be our world [...]
Comments
Leave a reply