Review: Eruption – hungry volcano looking for a way to destruction

by Dušan on 01. 12. 2014
0
previous article
Review: Mansions of Madness - a scary experience
next article
Review: Whats He Building In There? - on your way to The Doomsday Machine
Contents 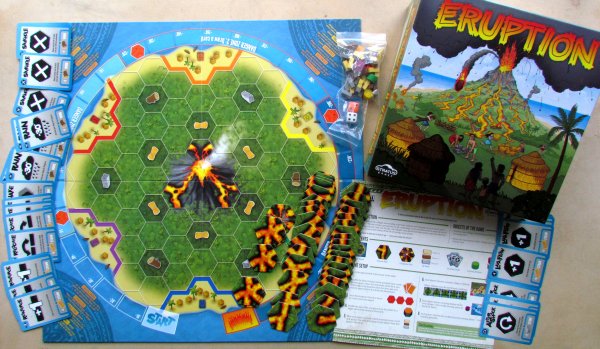 Tears were pouring into my eyes, when I saw our village empty. From a distance I can hear the hum. I am the last person to stay here and make sure, that we have not forgotten anyone. I looked at our homes, that no one will ever see for the last time, got into my car and I drive like hell. Hungry and fiery stream began to absorb house after house behind me. Who would say, that all the time we have dozing destruction right behind our houses?

The volcano is one of the most powerful natural phenomena on Earth. Fortunately, in addition to the victims of the disaster itself, there is also agency, that deals with protection against this blast. They can intervene around the world in a few hours.And we become their member in board game Eruption. Its author is Chris James (Diceafari – review) and it was published under trademark of Stratus Games with drawings of Andy Kurzen and Matt Plett.

Entire volcano and its surroundings were hiding in a surprisingly small square box. And while its lid is dominated by the hot volcano, it is still sleeping just below the surface. We find a hexagonal array on a folded game board, through which will lava from a volcano in the middle to six villages on its edges. People have nowhere to flee, because right behind them is sea. Round-island is wrapped around in a circle scoring scale and in each corner, there is a reminder of action sequence in the round. 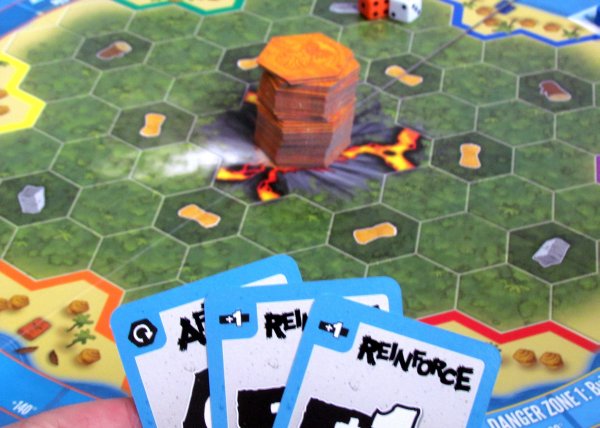 Box also has a hexagonal cardboard pieces, that easily fit on a random position on the board. Lava flows on their surface. Players will see their chance in 48 wooden walls. There are also six scoring tokens for players, two dice and 36 action cards, that give players two choices in separate frames (upper and bottom). Main upper one is marked not only by a big symbol, but also label in the upper left corner for easier overview.

At the beginning of the game, player must put game board between them on the table. Volcano waits quietly on it for a moment, when the time comes. And it is not far away. Players only place three eruption pieces side by side, while the other hexagonal plates are shuffled and placed nex to the map. Then, each player chooses one village, gets a scoring token in matching color, one wall of each type (wood, stone and straw) and three action cards from shuffled deck.

After that, island erupts into fiery hell. Players take turns and first start with unpopular role of the volcano. Its lava flows on and on, lower, towards their villages. That starting action means drawing out and attaching new hexagonal piece. It is necessary, that all the streams of lava connect to previous tiles, none can be left out. Placing new tiles is limited only by this, but otherwise player have no restriction by any sectors. Thus, they will probably place in on other side of the island, flowing towards their rivals. Their own village is the most important after all. 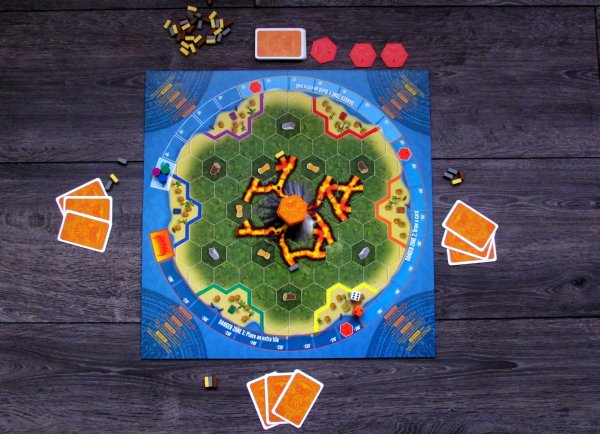 If its not possible to place piece, protector of the village may draw another instead. During the search, he publicly identifies the piece and opponents can participate in search and offer alternatives (although they will always draw attention to paths leading to other’s villages), which speeds up the gameplay nicely. Path of flowing fire will thus lead lava to player’s village or out to sea.

During the game, each of the participants gets more wall pieces, whenever he places a tile on few supply tiles located on board. Another way to get new barrier is to play an action card without effect. Each such card has small frame printed at the bottom, specifying type of wall for which it can be exchanged. But it also can be played at any time for its main effect or two cards discarded for opportunity to place second lava tile. A new card can be gained by bringing lava flow to boundaries of any village.

Walls are used by taking wooden stick out of player’s inventory and placing it on the lava flow, which player wants to prevent from further expansion. When another player then wants to continue with this river and connect another piece there, he has to roll a pair of dice, that determine, whether wall withstanded onslaught of lava in the last round or not. 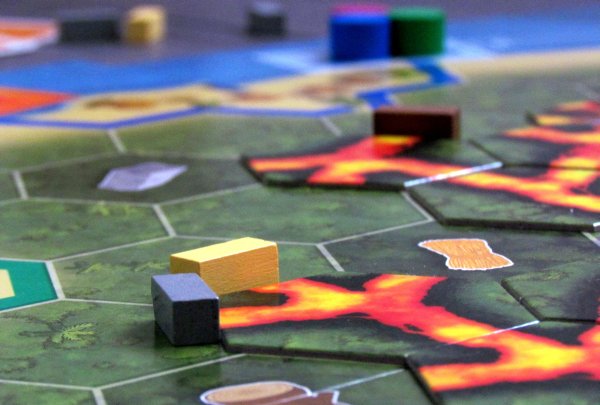 Lava is represented by a dice in hot orange color, wall is white dice. Player rolls them together and compares resulting values. Better walls get bonus (+1 wood, stone +2) to their result. In the event, that the fiery stream defeated barrier, player puts it aside and player may play a new tile there. For the opposite situation, he must search for a suitable location elsewhere. At least in this turn.

But despite all efforts, eventually comes a time, when lava reaches boundaries of some village. And here comes the thermometer in play, which is represented by a circular scale around the board. This is equivalent to reverse scoring scale, where points are punishment. For each stream of lava, which ends up at the border village, a player must warm up his home by ten to twenty degrees every turn. The value depends on whether there is a wall between lava and village or not. This increase in temperature is always happening at the beginning of a turn in the stage called damage assessment.

Game then ends, when either one village burns down or players runs out of lava tiles. In both cases, determination of winner is simple. Whose village has warmed the least is the winner of the entire flight from the liquid fire. 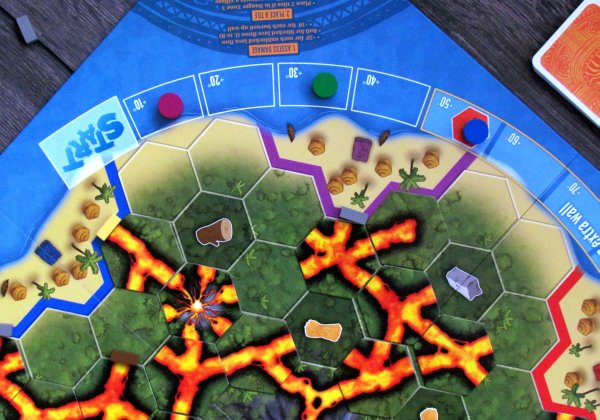 Eruption as the game is set apart from the competition (tile laying games) by its theme. It is unique and mechanism is also very atmospheric. Lava really flows from the summit of the volcano down and approaching player’s village.

But there are tools to at least partially avert its descent for a moment. Walls are main instrument of the game, and because there are three types, their chances of survival hungry against lava are different. All three chances are calculate by static roll of the dice. This game contains uncertainty in luck, which is good for theme, but may discourage some players at the same time, because even good plans can be thwarted by some bad dice rolls.

Very important are also action cards, that open the way to additional wall tiles, placing more rivers of lava or for other special actions. Now, these cards allow players to react to unexpected situations, move walls or do wicked things to their enemies. Nice! You have to use them deliberately, sometimes for defense, other times to attack. In doing so, whatever you do, eventually you will catch on fire as well all and you feel, that you really are on the island, where all life ceases to exist in a few moments. The overall atmosphere in the game is really good. 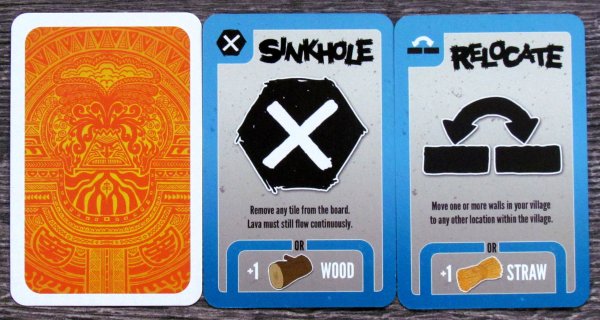 The game is really fun and it can be stated almost regardless of the number of rivals, who are participating in the game. Only exception is the duel, which is missing the crucial maliciousness and options. With the increasing number of opponents, amount of conflict increases as well, and protectors of the villages are more affected by the effects of the action cards. However, even in the two, game is very about rivalry, because you usually place tiles to opponent, trying to find a path for the lava or create a chink in his defensive walls. Higher the number of players increases also waiting for the next turn, because as situation is constantly changing, it is impossible to plan ahead. Time to complete it corresponds to moderately challenging game, ranging between half an hour (in two) and an hour at full number. And through this pitfall against opponents, it is still enough family fun, that even parents with children will have fun.

Eruption is a game, that we like, mainly because how it gives players tools to attack others. It really is leering and in many ways could be characterized as a simpler and quicker Survive (review). In doing so, it remains unique enough and is decided also a bit by coincidence. Eruption is very well done entertainment, that can burn its way into many collections.

Eruption is an interesting pastime, that lets you experience the second Pompeii and Vesuvius. On a secluded island, you need to withstand fire for as long as possible, so all its inhabitants are able to evacuate before hungry fire catches them. The players are not only placing wall into the way of lava tiles, but they are also build that continued stream. But its not easy to get new walls, so it's only a matter of time, before the fire arrives to the village and temperature starts to increase. And thermometer decides about winners and losers. Wall is consumed by lava, when dice decides. The game is very fun and pleasantly fast, yet easy to grasp for everyone. Opponents cut each other throats really fast and often in here. The only thing, that can be criticized are longer gaps between turns in more opponents. Eruption is despite this minor complaint an excellent game, that will entertain players, beginners and families.