Review: EverZone – aliens inside us

Our era should have ended long ago. Time of mankind was running out, and for a while, we even thought, that our race will be extinct. Fortunately, toughness allowed people to overcome our darkest moment, breaking away from Earth with changing climate and go towards the stars. Technology was suddenly within reach, when everyone pooled their forces. But there were another risks waiting for us on distant planets. Like we never imagined. They enslaved bodies of your friends and now, they want to take everything else from us.

We are alone in the universe. Our enemies are waiting for us to hesitate only hidden somewhere down in our weakness and our bodies. Such a thought is sent to us by Marco Mingozzi, author who created card game EverZone. It was published n 2014 under brand of WinterLair company. We got one copy at Spiel 2014 in Essen.

Game is hiding in the dark square box of medium size. On its cover is depicted all three sides coming to the battle. Uthrons, descendants of the human race, disfigured after long travel and hunger. Slurrs, parasites, that invaded human body and made it their own. And of course, people. Struggling as always on the edge of extinction, fighting with anyone for their future. 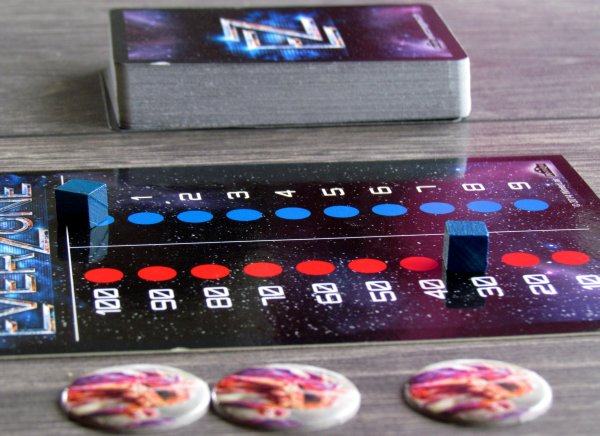 And it also reflects contents of the box, dominanted by cards. In total, there is more than 300 and are distributed fairly among all warring races. Unit cards are the biggest portion (210 and have printed offensive and defensive values and range. Belonging to individual families can be distinguished by color of the background, which can be blue, purple or beige. Location cards are landscape-oriented and have some numbers on their left side, showing rounds. Each row number are raw materials, that can be spend for units.

At the beginning of the game, players each create their own deck. They can choose from any of the cards according to their race, with the only restriction being minimum number of cards set to fifty. And also fact, that some characters could be in the package only once. All this is actually nothing new. Another element are leaders: cards, that player can choose only one for entire game. Then both players will prepare deck of locations with three basic with three more added by each player.

Player start with ten cards in his hand. They go through each round together and begin by revealing new location and draw back up to ten cards. On the basis of their hand, player can choose to discard and draw again, but he gets one card less. After that, the game continues to phase of sedning units on the battlefield. 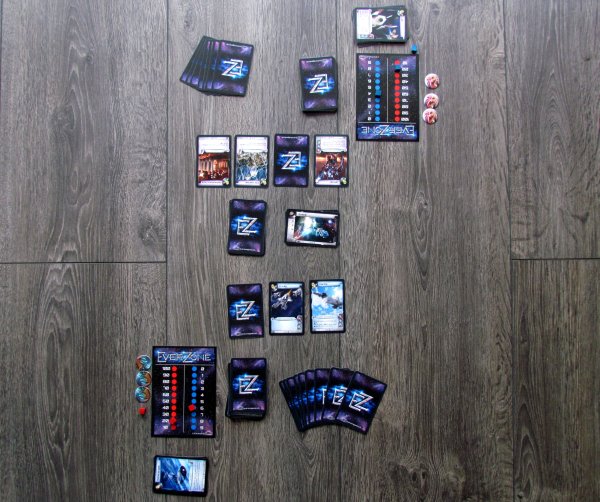 Now everyone simultaneously plays warriors, who he wants to send to the location, from their hand. These cards are played by both opponents face down for now. Any number can be played, trying to bluff, but players must keep in mind, that they realistically can sent into battle units, whose sum of values does not exceed limit of resources provided by location card. Both simultaneously announce number of cards, they want to activate (their decisions could change based on number of cards of opponent) and then both players reveal their chosen cards. Those, who were used to bluff, are left lying face down.

Time of war begins. First is attacking army, which has a higher sum of the green range values. Attacking player checks, if sum of his offensive red numbers is higher, than opponent´s defense. In this case, its end of the battle. If not, defending player has chance to answer and return opponents attack with his full force.

Successful attack means, that all slain troops are moved to the fallen deck. This unit will remain inaccessible throughout rest of the game. Additionally, losing player gets injured equal to difference of defense and attack. 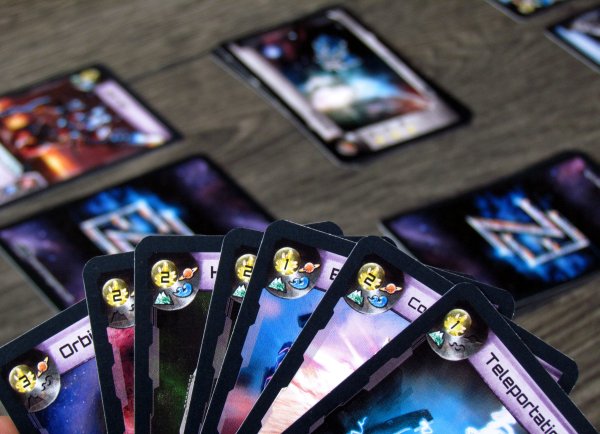 Duel in current location continues by drawing cards back. Played and units alive remain in place prepared to continue their battle. And so long until players have completed prescribed number of turns in that location. After each battle, losing player may also decide (at the cost of injuries equaling half of opposing force) to withdraw.

After each match (ie, several rounds of fights) players put their remaining cards in the discard pile. They can be used again, when drawing pile runs out and differs from falled pile, from where there is no coming back.

You are probably wondering about, where those already mentioned several injuries go, when they pass through units to the players. They have specified number of command points since beginning of the game, which can determine length of the game. Match may end prematurely, if there is only one player left in the game. Otherwise, battle lasts until the moment, before final location card is completed. Winner then becomes player, who remains standing with the most command points. 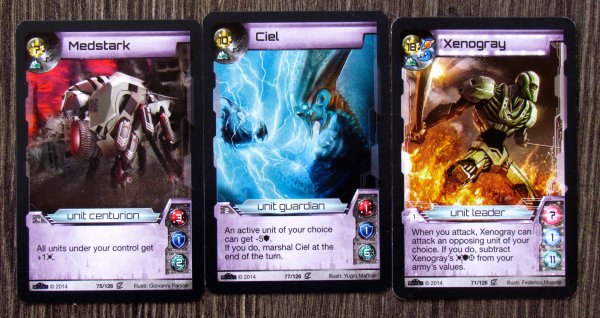 EverZone is another card game, in which everything begins by assembling your own deck. Players must first honestly get acquainted with their race cards, so they can properly combine cards. At the beginning of this gaming experience, it is not as important as when playing against advanced players.

Basis is bluffing and playing cards hidden before battles. This means, that you never know, how the battle can finally end. But unfortunately, it can be perceived, that players have virtually no control. Their chances can be affected only by playing cards of support after the revelation of units. Only this way can they eventually outsmart luck, at least a little.

Unfortunately, all the fun is killed by imperfect rules. They will not tell you lot of things, and once you start playing, you will be swarmed with unanswered questions. So you will have to delve into the forums and search. This applies especially to game in three opponents, which is specific. Fortunately, there is FAQ document available for download, that will answer many uncertainties (its paradoxically longer than original rules). EverZone is otherwise designed as an asymmetric battle for the two sides of conflict, whether it is one-on-one or team battle. 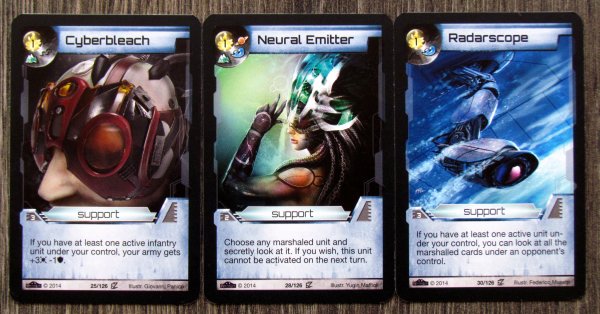 Just because of this, you get rather negative feeling of the game, before you really try it. If you sacrifice the time and effort to resolve any question marks, that could cause you to play badly something, you will find, that it is a solid card game.

Of course, as with other games, even here are waiting for you possible combinations of cards to be discovered and searching for combos is fun. Players at the same time must remember their leader, and just try to take advantage of them each match.

Game often ends with a loss of command points. Length really differs significantly and at the lowest possible setting with ten points allows playing game in half an hour. Hour is reached, when you double this figure. 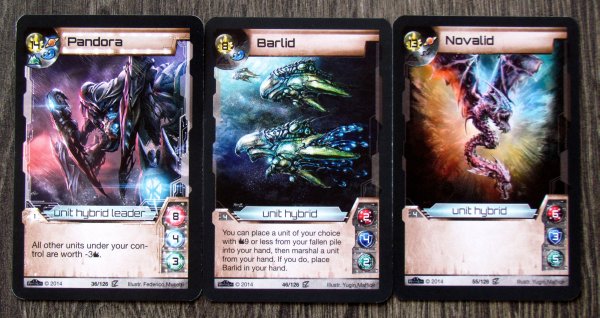 The greatest weapon of the game is its sci-fi theme, that tries to go against tide of fantasy games and its doing it well. With beautiful illustrations, that are really good and are pleasure to watch. Their design is transparent, so in terms of processing (with exception of rules) is there nothing to complain about.

EverZone is quite interesting and fun card game, in which, however, luck plays a very significant role. Because players plan all their cards face down, you can not really plan anything. Compared with some of the LCGs (Living Card Game), this is little out of place. But despite not quite perfect rulebook, you will be into this sci-fi fun. Based on its looks, you will expect EverZone to be breathtaking experience, but you get “only” average game.

EverZone is a card game, that lets you put together your deck first and then release your units into the sci-fi battlefields with other races. These are somehow evolved from humans, so the game has an interesting atmosphere. But this all is disrupted by luck, because players play their card secretly and together reveal them. So it is not possible to respond to opponent and fights are based a lot on luck. Influence is done only by playing support cards. Game time is adjustable and ranges within reasonable limits, mainly because game takes place mainly in two players. Experience is saved a little by nice graphic design, but game is pulled back to average by rulebook. EverZone is ultimately solid, but only an average card entertainment.