by Dušan on 19. 06. 2014
0
previous article
Review: Ark & Noah - we'll be safe on water
next article
Review: Sonne und Mond - when the sun sets and the moon rises
Contents 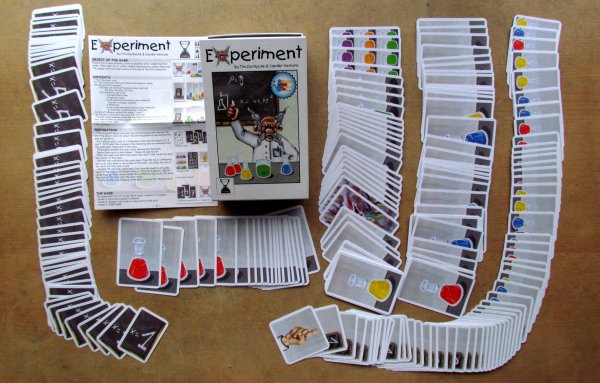 You’ve always thought, it was just a rumor. But they have finally found the proof. Secret experiments on players really do exist. They revealed our weaknesses. To make sure, that the game will entertain us and introduce to us in a form, that you can not say no to. There are formulas for it. Attracting a player’s attention is the whole science today and each author is trying to mix his true and genuine cocktail of fun with a little bit of certainty.

And so began our attention to card game Experiment, when we were at the fair Spiel 2013 in Essen. It comes from the heads of Tim De Rycke and Sander Vernyns and was printed by Belgian company Sand Timer. Illustration of the game were developed in 2006, when it was first released, by Kenneth Van Bogget.

Inconspicuous white box with a bearded professor (one of the authors preparing their magical potion?), who faces a bottle with different colored liquids and behind him the blackboard scrawled with arcane formulas. Figures, that apply to mice, but players can be immune, so it’s good, that we had the opportunity to test it properly on ourselves. 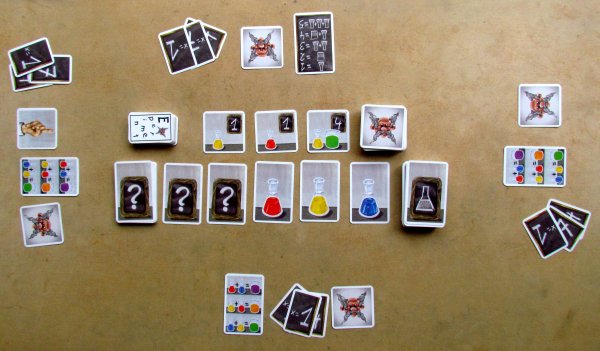 Ingredients inside are made of a total of exactly 200 cards in variety of shapes and contents. Base is of course lab cards, where you can find a bottle of primary chemical colors, but also secret vials with secondary colors. You identify them apart without problems according to their back side.

Another group of compounds consists of 75 task cards, that demonstrate various bottles and a score in the upper right corner. Influence cards are important for players and their values are in range from one to seven. There are also help cards and one to mark starting player.

Each player gets a set of three cards of influence on the values 1, 4 and 7 and one randomly drawn card with task to start the game with. Players create drawing deck of the rest compounds and reveal top three as an offer. Laboratory cards are shuffled into two separate packages and several cards from there are revealed (in case of secret laboratory cards face down) into the center of the table, depending on number of players. 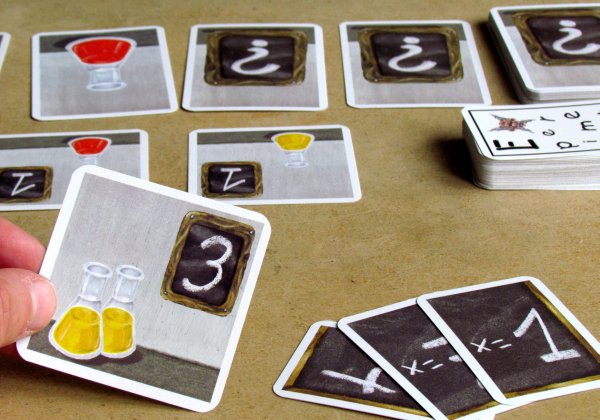 Entire game takes twelve rounds to complete. Each of these circles will be completely gone through by players in three phases together, starting by determining influence. Combining the effect of cards from the deck together with one picture from the hand (played secretly and then revealed at once) determines, who can look at a pair of secret laboratories cards in the middle.

At the same time, these values also determine order for the next phase, as the player with the second highest influence continues to play and he can choose any card from the middle of the lab table to keep for himself. He puts it in front of him. If he draws a card with broken bottle, he must discard another lab card, that he already owns or in case he does not have any, the first he will receive in the future! In event of an explosion (other card), all players must discard one card. Once all players complete this, the last player becomes new starting player. That will be useful in the next stage, which is completing formulas (tasks).

Players must have enough cards in front of them in that specific combination, so they meet their secret goals hidden in hand. In the game, both basic and more complex colors can be obtained either as a card or can be combined from the basic components. All the used vials are discarded and player places his fulfilled card in front of him. Laboratory cards in the middle are replenished and game proceeds with next round. 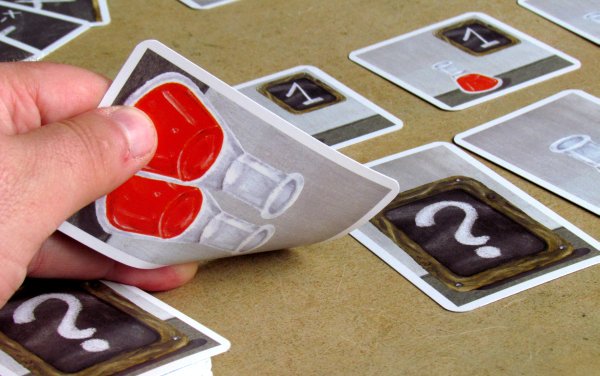 Fight ends, when players have played at last twelve rounds. But they are not forced to count these rounds, because game end is marked by secret lab cards reserve getting empty. Players add up the victory points for their completed compounds and winner is the one, who collected the highest amount. Only he gets a chance to work on a new formula for addiction to board games.

Experiment is a simple card game on creating the right combinations. Authors actually reached for exactly that topic, that would first go into your mind, when completing and combining colors is mentioned. Lets remember for example Pastiche (review), which also mixes colors, but in a more subtle way. Mixing compounds into better and more valuable creations was also presented by russian card game Potion Making: Practice (review).

It is therefore clear, that in the case of Experiment, there is nothing radically new going on. At least on the surface. But we also have to keep in mind date of publishing, when there was not so many collection games as its now. In addition to the basic mechanisms, we all know, game offers two important elements, that push it into a better, than average light. First of these two are cards of secret laboratory. Players can gamble and take one of them. But instead of help, they may find also danger in broken bottles or explosions, that may hurt them quite enough. 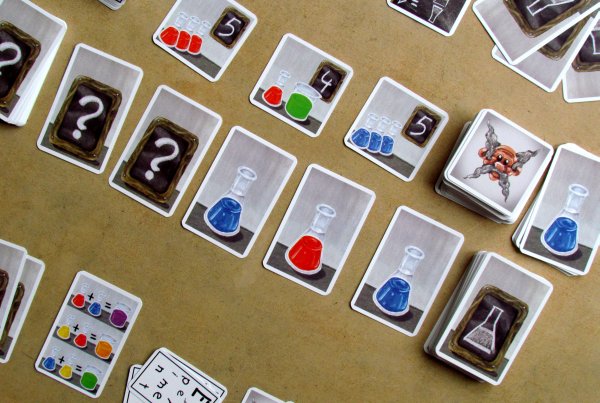 Voting for influence has surprisingly crucial role in the game. It is designed in a very sophisticated manner similar as if players were rolling the dice, adding result to a single card. Here, they must combine one card from their hand with randomly rotated one instead. It is up to them, whether they choose the risk of hidden cards or go for certaintly with cards dealt openly. In any case, excess card can you keep until the next round. So you can plan it all well.

Unfortunately, this phase is nice, but it does not fit into the game thematically. We can not imagine, how is this mechanism supposed to represent real scientists vying for ingredients in their laboratory. But it is just such a sigh, that affects the atmosphere rather, than towards course of the game. Game itself basically has no atmosphere and you are very well aware, that you are only collecting cards.

Game in this concept remains random only with this effect, which may decide order without player having some influence over it. Therefore, rules include more strategic variant, where players have their own set of cards, dividing their influence between turns. Each may be used only once and whole pile is taken back only at half of the game, when all six have been played. We like this version better, because it does not contain so many coincidence and bad luck can not affect your chances. 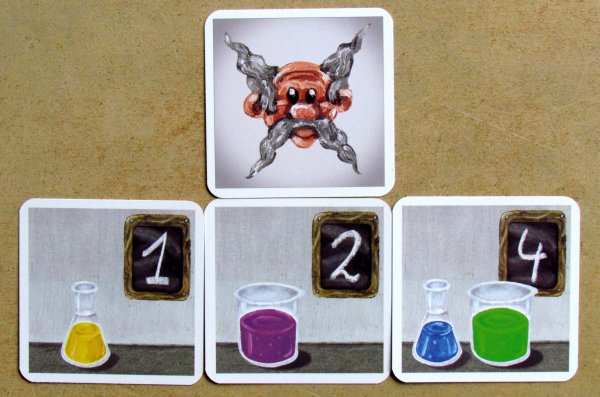 Game is fast exactly as you would expect in such genre. Due to influence decision-making, authors do not recommend playing it in two, but it works quite solidly even in that number. Experience has yet to improve with more and more players participating in the game. There is not so much waiting between turns to get you discouraged, while battle for the lab cards is much more exciting.

Graphic design is too simple and does not deliver it for us. The good news is, that authors made a number of minor expansions, that further improve their game a lot. They hide in small card boxes and we will look at them together again some other time.

Experiment allows players to collect sets of cards. In addition to classical mechanisms, we can find several small innovations, which are enough for this game to entertain you. But still there is so much other games like this, with set collection, that it only depends on whether you had any similar in your collection. If not, then it is good news, that Experiment is a fun game, that will delight and entertain you with its speed and smooth gameplay.

- basically its nothing new
- atmosphere is lacking
- too simple graphics

Experiment offers players to take cards with chemical stuff and mix them into better and better compounds, which provide points. This does not sound new in any way and the game does not offer nothing, that was not there before. But we must take into account its year of publishing, which goes back to year 2006. That was the time, when offer was not so wide as its today. Given this, we simply cannot deduct points for originality. On the contrary, it still offers some mechanics, that can seem quite interesting even today. In first line is a two-edged influence choice, when players can rely on luck or certainty. Luck is altogether not present as much as you would expect, because many things might be influenced by players. Thanks to this, Experiment offers nice fun for beginners, which will not mind simple graphics or lack of atmosphere.