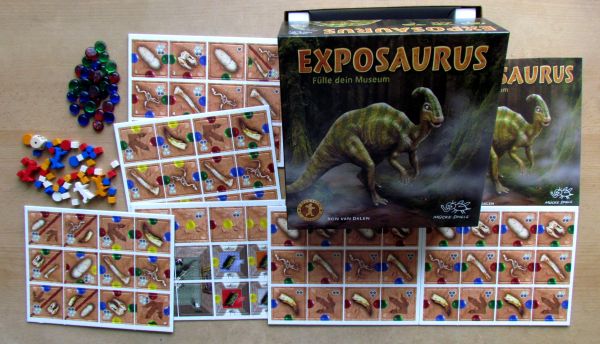 Dinosaurs does not live in our country anymore, but they are still there with of us. At least through their bones, buried deep underground. It is not easy to find a complete dinosaur skeleton. If it is found by an archaeologist, museum is willing to pay large sums of money for it.Surprisingly, their currency is precious stones .. But for each of the sites, there are more teams competing and it’s up to you, if you will be a member of the winning one.

That’s how it goes in board game Exposaurus, we had the opportunity to test and today, we’ll talk about it deeper with you. Game was devised and completed not only in field of desing, but also graphically by Ron van Dalen. It came out in Germany in 2011 under the auspices of Mücke Spiele, who also created good AstroNuts (review). Exposaurus has an interesting history, because it came from a competition taking place between years 2009 and 2010, and is not creation of any experienced author. But this goes for Mücke Spiele as a general rule.

Box of Exposaurus works well and you definitely do not get impression, that this is a work of inexperienced author. Brown lid contains picture of a dinosaurs and with it, you enter the world of archaeologists. Packaging contains 64 basic excavations tiles, which are the most important parts of the gameplay itself. Another squares have the theme of the museum – four together depict one large room of the National Museum and you need to combine them to for one big square. 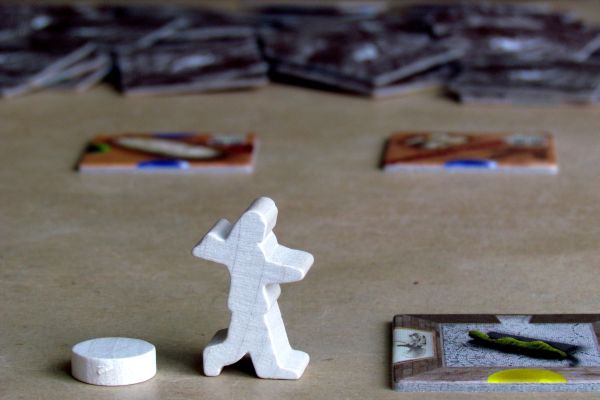 Remaining four tiles, however, are in player colors and are small, local museums. You get even one wooden token in player color, one paleontologist wooden pawn and ten scientists (= cubes) for each player (ie forty together).

Yet there are also common 36 diamonds available in three colors, which are identical with semicircles on archaeological tiles – blue, green and red. We have not mentioned only one dice and of course rules written in English.

Exposaurus game begins by each player choosing a color and taking all the objects in that shade together (card of museum, scientists and one paleontologist token). If you feel, that you should also have taken some colored diamonds, it’s not true. They remain peacefully in a bank, and so far you can can only watch them longingly. Moreover, in the game with less players, you do not use them all (for example, in two only 6 of each color are used, exactly one half of total number). Beside them, you also assemble National Museum out of four tiles. This is empty at beginning and waiting for you to supply it with interesting findings. 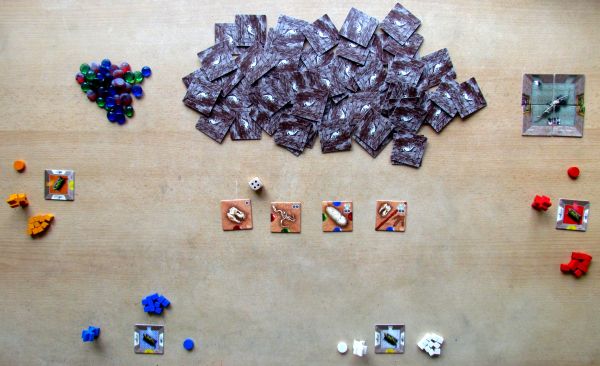 Each player gets one starting tiles. You will recognize it easily, it has number ranging from one to six in its left upper corner. Because it is different, you can choose it at random. In the middle of the table, you create menu of other tiles, that create commenced excavations.Players can complete them, if they send out enough scientists there. Their number at the beginning of the game is determined by number of players participating in the game.

During the game, players simply collect diamonds, which they get for the excavated pieces put in their local museum. Each color is evaluated separately, but we’ll get to that later. At the beginning, you need to know first of all, that your move is composed of two or three phases. Their number depends on, whether you are playing with a dice variant. This should always be used, when playing two players, otherwise it is up to the players will.

If you are using a dice, players can with it remove some expeditions from the game. He can select any of ones, that have not been completed, but somebody began work on them. This means, that they are located in the center of the table and not in player’s museum, where travels successfully raised bits from all the country. 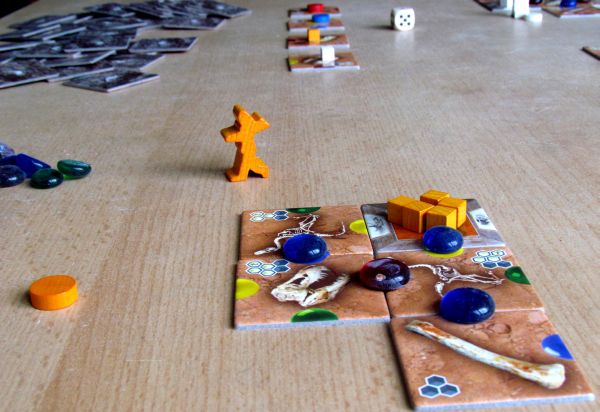 Rolled number represents maximum interval, that can be removed. It is written in the upper right corner in a form of number of printed white and gray bricks. Their value is also price, you must pay for their playing, as you’ll see right now.

In the second phase, you can summon all your scientists working in the field back to your camp. However, there is not choice – you must always call all of them, regardless of where they are. They can be scattered on tiles in the menu, but also in your museum, where they accompanied their findings.

But every return, although it opens up new possibilities in the game, is linked with one unpleasant thing. One of your experienced scientists must succumb to temptation and leave to work in the National Museum. You have to move one cube over there, and it will not be available during your future routes. Therefore, it is good to do recruitment only in extreme situations, where you have nobody to send out on expeditions anymore. 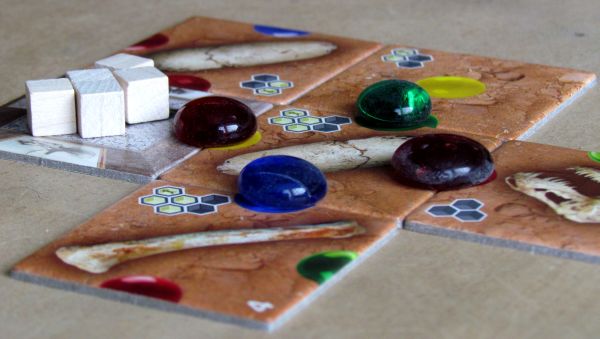 And now we’re finally at the most important action, which is expedition. At the beginning, you have to make one new discovery and begin excavations of it. For this purpose, you turn one of hidden tiles in the bank. Now you have a choice to put one of your scientists or a round token, which can be used only once per game. Such tile is locked and no other player can finish it or even remove it with dice. In the event, that you send scientist there, you also decrease number of people necessary to complete it. But not only for youself!

Now you can, if you want, complete an excavation from all commenced ones, including the one, you have just discovered in the previous phase. You simply have to send enough scientists of your base to pick up the bones and ship them right to your museum. You can use the paleontologist for part of the work, who is worth more workers. But like round token, also this person can only be used once per game.

This picked up piece then have to be attached to your museum. And this is place, where tactic is gaining momentum. On each excavations piece, there are four sides with colored semicircles (or empty) indicating colors of diamonds. In your museum, you are trying to play the piece, so that they create a uniform circles of the same color. For each finished circle, you will get one diamond of corresponding color. In the case of the yellow dot, you can choose any available color for yourself. Simultaneously, however, its important to take type of dinosaur skeletons into account and try to connect them together. It will then pay off real nicely in the final scoring. 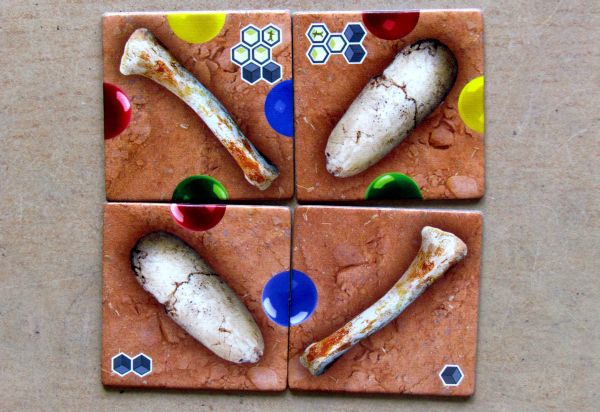 But your museum has limited space. You must not have more than four tiles in both rows and columns, creating a area of 16 tokens (15, when you do not count starting museum piece). This means, that you need a lot of careful planning, when placing each of them. You have to leave as many options opened as possibel for further course of the game.

Your personnel, who worked on excavations, accompanies their work to museum and there it nourishes it, until you call them back. Worker cubes thus remain lying on the tile in the museum, until you summon them back to camp with recruitment action. In the meantime, you’ll have to make do without them, but because you only have a dozen scientists, they will not last for too long. With time, their number will diminish as they will be leaving for fame and disappear into the National Museum.

And that is all. You simply transmit scientists to discover new sites and pick up dinosaur bones, until one of the player’s museums is full. Then it’s time to count accumulated points for diamonds and connected bone types. 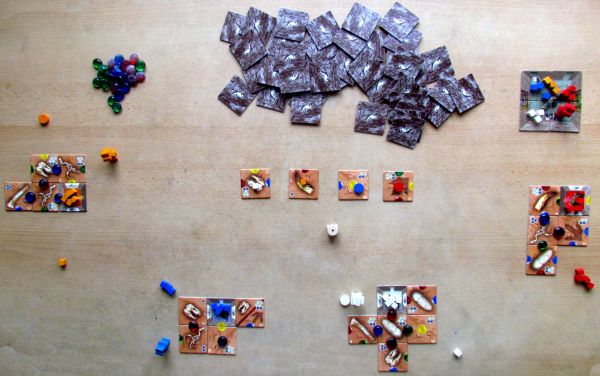 To do this, you divide colored diamonds into groups. You get final points by multiplying groups of your colors with one of the groups of same adjacent skeletons you have in your museum. You can choose, which group you multiply by which diamonds count. After adding bonuses for remaining scientists, you get final value to determine the best archaeologist.

Exposaurus is a game, that combines tile laying element, with sending your workers to do their jobs and their optimization by returning them back to you only, when you command. This actually brings together two popular elements of board games and unobtrusively connects them in a simple and fast fun.

Players must optimize their turns. Foundation for success lies in being able to withdraw your scientists in the right time and use two special options, which can be activated only once per game. Its only you and good ability to organize distribution of tiles in the museum are right way to victory. 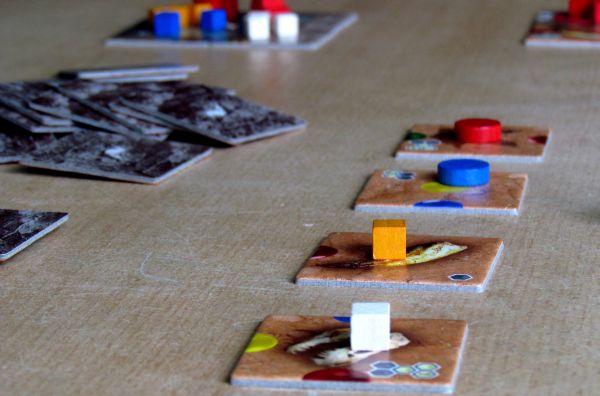 Because the size of the museum is limited, it is difficult to keep same tiles together. There are also two goals in the distribution of tiles, which makes it even more complicated. In addition to the immediate profit in diamonds, at least just the same importance has also, what is drawn directly on the card. According to this, you can also choose your future expeditions.

But it is very likely, that your rivals will try to get them too. Luck determines, who will have a chance to buy them first or book it with his token. If you uncover a good tile and do not want to use your lock token, it will probably not be there after your opponents have a chance to play. And you will even help them get it with one of your scientists, who has to be sent there as a guard from robbers, when you discover it.

Although we can not think of anything to strongly criticize about Exposaurus, there is really also no special experience to highlight. It is a simple strategy game, that does not deviate from the line of other worker-placement, tile-laying games.

Actually wait, there is one thing. Variant with rolling the dice adds a little more tension and interaction to otherwise slow and not too conflict game. We are playing with it a lot more often, than we should accorgind to rules, although it adds a little bit of luck here and there. But unfortunately, even with removing of uncovered pieces, there is nothing to raise your appetite enough to make Exposaurus into some exceptional game.

Exposaurus is a board game, that can entertain you. Be sure, that you have to work a little with your combinatoring skills to get a win. But all it has to offer, was here before somewhere else, created in a better fashion. Perhaps, only dinosaurs topic (popular to children) can persuade you, or your dream – you always wanted to be an archaeologist..

Exposaurus is a board game, where you will dust and dig dinosaur skeletons out of ground. During each turn, there is several expeditions available, each with remnant of some dinosaur creature. And you are trying to gather and keep these bones for yourself, using your archeologist. This makes your museum collection rich and that’s the whole point. But for visitors, its also important, that bones of same kind are in one place and not scattered all around. There is also important influence of diamond color in scoring. You get these precious stones for correctly adjoining tiles in your limited museum space. These tile parameters bring you many tough moments and decisions. Both have large influence over your final victory point count. Game is tactically nice, tough and if you miss a little bit of luck, you can add it. Unfortunately, there are some issues with processing, because diamond stones crumble and dust from them gets everywhoere. Exposaurus is not a special game, but its fun and that’s the whole point.