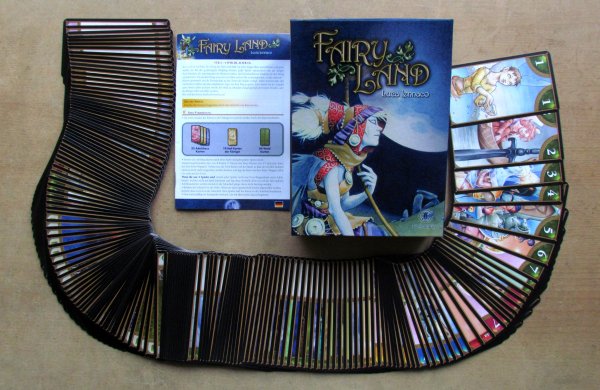 Welcoming must be absolutely perfect! Ever since the king enters his courtroom, he must see only more and more surprise. First after his entrance will be flowers falling to the ground. But not just any flowers, because after the fall, their will root and create a smooth path to the throne. Along the way, not only all the fairies, but also the animals from the surrounding forest will bow to him. Each of them brings a gift. Next to the throne, there will be waiting his family dressed in ceremonial uniforms of beautiful flowers. I just hope, it all works out and evil goblins will not thwart our celebration..

About land of the elves, fairies and goblins tells the story card game Fairy Land, which was invented and created by Luca Iennaco. His thoughts were caught by Lo Scarabeo, which issued Italian edition. In partnership with Elfinwerks, they also prepared the English version. Both were published in 2012 with illustrations of Mara Aghem and Andrea Malgeri.

In a small blue box with image of a fairy, you will find two decks full of cards. But they are not just of any size and are more portrait-oriented, than traditional cards. They have thus narrower and higher impression, than we are all used to. According to the back side, you will discover not only 84 forest cards, but also nineteen yellow cards of royal court (they are twice in a box, once for each language) and then 32 cards of fairy clans. 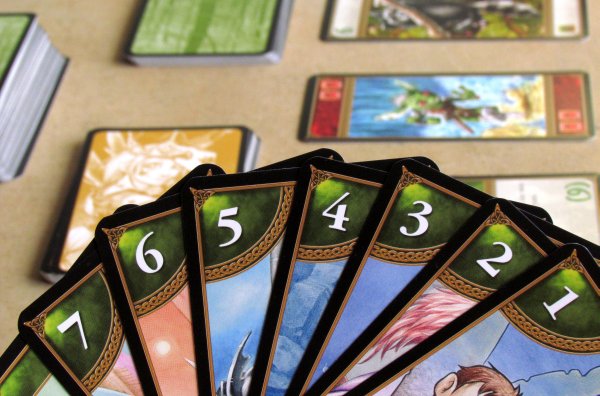 Families are also divided according to their color on the back to decks by eight cards. Each house has its own individual pictures and cards have each given it point value in their left and upper right corner of the card. There can be also flowers, animals, as well as enemies found on forest cards. All cards of this environment is connected by top and bottom of the cards, that represent requirements or options. For example, you will find the number, that shows how many of this particular animal live in the forest, but at the same time also, how many points will get you, if you have majority of them on your side at the end of the game.

Each player now selects one of fairy families and takes all eight cards. One of them contains coat of arms of their family, which should they put it front of them. Remaining seven cards with numbers are taken into hand. From a shuffled forest deck, you take nine cards and put them face down to form a druid pile. Remaining 75 cards creates a drawing pile near the first one. You randomly select nine royal cards and put them shuffled in the middle of the table – other royal cards will not be used in the game. At the end of preparation, you rotate three cards, that represent three clearings, you can visit.

Players take turns. Each turn is divided into three phases, each of which must be progressively evaluated. Dawn must happen at the beginning and during it, there always appear some new objects of interest in the clearings. Two new cards from forest deck expand current inhabitants. Active player can choose, where he puts new cards, he has drawn. The only restriction is, that the monsters are not very social creatures and they try to avoid other goblins or orcs. 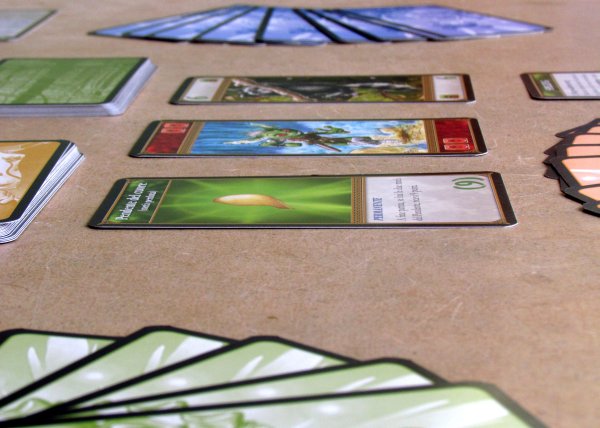 Sun is then suddenly shining in the sky and the day has started. Because it is a long day, active player has choice of four different activities. He can choose only one of them. Most important is the exploration of one of the clearings, which can be chosen at his discretion. Now is the time to fight with other players for the right to explore. Winner of the auction will pay his bet in fairies from his hand and takes all the cards currently located in the clearing, which he takes and puts face up in front of him. Exception is the new goblins, which are added to player’s hand and orcs, he wants to avoid, because it cost discarding of two cards.

For their action, players can also visit queen, who wishes to provide her help to them. But is it necessary to pay for it with fairies, whose value also determines number of cards, from which a player can choose (he draws as many cards). He can keep only one item, that gives him a special ability, put it in front of him and it can be used later at cost of another action. Similarly, players can activate power of their coat of arms, which allows them to take all played fairy cards back into their hand.

Last option to use during turn is a visit to the druids. Players also have to pay for it with fairies, but this time, unlike visit of fairy palace, player chooses from the druid deck, which was formed from forest cards at the beginning of the game. 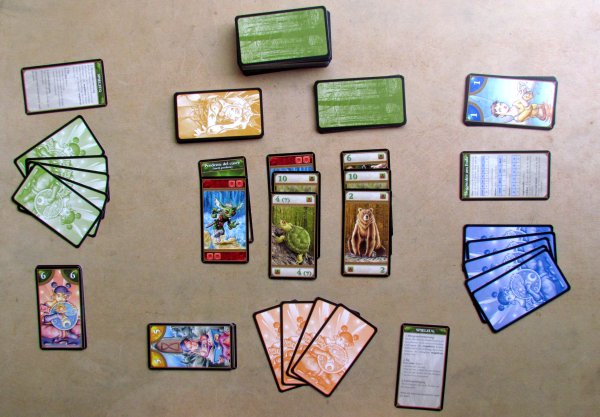 When the day tilts towards end, a sunset occurs. It is necessary to empty clearing, if there are six inhabitants or more in it. These cards are immediately moved to discard pile and game continues. Game ends, when entire forest is explored and there is no card left in a drawing deck. Players can now sum up points for animals of particular species, where they have the most of them. In addition, all plus points for the flowers (according to their number and diversity), objects and fairies in hand. Acquisition of goblins is the only reduction of this amount. Player with the highest score is winner.

Fairy Land is easy card game, that combines collecting sets of animals and flowers with auctions in an interesting way. It can perfectly mix development of the whole game and occasionally you will be really surprised by results of specific auctions. This makes is difficult to explore particular clearing and get it for yourself, because sometimes price can rise above your capabilities.

Simultaneously, it excels in combining of aforementioned majority with interest in various types of cards. Each player has a chance to get any clearing for him, when he has enough fairies at his disposal to send there in auction. And hope, he will not get beaten by players, who are bidding after him. 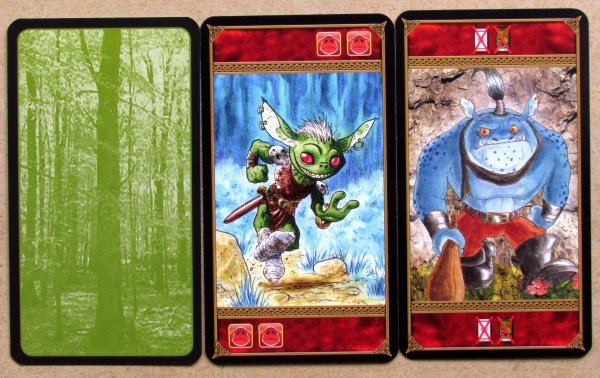 Most important remains managing cards in your hand. Nothing makey you more unhappy as the moment, when you would like to get a great clearing, but you do not have sufficient amount of fairies in your hand. During the game, players can also get bonus fairies, that will boost their options and help them to fight with rivals.

It is important to always consider, if you have a chance of winning auction, you are starting. Otherwise, you will lose your entire turn for nothing and even help some of opponents to get rich. Sometimes clearing price can rise so suddenly, that you are suddenly not interested, as other players bid too much.

Equally important is also planning actions to allow to take played cards back into your hand. Even this action costs you whole round, is thus has to be well planned. On the other hand, you extend the possibilities of your few future turns and makes you more competitive. 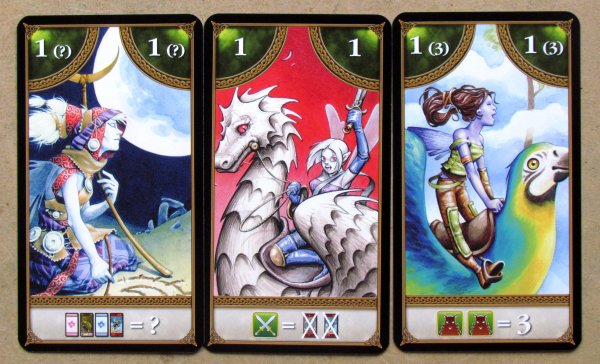 The game is very contact, because rivals have common goals, but different ways to get to them. In addition, cards obtainable from queen offer very interesting capabilities. Fairies also have a special abilities themself and these can be used. You can see, that the game contains a number of possible game tactics and ways to fight for victory.

This card game, although it takes a surprisingly long time to complete, more than usual half an hour, you will enjoy great fun during this period. Most of the time, all players are involved, because the auction and a changing clearings require constant attention. Since auction serves only as a supplement, game is excellent even with two adversaries.

The only complaint thus is directed to scoring animals, which operates on base: all or nothing. There are no levels of points, that would reward other players in order for their efforts. It is this rule, that can be described as the most significant shortage of the game. 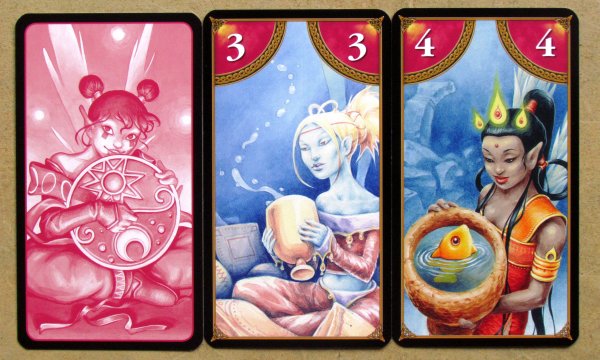 What is really valuable for entire game is its graphics. Beautiful pictures accompany you on all cards and emit incredibly fabulous atmosphere. Illustrators Mara Aghem and Andrea Malgeri deserve a real compliment, because their work feels like fairytale.

Fairy Land is a card game, that will surely surprise you. It has a beautiful illustration of a fairy tale theme, but still offers quite a profound experience and plenty of tactical options to keep you in fairy arms for a long time, even more demanding players. Yet it works beautifully as a family entertainment as well. This game is one of those nice card games, that should be part of every collection.

- all or nothing scoring

Fairy Land is a simple card game, in which your are trying to acquire a majority share over some images in the game. At the same time, you must not forget to collect other objects, which can also bring a nice point gain. During exploration, you need to bid fairies cards, but no one promises you, that you will really get to look at the clearing at all for the cost of your action. Auction takes place for chance to explore. Players must work well with their cards in hand, because every time you want them back, you have to sacrifice whole round. At the end of the game, numbers of animals and plants players collected are evaluated and points are assigned accordingly. It's just a shame, that only one player, that has a majority gets all, while all other collectors get nothing at all. It is a pity and destroys any sense of rewards for your effort. Fairy Land but even then, also because of its beautiful illustration, keeps a family touch and remains a game for all, that should not disappoint anyone, who likes to bid.