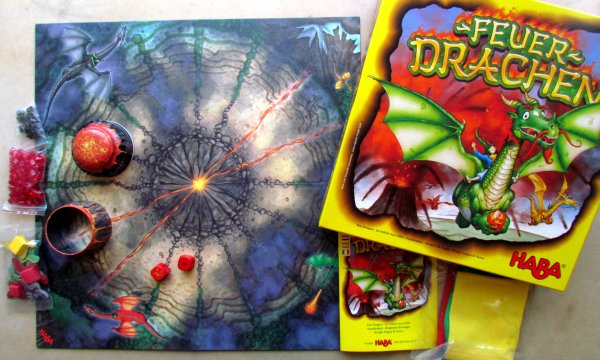 Tomorrow, it will start to rain. But it will not be just any rain. Volcano in the neighborhood decided, to cast its shadow over the world and cover the Sun. Most people left their homes and fled to safety. And yet, there is few of us left. Behind each our house, there is a nervous huge green monster. Dragons are uneasy, but we are not afraid. We know, that this is not an ordinary shower. When you fly into it, you will not get wet, but rich! At least legend says so and we firmly believe it. If we are wrong, we will be black fossils by this time tomorrow.

Mountain spewing rubies is, where board game FeuerDrachen (Fire Dragon) from HABA takes place. Its author is Carlo Emanuele Lanzavecchia. Franz Vohwinkel is signed beneath all the pictures on the box and inside. Game is available on shelves of shops from 2013.

This new box belongs among largest, when it comes to dimensions. It is a square shape, with one side measuring over thirty centimeters. And through this yellow area on the cover, tehre are dragons rushing. In the back, we see a mountain spewing real rubies. A green dragon is holding one of them in his claws and we also see joy of his rider. We will be able to experience similar luck, once we open the box and start to discover its secrets. 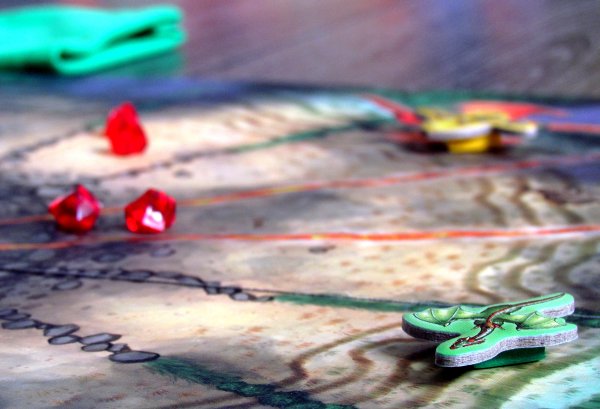 In the first place, big game board is hidden inside. Thanks to it, we can look into the heart of a volcano. There are lines, that lead from the spouting volcano in all directions, creating sixteen slices. On the edges circle four dragons, yet every one at a respectful distance. They need someone, who is able to lead them in the midst of that fiery hell.

Lower in the box are colored canvas bags in four colors, a pair of red dice (both are equipped with numbers from one to five and volcano on sixth side) and figurines of dragons. They are indeed made of cardboard, but they have tummies glued to foam cubes. Their height also differs in pair of one color (total of eight pieces means truly two from each of four colors). Other two bags contain stones – eighty rubies and dozen coal. The most interesting thing is volcano itself – made of two metal pieces, that are placed on each other and thus create a volcano in the middle.

At the beginning of the game, players put volcano in the middle of the board. Each participant chooses  color and receives bag and a pair of dragons. One dragons from each pair will begin movement on one side of the mountain, while second starts directly on the opposite. Gamers receive also three rubies and same amount of coal. All six stones are thrown into bag, while rest of red stones creates supply next to the board. 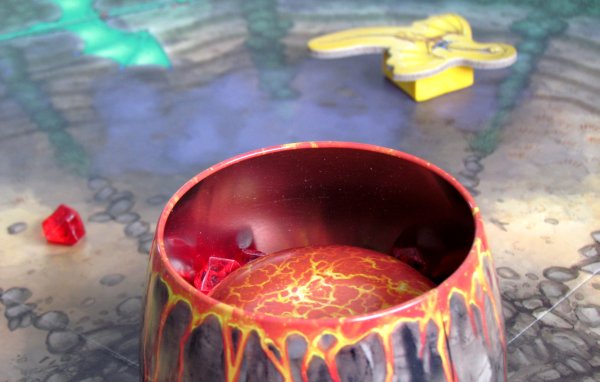 Player in his turn always simply rolls two dice and abide by their result. Success is based in dragon movement, which follows the roll of both dice. At that moment, a player can choose, which of the dice will he use. Dragon moves accordingly, flying over as many fields forward (in clockwise direction). But value of second dice will not be forgotten. It specifies number of rubies, ​​that has accumulated inside a volcano. Player has to pick up that many and throw them into the volcano, where they will wait for the next explosion.

This happens, whenever volcano appears on any dice. Active player slightly lifts upper part of the volcano for a moment and watch, as valuable rubies slip out of its throat and land on the slices around. If a player was luck and has a number on his second dice, he may now move one of its two pieces forward.

Just at that moment, he will also start collecting rubies. That is possible in case he manages to stop on a sector, where any of ejected rocks fell. Player immediately takes them and places stones into his bag. Duel continues in this way, players move and volcano erupts. In addition, whenever two dragons meet on one spot, newcomer tries to steal one stone from inattentive opponents (randomly drawn from his bag). But he has to be careful as he can also pull up worthless carbon. 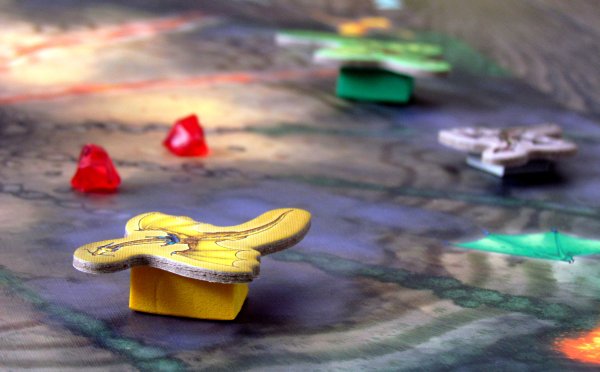 Duel continues while there are stones in reserve. Players gradually add them into the volcano and once the pile is empty, game ends. All dragon riders summ up hoarded rubies in their bags and whoever they gathered the most, is the winner.

Fire Dragon is a beautiful children game, whose success begins with theme and its processing. Volcano really explodes and every eruption spews around it new and new rubies on the ground. Players must collect them and be faster than others at it.

In addition to luck, which is represented by dice, players have a certain level of control. It is most pronounced, when somebody rolls two numbers, which is not unusual. At that moment, two decisions are waiting for him – usage of dice (one for movement, one for volcano), but also selection, which dragon will move. This makes it possible to influence players chances in the game. Place, where dragon stops might bring some rubies to his owner purse. 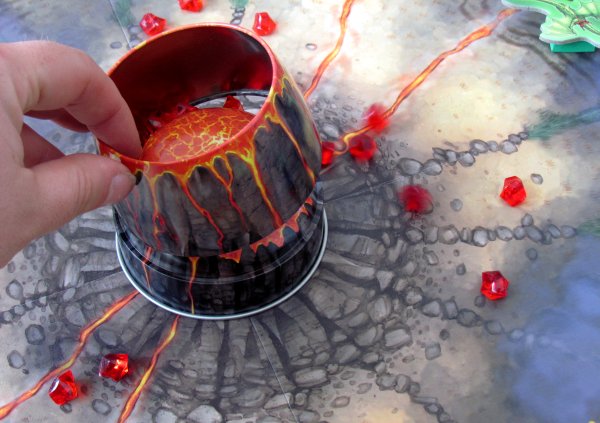 Game remains simple enough, so it can be played already by five year old children. Fun of flying awaits them, while biggest pitfall may be ability to divide movement among two dragons. Little players must be able to count and to decide tactically, which one needs to be moved for better profit. FeuerDrachen also subtly teaches this thinking.

Rivalry is gaining momentum as dragons scatter and begin to collect new stones. Rules allow stealing stones from rival bags, but they also contain coal. But such decision does not make any risk for players,  because even when they pull out some coal, they will not be punished for that. And when they stop on site, which contains both stones and opponents, they can perform both actions in one turn!

Match does not last long and collecting rubies seamlessly ends after fifteen minutes. In multiplayer, stones disappear more quickly, so total playing time gets paradoxically shorter. Additionally, game with more opponents is full of aggression and therefore also more dynamic. But even four dragons (two players) are enough for players to chase around the volcano and enjoy themselves. 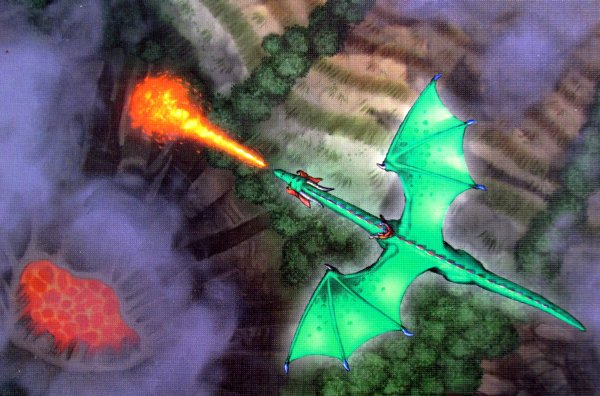 Fire Dragon is great game, which seamlessly captures small players attention. Mechanic of spewing rubies is devised cleverly, so stones do not fly around, but mostly remain at the center of the board. Fire Dragon is one of those children games, which deserves attention of all playful parents.