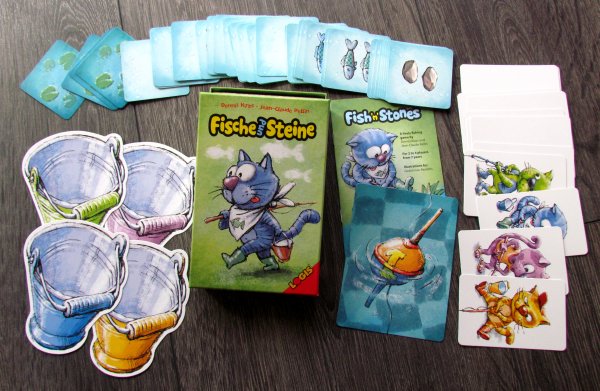 I have always had fish only served on a plate. I liked them from first mouthful, but it was no challenge. They simply lay there and waited for me to eat them. It was only as an adult male, when I realized, that fish are not found that way, but you need to catch them first. And since then, my only dream is to catch a real fish. Yesterday, I got fishing rod for my birthday and now came the right time. But I am not alone on the shore of a pond with limited number of fish. I have to be the best!

We are brought at the start of the fishing race between cats by card game Fish n Stones (Fisher und Steine). Its authors are Kirps Dennis and Jean-Claude Pellin. A small box was published under company logo of Logis, which is not yet well-known. It comes from Lithuania and illustrations were prepared by Gediminas Akelaitis. Whole thing was combined into a whole in 2014.

That said smaller box has green color as its cover and lid contains picture of sweet tooth cat with a fishing pole and bucket. An empty one. In order to make it full, we must first open the box, where is just enough space for several cards. Above it all sits rulebook and cards showing four buckets and a float marking first player. 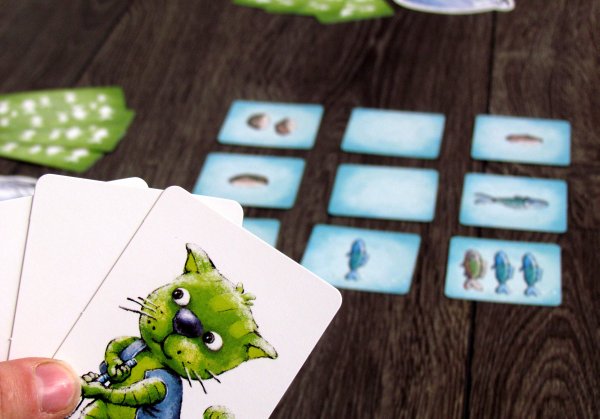 Rest of components consists of two card sizes. Bigger ones are a little more special. Altogether, there is dozen of those, but only four are wearing image. Remaining eight are painted on their front side purely in white. It is not a mistake as their back side is the same as the rest. More importantly for cats, however, there are also square cards. Thirtysix of them and with stones, different numbers of fish or emptiness drawn on blue water background.

Players will need it all together at the beginning of the game. Larger cards are divided among all rivals. Everyone choose one color, gets his cat card and also other two, white, bluffing cards. According to color of cat´s skin, players are also dealt bucket card, placing it in front of them. In the middle of the table is created a pond from nine cards forming a square, face up. All other square cards are shuffled and create drawing pile.

Each round, players try to catch fish and avoid stones. They first have to schedule, where they will pitch their rod. Secretly, rivals spread trio of cards to three rows seen from their perspective. This marks row, they are interested in with cat card, while other two are just bluff. But before all can reveal their choice and really fish, one after other, players may affect distribution of fish in the pool. 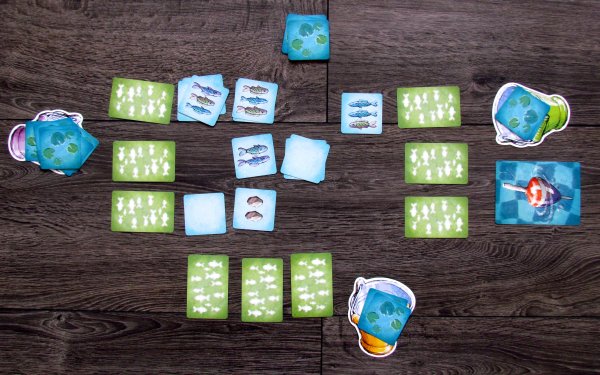 Each player can move one card over one of adjacent cards. This will create a blank space in the pond, but also group of two cards on one space. Each player may do this in playing order from starting player (selected at the beginning of the game, marked with float card) clockwise.

Other players can move any cards, even larger stacks, or paww. It depends only on their decision. After everyone had a chance to chase the fish on the lake, it is time to really reveal selected rows. Now players can get one of card piles (again in clockwise order), which are placed in their selected row marked with a cat.

It may happen, that if someone chose really badly, he comes out completely dry. But even this could be better, than to catch a stone, as we shall soon know. All their catches (regardless of what they have pictured) are put into his bucket. Then starting player chances and game continues for four rounds in total. All participants count number of fish caught, deduct stones from this sum and player with the biggest catch is the winner. 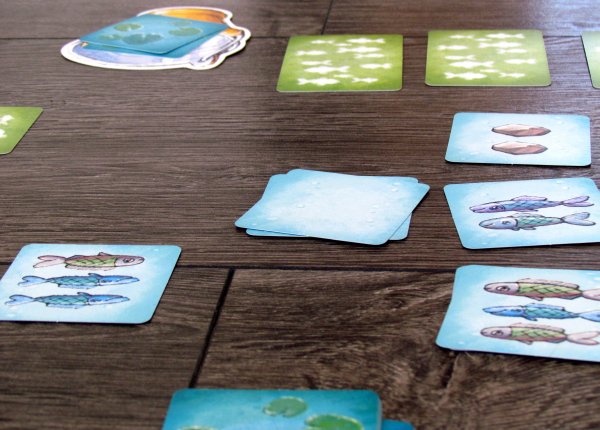 Fish n Stones is a very subtle game and you would not have some exaggerated expectations judging from its cover. It looks like some children game. The more likely can it surprise you, because inside hides a really clever and handy little card game, in which you have to apply not only tactics, but also memory and correct estimation of others.

Deployment of the fish, rocks and water each round is different. Because of this players, must react to new situations and never can be sure, which rows their opponents choose. From this secret planning arise lots of fun and surprises, but also inconvenience for players, who want to have more control over the game.

However, everything is different, because each participant has opportunity to influence state on the table by himself. And shifting is a fundamental part of success. But neither of these interventions significantly prolongs game time, which is about fifteen minutes in total. Gamer can be mastered even by children, who will like its memory element and great illustrations. 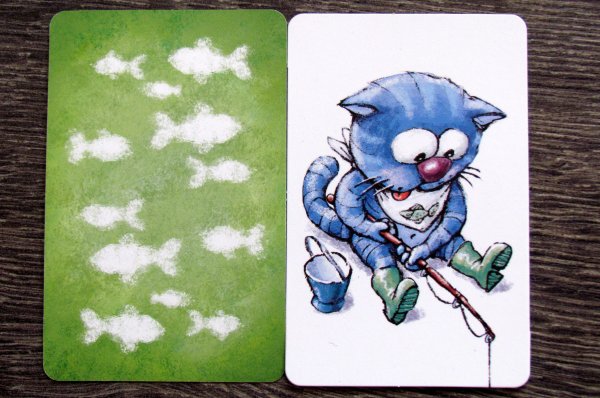 Just be careful, if you play Fish n Stones in three! If you stay on standard four round game, players will not have equal chances. One of the participants will be starting player twice and will have a distinct advantage over others. Therefore, you should only play for three rounds, so everyone has same chance, being starting player only once.

Mentioned advantage of starting player is important even in classical even numbers games. Possibility of first choice is crucial during final activity – fishing. Starting player has option to choose first and therefore has more cards to select from in his chosen line, having a great chance, that there is something interesting in his row. On the other hand, someone who plays last, must often settle for stones or walks away empty handed. But there is also one advantage going in other direction of playing order, and that is distribution of pond cards, where being last is better.

Game contains enough tactical options. At the same time, you do not feel, that you are playing tenth iteration of some other game as it is usually with card games. This box carries along with it his own charm and gameplay. And that is great news. 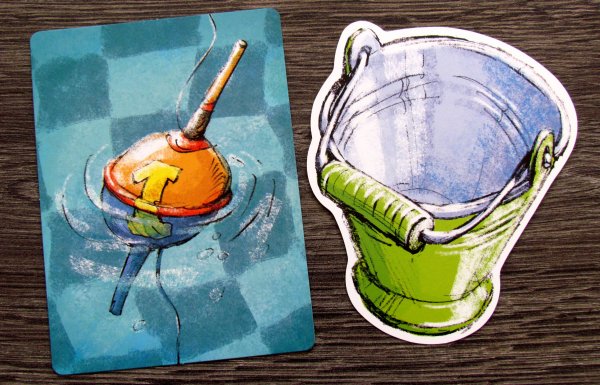 Before reaching the conclusion, we return once again to beautiful processing. Illustrations were successful. Cats look cute and everything is playful enough to make children interested in the game, but at the same time, adults can like it too.

Fish n Stones is a card game, in which is hidden a very good potential to entertain families, children and players. It is cleverly simple, fast and surprisingly new. Catching fish is not just about luck, but players have opportunity to influence their chances. Fish n Stones can rank very well among games, that we most likely grab with us, when going to some visit.