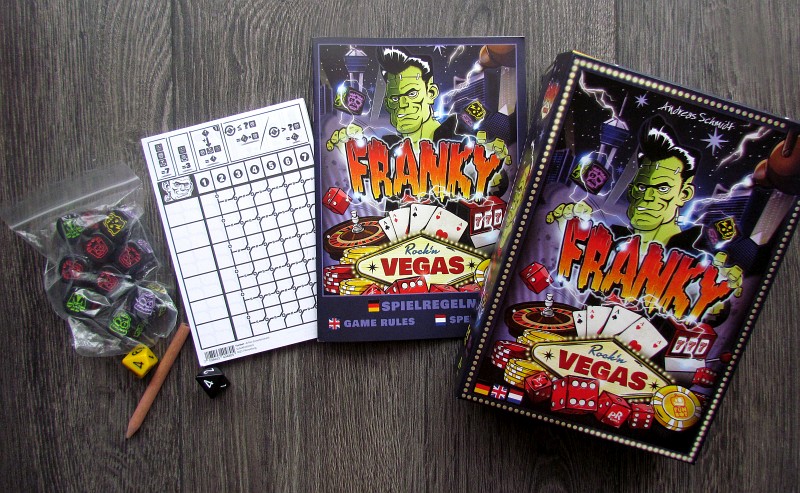 Everyone was afraid of him. They even marched on his castle with lighted torches and tried to drive him out of their region. They did it. When he could not understand the inhabitants, he went to distant lands and slipped into the city of Las Vegas in a country called Emerika. Places where everyone has only as much value as the weight of his chips.

The mysterious character is, of course, Frankenstein, who changed his name to Franky in a city full of casinos. He is the main character of the game Franky Rockin ‘Vegas, created by Andreas Schmidt and entrusted the release of his game to Funbot with illustrations by Ronny Libor.

On the lid of a smaller elongated box, we see the main stitched figure, surrounded by a view of all the casino attractions. Small box still has an exaggerated dimensions, because in addition to the rules, players will only find a block of leaves inside and then a set of dice. Each participant will receive one recording paper (full of squares to record the values obtained). All eleven dice (nine regular six-sided, one black octagonal and one white ten-sided) remain within reach in the middle of the table. 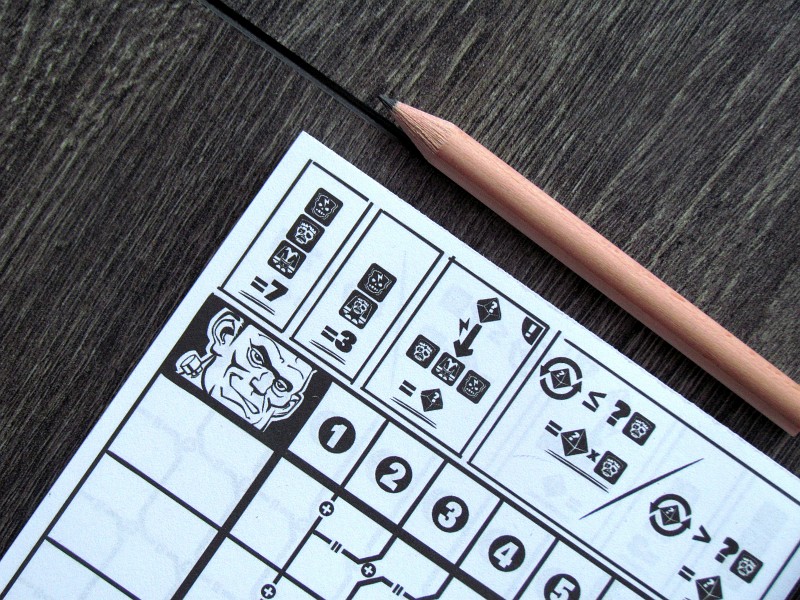 One roll of the dice decides the starting player who launches the first of a series of rounds. Each move starts the same, with a roll of a complete set of eleven dice. The result can be flipped arbitrarily, but after each attempt, the player must lock at least one new dice to add it to his result. Once a player has worked his way to the complete eleven locked dice, it’s time to score his efforts.

There are sets of multicolored icons on the cubes, that can be combined and grouped into points. In order to receive a reward, a player needs to get a set of heads and bodies of the same color and add one lightning bolt icon to revive the creature. Everything can be done differently using the red body icon, which also replaces the head. However, such a set has a lower point value, namely three compared to a full seven points. If the player manages to use all nine dice with icons and put them into a combination, then he gets a bonus of ten points.

Multi-walled dice with numbers serve as another variant to gain points and also to use rolled dice, that do not wear useful symbol. So players have a chance to escape the bad luck. They need to connect a number dice to as many Franky heads as the cube shows. But the reward is not exactly set by the rules and the luck of the next roll of black dice will decide it instead. It can even be a multiple of the number of heads and the number on the cube. 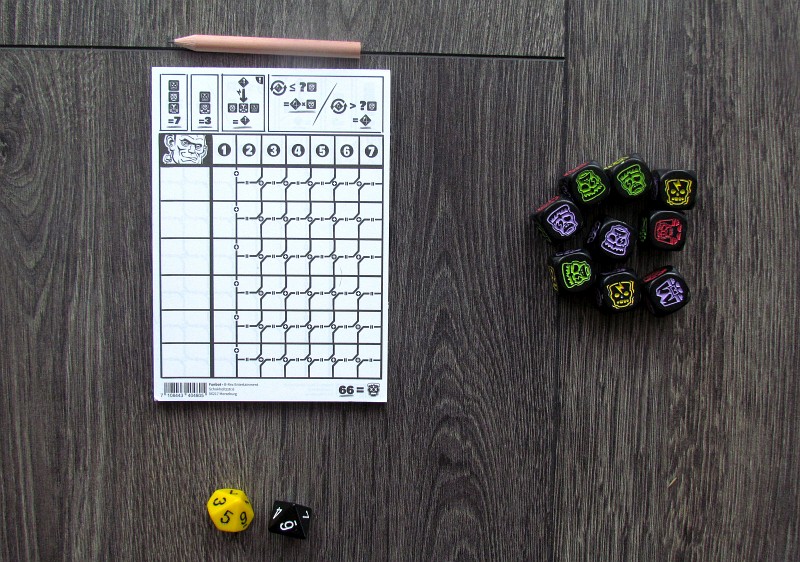 The last way to get some increase is a yellow ten-walled die, which at the moment of its setting aside requires the same number of dice as its thrown value. It will no longer be possible to use these dice in a turn, but unlike black dice, it does not matter, what the result on used dice is. These dice are then rolled at the end of the turn again, and each complete Franky figure built from them has a value corresponding to the number on the yellow dice.

The game ends after seven rounds. Players add up all the accumulated scores from each move and the one with the highest total can celebrate the victory. However, the fight may end even earlier if one of the participants gets a result of 66 points. At that moment, he immediately becomes the winner.

Franky Rockin ‘Vegas is a dice game about creating sets and trying to take risks. If the contents of the box were not multi-walled dice, it would be just throwing and hoping for the best. Fortunately, the other two dice open up a number of other possibilities and solutions from the otherwise relatively uncertain struggle with happiness and chance. 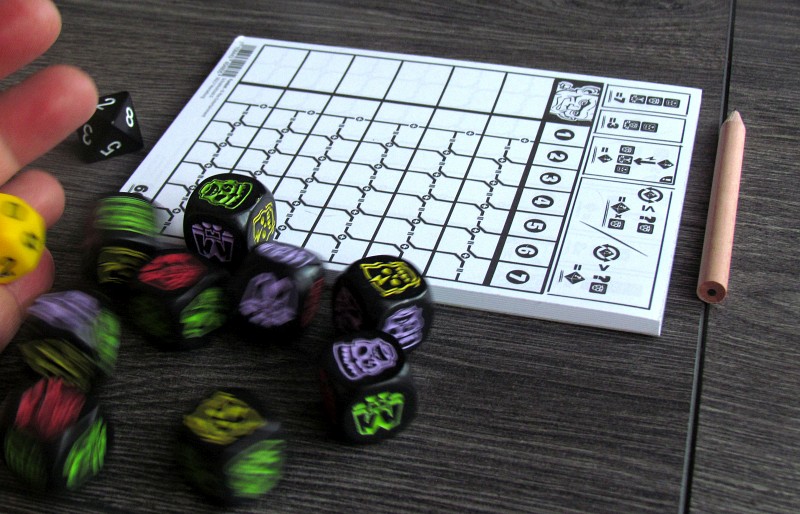 The player has a complete set of eleven dice under his command. He can shuffle them in an effort to get restless tools to show the right values. In the extreme case, up to eleven times, which unfortunately leads to relatively long turns. The player discards one dice in each round and the other participants have no chance to entertain themselves. Everything becomes significant especially if there are more than two opponents in the game. Waiting two or even three moves at a time is not pleasant and it goes for everyone who participates in the game.

In general, the game only acts as another variation on Yahtzee, ie a clean roll of the dice in an effort to get the right combinations. You can already see that the description on the novelty really fits. Unfortunately, we expected something more, some interesting decision-making that would fill the game more. This is really just a matter of symbols and their correct postponement. At the beginning of the round, the player must make the right decision and discard the correct set of dice, as it will usually not be just one, but more dice that you will lock in each roll. 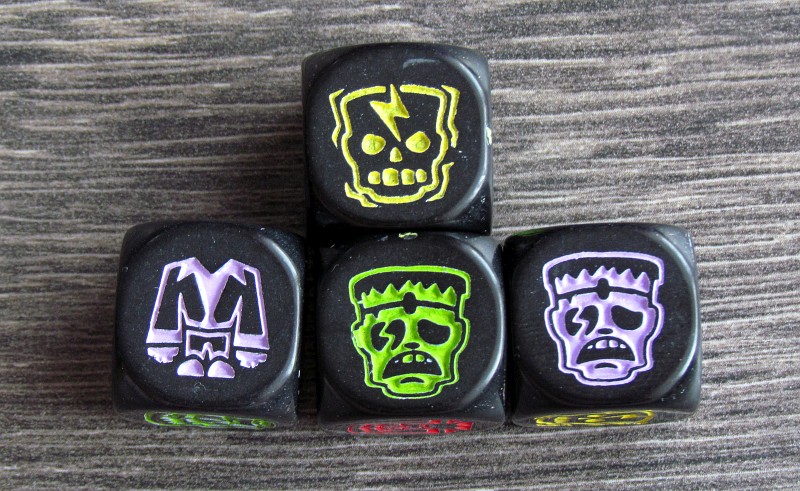 Unfortunately, the rules for scoring both numbered cubes are quite complicated and confusing. For a dice game, all scoring conditions should be clearly intuitive, but this is not the case here. For example, in the case of a black dice, a repeated roll does not yet mean points, but a comparison of the result with the previous one. There is an obvious effort to add something interesting, but it’s all overcombined.

Franky Rockin ‘Vegas is a game with crafted dice, that are nicely colored. But that can’t save the overall frustration. Basically, the main thing is that the game still revolves around creating sets. This outdated mechanics has a new brother, but he is overcombined and the overall impression does not move anywhere. Franky Rockin ‘Vegas is not a successful design and will probably disappoint you as well as it has disappointed us.

Franky Rockin ‘Vegas is a dice game, where you will constantly switch in search of better icons from which you will be able to assemble the head and body of Frankenstein and give him life with the help of lightning. But not only is this part of the round random, but you are also accompanied by another pair of dice, the use of which is not exactly intuitive. If you are not on the move, you will get bored. And Franky Rockin ‘Vegas won't be much better fun, even if its your turn.