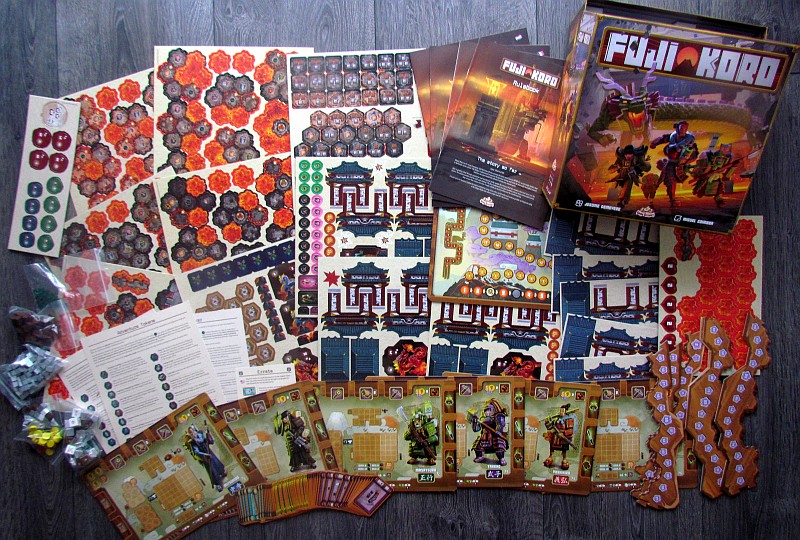 I try not to look too much, but even when I am not looking, it is impossible to ignore. Hot Lava all around me. I step very carefully, but the surface seems to be higher every moment and it becomes wilder to move around. Soon it would be true, what they warned us all, before we set out to the heart of the volcano. It all explodes here and there is already not much left of the temples. Everything burns. It’s time to pick up everything we managed to collect and escape.

The fiery maw of the volcano and, above all, the brave figures who plunge into it to save valuable objects. All this is theme of the board game Fuji Koro, under which designer Jerome Demeyere is signed and the illustration was prepared by the unforgettable Miguel Coimbra. The game was released by the Belgian company Game Brewer and tested the interest of players on the server Kickstarter.

A huge box arrived in our editorial office and immediately we had to flee from the dragon, which on the lid stirs the already hot surroundings. But once the situation calms down, you can finally peek inside the box and start studying a lot of sheets. From these, the players free a set of frames that, when connected, form the perimeter of the entire playing area and place the crater plate itself in its center. In the prescribed places, they will attach a sacred temple and bridges. Players puts a board with a map of the road to the palace next to this huge frame lined with numbers.

Each participant gets their own album in the chosen color. At the same time, he also determines a samurai figure, that he places on the center box. Players will also receive action tokens, sacred scrolls, stones of raw materials, and will also place a point marker at the zero starting position. In addition to this, everyone must also have several monks.

Then all there remains is to prepare all the other components, that have their pile. An exception is the starting menu of equipment cards (helmet, gun and sandals), which are laid out according to the number of players. But then there are other magical items distributed according to the key in the rules into individual cardboard temples. In the case of scrolls, there is also an offer of the top three of the shuffled deck.

The difficult preparation is finally over and we can start playing. Players then take turns, in which they always have two actions available and indicate their efforts by moving their action disc. In doing so, they can choose from four options, starting with the movement. The run must always end outside the hot lava and the movement has usually a maximum of two fields in any direction. It can be interrupted by a fight, either with another samurai or with a lava dragon. 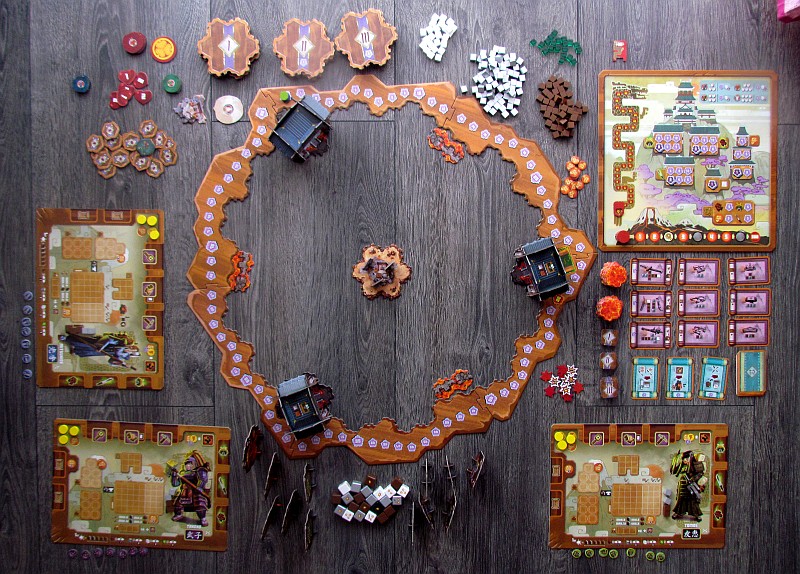 The second possibility is also related to movement inside the volcano. When the samurai arrives at the edge of the currently discovered area, it can explore what lies next. He simply takes the top plate from the stack and puts it in the position they want to discover. For this heroic endeavor, they receive victory points and then fill the prescribed positions (according to icons) with raw cubes, dragon figures, scroll pieces and monks.

When these new cubes appear, it is a new motivation. Heroes have something to collect. Just stand in the right place and by using the collection action, the samurai can pick up items that are in his position. Players can instantly move these into their characters’ backpacks, but they can only do so with scrolls of their color. In addition, they also receive one of the available cards. Monks are a way for players to improve, for example to carry more things.

The last action becomes important, when players run out of their action discs. At that point, they need to rest, allowing all discs to return to where they were, getting available. But then, above all, using the raw materials can make some equipment for his hero. 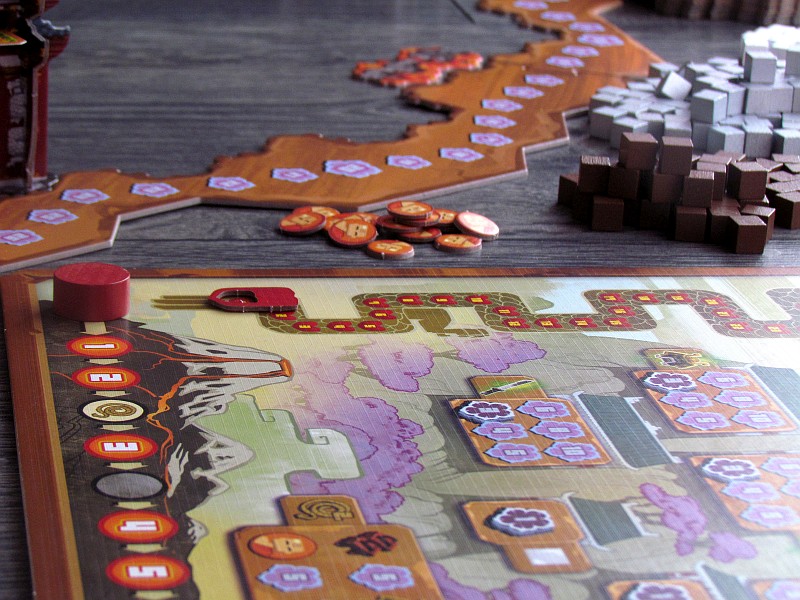 Each item has a differently sized table of squares, but players do not have to fill all of them during crafting. The more material and the better the material the player uses, the more durable the outcome is. This is of course the case with a helmet and sandals. The last type is a weapon, where in the area eight by five squares, different patterns are created according to the allowed rules. With a monk can be produced even two one-handed or one two-handed weapon and different designs. Players can unleash their imagination, but they can also follow some of the blueprint card designs in the menu, get the card and unlock the bonus for one of the basic actions.

The weapon and its material will decide not only how many attack die the player will use for the attack, but above all the length of the entire weapon will also decide about the initiative. The resulting length number is compared to the specified dragon speed. With the help of the dice, the player can deal damage (where the magic weapon is the strongest), but at the same time must also receive them. 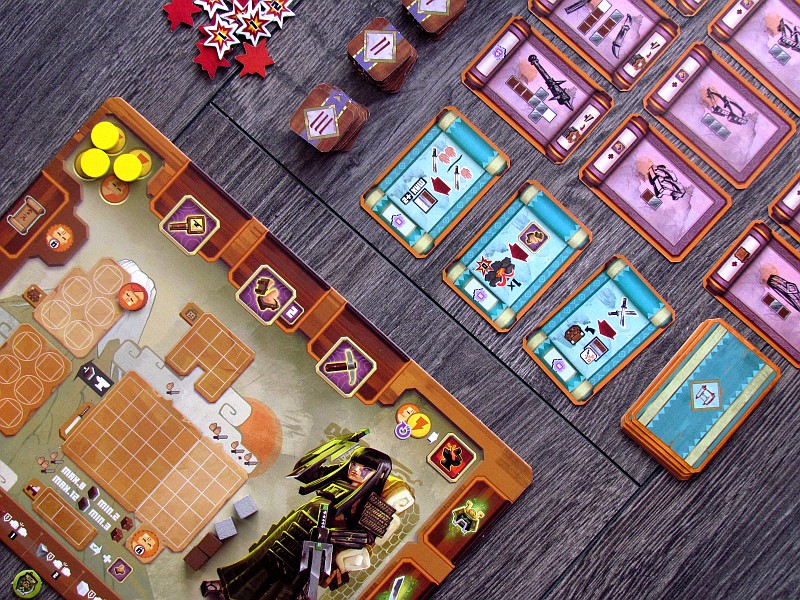 And why would anyone want to fight a dragon? When a player (or group) defeats him, everyone gets a reward in the form of victory points. In addition, they receive a valuable dragon tooth, which can be used as a raw material for the manufacture of weapons. However, samurai may lose consciousness, if their helmet’s defenses are no longer sufficient. They fall out of combat and even damage the weapon during battle as a result of a bad rolled icon.

Players accumulate not quite obvious victory points, discover the crater and try to accumulate the largest set of scrolls. As soon as one of them reaches thirty points, the end of the game is triggered. It stretches for another eight moves, in which the samurai try to escape from the volcano. Some areas of the volcano begin to explode and spew out the lava, which can cause injury. Outside there are rewards, as well as points for bonus tasks. The player with the most points is the winner. 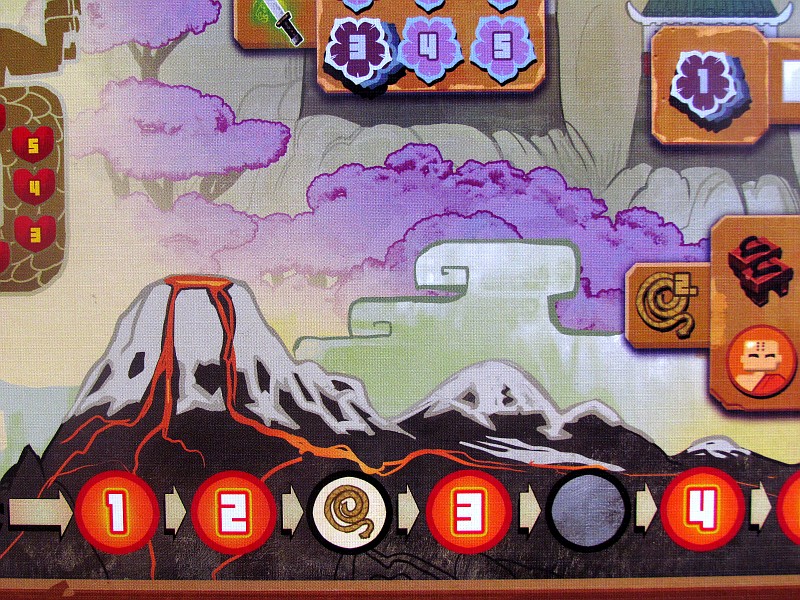 Fuji Koro is a game full of fire, lava and tension. It is bubbling everywhere, and samurai are running around as if nothing was happening. At the beginning they came to the crater and they do not know their surroundings. They are looking for scrolls, that would otherwise burn. Only heroic deeds can save them. And that’s exactly, why players are putting their lives on.

The first big attraction is the theme and the constantly emerging dragons. It is not often when a volcano is bubbling in the lead role. And who would expect you to have a chance to look inside. Running around must be the most important thing players can do. They need their partially fireproof sandals, which allow them to jump over hot lakes and flowing rivers.

What is unique, however, is the chances of players to make combat equipment themselves, according to their wishes. Let us say, that something like this has not been here yet. The dice structure offers a lot of possibilities and it can always have different impacts on the overall capabilities of the weapon itself or armor. It is a pity, that the shape of the weapon itself has no meaning. It’s just a dice composition. Yet this part represents the greatest attraction the game can offer. 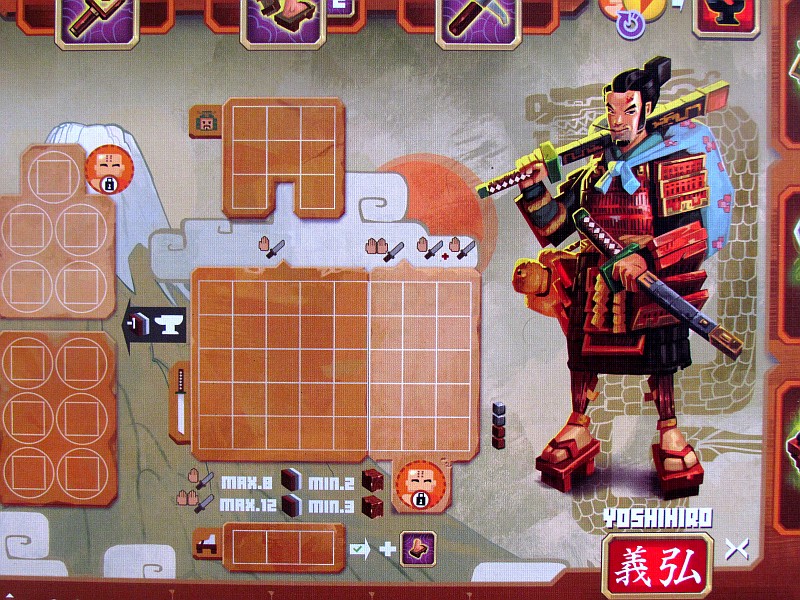 Gameplay is a lot about the constant handling of tokens and equipment, that players put on the board first, then back to their inventory. There is always a need to move something. And this is definitely not good news, because it keeps you from really enjoying the zigzag and collection that it should be about first of all. There is quite a lot of rules here for the simplicity of the game to master and remember.

And most of all, the game is surprisingly random. Just turning the new crater piece will usually decide what players will be able to collect. But above all, dice affects dragon fights, which can have far-reaching consequences. 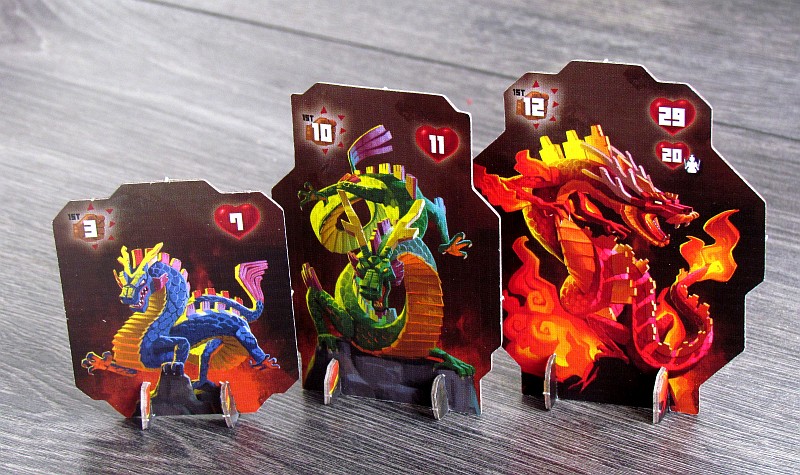 In addition to the basic rival variants, we describe, the rules also include a chance to cooperate. A separate version of the rules means that players will struggle with time in order to collect enough scrolls and escape. But as the content of the two-hour game and this seems just too little.

Game up to thirty points is quite long. And although the game looks like something more, in fact, it’s just about collecting stuff. It is clear that the environment is the distinguishing element. Theme and atmosphere remain the main weapon that will attract you to the game. But the more participants there are, the more it stretches to unbearable. So if there are four opponents in the game, then the game is much more dynamic. But still, count that two hours will not be enough. 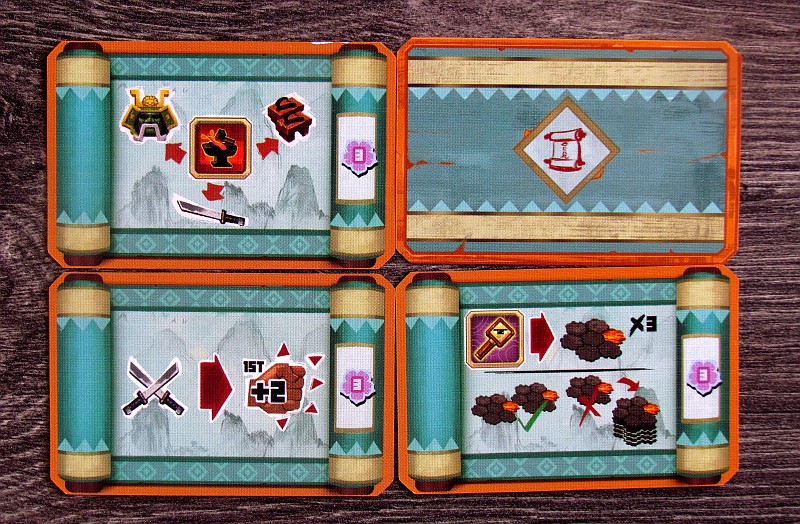 A lot of cardboard components means, that players get a beautiful spatial feeling from the whole fight inside the volcano. The presentation is really luxurious and you can see that it was given really detailed care. There are not too many players, who would not be tempted by her appearance to try.

Fuji Koro is a game, that in our presentation and idea raised great expectations. And maybe that is the problem, because big goals can also be equally disappointing. And this is exactly the case with this game. Fuji Koro is still not bad entertainment, only in the space of its overall playing time does not use the potential to the maximum.

Fuji Koro is a thrilling adventure inside a volcano, in which players will be afraid of lava, but especially dangerous dragons. The experience is interesting and exciting. In addition, players have the chance to create their own weapons and armor from the dice. But then everything comes down to chance and above all a long game time and most of the atmosphere gradually fades away. In addition, you will find, that assembled weapons are actually meaningful only in terms of the cubes, from which they consist and shape no longer plays any role. Fuji Koro is a game that raises more hope than it can fill.