Review: Fuse – thin line between a match and explosion 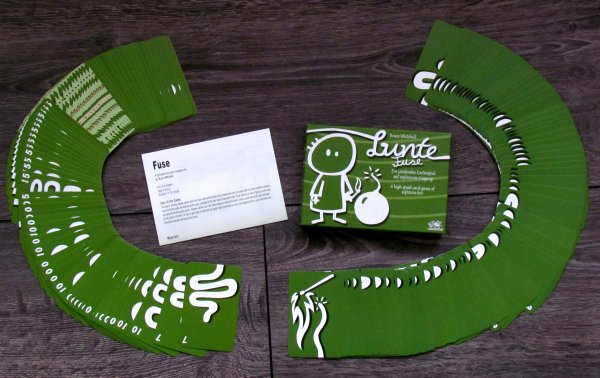 Just one strike of a match. In the wrong place at the wrong time. Creeping flame on the ground is not easy to stop. His path meanders everywhere and wire incendiary leads it to its goal: bomb, that goes bang. We want it to explode at some point. But we want to avoid the resulting explosion and point it towards others. And we need longer and longer cord.

Bombs, explosions and detonators are theme of card game Lunte (Fuse in english), created by Bruce Whitehill. Its simple creation found goal of its journey under roof of publishing house Mücke Spiele and a moment later with us in newsroom. All this in 2014 with illustrations by Rautie.
Entire game is dressed in green. Dark teal reigns supreme in the box cover, which is painted with white lines, creating a figure holding a match, a bomb and a cord, that leads to it. Before he manages to really flare it up, you will interrupt the path and open the box. We find a respectable 144 cards inside. Such content is surely quite surprising for such a small box.

Most cards (112) are formed by flammable lines. They have different values (3, 7, 10 and 15 points) and lengths. They also include one match card, a dozen bombs and eighteen early extinguishment chances. And that´s all we are left with. Only rulebook should be noticed, because it is short and simple, as you will see for yourself in our article. 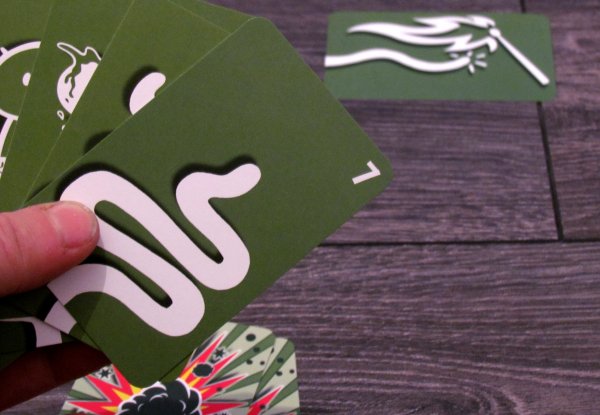 It all starts with a match. Players put it in the middle of the table. From there, fuse grow sideways, as players extend it. Each participant receives two bomb cards and put them on the table in front of him. He then gets five cards of random wires and two separate extinguish actions from shuffled deck. Some other bomb disposals (depending on the number of players) are added to drawing package. Into last thirty cards, a special bomb is shuffled and placed underneath the regular cards.

Since then, everything will be running very fast, because time is very important, when working with bombs. Players take turns to play one by one card and attach them to prolongate detonating cord. Connecting them creates a snake, which leads from starting match ahead. After playing, everyone just draws a card from the pile, so everybody still has seven cards in hand. Whenever is his turn, a player can decide and let the bomb explode. But he must pay for it from his reserve – he has only two explosions for the whole game.

At this moment the game is immediately interrupted and scoring occurs. Cards, that formed the detonation cord are taken by player responsible for the blast. These are points, that will be counted at the end of the game. Then new fire burns and game continues with subsequent rounds until red bomb is discovered in a deck (or until players use all their bombs). Each participant will now adds points for his accrued cards. At the same time, he must deduct values of cards, he had left in his hand. Pyromaniac with highest total is the winner. 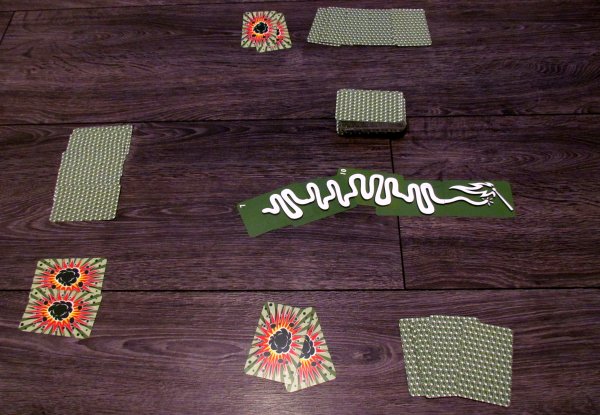 Fuse is a simple and very fast card game, that keeps players at their heels. Much of it is about the approach and how strict players are on time for playing cards. Rules recommend, that new cards should be connected whenever possible and without delay. If you follow these instructions, each round is very fast.

The game has discreetly hidden deciding, which players must always carry out. Do you play another card and risk to lose the whole range of points to some other player or do you rather grab points now? Timing is important. Game contains a fuse for the event, that any of the players tried to simply terminate wheels. Each participant has only two his own attempts to collect points. In addition, he wants to have the most valuable cards in these tricks and does not want to keep them until the end. At that moment, they bring negative values.

Another way to get rid of valuable series, that you can not get are rogue cards. Such extinguish prevents bomb from detonating and cards creating it are discarded. Only card used to put down the fire is left there, awarding points to player, who wins next round. 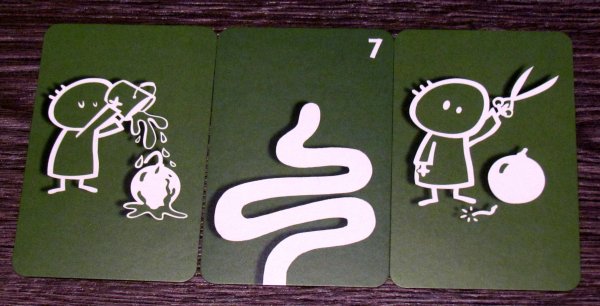 Of course, there are plenty of players, that do not like this type of games. And Fuse offers no surprise for them in this respect. So if you do not like games, where you have no time to think, and it is necessary to anticipate the moves of others, then this is not for you.

Player will find a truly unique graphic concept. Simple draft surprisingly fit the game´s them and does not look bad at all. Although there are no detailed images, which now mostly attracts players to purchase the game in the first place.

Fast rounds mean of course a shorter total time, which stays on very pleasant numbers around ten minutes. This makes the game truly leisure fun. And it does not matter, if you play with two or six players. Only those decisions are a little heavier, when it comes to two.

Lunte is a game, that is not for everyone. It is a lightweight, fast-paced action card game, in which players must make the right decisions and grab points in the perfect moment. Cards offer a chance to spoil everything, and everything is very fast completed. This would be reason, why Lunte could often appear on the tables of board-quickie-lovers.

- not for everyone
- basically game, in which you try to outwit luck

Lunte is such a well hidden game of luck tempter. You are trying to stick with nerves better, than your rivals and grab largest reward in the right moment. That ´s not anything unique, but the gameplay is very fast and with dense atmosphere. It offers an interesting opportunity to enjoy a bit of tension and bluffing with all the numbers and all that during ten minutes of game time. Lunte certainly is not for everyone and will not have much fans, but it will surely find its players.