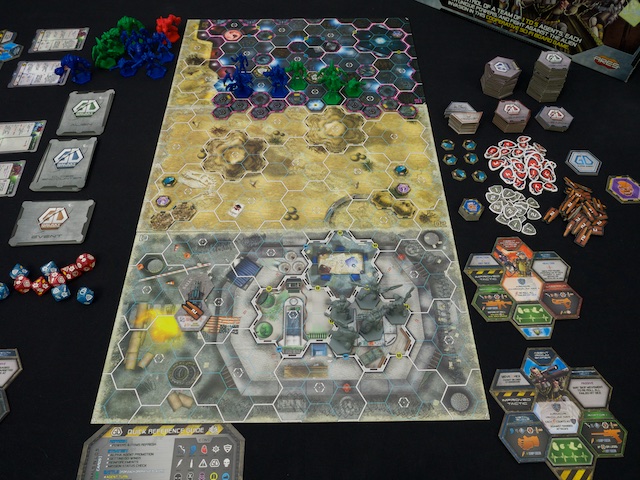 Kicking aliens in their space butt is one of our favorite pastimes since the days of PC game UFO: Enemy Unknown. Developers from Gremlin Project have prepared for us another opportunity in the form of highly successful Galaxy Defenders board game, that gathered nearly half a million dollars through Kickstarter and became one of the most successful and at the same time controversial games in recent times. And yet the recipe for success is not nearly as complicated as it might seem.

Vania, Vania, wait a bit, where have you been to? Don´t pass by, we must meet.
– Girl

First of all, there is good visual perception. Galaxy Defenders are a risky game – literally. Boxes belongs to the heavier ones and amount of material inside can be blamed easily. In particular, 6 double-sided map tiles and amount of tokesn, all made from thick carton – this stuff weighs something, when you add to it almost thirty pieces of extraterrestrials and government agents, you have reason for stretching your back while lifting.

All components are extremely well made, especially miniatures are interesting, made from unusually hard plastic. The level of detail is not such great, poses look a bit stiff, but generally quality is definitely above average miniatures.
Whole game design is reigned by hexes, almost everything is made from them. Hex are profile boards of agents, weapons and various improvements, extraterrestrial signals .You get the picture. It reminds us a little of the legendary Heroscape. It works very well and if you are pop culture enthusiasts, you can find many hidden jokes on terrain. On the other hand, some map range from chaotic to psychedelic and their longer observation generates flashing lights on your retina. 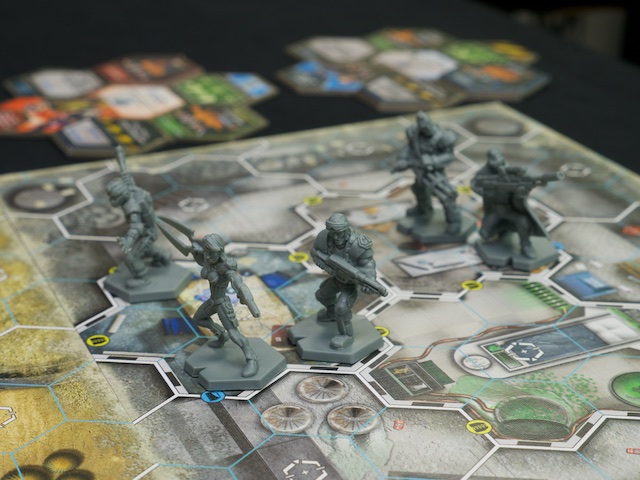 Galaxy Defenders playroom falls into category of fully cooperative tactical games. Players take over role of agents, who are trying to prevent shoddy alien to sprawl over our planet. Each match of the game is controlled by a script, that brings you closer to the background story and determines, what components to use in a particular game. It is also possible to choose optional rules for each game, that affect difficulty of the game.

Rulebook in the box contains a total of twelve missions, that you can undergo, either individually or as a campaign, where outcome of one affects the others. You will investigate alien activity in the desert, rescue known scientist in Area 51, try to take over alien ship, uncover conspiracy and attempt to prevent whole invasion from outer space.

Each player takes a role of one of the agents and can choose from five characters. If you play the campaign, characters are continually improving and gaining more effective (lethal) equipment. Galaxy Defenders is very hard game and that´s good, because going through each mission is a challenge and from time to time, you have to think about what have you done wrong, that you are holding intestines in your hands. 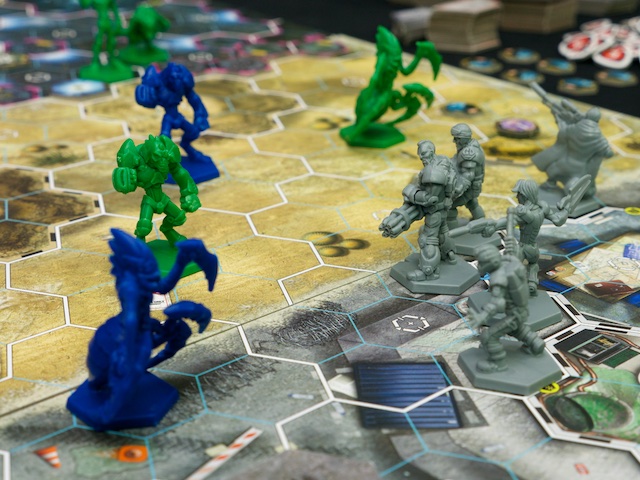 ” Bourbon and beans. An explosive combination. Do you think Spock can handle it?”
– James T. Kirk

Let us talk the actual gameplay mechanisms. Players at the beginning of each round choose commander (Alfa agent) among themselves. He automatically becomes the first player and has the first opportunity to respond to the situation on the board, but he also may be target of some unwanted effects and game events. Before the agent tries to scrunch space insects into a tomato paste, he can apply to headquarters for support (new weapons) and get promoted. To do this, he needs to have some notch on his gun or at least gathered some pieces of alien technology.

Starting with Alfa Agent, players alternate in their turns. By the time they get to action, everyone may perform movement, combat or special action and al this in any order. Each agent has a number of movement points and it is clear, that an armored tin definitely will not scamper across plains as agile girl in leggings. At the same time, firepower will be also different.

Each character has their own style of playing. Where Marine is quite universal agent, biotech is specialized in the healing and controlling combat drones. Infiltrator(ess) is quick and good in close combat, sniper is particularly appreciated for his accurate shooting and hulk is simply a tank alive. The variety of characters is reflected in action stage, when they can use their specific skills and unique amenities. In addition to running around the board and shooting, you will have to compete also in window-dancing, scanning locations, breaking through locked doors, escape from arms of extraterrestrials, tactical crossing across the board and constant repairing of jamming guns. 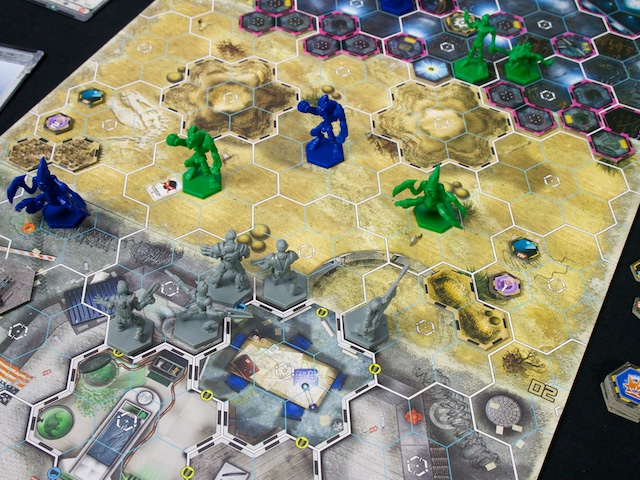 ” There are over 550 million firearms in worldwide circulation. That´s one firearm for every twelve people on the planet. The only question is: How do we arm the other 11?”
– Yuri Orlov

Speaking of weapons in battle: Galaxy Defenders is purely a dice fun in traditions of ameritrash genre. Thus, dice will bring you either pure euphoria or push you into the clutches of deep depression. Each weapon has some powers, expressed in number and type of dice, that you can use for attack roll.

Weapon range also must also be taken into account, together with line of vision or a limited number of shots. Dice are ten-sided and contains symbols for hits, defense, special weapons effect, wasting ammunition, or even weapon jam. Depending on how much hits you ultimately manage to deal, you have to roll as many dice for your target. Each dice brings a chance to roll a “shield” and avoid injury. To hammer average resistant alien from ends of the universe… is not easy.

“The only good bug is a dead bug.”
– Man in recruitment video

At the end of each player´s turn, its time for activation of extraterrestrials. Galaxy Defenders are fully co-operative play, which means that no-one has to become interstellar creatures, but game uses a system of artificial intelligence instead, which is always summarized in the overview card of that type of invader. In the game, it works very simply: player, whose turn is ending, draws a card from enemy deck and learns, which monsters should be activated. Based on the distance between agents and monsters, aliens can attack with melee or ranged weapons, move towards agents and / or use their special abilites. Some types of alien constantly regenerate, while others try to catch you in their clutch and drag you to its nest (probably to eat you there). Extraterrestrials are divided according to their colors to normal (green), stronger (blue) and elite (red).

After all players have played their turns and aliens were activated, its time for events. Each scenario has prepared a deck of cards, which functions as a timer. At the end of the round, card from here is flipped and many situations may occur. They can run an action, change weather and other conditions. But the most common event is, that there appear new signals on game board. 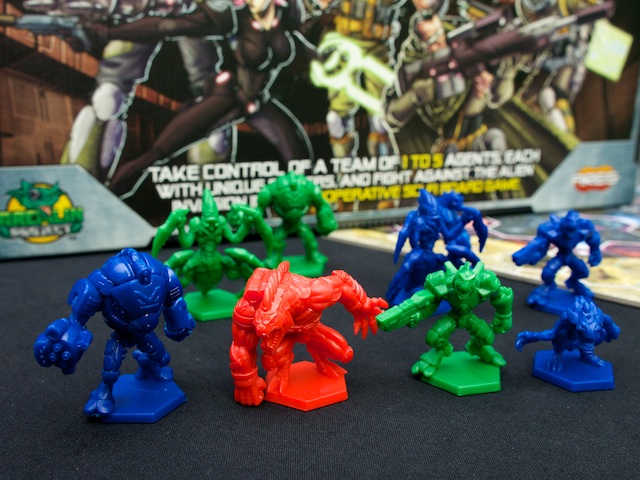 „Ash, that transmission – Mother´s deciphered part of it. It doesn´t look like an S.O.S.”
– Ellen Ripley

Galaxy Defenders use signals, that move across the game map towards agents, but they have no idea, what is hiding behind it. Only when such a signal get into the field of view, they can determine, whether it was a fugitive scientist or the fearsome oversized praying mantis. This creates a substantially constant element of pressure and players can never be sure, what is rushing towards them from teleporters.

” This is not a war any more than there´s a war between “Men and Maggots”… This is an extermination.”
– Harlan Ogilvy

Game time is about 2-5 hours long. Depending on the scenario and experience of the gaming group you are playing with. The entire match also creates a certain rule-based framework, in which it is easy to create more and more stories, scenarios, and even entire campaign. The internet is already crawling with a number of such, some from the developers themselves or purely fan-made, although the quality of the latter often has nothing to be ashamed of. For similar games, experience needs always be supported by a good scenario and Galaxy Defenders in its foundations offer a very dense portion of the adventure. Some scenarios contain interesting plot twists and surprises, in addition to how they affect the following game.

If you like sci-fi movies ... Starship Troopers, Judgment Day, Men in Black, War of the Worlds, and more ... this is the game for you. You will also need a good sense of tactics. The game will not be defeated by greenhorns. Big advantage is the number of players ranging from one to five, with practically any number playable without issues. Gremlin Project is already working on expansion and so we can look forward to the next strike of aliens in the near future. Yes, Galaxy Defenders game is not cheap, but you will be getting really a great value for your money, in many components, that are all interconnected into functioning game mechanics. This is without any questions one of the best games of its genre.