We imagine chaotic shapes under the word art, in which we have yet to look for some true meaning. Or at least you would look for wild and lush colors. But that may not be every meaning of word art, as Pablo Picasso showed to our ancestors. Geometry is beautiful as well.

And perhaps in his footsteps walks board game Geometric Art, created by trio Eros Lin, Hsu Wun Hao and Romain Caterdjian. Ming Wu added atmosphere to the game with illustrations. The game was released in Taiwan by EmperorS4 in 2019 and appeared on Esdevium Games’ European distribution list during the holidays.

Lid of this smaller box offers us a view of the gallery, which players visit in an effort to create their own unique works. Each player receives a canvas board, one skill card and a pointer token. In the middle of the table, they create a common menu of seven dice. They also place a shuffled deck of themes next to it, as well as shuffled number cards on the dice. However, the value of the top card is visible at the beginning. 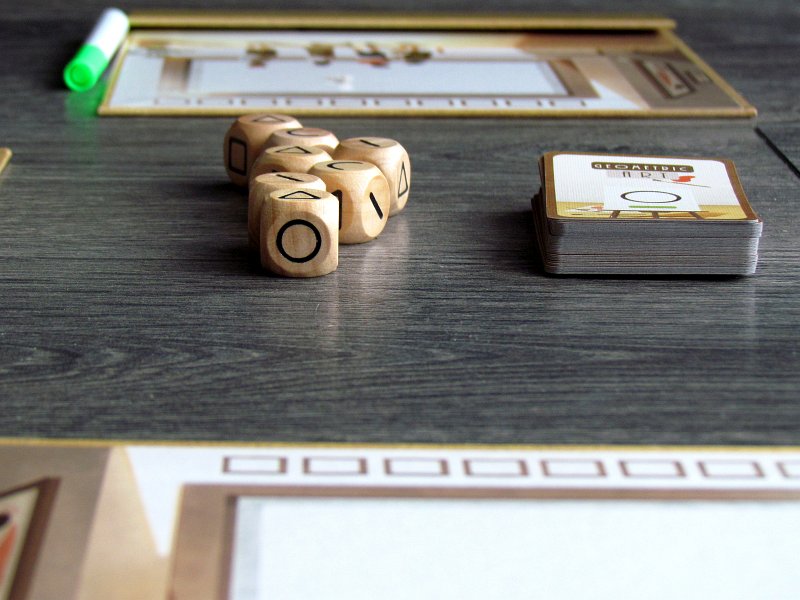 At the start of every round, players roll a set of all available dice and reveal the top card from the theme pack, which determines what the theme of the artwork will be. Players can only use as many dice rolled as is the numbers on the dice card. There is printed a cube lying on a chair. According to the available information, everyone secretly writes down the name of their painting, which is very important, and then players have a chance to draw art with the help of symbols from individual dice. They can use each icon only once.

Then everyone reveals their creations and the game continues with a guessing phase. The names remain hidden, because it is these, that players will guess. One of them becomes a painter and the others can try to call for the attempt as soon as possible. Only the one, who speaks first, can try to guess the name of the painting and if the answer is correct, he will get two points and the painter one. In case of a wrong guess, the player marks a cross and others can try to guess. If no one gets the name right, the painter will also receive a cross mark.

Gradually, everyone takes turns in the role of a painter, and the game can continue for another round, from the initial roll of the dice to the drawing and guessing. Match continues until one of the participants receives the fifth cross. In such a situation, the whole game ends. The winner is the one participant, who has the most points for correctly guessed names. 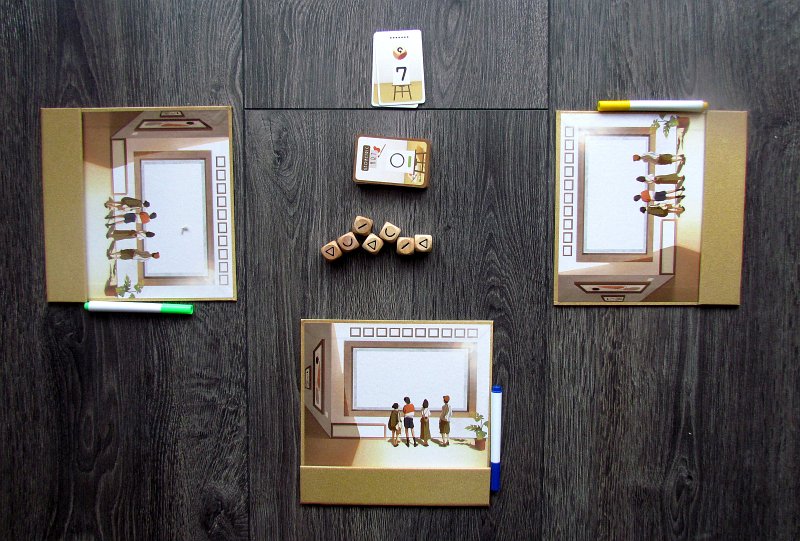 Geometric Art is seemingly a classic drawing game, but it brings one important limitation. Players cannot work with complete freedom, but the dice, by rolling them randomly, determine several shapes that need to be combined.

The theme on the card is known in advance, and even before drawing, everyone can easily come up with what they will want to portray on their board. There are a number of different areas to choose from, such as a calendar month, body parts or a trip to the hospital.

Fortunately, this game is not so much about how well you can draw. All rivals have the same set of shapes that are just needed to be redrawn. So it’s a much more duel of imagination, because putting a few lines into a shape, that makes sense and goes with the theme, is not easy. Players don’t have any time limit for drawing, which can be a bit of a hassle, if you come across someone who likes to take their time thinking before drawing. And even the drawing might také time. 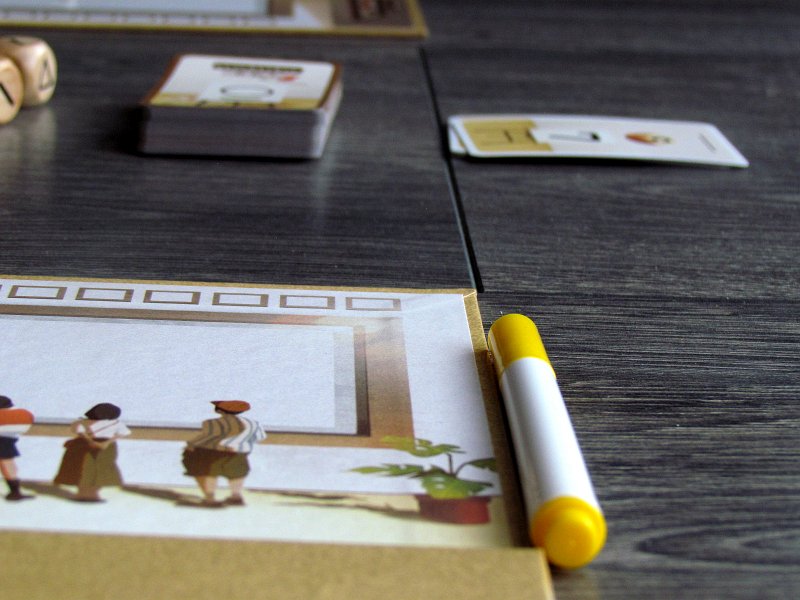 Unfortunately, in terms of the mechanisms in this competing variant, there is one fundamental problem that spoils the overall impression. This is the moment, when players have to call for guessing and where purely speed matters. It’s weird, so somehow it doesn’t work. It is never clear when players can start calling out their claims and it often happens, that two people register at the same time. It would work much better if everyone could guess at the same time and secretly. Or the one with the fewest points could guess first. Everything is better, than the current state.

But rivalry is not the only way you can play Geometric Art. In two (but also higher) players can sit at the box and try to test their harmony. Again, everything is very similar, only the participants guess each other’s pictures and try to be successful in it. They need to achieve as much success as possible in five turns. 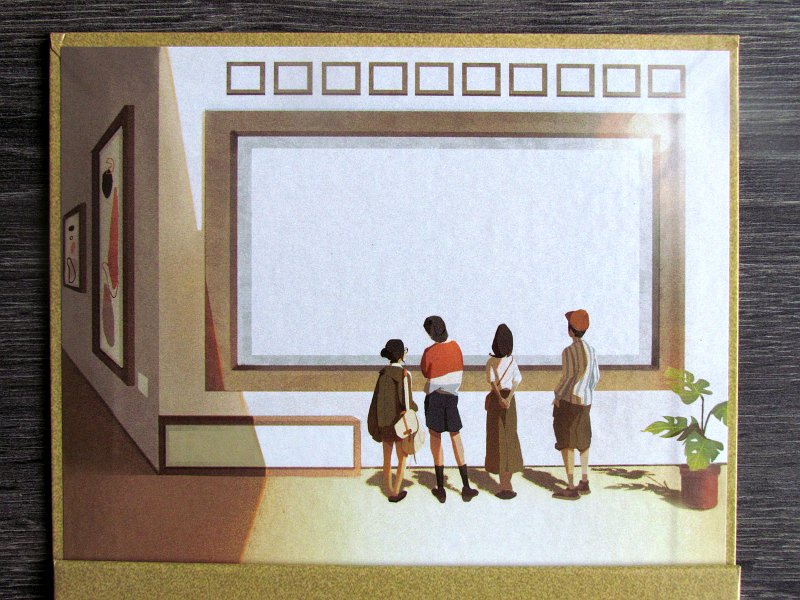 In both variants, players also have skill cards available, which allow them in the game to bend the rules a bit. The use of the card must be timed correctly, because it is only for one use and will improve the drawing conditions for its owner.

And while the cooperative game starts already with two participants, the classic basic version requires three players. That’s because there is no one to argue against in two. The more players, the better for the rivalry game. Participants do not have to worry about the total length of match, which can easily fit around twenty minutes.

Processing is smart. At the bottom of the canvas is a hinged part, under which artists can hide the name of their work. The boards are solid, so its nice to draw on them. The box also includes the necessary markers. 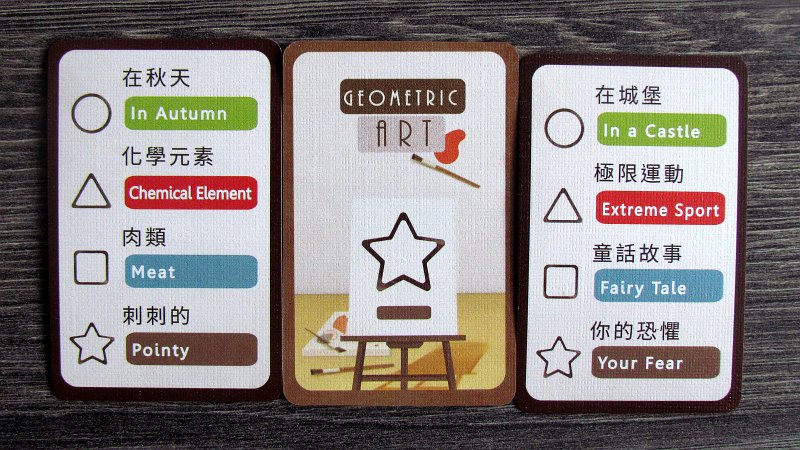 Unfortunately, Geometric Art does not bring anything new except the icon set. It’s a drawing and guessing game like any that has been here before. This will not save either the speed of the game or the cooperative variant. In addition, there is a major problem with the part, where players report for guessing. It should be about speed, but that’s not quite true. Nevertheless, Geometric Art will offer interesting moments when participants try to build a meaningful picture from symbols.

- strange phase of reporting a guess
- nothing significantly original

Geometric Art is a game full of guessing. There is not so much drawing, because there are pre-set symbols, that just need to be redrawn and put together correctly. So the game will mainly test your imagination, but overall it is not something exceptional. The gameplay here is solid, but don't expect anything original, whether you use a rival or cooperative variant. In the main one, players compete, but also fight over how to be the first to guess the picture. Everyone is applying for this role at the same time, which is a strange solution. Geometric Art is a solid game, but also with one contradictory moment.

by Dušan on 11. 05. 2020
I’ve always had that ability. Look at people and know what they think right away. Magicians call it reading thoughts, but I have a different name for [...]
Comments
Leave a reply