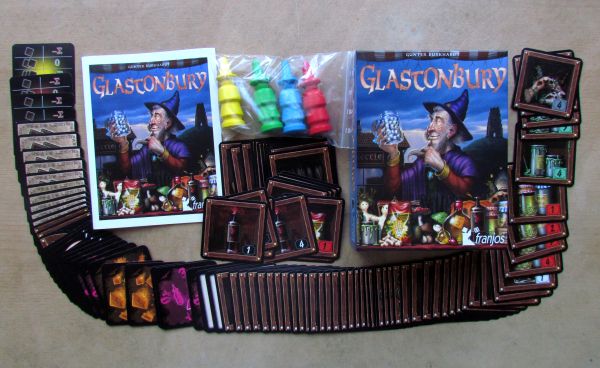 No wizard can do anything without the pot, so when I first arrived to magic street, I immediately set out to buy one too. The salesman was frowning man with a gray beard. He looked as if he was perhaps a thousand years old. Wrinkles on the forehead were so deep, that smaller mouse could be lost there. As a matter of fact, there was some kind of string hanging from there. But when I told him my desire, he lit up and told me about, how no one goes into his story anymore, because everybody is pulled to magical supermarket on the main street.

I chose a nice patterned pot and paid him well. He admitted, that he knew a spell, that would attract people back. But to cast it, there is a correct procedure, that has to be followed, and his hands are shaking too badly. I did not hesitate a moment: I have the old man to help him get back his customers. Together we will mix a potion, that will bring them back.

Work with bubbling cauldron and mixing liquids with a huge spoon becomes your main goal, when you sit on in front of the box bearing proudly name Glastonbury. The author is a well-known designer Günter Burkhardt and original version of game was released back in 2001 under the auspices of Goldsieber Spiele by the name Kupferkessel Co. But now Glastonbury got a new decoration by Franz Vohwinkel and returns from the printer of Franjos Spieleverlag – guys, who have a very good sense of finding good and simple games. 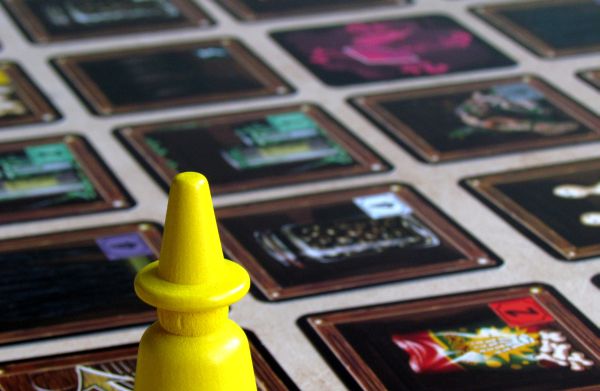 You certainly will not resist tension, when you open the box with a picture of a wizard bowing over his magical cauldron. What is he cooking in there? We will not know this, but you can try to mix a similar concoction, if you will. To do this, you need to pull everything from the inside, starting with cardboard sheets full of ingredients. You will not find only 72 basic ingredients, but also ten magic spells, four corner cards with an arrow, another quartet of player pots and help cards and even recipes. Two immutoes changing shape enclose a list on 106 square tiles.

But this impression of punch-out pile is easily overthrown by four wooden figurines of wizards, which will players stand in front of them. They are really huge and we have perhaps never seen larger figures before in a board game. Whole game is on its journey accompanied by simple German and English rules, that will teach you how to play Glastonbury. But we can do it together in the following articles as well.

At the beginning, you shuffle all 72 pieces of ingredients and randomly select tiles to create a grid measuring six by six. All these substances are put picture side up, so you instantly see, where which ingredient is. Only four corners are left empty, because they will be seized by corner tiles with arrows. They together form a clockwise circle. 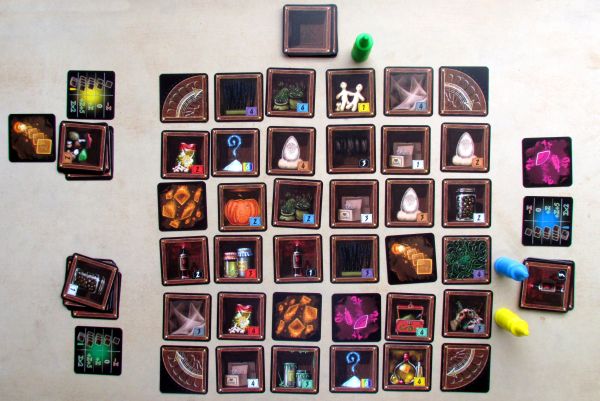 Each player chooses one giant wizard pawn and puts it to corner of his selection. One corner can host even more, than one character. Each participant puts in front of himself a help tile and pot matching its color. Now you will add all the ingredients into it, by putting them over.

One player starts by moving his pawn. Number of steps, you can move forwards, is equal to number in the lower right corner of your pot. You may notice, that same values are printed also on all pieces of ingredients waiting to be captured. A good guess is, that value of the upper tile lying on your pot, will always set new number of steps for your current turn. You move around the outer edge of board and with each step you move one row or column forward. The rounded corner tile counts as one step too.

Once you use all points and figure stops, player can choose one of tiles in an adjacent row (or column). Thus he always has a choice of six tiles at start of the game. Creating gaps are immediately healed from drawing package, if there are still some ingredients in reserve. Raised tile will in most cases cover your top tile (in first turn your pot), so only this ingredient is visible. During the game, one is forbidden to look back on contents of his bubbling liquid. 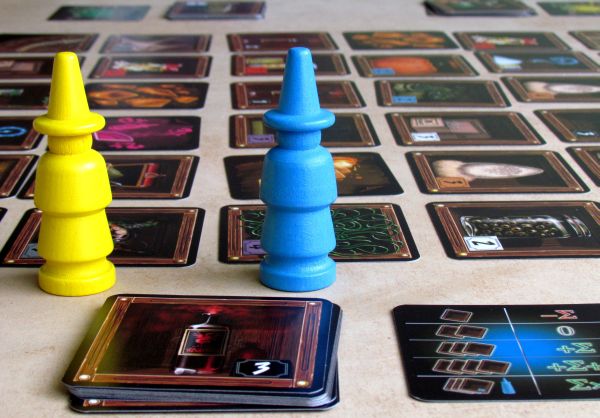 But it’s all a bit different, when it comes to spells. Not only no one puts them into their pot (you put them next to it), but they also allow players to break a number of rules with their ability. For example, when you stop figurine in the corner, in normal circumstances you cannot pick any card. But Declinatio spell will enable you to progress one step further.

Once players have completely emptied tile reserve, and it is not possible to add new ingredients, it is time to score your creation. Everyone looks at the contents of his own pot and sorts the pieces into groups by type. According to their number, they can bring either negative points (only one card from a given species), zero points (two tiles) or plus points (more than two). Values (whether negative or positive) of all types are then summed up. In addition, collectors get five bonus points for a set of four identical tiles. The player with the highest score wins.

Glastonbury is a nice family game, in which you are trying to collect sets of identical tiles of ingredients. But this is not a challenge also for advanced players, because strategy in this game clearly floats on the surface. Although there is not much to explore in depth, gameplay experience remains surprisingly high. 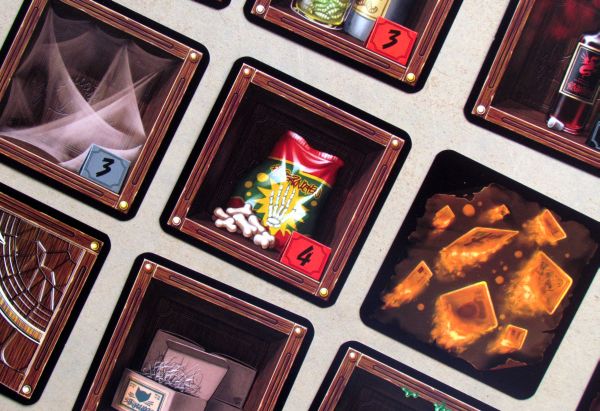 Games are distinctly different, because tiles are ordered differently each time. And yet, each game lasts only thirty minutes, during which time you manage to seamlessly acquire all the ingredients. It basically does not matter, how many collectors are in the game, but note that with duel, it is much easier to get more cards into your sets. It is a four game, that is much more exciting and full of indirect conflict.

It’s actually such a classic, that many people called “kettles”. This means that the game was already put to the test of time and it therefore actually does not surprise us that much, that it plays beautifully. A simple mechanism of circling around gives you complete control over development of the whole situation.

In doing so, players become rivals in a subtle way. You can watch, what others are collecting and adapt your tactics accordingly. But you must not forget to also follow your own pot content, so you know, what you have in it. You cannot look on contents with one exception, which is Perluceo spell. Now with it, you can once again look at all the ingredients in your pot, but you have to sacrifice a move, in which spell is lifted from the offer. 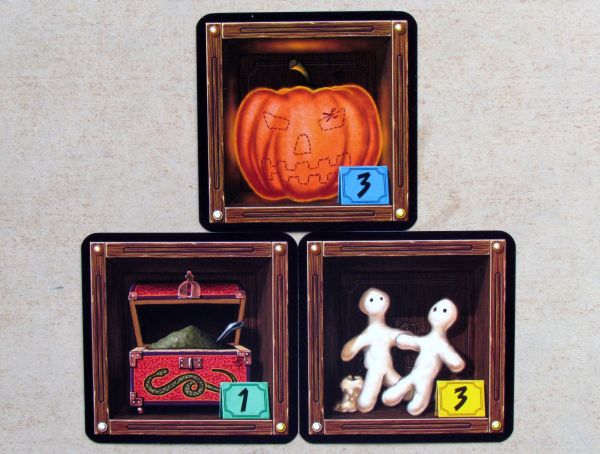 And just here, we will stop for a while now. Vanesco spell is the only one, that is fleeting magic, which allows you to attack enemy and discard one of his collected tiles. Remaining spells are persistent. As already mentioned Declinatio and second Accio (you know Harry Potter?). All these cards have numbers, that indicate number of maximum use, you can do with them. After using its ability, you rotate tile by ninety degrees and once you reach zero, you have completely run out of magic. Accio does exactly, what you would expect from it – it can fetch you any card from any place on the table.

Processing in graphics and quality of components is very successful. Wizard pawns are huge, because they are really strong sorcerers. This way, you have a constant overview, which line is interesting for you. At the help tile, you can immediately see scoring rules, so you do not even have to remember them. 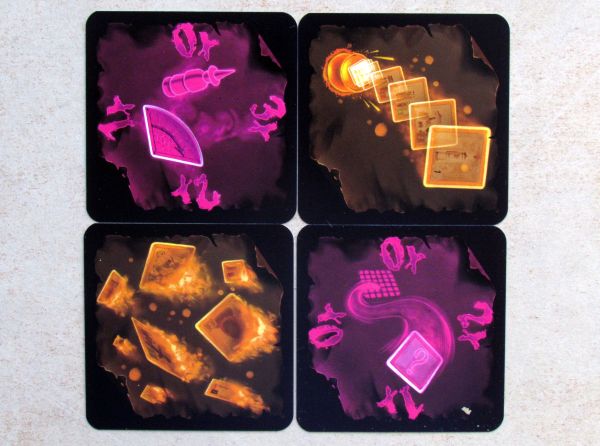 Glastonbury takes place practically without influence of luck. Players will fight among themselves for a set of ingredients, that have a different arrangement each time. But only with the correct number, you can celebrate your catch and get a proper combination. If you put just a little amount of each ingredient into the pot, you can even spoil the whole work and potion will be useless. Have you never cooked in a cauldron? You should immediately set that right!

Glastonbury is great example, how to make from an ordinary and easy family game an excellent fun for players of all ages. Rivals are moving their pawns around a grid with ingrediences and can always collect only those in adjacent row or column. But number of steps you can make each round is not decided by luck, but instead by value of the past tile picked up (the one lying on top of your cauldron). Thanks to this, you have to plan carefully and sometimes even pick up tiles, you are not interested in. Players are adding these ingredients into their kettle, so they are incapable of getting through them again in the future. Therefore, you have to add also your memory to the mix. Points are earned for sets of each ingredient at the end of the game. Match is fast and very family friendly, but it still remains excellent relaxation for advanced players are well. Beautiful processing suits this game so much. All these elements make Glastonbury a really great choice.