Review: Goblins Drool, Fairies Rule – to rhyme is to play 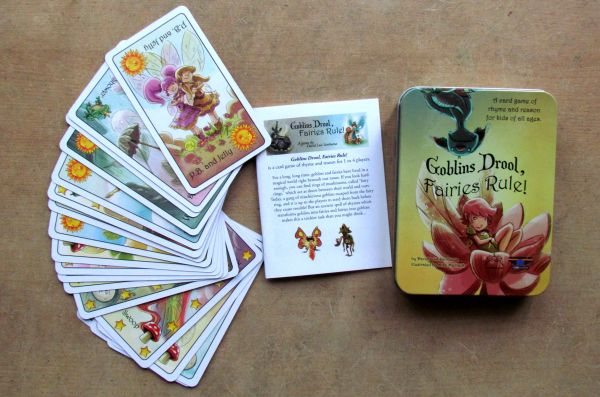 Light is burning in my eyes. I feel, that each beam, that falls on my skin is coming through and stinging me like a needle. I went out from the cold safety of the cave. I’ve never been in daylight before. My parents taught us, that right goblin always remains in the cold and dark. But the time has come to expand our ranks. We need to entice fairies to our shelter and with use of gloom, mud and witchcraft turn them into goblins. It is said, that only when we come out and sing a song, fairies will come and become enchanted with out voices.

Waves you wing, make your eye blink, rub a yellow butterfly, let him flow into the sky, fairy’s time is here, spread your arms and.. fear. Dusk is your world now, you before us bow, never find your way to light, on our side you shall fight.

On which side will you stand in this simple children’s game Goblins Drool, Fairies Rule? Will you help a beautiful, cheerful and playful fairies escape from the clutches of crazy goblins or do you prefer to save the green kind? Finally, you have these two options due to David Luis Sanhueza, who in 2012 created design of this game. With its completion helped him publishing company Game Salute and server Kickstarter, where they received $ 27,000 although they originally requested a mere five thousand. Even this partial success has certainly share, that Mike Maihackas illustrations are so delightful. 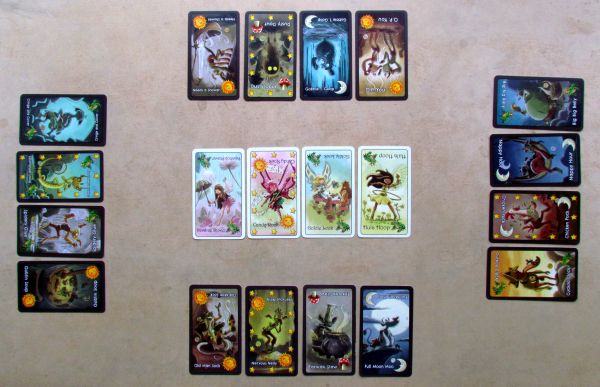 Because it is a simple card game, it can be found in a metal box with a picture of fairies sitting on a flower, with a green goblin, who looks affectionately at them from the ceiling. Dimensions of the box are occupied together by rules guied and twenty doublesided cards.

And while fairies are creatures of light, goblins live in darkness. That’s why on the one side, you will always find a picture of day, while on the other image with green monster hidden in the gloom. Each image has one of four symbols (printed in the upper left and lower right corner).There may be sun, moon, toadstool and frog. Some cards vary in stars around, which give them special abilities.

At the beginning of the game, you shuffle deck so that all cards are turned up with goblin side. Each of players is dealt four of these cards now. They should not look at its opposite side and place them in front of you, that they can be seen by the other players. In the middle of the table, you then place four cards with a fairy side up. 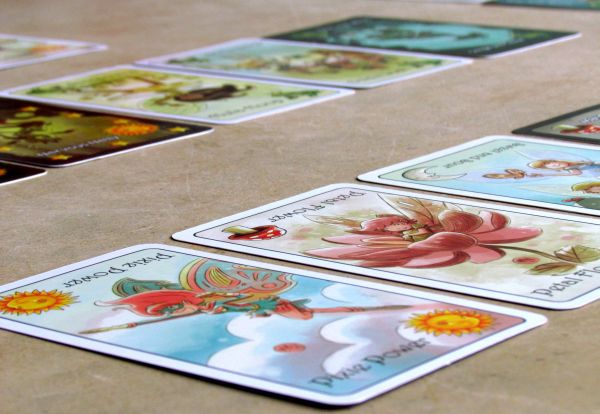 On his turn, player adds a card from his hand to the center, where fairies are lying (at start of the match). He is trying to create a rhyme with any of the other cards. Any such card is immediately turned to its opposite side. Only now, players may invite fairies and goblins into his arms. He now takes back all the cards, whose symbol coincides with the one on played card. He can therefore get more, than one card from this action.

By using this simple mechanism, players try to be the first ones, who fulfills one of the two victory conditions. Protector of fairy kind is the player, who first gets rid of all the goblins in his hands. You can get also win for goblin side, when you get six fairies into your hand.

Goblins Drool, Fairies Rule is a really simple game, that attracts mainly young children. Its seemingly big part is rhyming, but kids do not need to read them in order to win. It is only used for creating pairs of cards and few phrases can be learned quickly to read. In addition, they are funny and have interesting pronunciation, such as Hula Hoop rhymes with Salamander Snoop, while Kokopelli needs to be paired with Nervous Nelly. 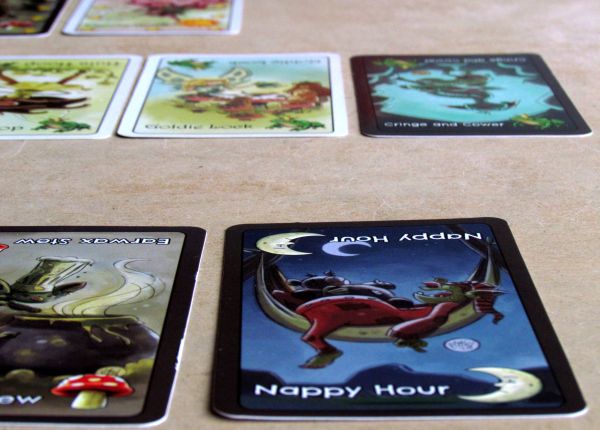 Surprisingly, there is essentially no need for knowledge of the language to play. Children only need to know the letters, so they can put together words. English as such, gives meaning to names, but is not absolutely essential for the game. Yet the inclusion of rhymes in card games is a good idea and will delight all, who love to rhyme a little.

Using the correct symbols at the right moment remains the most important thing to do. Its the only way, you can get rid of goblins and save fairies. Mechanism is simple and it also indicates a short game period never exceeding fifteen minutes, sometimes even coming to a ten minutes period.

We did not mention importance of star cards, that allow players to immediately turn around all the cards lying in the middle. This can completely change course of the game. All cards are open, so every now and then, you know, how are others doing with finding their cards. 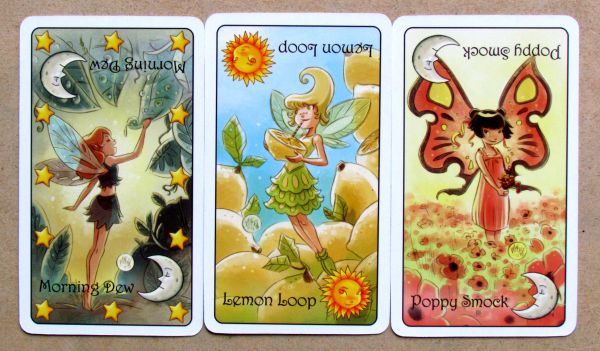 The development of the game is, of course, affected with random cards dealt at the beginning. However, it is clear, what is on the other side of your card, because images always come in pairs. When sun is on one side, you will see a moon on the other. Toadstool connects with reverse image of frog sticking out its tongue on you. You can then easily plan with cards you have and enjoy this game.

Rhyming remains only a supplement, offering you chance to rotate cards. You can always find pair according to ttwo to four last letters of each name (oop, ock, our, ew and elly). But this is not a game only for a small players, but also works very well as a fast family fun, which includes tactics and options, and all this with just twenty cards in a box! But its still not so much luck dependent as Love Letter.

How does the composition of the cards changes on the table in front of you, you can also change your strategy. Two victory conditions guarantee, that players will try for a different things. In the game, there is no draw pile and game has nice dynamic in numbers of opponents, while remaining real fun. 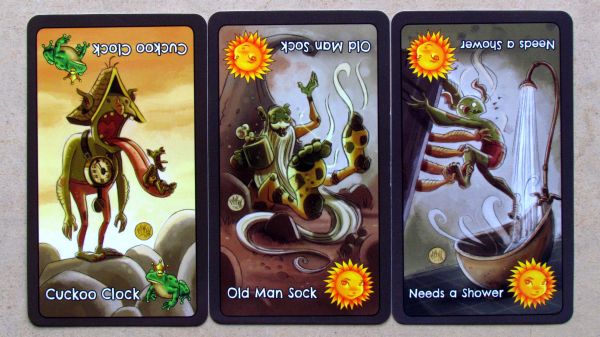 Cards are greater, than those classic dimensions. It also allows not only the characters to stand out much better, but especially to see clearly those beautiful illustrations, that are everywhere (as well as in our photographs). No words can describe it, except for the fact, that in our opinion, it is the best graphics in the game for 2013. Wonderful detailed illustration of both bright and dark sides are always fresh looking.

Goblins Drool, Fairies Rule is a beautiful little card game. It is designed especially for small children, who enjoy it the most, but it will entertain the whole family. It remains for us to be happy for the fact, that this game was created in the hope, that it will find a way to your hands as well.