Review: GodZ – guide how to choose right god to worship 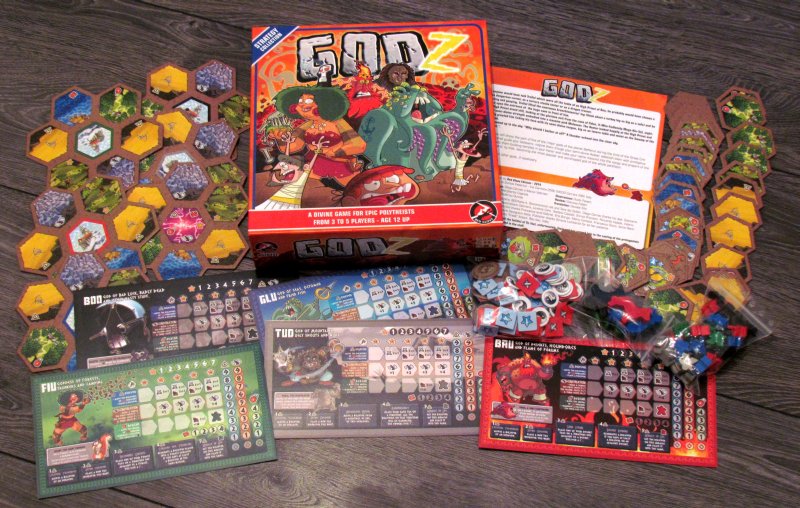 Gods and their pets. I have heard always just useless chatter from our priests about them. Only personal experience has changed me. During a walk, I met a fiery Bau. It was he, who told me, that all this talk of setting up the other cheek are just crap. Priests need scapegoats. But I do not have to do anything like that. I rise up and fight alongside the gods. Their war is holy.

Skirmishes are getting better times (at least in terms of our experience) in box titled GodZ. That new game comes from heads of the two authors:  Cerro Diego and Marco Valtriani (co-author of Super Fantasy). It was published under flag of Italian publishing house Red Glove in 2014 and their team brought the box with them to fair Spiel in Essen. And even with unique illustrations by Guido Favaro.

Boxes looks truly unique; it is not casual. Its orange jacket is dominated by illustration of different crazy characters. This makes it harder to intuit, that these are THE gods! And inside this box, it literally boils with aura of supernatural beings. Main deities have their own long cards, that contain a pile of strange symbols and scales. They match actions, but also raw materials and power. 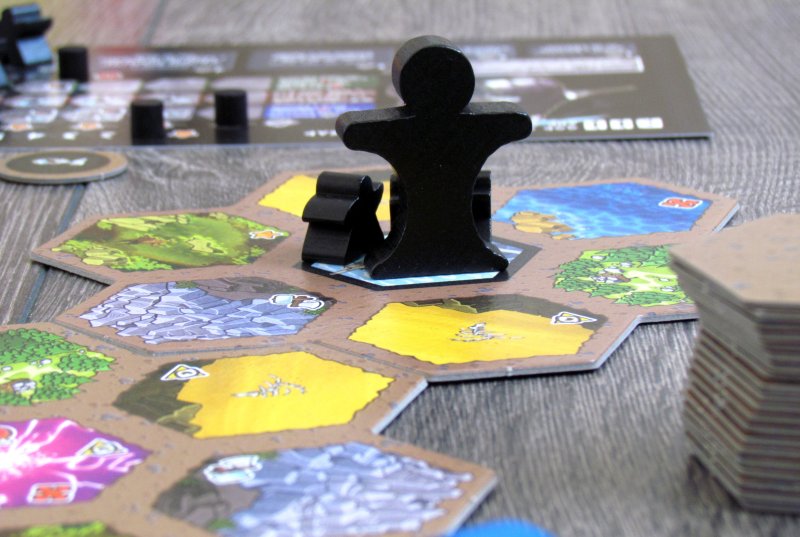 For their marking will very happily offer their services columns, which are starting list of wooden components. Among these will be players delighted the most by six avatars, each corresponding to one God. And then there are thirty worshipers, that are already in form of those usual meeples. Cardboard components will create the whole environment: large boards of regions, small pieces of territories and tokens (temples, battle, glory and balance).

At the beginning of the game, each player chooses his god, and gets all his equipment, mainly big overview board, wooden figurines, but also home map tile. His own board is then fitted on starting positions with columns, that will track status of his kingdom during the game. Together, parts of the map create (linked to central part) the world and in its center stands a trio of believers in each color. Together with incarnation of each playing god. Remaining three pawns are placed on predetermined locations on private board, where they can be retrieved later. Besides the common board is created tokens offer, of which only fame tokens are limited by number of players.

Each player has primarily available opportunity to use events during his turn. There are always three options on offer – to use believers force, their avatar or to build. But before any of that can really happen, player must always take his column from its previous position and slide it to the next column to the right. This may open his chances to take some specific actions later. At the same time, the more his column is to the right (it shifts for every action) the less profit he gets. 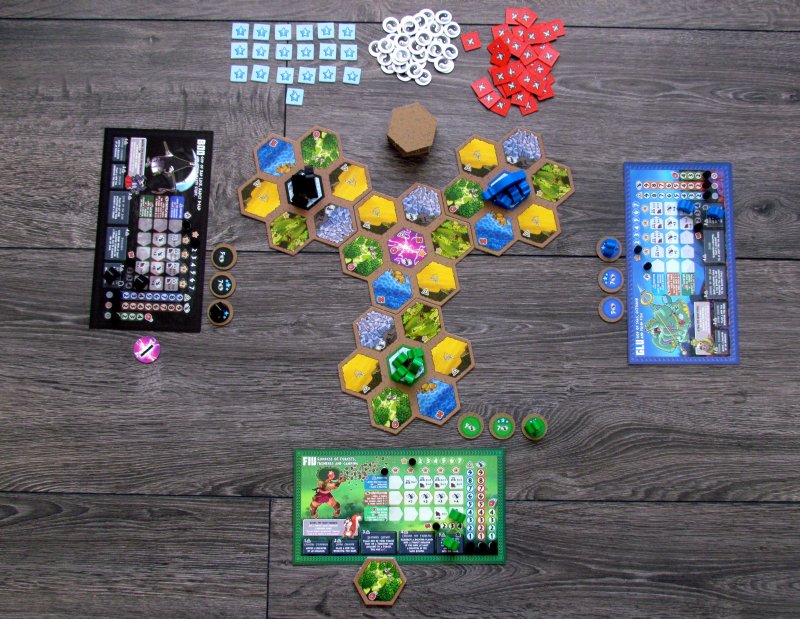 The first action allows player to bring new troops or figurines to the board or to move them. But it all costs points of faith. And if his column stands well, he can even attack enemy positions (units and temples), if there is any. Likewise, player can move and attack incarnation (avatar) of another God, but this time by spending food. And third action offers temple building for architectural points.

Instead, player can collect all the glory and move his column back to the start. The later he makes that move, the less profit he gets, but the more powerful actions are available. When he returns back to the start, stars are subtracted stars from his current fame (on the scale) based on last column visited as a penalty. On the other hand, he gets fame counter of the appropriate value.

After actions (or fame collection), there are two other compulsory phases of the turn. First of these are miracles. For this, player again needs points of faith and a choice of every player is based on options listed on the card of their god. Then players re-count their flow of resources, that is currently brought to them by their faithful (from the occupied fields on the map) and locations. 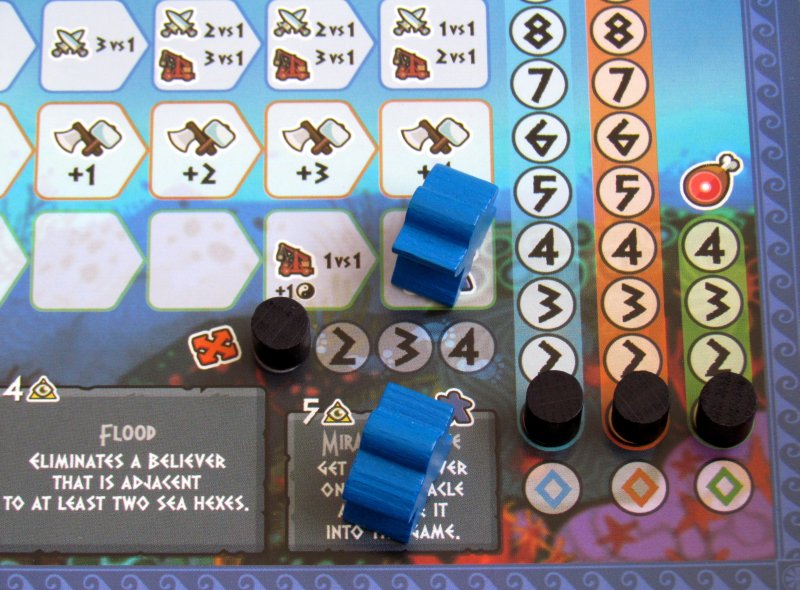 At the end of each round, players are entering into a new one and everything turns from the beginning. Map increases, as well as conflicts until the moment, when someone in control of territory reaches total of six points of war and glory summed together. Then players improve their existing points with rewards for controlled regions and special places. Only after that, the overall winner is known and will sit on the divine throne.

GodZ is actually a civilization game, that hides behind a huge body of gods. Players have now control of all their faithful and lead the Great War. Game uses a clever theme, mainly in the form of miracles, that can be performed. They are really interesting and a little different for every god. But even the very atmosphere of the game and feel of the divine is present.

Everything largely revolves around actions and movement on the board. It is initially quiet, slow, but as the game gets into later stages, everything picks up on the slope. Contacts are on agenda of each round and location control is constantly changing. 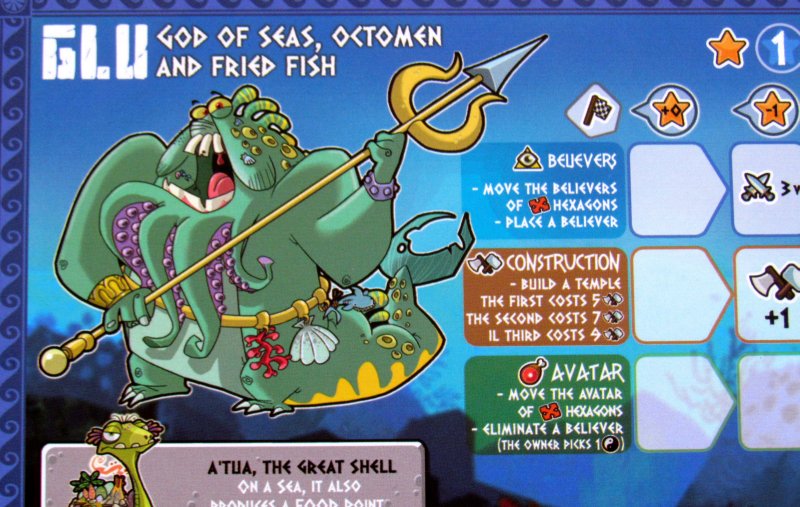 Absolutely essential to the game is influx of the faithful. This can be in fact endless. Whether they die in any numbers in one round, there will be new ones in their place in the next ready to lay their lives for your cause. You just have to have a little of that faith to spare, so you can again enlist their services.

Many players can be discouraged by complexity of Godz at first glance. Rules are already at an advanced level. To learn this game, you will need to read rulebook really carefully – and there is a problem. Its not translated into English perfectly and contains some inaccuracies. Additionally, there are heaps of text everywhere, that you must know and understand (English is truly needed).

Game offers primarily an immense number of options and strategies, that can be used. Thanks to this, you will come back to it. First few games are in fact mainly teaching matches and only then you start to really enjoy the game. Discovery tactics and capabilities is what makes this game fun. 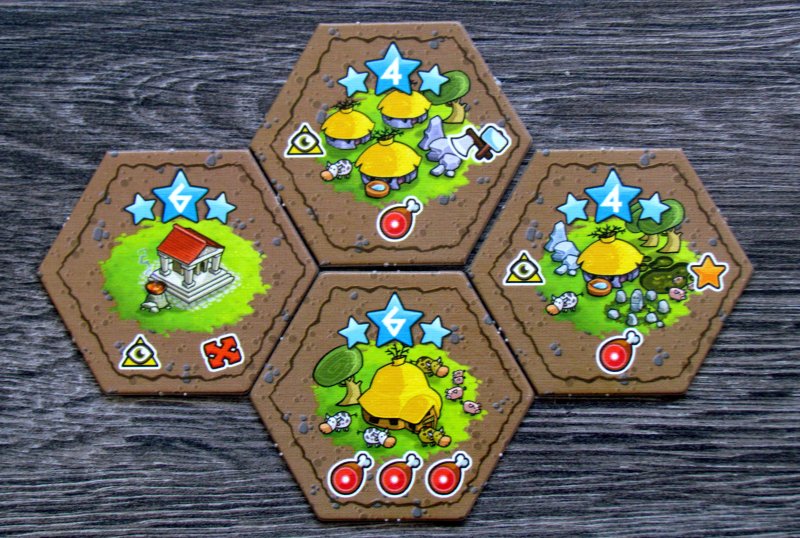 There is no luck. Everything can be controlled. The way to do it is a very interesting choice of actions, which have a clear offer with added bonuses. Marker progresses through action column and players count down the time to next round, that they must skip.

Thanks to very conflicted nature of the game, it is quite clear, that there should be at least three players to make things work. Fortunately map grows larger with number of competitors, so experience itself is not entirely dependent on number of participants. But this can not be said about game time. Ninety minutes are full of optimism even in three. Often, you will get into vortex of gaming for at least two hours. Fortunately, game content corresponds to it and it really develops with time, so you will not get bored at any stage.

GodZ is board game, that will excite all fans of old computer games playing as gods, whether its Populous or Black & White. Fortunately, it does not try to follow in their footsteps, but tramples its own path. Interesting and enjoyable one. It also benefits from exciting world of Super Fantasy. GodZ can certainly find numerous fans among lovers of challenging games, who love to play gods.

GodZ is a divine game. And now, we are not talking about its indisputable qualities, but about its theme, allowing players to become omnipotent. They will lead their followers around the map and force them to attack other nations in an effort to control territories and get points out of it. The path to such a victory is thorny and full of interesting and difficult choices. Game offers an original way of action selection, which forces players to miss a round from time to time. But their characters are simultaneously present in person at the map, which develops, expands and changes with each match. So players will not even mind, that this magnificent battle needs a heavy dose of time to complete. Its not easy to learn, because rules are full of errors. But, do not be discouraged by this or Godz complexity, because this game has a really solid potential beneath.