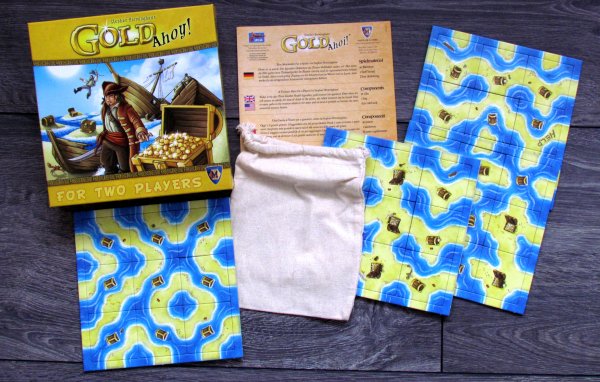 Each treasure we hid on the island is in danger. My archenemy, captain Tritts, found the location of our hiding place and just arrived ashore on the beach with his men. Race against time begins and I will not rest, until I can cuddle with every last gold coin, which I have buried on the island.

When we received package with the game Gold Ahoy! from Mayfair Games, we somehow did not know, what to expect from this game. There are only 36 pieces hidden in golden box, together with a cloth bag and rules unconventionally crafted in four languages in rows above each other. Only a few articles are enough for Stephen Herminghaus to explain his game to us. It was released in 2014 in collaboration with Lookout Spiele.

The path to the treasure was revealed. Everybody now knows, where chests are and players would do anything, to be there first. At the beginning of each hunt for gold coins, you pour all 36 pieces into a bag and put that aside. Both opponents now will draw one piece and starting player plays out the first one into the middle of the table. 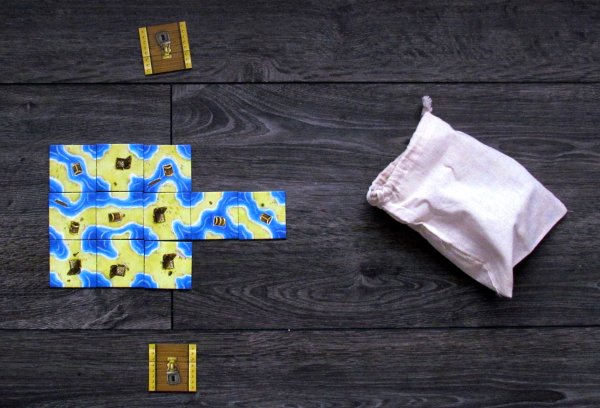 Then both players alternate in connecting paths. New pieces must always be adjacent to at least one already landed path. For the entire island is clearly defined maximum dimensions of six rows and six columns. This size must players never exceed. New tile must never be attached in a way, that it would create a new line on the side of the enemy. But that´s all restrictions.

Individual tiles contain a number of sand and water trails. And these are variously scattered chests on them, which are your goals. Players try to create puzzle so cleverly, to provide their pirates way to the coffers, without the adversary getting to them as well.

Once the last of the 36 tracks is placed, game is over and it´s time to evaluate, who owns which tile. If any player gets to spot, which second player can not reach, then these chests are his. In most cases, roads lead to treasure from both sides. In such a case, number of openings on player´s side leading to chest decide, who gets it. In case of a tie, nobody gets coins in this coffer. Each box with gold coins is worth one victory point. Player with the highest profit is the winner. 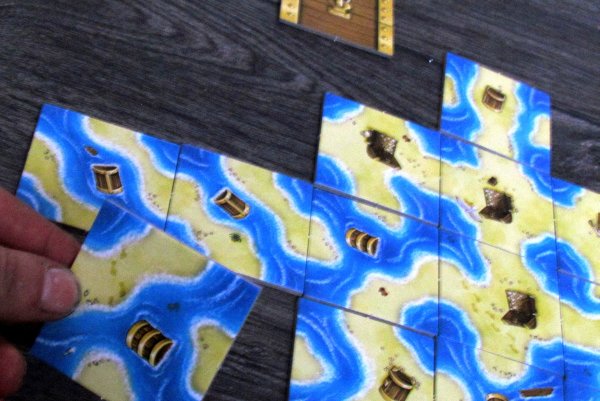 Gold Ahoy! is extremely simple game, whether one looks at rules or speed of the game alone. But it can also very easily become victim to its too common theme, because pirates do not offer anything new.

The game itself offers very interesting tactical possibilities, which are based on quick decisions. Laying individual pieces really has great importance and players can affect, how the whole fight goes. But they will not compete only with rival, but also with luck. At any moment in the game, they are holding only one piece and it depends on luck, how well it suits their plans. You can fix this by getting a second tile (and therefore have at least a basic selection) for both opponents.

But then there is game time, whose length can be tallied up on fingers of both hands. Clash rarely exceeds ten minutes, because playing 36 tiles is no challenge. Most of the time you have clear idea, about what you want to do. First, you are trying to get to chests and block rivals access. And then you must guide the paths to your side so skillfully, that enemy has less roads to it leading from his side of the outcoming board. 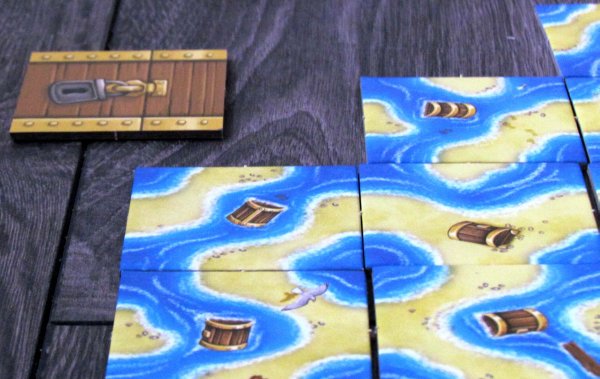 Fight is always ready only for two players. You can not play this game in other number. Both opponents are sitting at a table against each other and trying to outsmart their enemy. You never know, what tile has your opponent in his hand, but tiles are mostly similar and thus depends mainly on what you use tiles and what you do with your own possibilities.

Thanks to the simple rules, game is great for families and beginners. At the same time, even two adults might enjoy it. It certainly is not a game, in which you require immediately a rematch. Rather, it is a game to pull as a flash game for filing a waiting. The game still looks and plays the same after more matches, tiles are a lot alike and it is easy to confuse one game with another. But when you take a break, you will return to it again.

Boards are cleverly designed. Each one has mainland in center of each side, so they follow each other perfectly regardless of their placement. In doing so, you always create a slightly different layout and map of the island looks interesting in the end. Actual pieces are made of sturdy cardboard. Rules contain clear examples to help clarify specific mechanism of domination scoring. 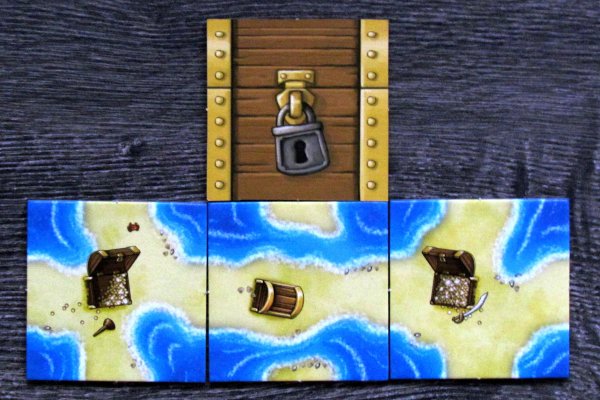 Gold Ahoy! can be taught to a small child in a minute. And you are already finished playing after few more. That´s where the greatest strength of this game lies. Speed and simplicity, while maintaining sufficient tactical choices for its scope. Thanks to luck and repetition, it will not be for everyone, but although it can cause a lot of average impression, inside the box titled Gold Ahoy! there is hiding interesting and fast-paced game.

- not for everyone
- random
- common theme
- tiles are similar

Gold Ahoy! is a game, in which players place pieces with paths against each other around the treasure island. Trying to create routes for their pirates leading up to the edge, so they can run and collect coins from as many trunks as possible. The race to win the whole match is done by having multiple entrances to chests from your side. The game is a tactical, fast, but it also depends on luck in the form of drawing pieces. Pirates are too common topic and the game is not suitable for repeated playing. But it can be easily used to fill in the brief moments, when waiting for someone. Gold Ahoy! is an ordinary game, but definitely would find fans, because they can quickly build against each other and decide, who becomes a rich man in ten minutes.