by Dušan on 22. 08. 2012
0
previous article
Review: Cthulhu Fluxx - monsters and detectives
next article
Review: 1989 Dawn of Freedom - what is the price for freedom?
Contents 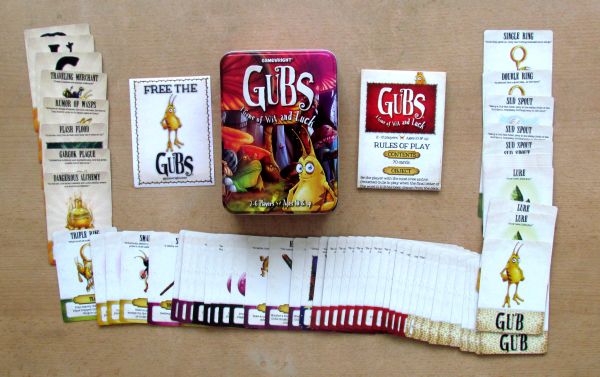 There is a hidden place in the rainforest, where sacred mushrooms grow. They make a tiny forest inside a forest. It is full of color and unusual smell. But you could not walk beneath mushroom trees, because it is too small. Mushrooms are of the same size as here, only have the craziest colors – red, green, blue and violet. And all of them glow in the dark, so if you go for a walk at night, you see the road, as if you were in town.

But how do you know all that?, you might say. It’s simple. There is a little yellow creature whispering to my ear even right now. You may just easily confuse them with a jumper or crickets, but this little squirt is all yellow. From head to toe. It has two toes on its feed and two long antennae on its head.

And he is trying to spread the message, that their mushroom world is at stake. His mission lasted a long time, before he finally found his way in South America in hands of Cole and Alex Madeirose. They took him to the U.S. to make his voice heard. And so it came to Gamewright company headquarters, and now to the Czech Republic, our home. 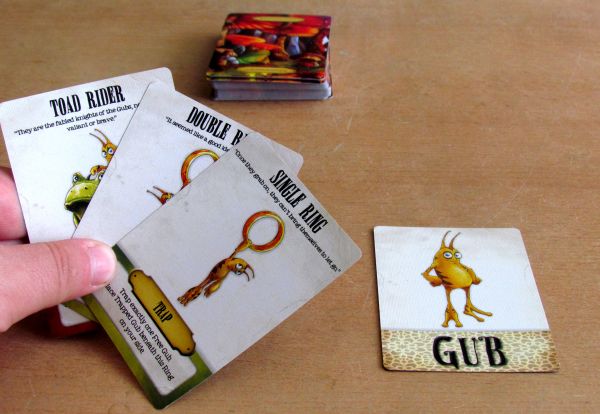 Life of these small Gub creatures is in jeopardy. Humans begin to cut down trees in their woods, where the mushroom forest is located. And now more wasps and other natural enemies of gubs found its way into their world and threaten them. This is because the forests are shrinking as well as living space for all the colorful inhabitants of the jungle. Some weaker gubs have even fell into captivity in America and people have started a petition “FREE THE GUBS”, with goal to stop the shrinking of the rainforest.

And now we have here a game called Gubs and its subtitle says: A game of Wit and Luck. The authors Madeira’s have been once the mentioned earlier – Cole and Alex – as well as the game publisher – Gamewright. This company is known for a lot of simple card games, like Sleeping Queen, Forbidden Island (review) or Dweebies, which will we review next.

But with Gubs and year 2011, there comes a new age in Gamewright gaming – new fashion in the form of metal boxes has struck again. And we like it, we will not deny that. This one has its lid hinged and is decorated with illustrations by Israel Woolfolk, a man with an unforgettable name, who worked even for a computer game Uncharted 3. 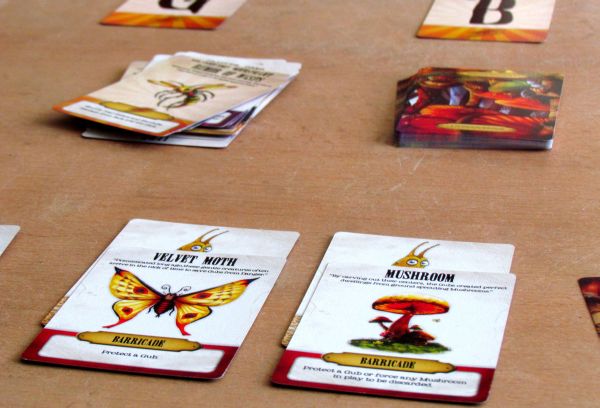 Inside the brightly colored box with Gubs, there is of course a large deck of seventy cards. They are wearing a variety of illustrations, as well as text describing their individual skills. Each card is wearing a gold plaque, containin the group to which card belongs. Cards name is at the top, as well as a short description characterizing the particular object.

If you list through cards, you can find a few of them, which are beyond this description. Above all, there are three letter cards – G, U and B. These three ones determine the game ending. And then there are gubs themselves. They look like one another in the deck and there is a total thirteen of them. And your task is to protect them from all dangers in the dark forest all the way until the end of the game. The more you take under your wings, the better.

The cards are divided into barricades with a red background, which you can use to protect your gubs, orange events, green traps, purple tools and finally black ones with only one usage: to break the gub barricades. All of these cards together create a deck in the beginning. The only exception, which you have to put aside, are those three letters G, U and B. You should also remove one gub for each player in the game from the deck. 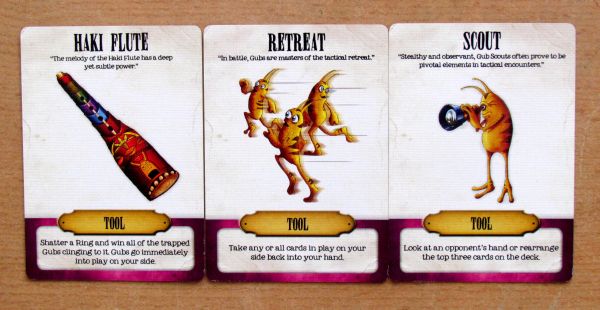 First, shuffle the whole deck without letters, then add one to the upper part, one in the middle and one somewhere below. Then shuffle the pack again. Whole this shuffling has only one goal, that the letters are not located in proximity to each other, as it would be not quite good.

Each of the opponents can get their hands on exactly three cards in the beginning. It must not be orange event cards – if a player gets an event among these three cards, he shuffles it back into the deck and takes a new card. The remaining cards, which are not in player hands, form the drawing pile in the middle of the table. The game is now ready. Starting player is choosen by the one, who suggested the match.

The player first draws a new card at the beginning of his turn. This activity is optional, so if a player does not want to draw for some reason, he does not need to. But not for two consecutive laps.

Now is the right time for action of the active player – he can play any number of cards from his hand from zero to all of them. Each card (except gubs) are wearing a text describing its effect. Each of them also belongs to a group (given by its colored background). You can easily identify, what type of card that is, and you do not need to read it. 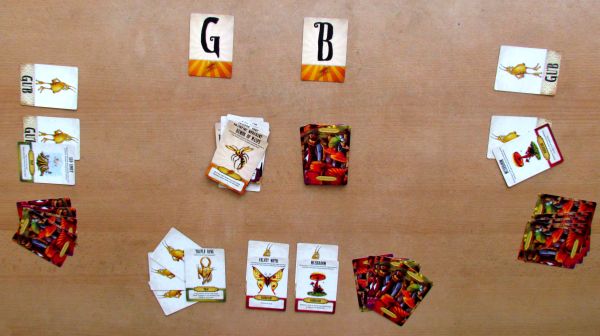 Gub cards are the most important and you cannot win without them. It is gubs, you play in front of you on the table as first, to take them under your wing. And now your job is to protect them, no matter what, while you try to harm your rivals.

This is possible with a variety of tools. To protect your gubs, you would most certainly need barricades. They can protect gub against the dangers (hide him), so that it is almost safe. Yes, almost, because of course, these shelters can be destroyed by your opponents. But you can be confident, when you play a red card on your gub, that he is at least for a moment safe.

You can also catch gubs into captivity using rings. You can capture a predetermined number of gubs anywhere on the table. Unprotected gubs are lured into a trap and unable to escape from it by themselves. 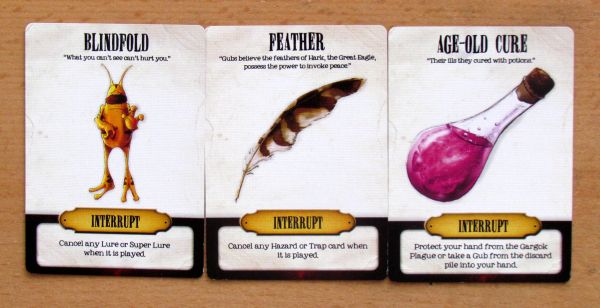 With the events, players can steal unprotected gubs from each other or harm them in another way. It is therefore possible to destroy the opponents barricade, and then immediately play the next card to drag gub under your protection, stealing it from your rival. However, the player can prevent a move away using their black defense card.

At the end of your turn, you only have to check the number of cards in your hand. You should never hold more than eight cards in your hands, so if that sometimes happens, you have to throw the excess on the discard pile. This is how your turn ends.

The whole match ends, when players draw last third letter of word GUB from the drawing deck. At that moment, all opponents add up cards lying in front of them and collect the points. The player with the most points becomes the winner. 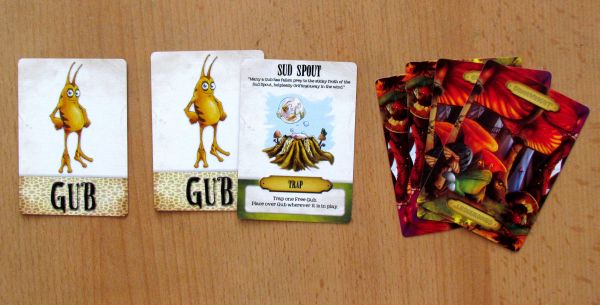 Gubs is really a simple card game. Only text on the cards make an age restriction, and because there are many and various, children must be able to read, to play this game. You cannot read cards to them, because the hands should be kept secret.

Magic of this game is its enormous speed and difficult predictability. You can never actually know exactly, when the game ends, because it is determined by three cards mixed in the whole deck. They could be anywhere.

Players may use two basic tactics in gubs – play gub cards from the beginning and try to protect them or keep them in their hand and wait for the right moment to play them later with some protection. Meanwhile, opponents may harass them and steal their yellow creatures or attack even their hands. So its not easy to decide, which tactics is better. 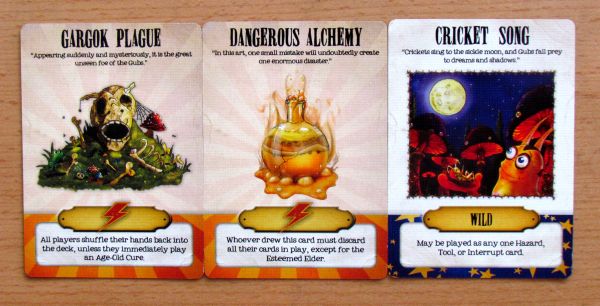 The game strategy is represented by playing different cards, planning events and attacks on the opponent. If you do not like attacking others, then gubs are not the right choice for you. But everything happens here in the light spirit and the game is over quickly, so even the losers have a chance to retaliate. And kids would not be so much disappointed with defeat. On the contrary – they have great chance of beating their parents in this! You will rarely play only one game of Gubs at a time.

The game is boasted by beautiful illustrations, which brings the whole gubs world to life. But the game deserves your attention not only because of graphics or precious metal case, which looks really nicely on the shelf. There are other reasons. It is a simple card game, that everyone likes to play, when there is a little free time or on the go. And you easily talk someone to play it with you. So what should you take away from today’s review? At least one sentence: Free the Gubs!

Gubs are really simple card game from Gamewright company and it offers lots of interaction in the package. Players are trying to save as many gubs as they can until the very end. But their enemies are not in the forest, but behind the table in their living room. Rivals are trying with constant attack to lure little yellow creatures away. Game has no strict ending. There are three cards in the deck instead and whenever the third one is flipped, its all over. That makes each game really uniqe. Everything is enhanced by fairytale drawings. Gubs are quick and quite chanceful game, which is appropriate for all undemanging players.