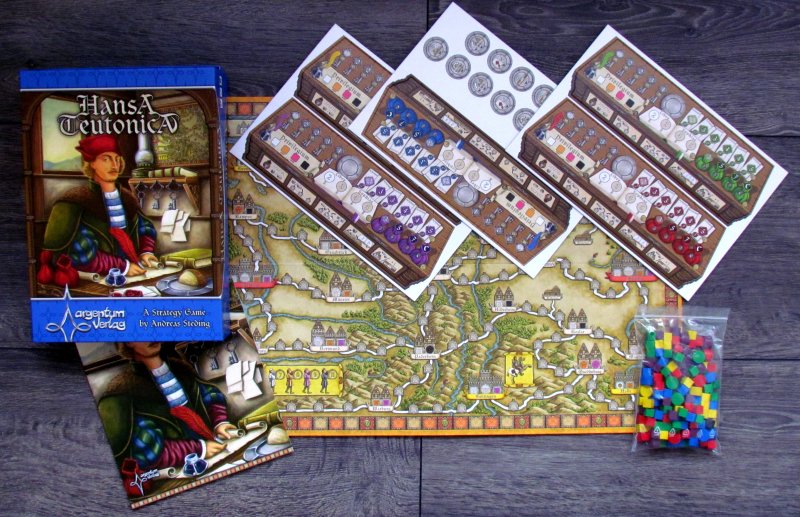 A few years ago, there was just a few of us. Work was scarce and our profession required a lot of self-denial, hard work and sheer dedication to the craft. But times are changing and people are starting to live in Germany in more consumerist way. It’s clearer day by day as demand increases, that traders able to provide quality goods will be loved by people. The time has come to defend our old ways and paths, that are suddenly teeming with speculator carts.

Merchants formed an alliance, which was called Deutsche Hanse. And because the Latin equivalent is Hansa Teutonica, board game, that tells its history, also was given this name. Its author is Andreas Steding (Firenze) and his work was released already in 2009 by Argentum Verlag company. Game has received high praise ever since, but we get to play it only now, six years later, and publish it in 2016. But this delay does not mean, that game has lost some of its magic and we are not only talking about illustrations Dennis Lohausen.

On the lid of medium sized box, we see one of the dealers signing a contract. Map hanging on the wall is of Germany. And this is precisely content of folded game board – main components of the game itself. We can find only a fraction of two hundred cities, that were part of the guild. But even so, there is enough of them and each has its geographic position silhouette with several positions for Kontors, a business branches (in different colors). Cities are connected via roads, which have also spaces for cubes on them and sometimes, there is even an inn. Board is adorned also with two scales – first counter is for completed Kontors and second records prestige acquired by players. 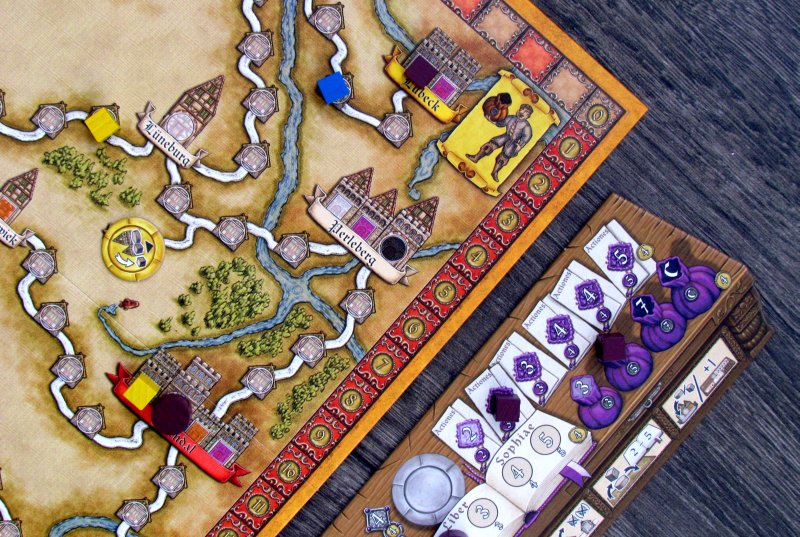 Game begins by choosing side of the board (number of players), and deploying bonus tokens to spaces with three taverns on the road. Remaining tokens are laid aside. Players then choose their color and get their cards of business headquarters (escritoire) and wooden tokens – cubes representing ordinary retailers and round tokens serving as dealers (most of them will be starting the game in store and not in the player’s possession). These stones will be deployed to five scales on player boards, so that each of them stands on first position of one track – it displays starting value of this ability. One piece must also be placed on a scoring scale.

Players will then alternate in turns. They always have several actions at their disposal, while their precise number depends on level of scale with envelopes. Initially, it will be two actions for each turn, but number could grow up to five. The amount is only a number, that gives us deeper meaning of activities themselves. There are always five to choose from and can be performed in any order and even be repeated.

And all those actions contain some manipulation of retailers or merchants, whether it’s new ones moving into player possession or their movement to the board. Cubes and tokens may be placed only on roads connecting the city, because path to occupy some Kontor inside city must be passed through dominance of supply roads themselves. 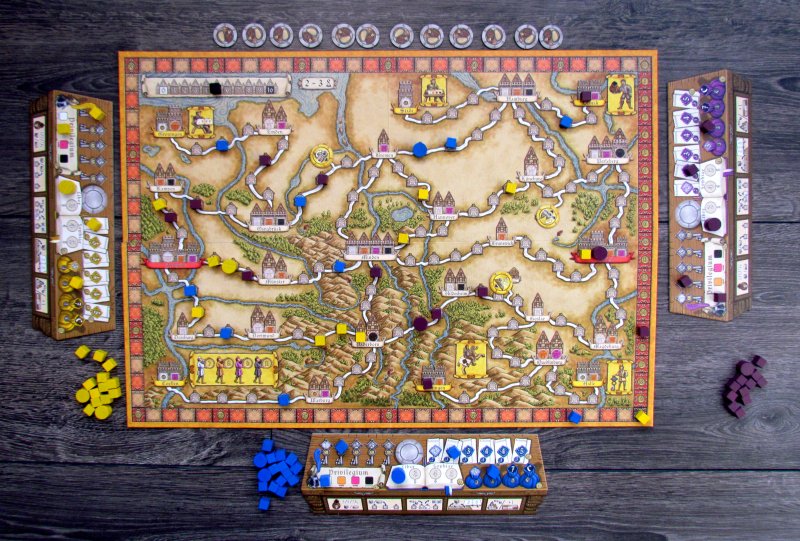 Fundamental concept of the game is however hidden in the possibility, that players can each other’s carefully placed traders push away from their current locations. For it, owner of new merchant has to pay one extra cube (moved back into stock) and additionally move merchant previously standing there to adjacent roads and owner gets one more cube to his reserve. Later in the game, players will also benefit from the ability to move their representatives between roads and spaces.

Most of these activities are somehow limited and, like the number of actions, they are usually bound to scale on player board. Thus, for example, only limited merchants can be moved for action. It is also possible to spend one of the action points for occupation of the city, but only when active player has full control of one of its adjacent roads.

If there is Kontor located also on the other side of that road, player has created a business route and will be rewarded. First and foremost in form of prestige points for neighboring towns under his control. He can move one of his cubes there from the route. In addition, if some special towns are linked, player is allowed to improve his skills and thus improve for example his number of actions in the following rounds. 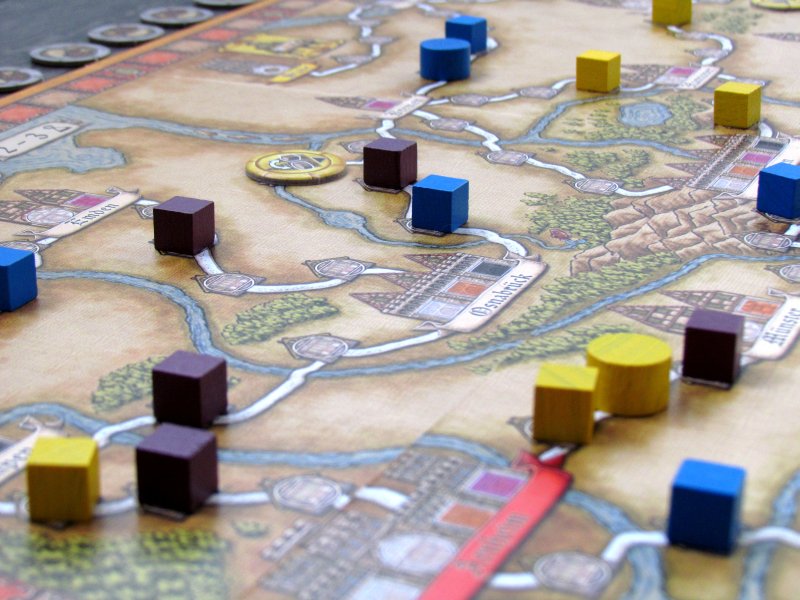 Game continues until one of the final conditions is met. Most basic one is to achieve target number of twenty prestige points (but it can also be caused by depletion of the bonus tokens stock or finished tenth Kontor). But victory is not certain for anyone right now. To collected prestige points have to still be added bonuses for fully developed skills, bonus tokens, controlled cities and network of neighboring towns. All this must be summed and only then, it is possible to determine, who is the actual winner.

Hansa Teutonica is primarily completely tactical game under control of players from beginning towards the end. Everything here is about territorial superiority, which can be created in different ways. But it must always lead to occupation of the city and pursuit of its control. But this is only one possible way to score points. Equally important is network of interconnected cities, that has the potential to deliver (evaluated by multiplicating player level on board with number of cities) a large number of points.

From the last paragraph, it is clear, that this game will be no stampede from the start to the finish. Each participant needs some time to pass every option through his mind, plan and calculate. So, if you are bothered by thinking and overall slower pace of the game, then this is not box for you. But instead, fans of counting will be absolutely thrilled, because you will not do anything else for majority of time. Moreover, it is pleasing to know, that turns themselves are far from being as slow as it seems at first glance. 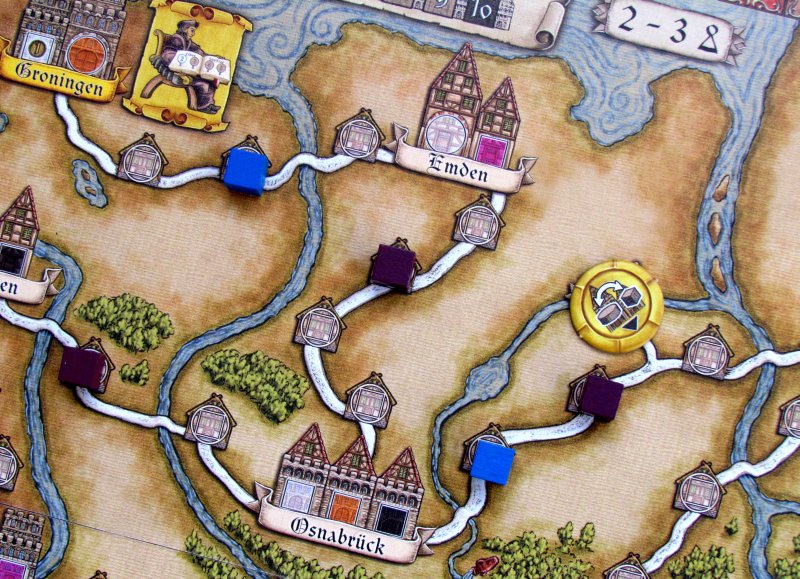 In doing all those point collecting, game contains a heap of options. There is enough actions, diversity and freedom in their choice, where participants set double-edged sword for themselves. No action is clearly right or wrong, because plan is constantly changing. Traders are spreading here and there and players have to deal with it. The mere five ways to improve your trading company, says it all. And it is this feature, that keeps the game very interesting despite its relatively abstract feel.

Entire game certainly will not be short and one hour is a reasonable minimum time required. In a larger number of participants, you should rather plan for thirty minutes longer and with slower thinkers, match can stretch for two hours. And with an increasing number of players increases also contact, which will occur on board. Replacing other’s cubes and trying to take over some of the paths is clearly apparent. And this is reason, that cause game not to feel as dry as you’d expect. Still, it is a pure euro, do not be fooled.

Although it all looks complicated, in fact, the game is very simple (setup is lightning fast) and rules can be learned quickly. Still, we do not recommend it for beginners, who might find themselves overwhelmed by a variety of options and would not enjoy course of the game at all. 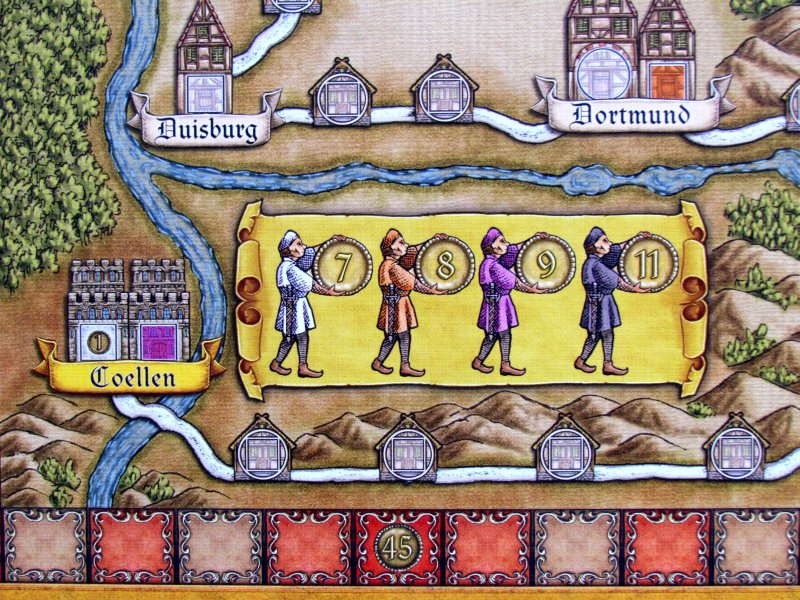 Hansa Teutonica is a board game for any serious gamer. Some run away, when they discover, that there are no dice inside. Only minutes and minutes of thinking. Still, game flows nicely, quickly (for euro) and can be a real challenge. Hansa Teutonica can be a good companion for many past and future evenings.

- dry euro
- not so good with two (less conflict-focused)

Hansa Teutonica is a great tactical game full of planning and thinking. No coincidence will help you, you have to honestly calculate it all by yourself. And yet the game allows to trample opponent's legs as you try to take over same routes and cities as they did earlier. This is especially noticeable in larger numbers, when game also shines the most. In two player, it is only good. Freedom of action is also worthy of praise for the players and five possible enhancements constantly keep your interest. Game has solid durability and will not grow old easily. Hansa Teutonica should be one of the main pleasures of every euro gamer.

by Dušan on 15. 05. 2015
No city will be here forever. Yet people are always trying to defend it, because this is their home. Kingdom, where they were born and want to spend their [...]