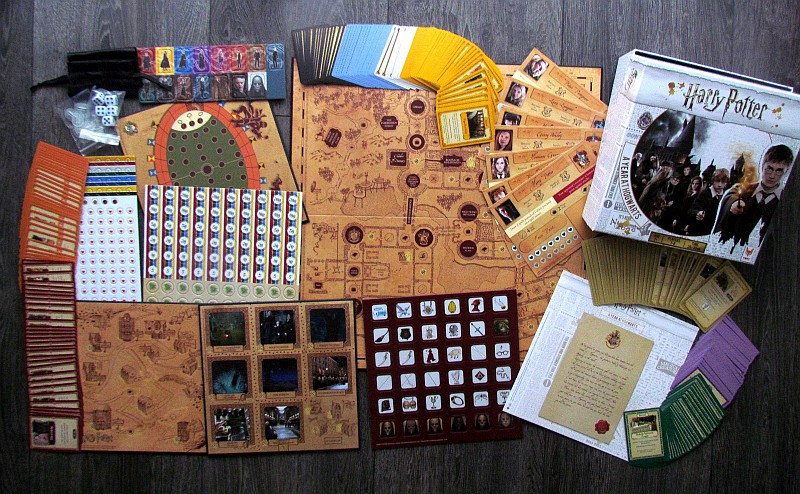 You have completed your first few years of study and you think nothing can surprise you. But then comes a freshman to your school and he is a magnet for trouble. Wherever he appears, there is some danger or problem. And why it has to be one of your best friends?. Everyone knows him. It’s Harry Potter.

And the new board game Harry Potter: A Year at Hogwarts, which was prepared for all lovers of this world with a Warner Bros license at Topi Games, invites us to Hogwarts. Esdevium Games is bringing the game all over Europe.

The game box is white but described by local school textbook extracts. There is an adventure waiting for players, which stuffs all potter adventures into one year. In preparation, everyone chooses their hero and hence the college. According to their choice, they will receive a miniature with a stand, a pair of tokens, hearts and a set of starting cards from books, spells and potions decks. Aside from this, they each receive five random missions to strive to complete. 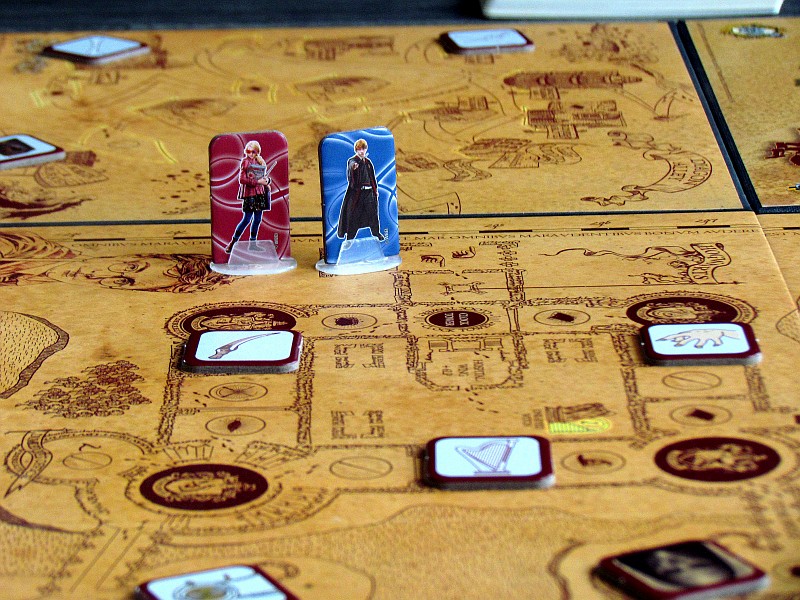 At the center of the table, players put together three boards, the largest with the map of Hogwarts, then the second with top view of Diagon Alley and the third with a lot of other locations differently fragmented across the whole wizarding world. On all plans, they randomly place tokens with items, that played a role in the adventures of a spectacled wizard. This is all ready.

The starting player takes a pair of dice, rolls with them and sets off with his piece from the starting position at the castle entrance. He can choose any direction, but he should use all the dots in the total. As they travel, they try to plan and take into account the items they need to succeed. It is through their position, that he must pass to pick them up and take possession of them. 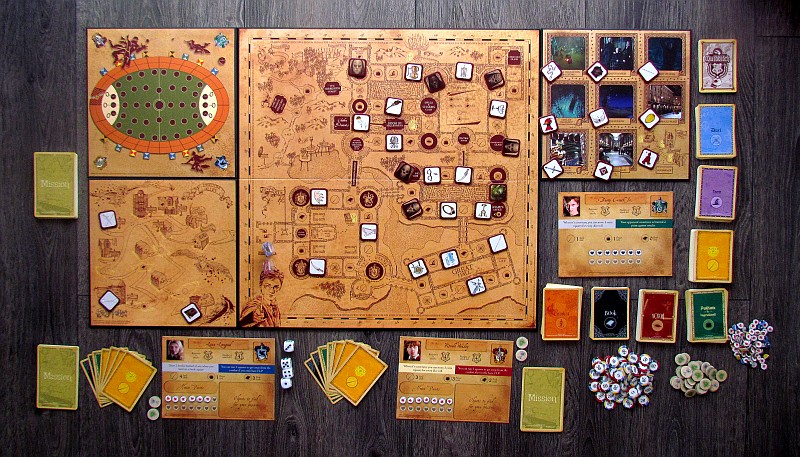 With all the running around school, players can attend classes. All they have to do is to have the necessary books and they immediately get the number of points printed on the card when they stop at the position.

When two pieces meet on the board, they must compete in a duel. Different situations await them in other spaces, as most have some pre-printed icon on them. Usually, this means that a player can take a new spell, book or potion card. But from time to time, he stops at the position of a duel where the enemy is waiting. Death eaters are hidden in random towers.

Combat is a simple comparison of the dice roll results with the opponent’s defense. Any dice that exceeds a value is counted as an hit. Therefore, if the attacked party is unable to defend itself, for example with the help of cards. 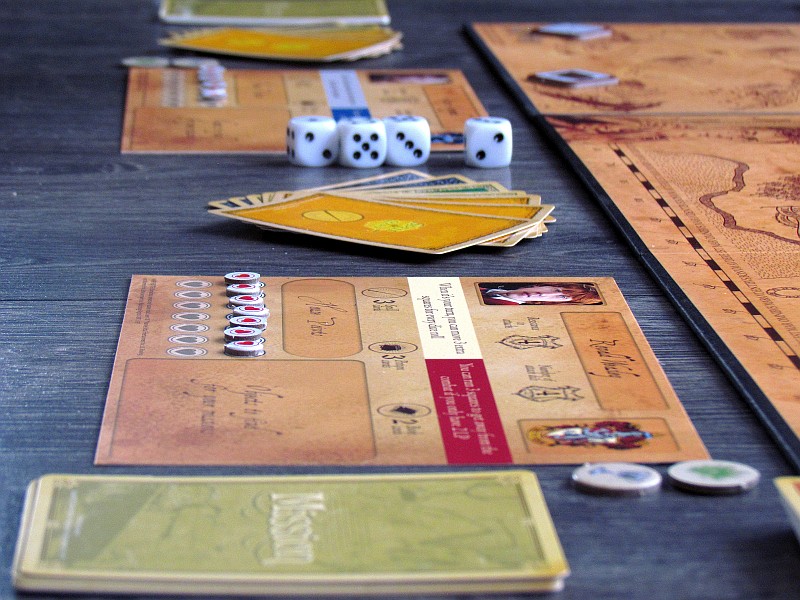 All players try to accumulate items, spells and potions in order to fulfill their mission. It also specifies a place, where the player has to be in the end in order to try to complete it. If the equipment is complete and arrives at the desired location, it will be the final battle.

But even a completed mission may not be enough because each card (secretly held) has a different point value. And when opponents set a higher point goal at the start of the game (there are three options to choose from according to the desired length), they also say they want to achieve more successful missions to win. Whoever accumulates enough points in the sum of the missions and classes completed is the winner immediately. 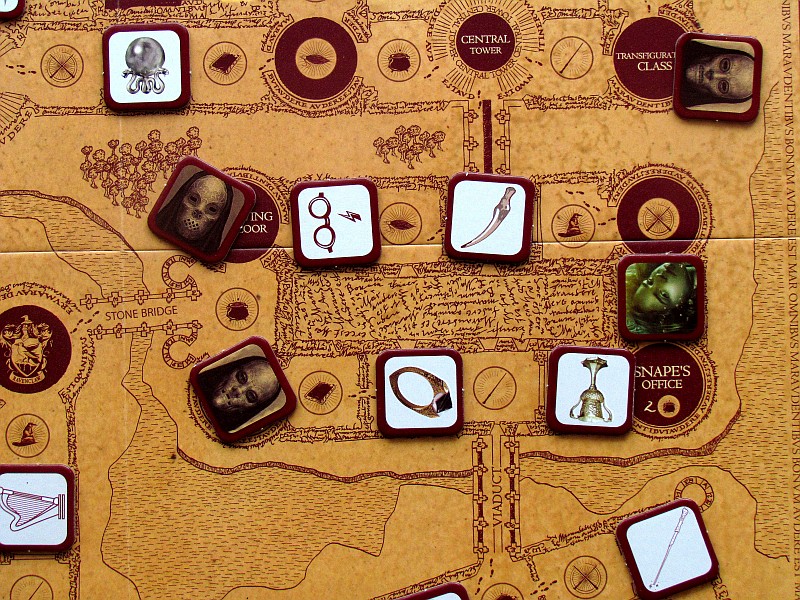 Harry Potter: A Year at Hogwarts seems to have a smart approach. The game wants to convey all the adventures of Harry Potter and his friends in one game. Players, just like book and movie heroes, need specific items and spells before they can deal with (for example) basilisk. And this effort for stories within the story deserves the greatest praise.

Unfortunately, the actual implementation remains beyond our expectation. The first problem is already running around the board itself, which depends on the dots on the dice. And because a player can stop prematurely for only two prescribed reasons, the game usually turns into a painful effort to find a way to reach the desired icon. Of course, this does not involve items. You can only pick them up by running over them. But if you have lost hearts in a battle and want to heal, try to visit an hour of defense against black magic, or are looking in vain for a particular potion, then you will circle back and forth and waste your moves in vain attempts to land on a particular space. 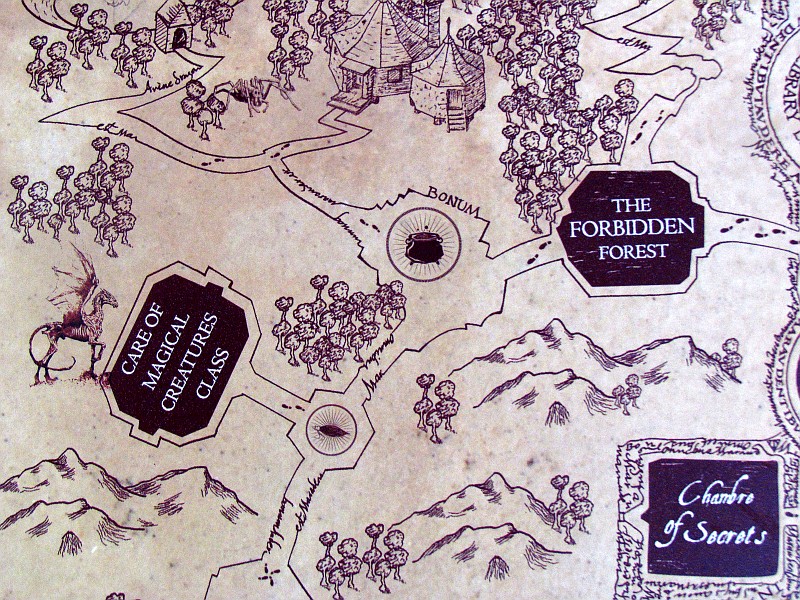 Players can (and even must) attack each other. This means that both parties always come out injured and the other participants benefit. Even if the winner gets compensation at least in the form of some card rewards. In general, however, in order to complete a mission and a successful final fight, the characters must be fully healed and have as many hearts as possible. Only then can they challenge some enemies succesfully.

There are many variants to choose from. Players can play in a simple way without complicated battles and the need to collect specific cards. This is an advantage because getting a precise spell or potion in a shuffled deck is a superhuman task with dice involved. 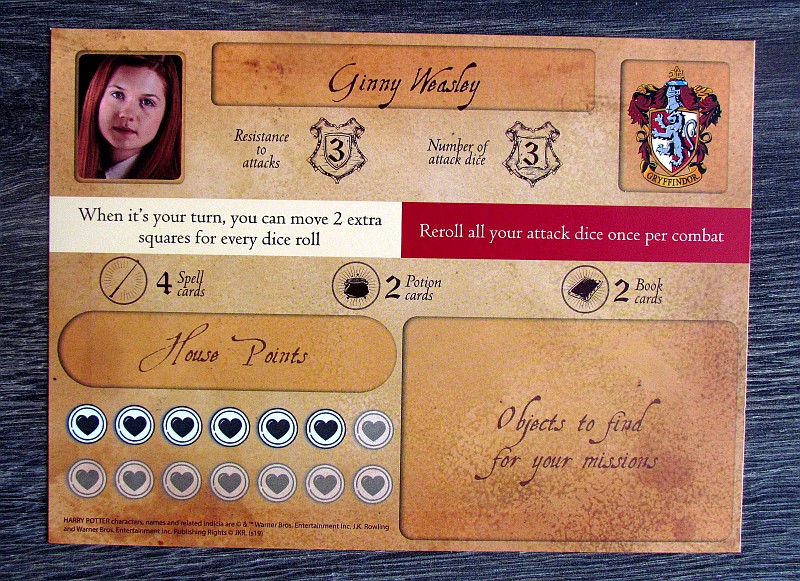 You can even run to Quidditch pitch and challenge one of your opponents to a duel in this sport. But this also means that everyone else will only watch. What effect does this have on the overall experience then we probably do not need to explain to you. It is great that the sport has its own rules even here, but you have to learn and remember it.

Fortunately, players also have very good control over whether the game should last thirty minutes or an hour or more. They just need to reasonably set a target limit of victory points. Thanks to that it is really realistic to reach the end even in the mentioned half hour. Beware, however, with higher numbers of players that exceed four. There the game gets longer and everything is much influenced by constant encounters and fighting. 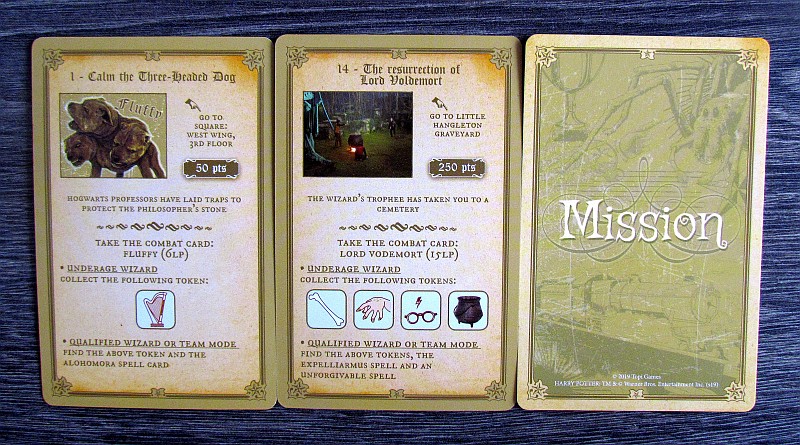 The big problem is the rules. They do not describe many parts of the game sufficiently. Thus you will not have exactly stated, how to fight the Death Eaters. And when some explanations are described in the rules, they are absurdly scattered on different pages. Whoever prepared this guide certainly did not know that the composition of the rules is the foundation of every game. Even learning A Year at Hogwarts can be frustrating. Unclear rules will spoil your first impression. 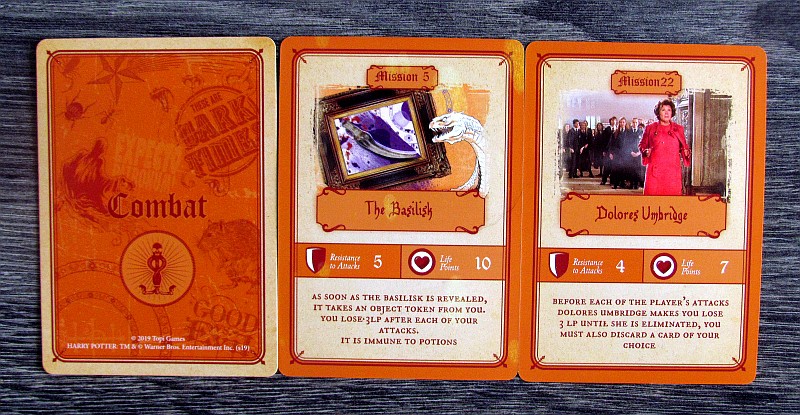 Harry Potter: A Year at Hogwarts is a board game, that wanted to be the narrator of all Hogwarts stories in one box. And it could have worked out well. But the creators took it by the wrong end and put a pair of dice in the central role of the whole experience. At the beginning it will spoil your impression, because waiting for the right number for several rounds can never be fun. All other errors could be corrected and depend heavily on the quality of rulebook. But because its like this, Harry Potter: A Year at Hogwarts is a weak game.