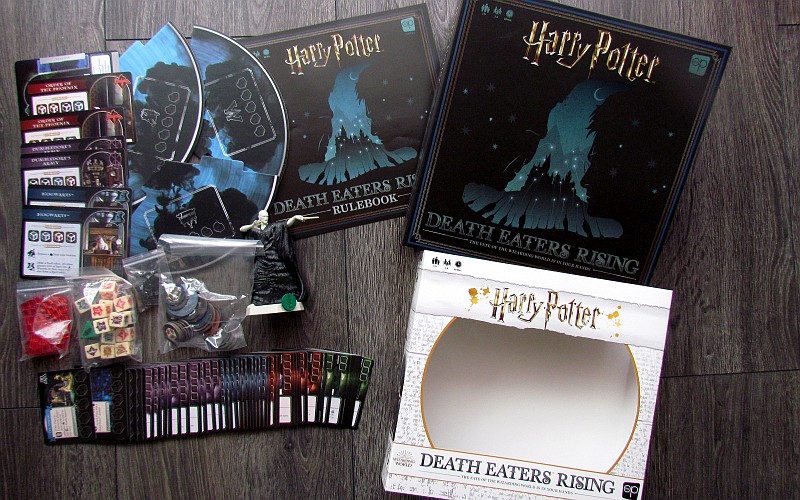 The Order of the Phoenix needs everyone who can hold a wand. Under the cloak of uncertainty, the power of Death Eaters is growing, as is their numbers. Adherents of you-know-who are slowly emerging from oblivion, and although we thought they had long since disgraced their master, their loyalty and fear goes much deeper. We must confront them on all fronts, and at the same time we will have to repel verbal attacks and accusations from our own ranks.

Players can also become members of the Order of the Phoenix, at least temporarily for the duration of the game called Harry Potter: Death Eaters Rising. We can thank USAopoly for its creation and, of course, it also had to be approved by the writer herself, her Wizarding World brand and Warner Bros. The novelty was released at the end of 2019 and entered the European market thanks to Esdevium Games. The word Rising in the title refers to a number of games from which we could already test the game Thanos Rising in the past, so we knew, what to expect.

Dark box has silhouette of a wise hat on its lid. In it, there is hope in the form of many wands facing the sky. A huge figure of Lord Voldemort awaits the player inside and the hope is immediately lost. He is placed in the middle of the table and three boards are connected around him. This will create a circular plan, three parts each belonging to one specific world location (Ministry of Magic, Hogsmeade and Knockturn Alley). The rotation of the main villain should be random and he will always face one of these three possible places. Each location is dealt its two specific cards in random order and determines the specific place, where attack of death eaters will take place. Next to the plan will remain a board for villains, dice and tokens. 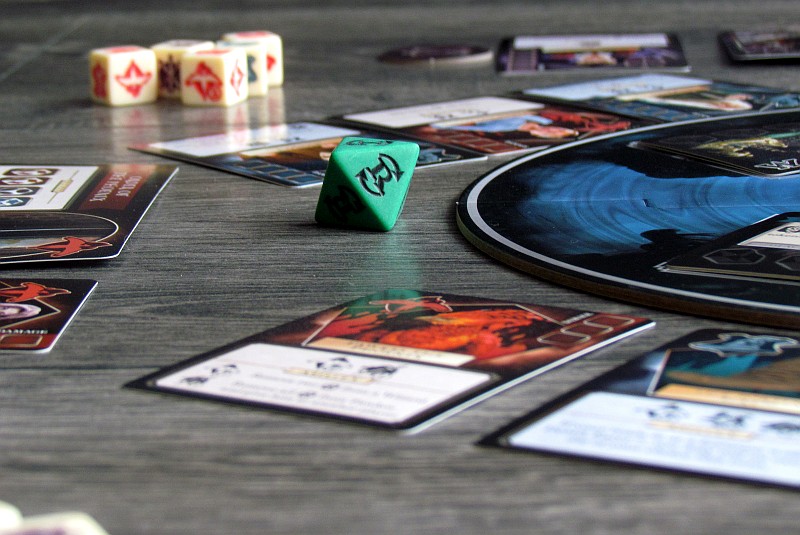 Each participant chooses, whether he wants to become a member of Dumbledore’s army, the Order of the Phoenix or would rather stay at school in Hogwarts. Depending on his choice, he gets his base card and can equip it with one of the available starting characters, such as Sirius Black or Hermione Granger. Then the players shuffle a complete set of character cards, including the evil ones. Only Voldemort does not participate in the shuffle and the players then place him in about half of the deck. Each location gets its starting set of three characters, so a total of nine magicians are revealed.

As part of his turn, the player must first choose the place, where he wants to go with his team (which so far includes only one hero). As a sign of his choice, he places an interaction token on this slice and rolls a set of his dice for that purpose. There can be a different number of them depending on the player’s characters and spells. He then tries to divide the four possible icons among cards, that lie in his chosen location and ideally cover all the spaces in a character. If it is an enemy, he gains damage and the player gains one spell token for it. In the case of an ally, such a character is added to the player’s team 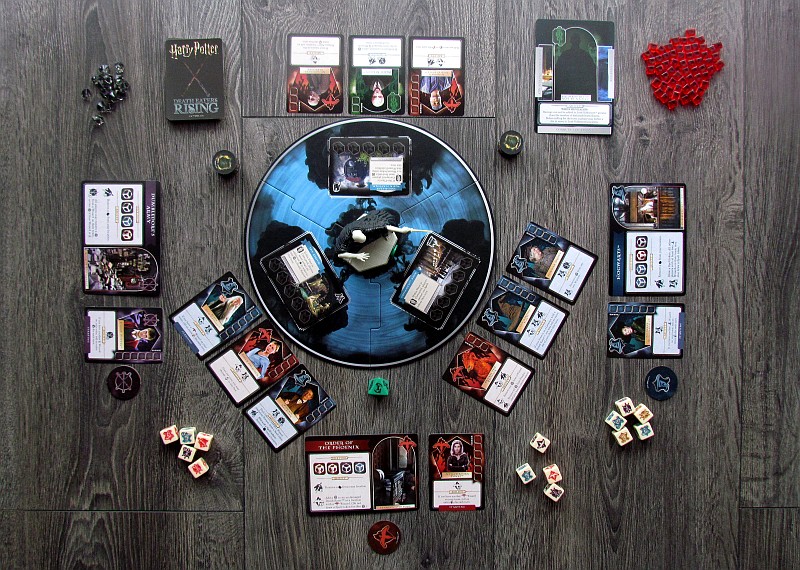 However, the player does not have to prove it at once. He must place at least one dice from each roll, while the rest can be rerolled in the hopes of a better result. However, icons can also be used to activate some abilities on team members. If he can’t place any of the icons, he loses one die, but can continue his turn and roll the rest again.

At the beginning of each round, however, evil manifests itself immediately. Players will roll a die for Voldemort, which will allow this sorcerer to turn around. And immediately afterwards, Voldemort attacks the place, where his gaze is directed. His attack will inflict damage to all characters there, including the player’s team. In addition, the abilities of the Death Eaters hiding in this place are activated. In addition, the one whose name we are not allowed to pronounce will add a corruption token. If any position receives a fifth such token, it is completely under the domination of the dark lord. 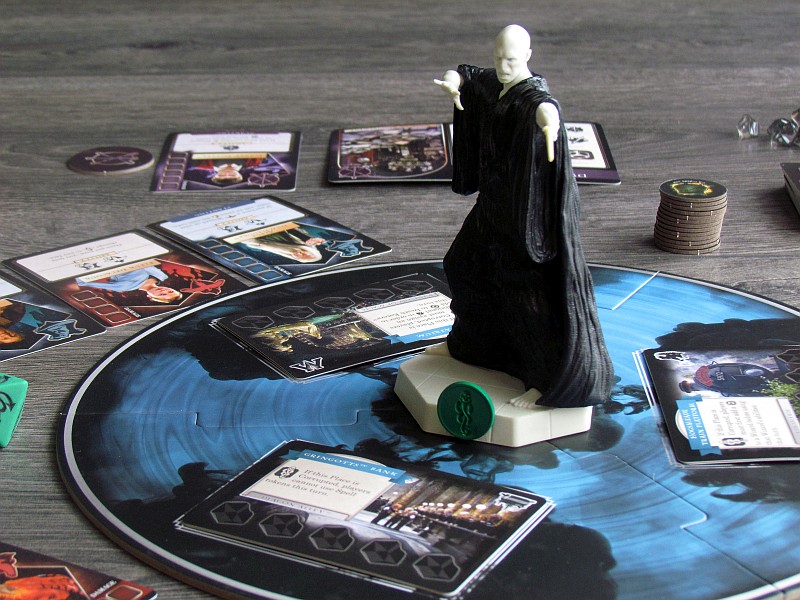 The common goal of all magicians is clear. Defeat Lord Voldemort by taking away all his life points. The character of the main villain enters the game about halfway through. In the meantime, however, the situation of the magic team may be different, because the players lose even if too many wizards have been defeated altogether. Losing also means ruining too many locations.

Harry Potter: Death Eaters Rising is a game, that uses an already tested mechanism, only wraps a magic theme and new graphics on it. But surprisingly, this course is suitable for the world of magicians and muggles, because many locations are iconic. Few people will reject the call for a duel at the Ministry of Magic or in Knockturn Alley.

The game is, of course, significantly affected by chance, which is mainly represented by dice. But this is not such a big problem here. You only need to use one die at a time, and the rest can be rerolled if needed. Thanks to this, the influence of happiness can be quite successfully minimized. But then it starts to go a little bit deeper – about how the characters appear in individual locations. Not only allies, but also enemies. And their timing is another problem, despite the fact that Lord Voldemort himself will enter the fight only in the middle of the game. 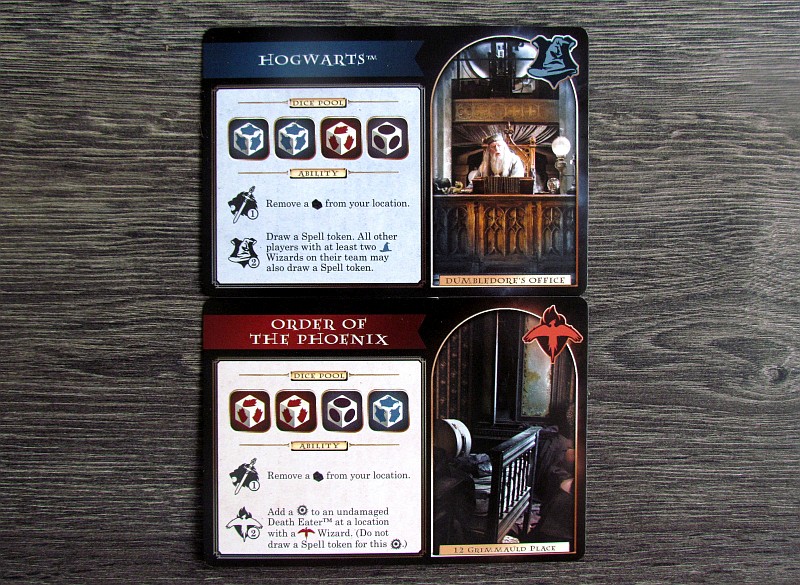 It is in the interest of all participating heroes to get quality reinforcements on their side as quickly as possible. They are therefore trying to recruit not only into Dumbledore’s army, but also fighters for the Order of the Phoenix. None of the factions of good side is limited by the fact that only one player can choose it, because otherwise it would not be possible to play in more than three participants. Speaking of these numbers, the more players in this cooperative game, the better the chances of sending your teams and dealing with enemies better.

But the center of the whole fight is just the huge character in the middle. From the beginning of the game, it gives orders to followers and deals damage to players. They often have to arrange themselves exactly, where Voldemort is looking and adapt to the activated abilities of the enemy. 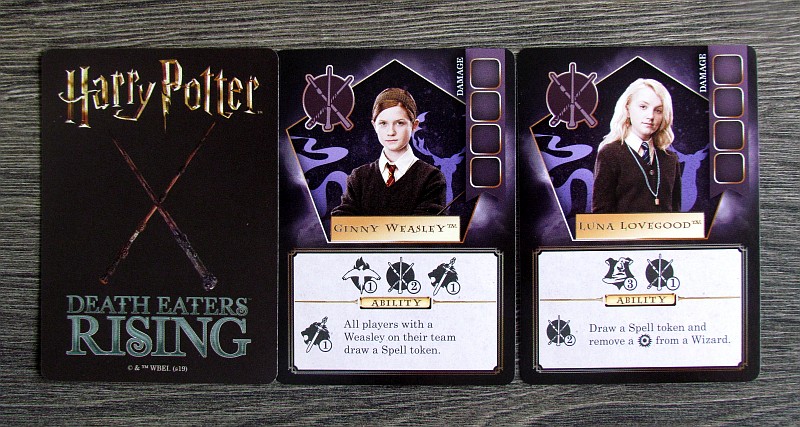 The game is surprisingly difficult. It is clear that there will be victims in every fight. Not all heroes can celebrate in the end, some will fall in battle. Players have a limit of up to twelve wizards, but the constant pitfalls mean, that you definitely have to try your best to secure your win. And this during an hour of game time, which can increase by another half an hour.

You hesitate throughout the game and have no idea when the lord of evil will appear. It’s somewhere in the middle of the package, but his exact position is a secret. This creeps into the game, which is then further encouraged by the very presence of the main villain.

The lord of evil gets the individual locations under his control step by step. It is the mechanism of destruction that is growing and the heroes have to fight it. That is an important factor in success or failure. Unlike the Thanos glove, the fight takes place here in some places and employs all players. In each move, players must try to make as many of their rolls as possible, so that the moves can be long. This is not quite for everyone. 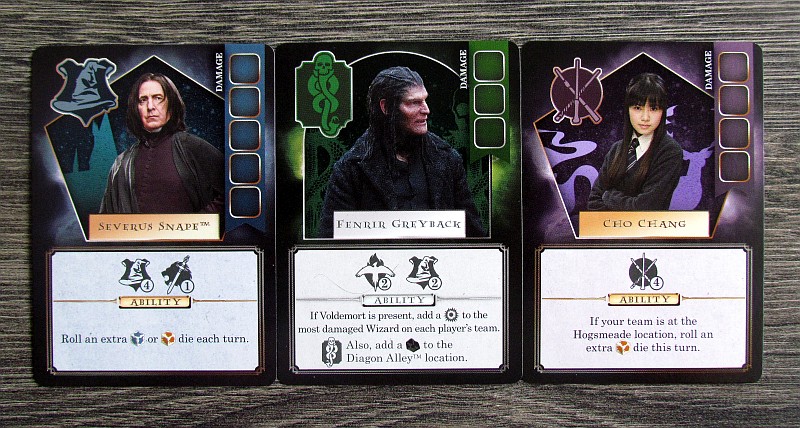 The theme is excellent and holds the atmosphere of the whole world very well. This is also helped by the card graphics, which uses photos directly from movies. The large figurine again has mainly a cosmetic function, although it increases the price of boxing, but again the game looks better with it.

Harry Potter: We have to compare Death Eaters Rising to Thanos Rising, whom we tested some time ago. Mechanisms with dice again celebrate the success of the simplicity of the principles, thanks to which the game is accessible to less experienced players. There are no complicated rules to be afraid of. Maybe it’s just our favorite theme in the end, but we feel that what’s new with Death Eaters is better than fighting for colored stones. Harry Potter: Death Eaters Rising will make you cooperative and will put a smile on your face for all fans of this world.

Harry Potter: Death Eaters Rising revolves largely around the dice. And it is from them that the basic impression of this novelty derives. This is not just one roll in one turn, but several repeated attempts to obtain suitable icons. And because of that, there is a lot of rolling, but the fight against the Death Eaters is really fun nevertheless. The game is true to its theme, exciting and difficult. Different characters and cards always enter the locations, so the games are completely different, even if the players have similar equipment in the beginning. We quite like Harry Potter: Death Eaters Rising, but it presupposes an affection for a spectacled wizard with a flash on his forehead.

by Dušan on 11. 05. 2020
I’ve always had that ability. Look at people and know what they think right away. Magicians call it reading thoughts, but I have a different name for [...]
Comments
Leave a reply