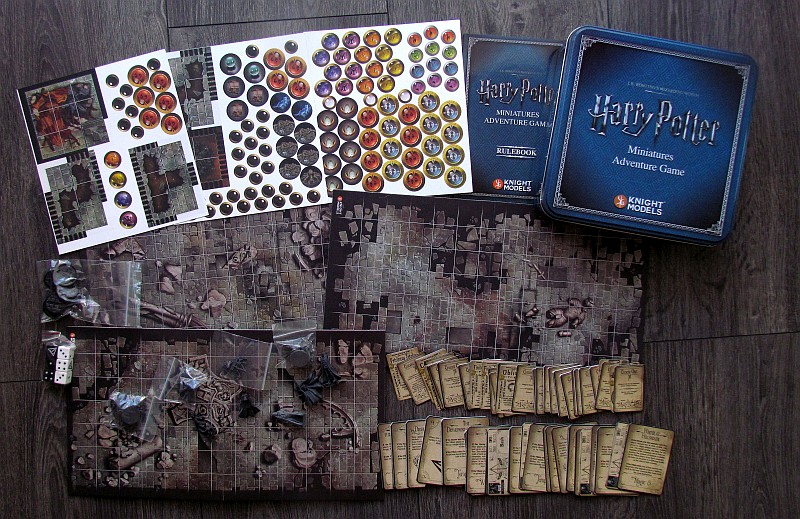 Just a few moments ago, it was an ordinary field, that my brother and I went through. But then suddenly a group of Death Eaters materialized near us. We didn’t hesitate for a moment. We drew our wands quickly, and we didn’t think for a moment, that there could be unsuspecting muggles in the area. The shootout ended as quickly as it had begun. Voldemort’s minions moved quickly away, but the first warning shots have already been made.

Maybe J. K. Rowling among those random viewers of this shootout, and created the world of Harry Potter based on it. This character has millions of fans, so it’s no wonder, that one game after another is coming to the world with this theme. And one of them is the Harry Potter Miniatures Adventure Game, prepared for players at Knight Models (next to their Batman and DC Universe Miniature Game).

The whole game is hidden in a stylish tin box, which includes three sheets with tokens, but above all double-sided folding boards. They will create an environment to fight with the help of prepared scenarios, according to which the players will create a map. Players each receive a limit of credits to build a team for their chosen side – either good or evil. However, when making a purchase, they also have to think of the cards, that must be paid. 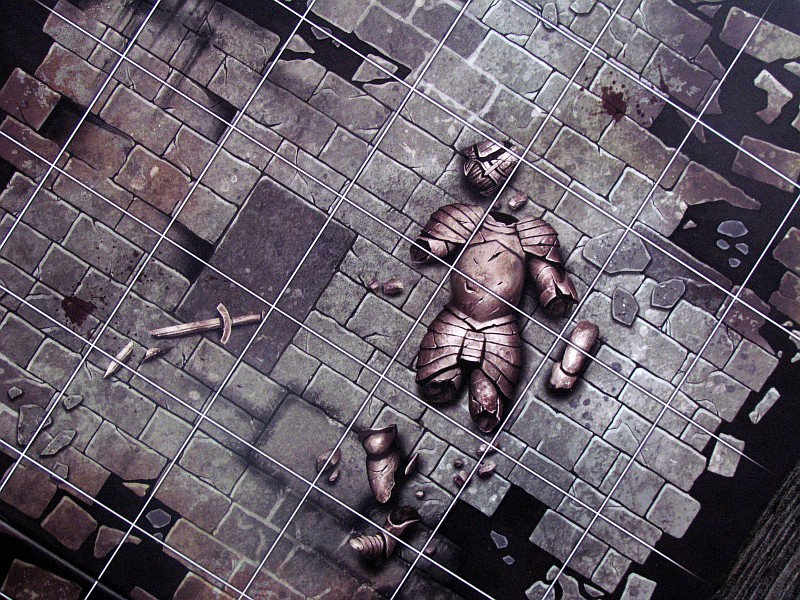 The players put their heroes on the map as instructed, and then everything breaks out. Each of the heroes in the team has a lot of qualities, but the first thing to get a go is cunning. The party with the higher sum gets the initiative and thus the first move. Before that, each side gets a set of Power Pool tokens.

The miniature can move, use an item, attack or cast magic. Movement is clearly given and common to all characters. It is limited by possible terrain, which is not exactly in the box. However, the order of activities can be chosen by the player himself and will usually try to attack. To do so, of course, they must have their aim within reach and sight. Players can also attack melee with classic weapons.

Everything uses dice and their success is improved by statistics of the characters. Each is better for something else and in turn is penalized for dice results, when it comes to a different test. Any value of three or more is always considered a success. An interesting situation, however, occurs if a six is rolled. The player counts the success and can roll this dice again and again, repating it as long as he rolls six. 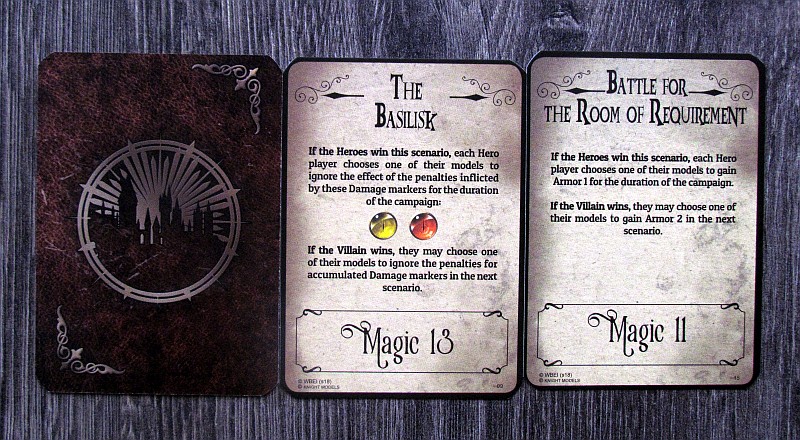 Spells, on the other hand, work a little differently. First and foremost, every spell has difficulty. This corresponds to the number of successes required to cast the spell. But it is not enough, because the attacked side can defend itself against both types of attacks. Either defensive roll or counter-spell. The adversary is never completely defenseless and it is necessary to think about it.

The way of marking injuries works very simplistic. Regardless of the number of points, whenever hero hit his rival, the damage counts as one, and as a sign, the player puts a health token on his character. It comes with four colors with deteriorating health, which has an impact on the player’s options.

Spells can be maintained across rounds, such as some curses. At the beginning of a turn, however, there is always some price of magic power to pay to keep it. Most spells, however, can not be used in every consecutive turn, but have a so-called cooling effect. After use, the cards are marked with a token, which gradually turns as the spell slowly becomes active again. 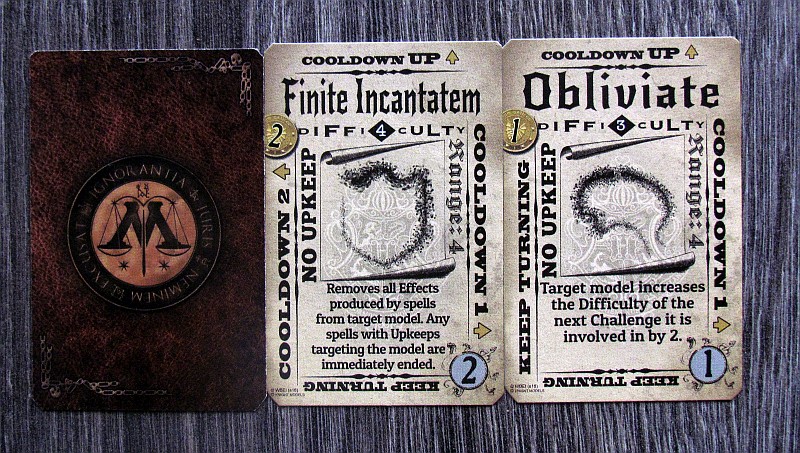 Both teams usually try to accomplish some of the tasks assigned to them by the scenario. Often enough heroes must be present at a certain location to fulfill it. As soon as the prescribed end of the game comes, the party with the highest number of victory points wins just from performing these tasks.

Unfortunately at the outset of the Harry Potter Miniature Adventure Game review, we have to ask: Where is the adventure, that the title promises? The game is purely about fighting. Even scenario always has very similar tasks, that does not help here. This promises should be kept by story expansions, but we had no opportunity to try. So we will not infer any opinions about this part of the game.

We can only evaluate, what we played and that is the basic set. This is quite disappointing in view of the extremely high price tag. The game itself is quite entertaining with the right approach, but the expectations of this world and such big games with lots of expansions are always big. And the game can’t keep up with them. 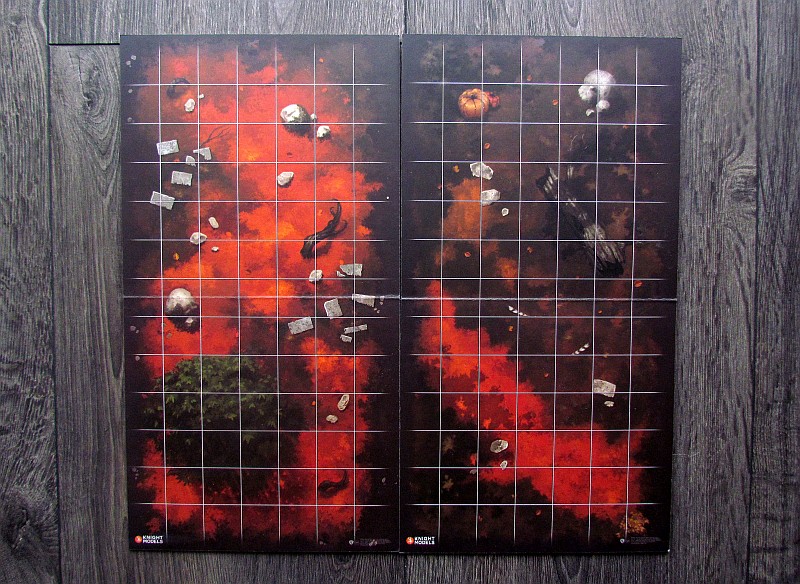 The game seemingly contains everything. Team preparation, struggle and tension from the use of abilities. And a pretty solid number of scenarios. But it is not enough, because everything is spoiled seemingly small changes. For example, movement is set at three for all, which does not seem very plausible.

As a result of the cooldown effect of the spells (cooldown), the situation often occurs, that the miniatures are facing each other and cannot fight. Instead, they just wait a round or two, until they can attack again. This does not seem too thematic and certainly does not give the impression, that the characters spew one after another as in movies.

The game has an expansion in the form of several figures. They add variability in team building and improve the impression of tactics. But it can not stand out, if players do not have the chance to use more positional game. This is because most of the fighting takes place in an open area with only a minimum of terrain. The miniatrues thus have a collectable reason for existence in the first place and, of course, also emotional for every Harry Potter fan. 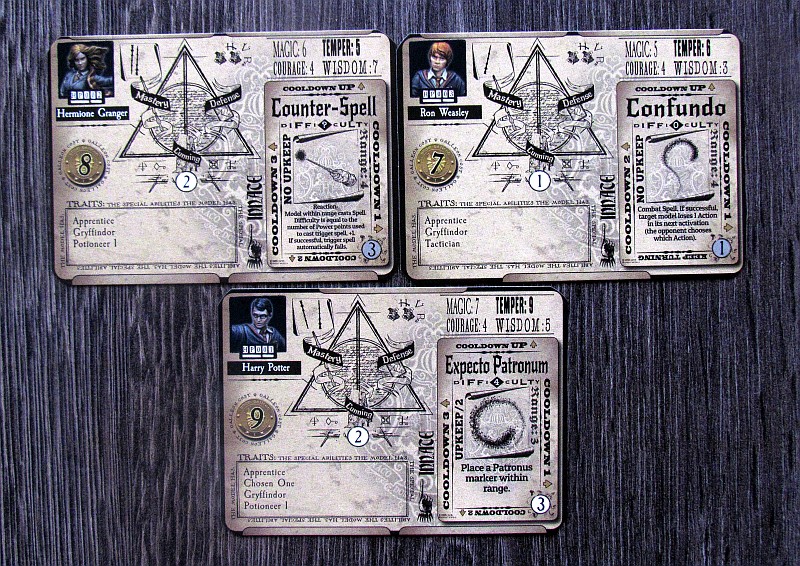 However, the characters differ much more clearly from each other. They have not only different statistics, but also are skilled more or less in magic, have different number of items and magic slots, and above all they can have their special skills. Here you can see the potential, that the game could theoretically have.

There is no doubt, that the processing of miniatures is absolutely gorgeous. But it is only when you can assemble, cut and color them. The pieces do not fit together very precisely, so a lot of ant work awaits and the right connection of the pieces requires a lot of time. This is also the reason, why we decided to publish only photos of parts as they arrive, instead of publishing our finished work. You can find that elsewhere, from more craftful people. 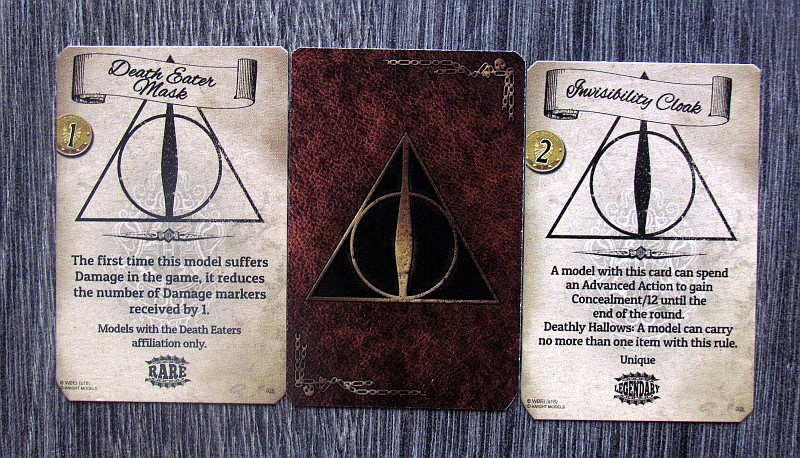 But that’s not all, because once you look at the tokens, you’ll probably be very upset. Individual tokens are in the form of hard paper and therefore have no cardboard form. This makes them very difficult to handle and pick up. Cards have beautiful graphics, but it comes at the expense of clarity and especially text, which must then be printed in extremely small letters. And then there is a price, that is definitely not appropriate to the content.

Harry Potter Miniatures Adventure Game is a hopeful game, if you are a magician fan with lightning on his forehead. It will take you to this world with incredibly detailed and faithful models of individual heroes. The game is quite simplified (although the rules come in the thick manual) and some of the options are quite contradictory. But if there were more ways to use the terrain, and be not just a spell shootout, the Harry Potter MIniatures Adventure Game could be a pretty solid game. 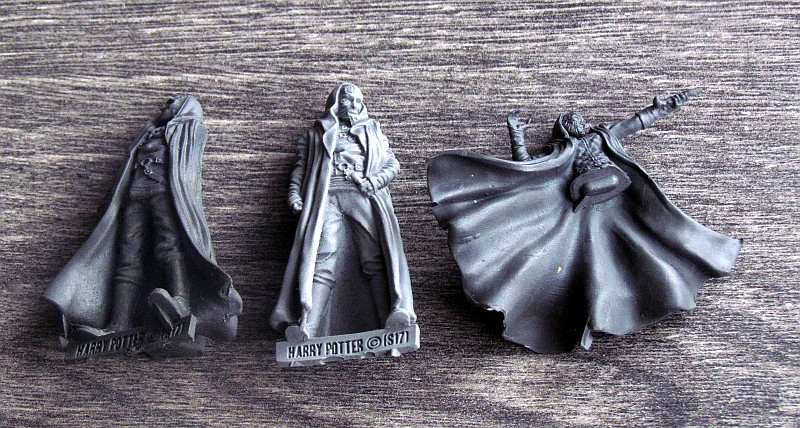 Note: Miniatures are pictured in an uncompleted, unpainted state, so the pictures represent the true visuals and not our glueing and painting skills.

Harry Potter Miniatures Adventure Game did not fulfill, what it has promised. It does not offer any significant adventure, but instead sets up two groups of heroes without any deeper possibilities. The spell is great and brings fans a lot of fun, as well as graphics and card details. But unfortunately, the game itself as a whole loses in some elements of the gameplay. If there was possibility to fix our complaints, we would like to play the Harry Potter Miniatures Game again.

by Dušan on 27. 01. 2020
Harry Potter’s world is full of mysterious creatures. This is what Newt Scamander convinced us of, but we knew it already before that. Just think of [...]

by Dušan on 17. 01. 2020
In the vortex of time, it is not easy to order your thoughts. Days, months, and years fly all around the head, then how do I concentrate? The professor [...]
comments
Leave a reply