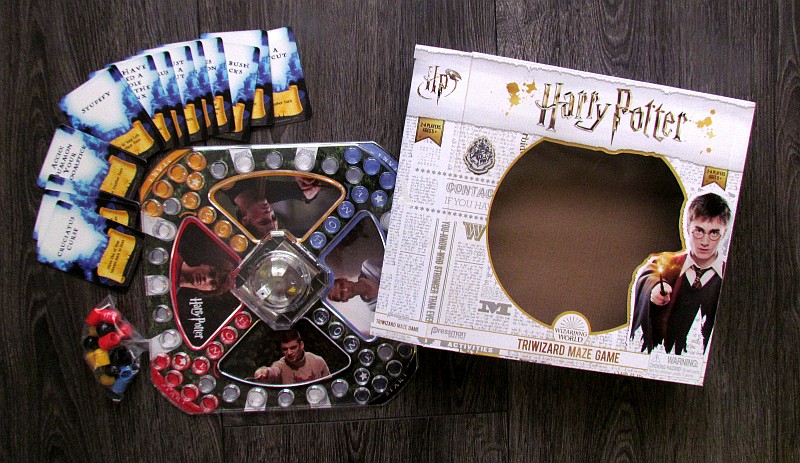 You’ve been wondering, how young wizards and witches spend all their free time at the school of witchcraft and magic. You certainly do not believe, that they will study and read the textbooks all the time. Believe it or not, they play the magic Ludo.

There have been a number of board games on the market with the theme of Harry Potter and his world. While we played a miniature game few days ago, this time we have a Three Wizard Tournament. The game in its original English version is called the Harry Potter Triwizard Maze Game, which is just a reworking of the magical Ludo. The game was created by Pressman licensed Wizarding World. Esdevium Games handles distribution in Europe.

At first glance, the white box is intriguing by its various symbols and inscriptions from the films, but above all it shows the portrait of the main character. Through the transparent window, players can also peek inside. It is better to open the box immediately and pull out the plastic board. A path trodden through the transparent holes winds around him. 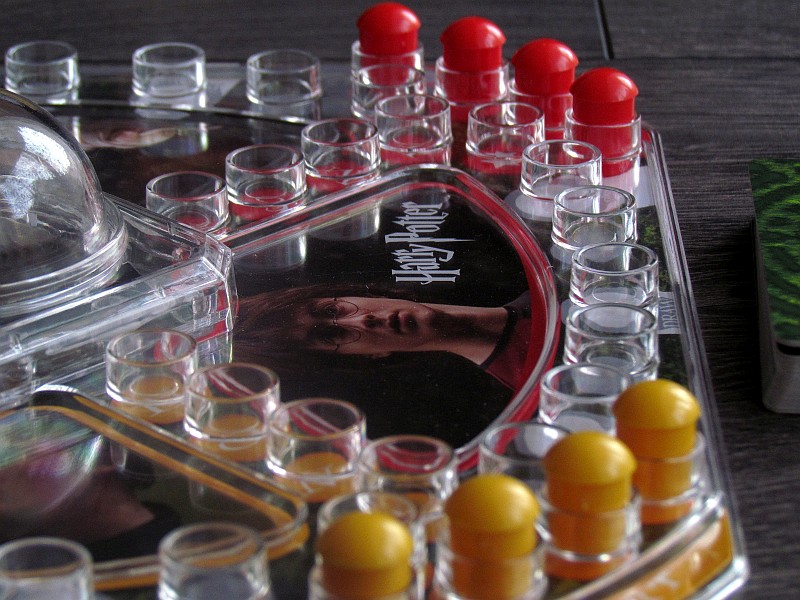 Each player chooses his side, color and gets a set of four figures. He places them in a slight arch in his starting corner. In addition, the deck of cards must be shuffled. Then everything is ready, because the die is found in the middle of the plan.

All participants take turns. As soon as the player is active, he squeezes the dome in the middle, by doing it bends the bottom of the dome, forcing the dice to jump (dice snap). Once he learns its value, he can move one of his pieces forward. To start going forward, he needs to have at least one active figure. To set in on track, he needs to roll a six. So the first rounds are mainly in the spirit of everyone trying to succeed and have the first character to sprint around the whole plan to the finish line. This is the Triwizard Cup standing in the middle.

Each player has four pieces, which he may freely choose from. If the piece ends up moving on the opponent’s position, the target figure returns to the starting field. Much more interesting things happen, when pawn stops on one of the ten white-framed places with the word DRAW. This location prescribes players to draw one card from the common deck and follow its instructions immediately. 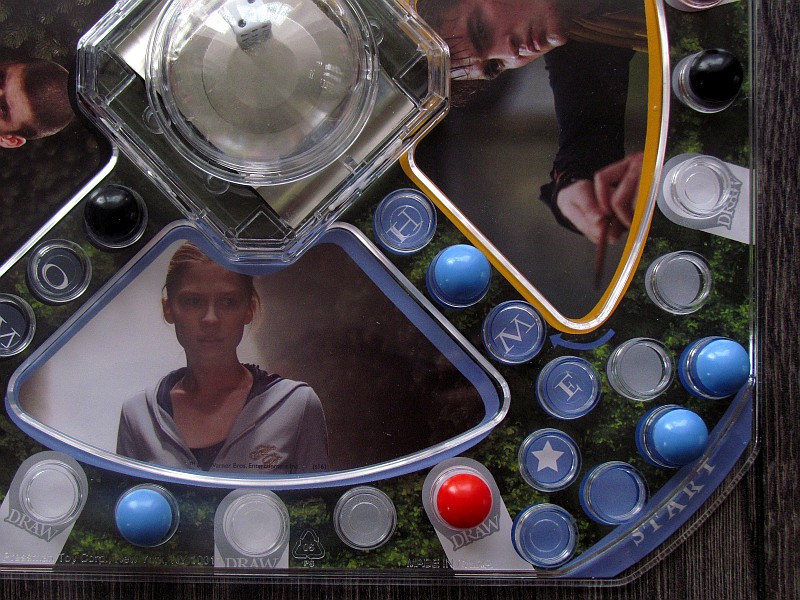 Cards can have both positive and negative effects. Most of the time, they mean moving forward or backward, it depends on luck. In the end, the players try to arrive in front of their four target squares and occupy them all. Whoever succeeds first becomes the winner.

From the description, it is clear that the Harry Potter Triwizard Maze Game is a classic game of Ludo. Its course is complemented by magic props, ie cards that interfere with the game together with the dice. But they are just another element of chance, because players immediately evaluate them and have no way of influencing their turns or plan in advance. 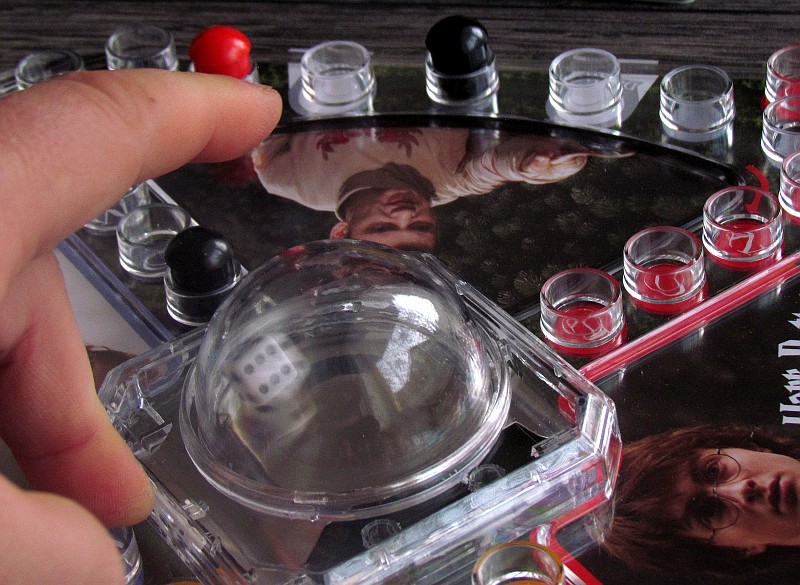 As in Ludo, players can only choose a piece to move with. At six, they deploy, but above all span the die again. There is no influence of tactics. The effects of the cards are expected and simply move the figures forward or backwards. There are also extremely powerful effects, that move the deployed enemy figure straight up in front of his house.

The more players, the more crowded the plan is and the fun is more fun. It is a bit boring in two, but you can always be sure that the game is fast and you do not have to wait long for the winner to be determined. 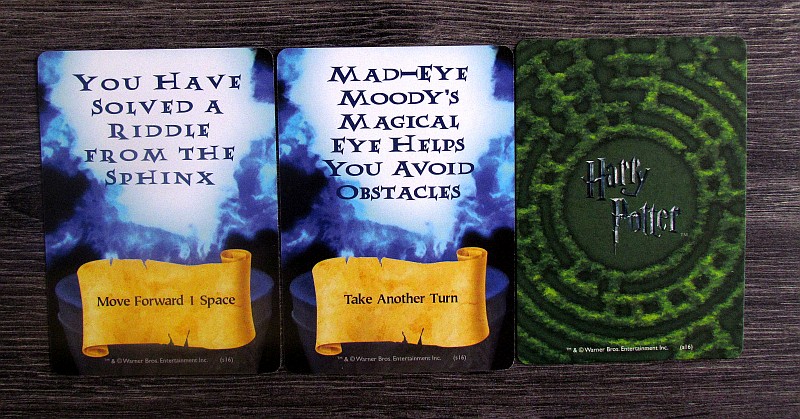 The game is therefore suitable for children, but does not bring anything extremely new. The only weapon should be a theme, an illustration under a transparent board, and then of course a dome with a cube. Because even the figures hold their positions very well, the game is great on the go. Children will love it thanks to famous heroes and you will not have to constantly search for components in the car. Only cards deviate from this concept.

The Harry Potter Triwizard Game is a hidden Ludo game with cards added. But the main attraction is the magicians, the cube in the middle and the emphasis on playing on the go. The Harry Potter Triwizard Game will find its way into families with younger children, unless you already have lots of other variations on one of the children’s favorite games.

Harry Potter Triwizard Game looks promising. In addition to just running around with figures as the dice whistles, you could have some control using cards. Unfortunately, they remain with simple instructions, that do not change the overall impression of basic Ludo. Harry Potter Triwizard Game will entertain the same audience as the classic Ludo, if someone wants another version of the classic. It has a chance to get some players, thanks to the theme and emphasis on travel processing.

by Dušan on 06. 04. 2020
The huge pot in the courtyard is a legend in our school. Its origins are enshrouded in mystery, but we were told during our freshmen year, that its a [...]
comments
Leave a reply