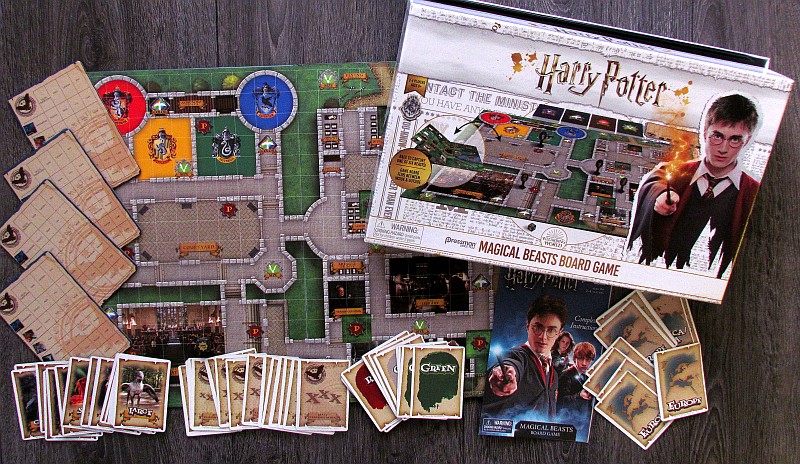 Harry Potter’s world is full of mysterious creatures. This is what Newt Scamander convinced us of, but we knew it already before that. Just think of the spectacled wizard encounters, be it dragons, house elves, hipogryphs, thestrals or giant acromantulas. Some are friendly, others not so, but all are connected by their consistent relationship with magic.

Harry Potter, a magician’s apprentice, will be featured in the Harry Potter Magical Beasts Board Game prepared for us by Pressman publishing company. Of course, the game was released under license from J. K. Rowling and Warner Bros. The game is heading to the European market thanks to Esdevium Games.

The title hero is waving at us with his want from the box, but main interesting part of your encounter is the size of the box, which is surprisingly large. On the lid, however, we already see a hint of the game environment, that awaits us inside. Players put a game board on the table with one more cardboard page in the middle. By flipping it, players move from Hogwarts rooms to surroundings of the castle and back. The players themselves decide, whether to start their monster hunt outside or inside. 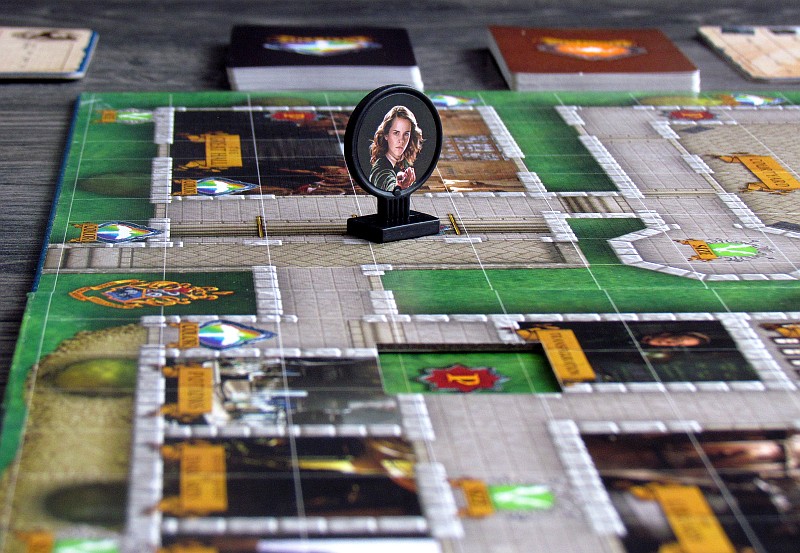 Each player chooses his plastic stand (with sticker portrait of the main characters) and places it at the entry point of the map. Next to the plan, there will be four decks of clue cards – color, location, classification, and creature size.

Players move around the map using a hexagonal die. As long as the number is rolled, the heroes simply run around the current environment and try to collect the right hints to find and identify a magical creature. To do this, they need a set of all four cards, that relate to this monster, as prescribed by the diagram, that everyone gets at the beginning.

However, this run is only valid until the P symbol is rolled, which means the passage. All heroes are expelled from the castle or must return inside, based on their current position. But their position on the plan will be an important information here, because only from some places can characters move freely between those two locations. Such positions are marked with the letter P and their position corresponds to windon in the flipping part of the board. This means that the hero standing there does not have to worry about anything. 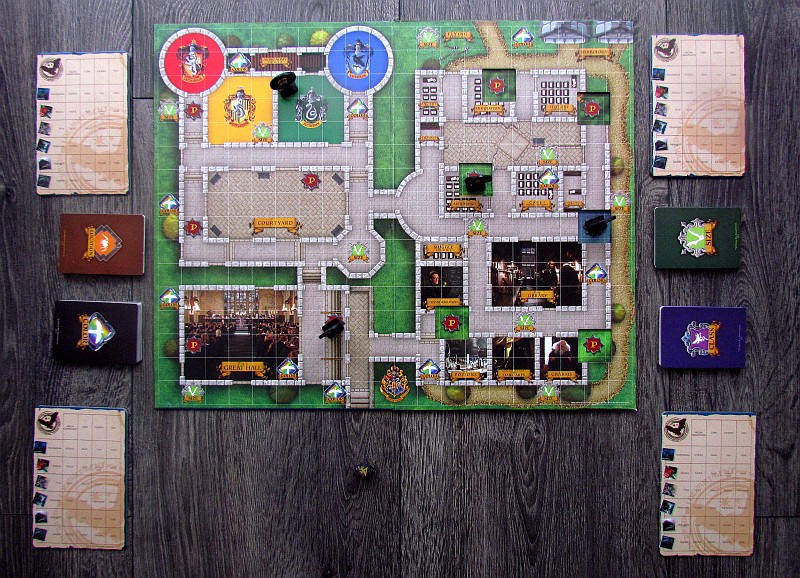 But most positions are not safe. And any character, that doesn’t pass through the passage window, is removed from the board for a moment. Only then can the location change. The active player (the one who rolled P) now has the chance to place the opponents’ pieces anywhere on the new side of the board. In addition, he may steal one clue card from one of these failed rivals.

When players collect clue cards, they sort them by type and stack it on top of each other. Players can be lost only due to theft, but that stands only for the upper card, while the lower ones are protected. All the time, all opponents try to be the first to accumulate a set of four clue cards needed to find one of the mysterious creatures. Whoever succeeds first and holds the prescribed set immediately becomes the winner. 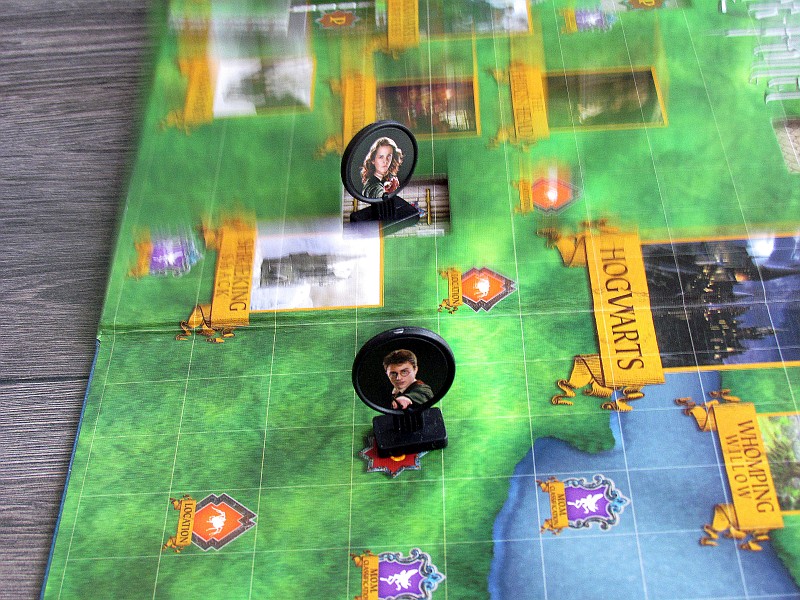 Harry Potter Magical Beasts Board Game is a dice game. An entirely random one, but players have surprisingly some moments under control. It is only a matter of whether they are willing to take the risk and remain in a position without passage or not. Sometimes the dice won’t allow anything else, but at other times, players are simply greedy and remain in a more convenient place, hoping that rivals do not roll a P on the die.

But that decision can backfire. It is the coincidence and one of the six walls of the cube that decides on the flipping of the plan. It can happen at any time. The change affects mainly players and their pieces, because clues can be collected on both sides more or less in the same way. To do this, there are some locations that need to be reached with the cube.

The game is really fast thanks to its simplicity, because whether you wish it or not, you simply get to the cards you need. Therefore, you can count on the time of some thirty minutes before you can catch one of the six possible creatures. 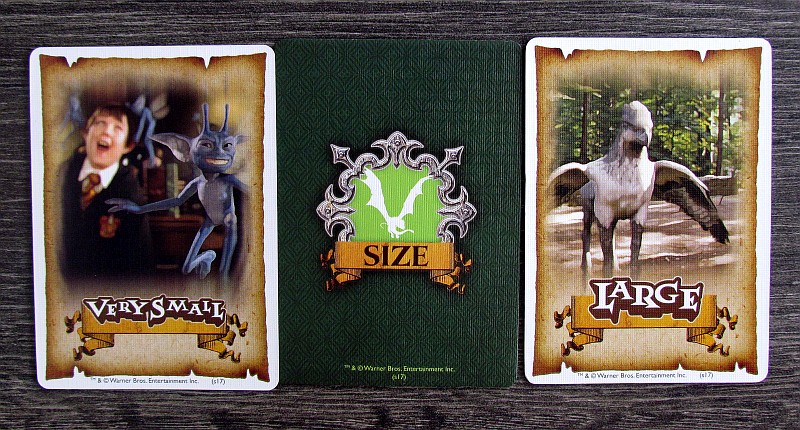 And here the impact of chance is really great. If somebody is going to roll only low numbers, then he won’t get anywhere and can only look sadly as opponents collect the necessary cards. There’s another second way to get the card tracks and do a theft.

What is interesting is the possibility of being gleeful, if you are the one who rolled the letter side. You can put your opponent anywhere, and since all the information is public, you can easily place him far away from his apparent goal.

Graphics are not very rich. There are a few pictures, but they are rather uninteresting. Generally, the game doesn’t look very much like Harry Potter except the map itself. The processing is as average as possible and is definitely disappointing. Some cards even have bad (missplaced) print. 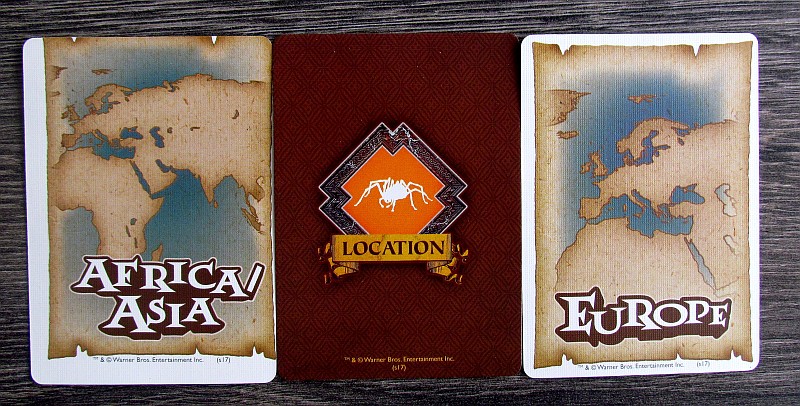 Harry Potter Magical Beasts Board Game is a random game, in which players will race not only among themselves, but also with the dice itself. It can largely help and hold you at the right time. Or completely trip your legs. If you are looking for a game from the Harry Potter world, look at other products. But if you want something really simple, just a little more challenging than Ludo, then maybe you could find a liking in this game.

Review: Orléans Stories – from the diary of the kingdom

by Dušan on 03. 04. 2020
To care for the well-being of all citizens. That’s exactly my profession. Every day is completely different. Sometimes a blacksmith needs help with a [...]

Review: The Aquicorn Cove – saving the day.. and bay

by Dušan on 27. 03. 2020
When I was little, I loved every minute I spent in the bay. I swam through the calm water and playful aquicorns danced around. It was like we belonged [...]

by Dušan on 07. 02. 2020
Robots surround us from all sides. But they rarely manage without our help. They are waiting for instructions to help them accomplish their task. Correct [...]
Comments
Leave a reply