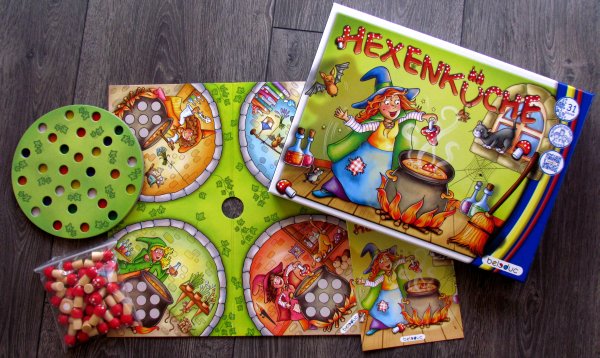 What do you think are main ingredients for brewing magical cocktails for a witch? Do you think of frog legs, bat blood, mouse tail or spider legs? But this is all totally wrong! The main and essential ingredient of any decent potion is a pile of toadstools. Dry them, squeeze them or boil them. Everything is possible and every kind is used for other spells. But not every witch has enough of them.

One such kitchen is pretty close in the board game Hexenküche from German company Beleduc. Kitchen was born in this company in 2013 and from head and brush of designer Nadine Bougie. But the game dates back to 1995, when it was published for the first time in version called Witches Kitchen.

And there certainly is nothing to criticize, when it comes to processing. It is quite precise from a very sturdy box with picture of red witch down to content lying inside. There is a big square board, that has a hole drilled in the middle. We will not get into it to hide, but it is a position, where carousel with tons of color and empty round holes fits the best. This rotating piece is massive and glued out of four layers of carton. 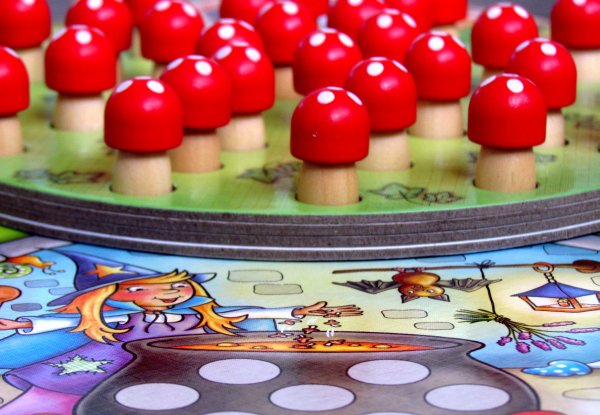 But we will need one more thing to do all the spelling – a pile of 28 wooden toadstools, whose legs miraculously fit into the round holes in round plate. Mushrooms are all same as one and only one six-sided dice with colors makes them company in a plastic bag. Board itself shows four kitchens in its corners, together with witches attending fight for title of best cook. Each has its own animal helper and waits also for help from one of the players.

And at the beginning, this is what happens. Players each select one of witches and sit next to her kitchen. Board is equipped with said carousel and then jointly all children push toadstools into their holes. When doing that, they can try to remember position of the individual colors under their roots, but it will not be easy.

Fortunately, it will improve significantly as the game progresses. Starting player gets dice, rolls it and his task is to find a fungus growing on same colored spot. As it happens with memory games, initially everything is more luck-based and later on, players can go for sure, when they go for colors already revealed. Such poorly chosen toadstool is always returned and search can continue. All this will be happening over and over, until one of player does not gather seven red mushrooms into his cauldron. 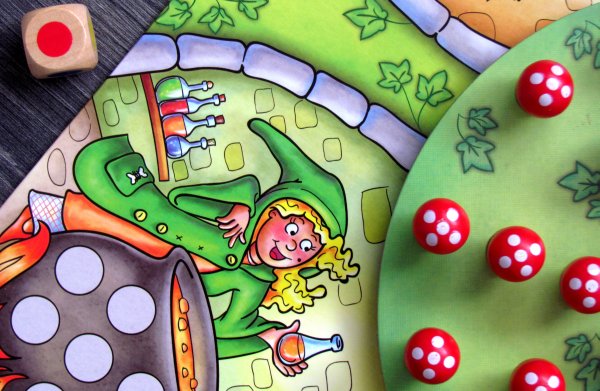 Witches Kitchen is new addition to popular children card games. Main purpose and goal is to train memory. And mushrooms will be certainly very good at this, as the round shape with all of them growing looks a whole lot alike, so it is not easy to keep track of color locations.

As we already have pointed out, luck plays an important role in here. Felicity is necessary and can still decide winner, although others have chance to catch up later. But such game of random elements simply belongs in childrens game, so this time, it is definitely not seen as a negative.

Fortunately, even the most demanding players with better memory can enjoy Hexenküche. Rules include also a hardcore variant, that adds next level of uncertainty. It’s easy to lose track of the position of the color, when every turn makes carousel rotates a half turn in either direction. Mushrooms are constantly changing positions and game is suddenly even bigger burden for your imagination. 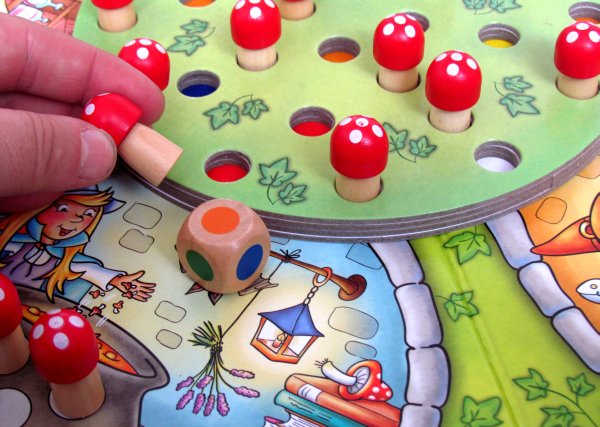 We praised processing already. Yet it would be wrong not to emphasize it once more, that fungi are made of wood and cardboard components are really firm. Rules are clearly written and nobody will have any problem, to learn to play this game. Quality of component is corresponding recommendations for youngest player from four years up and we can only support this.

Witches Kitchen does not train only memory. It is just the most exposed element. When we take age recommendation into account, there are also colors, that tiny tots learn better to discern. This makes the Witches Kitchen hilarious and high-quality children game, that will delight all those, who like to remember (or forget?) something.

Review: Mystery of the Abbey – monks have secrets

by Dušan on 19. 10. 2016
When it comes to investigating crime, everybody is innocent. As if suspicion was an atonement. And only the best detectives reveal the hypocrisy!
Comments
Leave a reply