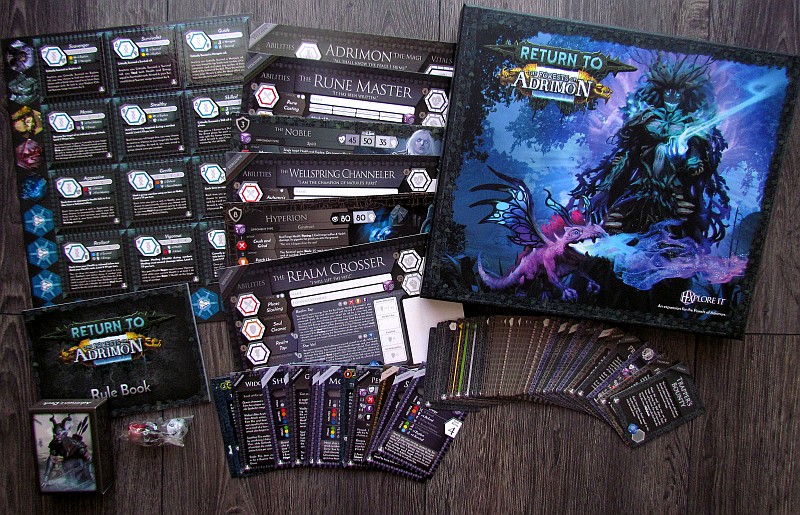 Why on earth should I go back? I barely escaped from the clutches of death. I pulled myself out of the cob web and wandered through the trees at night forevere. When I saw the light, I started screaming. Out of fear. I thought it was her. That she’s coming for me. Fortunately, it was just a patrol, that led me to safety. But as soon as I got well, a new hero asks for me. He says he needs a guide to find her lair.

The new box does not hide its affiliation to the world of HEXplore It and specifically serves as an extension of the second edition. This is clear from the title, that reads Return to the Forests of Adrimon. We will really return to the forest environment. We are encouraged by the authors Kat Kimoundri, Nathan Loos and Jonathan Mariucci, although they are not clearly named in the rules. However, the game was clearly released in 2019 under the logo of Mariucci J. Designs LLC and from the Kickstarter campaign, it is also heading to Europe thanks to Esdevium Games. 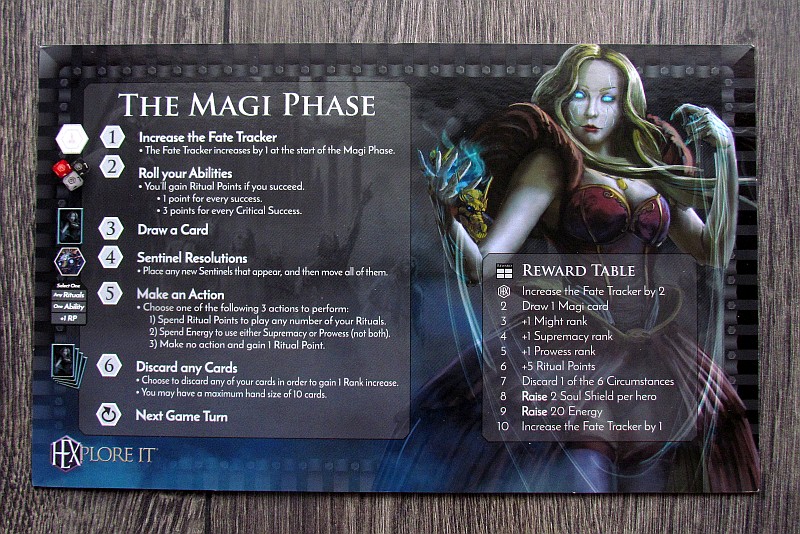 Let’s recall briefly, how to play HEXplore It. It all starts outside the classic round process by creating a unique hero. It always arises as a combination of race and profession. This creates numerical statistics, which then play an important role from the start, but can always be improved. The team moves as one man on the map in several ways. It is the speed of movement, that determines the next events. The group can stray or calmly move forward, looking out for anything waiting for them. Players already know in advance, what they can expect in the next stage, but the dice roll determines the circumstance, that is activated. Whenever there is a fight, it is done without dice, players record the lives of monsters on a special board. The heroes become increasingly stronger as a result of the task, the rewards, the improvements, and the items, until they finally take the courage and confront the main villain.

There is no map in a box with dryad portrait on the lid. The nature of the extension is therefore mainly with regard to variability. In general, the authors put great emphasis on it, so we were very curious about what the box will bring. So we quickly started looking under the big cards with monsters and heroes. 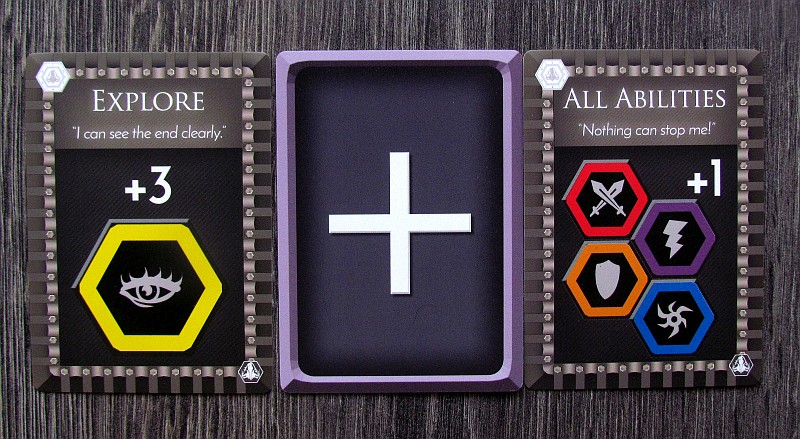 As a result, we have easily overlooked one important change. The heroes here are significantly stronger, because they belong to two types at once, as indicated by the colors in the upper left corner. And players will need strength, as there are several really delicate opponents and one weaker. Of course, this is mainly about variability.

Heroes again offer interesting occupations, but no less tempting are the new races, be it the moon elf or the forest guard. Players can even become dragons, and few people can resist the attraction. It is also necessary to mention the enrichment of relic cards, fragments and others. But this time it is only increasing the variability of the basic box. 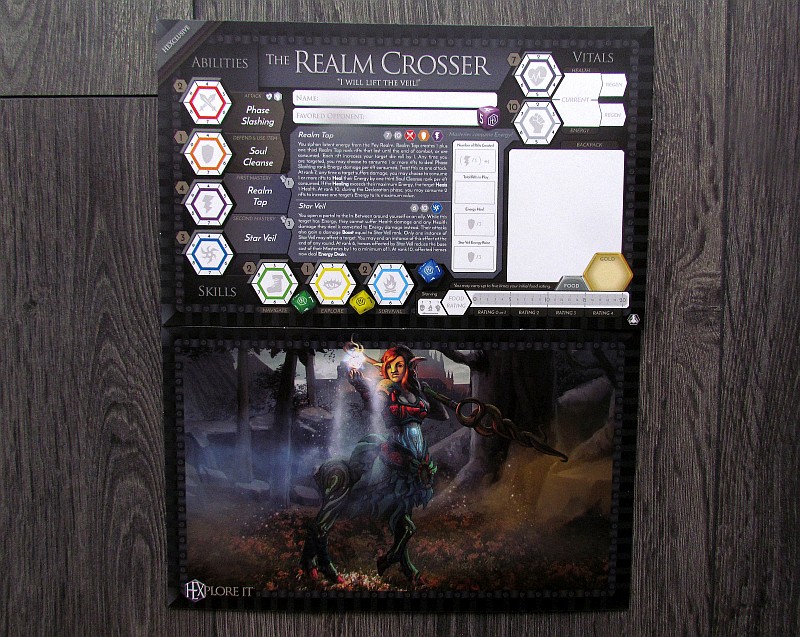 New items will also be important. This time its all about being legendary. These can be obtained by defeating some of the enemies, and in one case, it is not an item, but an ally, who will take part in the action with the hero team. Additional benefits can be obtained at designated points of the map, but this time they are only described in the rules. It is a pity, that the authors did not print them on a separate board, as they did in the previous box.

But then it starts to get tough. A big novelty is traits on separate small cards. Their acquisition and improvement depends purely on the fulfillment of the condition of the given ability. However, it is not enough to do it once, but several times, for players to receive that trait. All this can of course be marked on this small square card with an eraser. 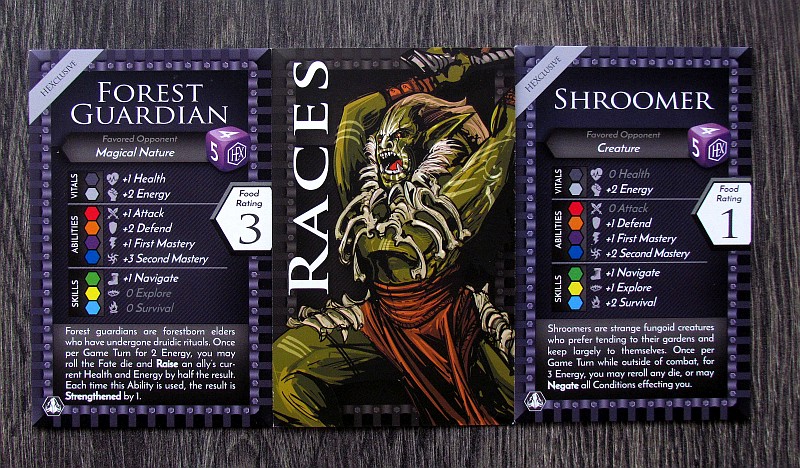 The most important and last novelty is a rule variant. This allows one of the participants to take on the role of the witch. For this role are prepared completely new rules and board with her own capabilities and parameters. Magi gets a set of three dice and will have her own turn process, including sentinel movement.

You can now see, that this expansion is simply a delicacy with all the trimmings. So if you want to diversify the HEXplore It experience from time to time with a little rivalry, then this option is right for you. And it works great, just learning the rules in the role of Magi is a bit more challenging. It takes up a number of pages. But it is worth it, because suddenly the adventures of heroes are again different. Even Magi is in the game growing and improving his skills as well as heroes. 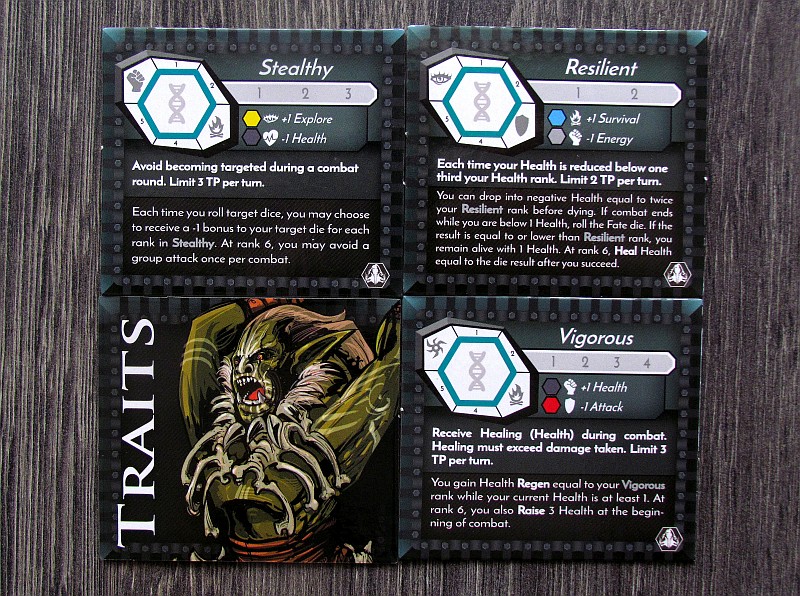 Return to the Forests of Adrimon is a great, albeit relatively small, expansion. It should be purchased primarily by players, who consider the cooperative version is not enough. Generally, part of the components should not be combined with older boxes, although most of them again increase variability. Fortunately, everything has its purpose. Return to the Forests of Adrimon is another addition that makes a great game even better.

- missing board for new locations and their rewards

Return to the Forests of Adrimon is an expansion of the game HEXplore It, which certainly does not do it any disgrace. Extension of already known decks is on the sideline. At the center of the box is a new boss, whose skin can even be worn by one of the players, thanks to a special variant. This makes the game no longer cooperative, but all experiences remain. We really like the constant expansion of opportunities to improve the hero. This time with traits, that also have several levels. Return to the Forests of Adrimon is a box filled with ideas.