Review: Hexplore It – The Valley of the Dead King

by Dušan on 10. 10. 2019
0
Doporučení recenzenta
previous article
Review: Men at Work - adventurous life on the construction site
next article
Review: The Towers of Arkhanos – dice are pillars for houses 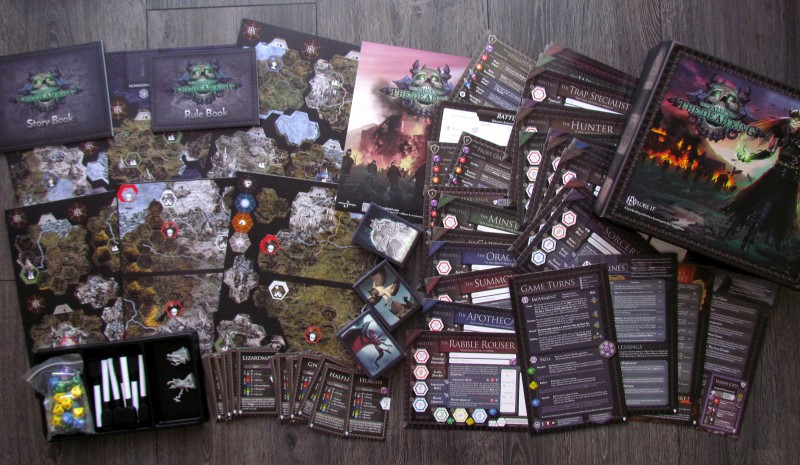 Before he came, everything had clear rules. Who was alive lived and who was dead was dead. But these clear principles suddenly stumbled and cracked. At first, we didn’t know, why a duck for lunch couldn’t die. Death has left our country and was replaced. A dead king, who commands the crowds of all, who should be on the other side.

Hexplore It: The Valley of the Dead King presents itself with a unique subtitle “hero building adventure game”. When we started discovering it, we had a fresh experience of Call to Adventure, so we had an idea of what a hero building might look like. This news was prepared by Mariucci J. Designs. The creators are Kat Kimoundri, Nathan Loos and Jonathan Mariucci. Illustration by Yanis Cardin. The game was released in 2017 and also flew through the campaign on Kickstarter, where it received the support of 1,500 fans. The game is now distributed in Europe by Esdevium Games.

On the lid of a heavy box, we see burning houses and in the foreground is a figure of a terrible Dead King. Inside, players discover a series of boards, that can be covered with erasable markers. This is already a moment, when everyone can create their own hero as a combination of role and race. This combination is what makes each character unique in the game. Roles range from offensive, defensive and healing to specialized. Race then corresponds to one of the world’s inhabitants. These are classic fantasy nations such as dwarfs, trolls or elves, but many more! 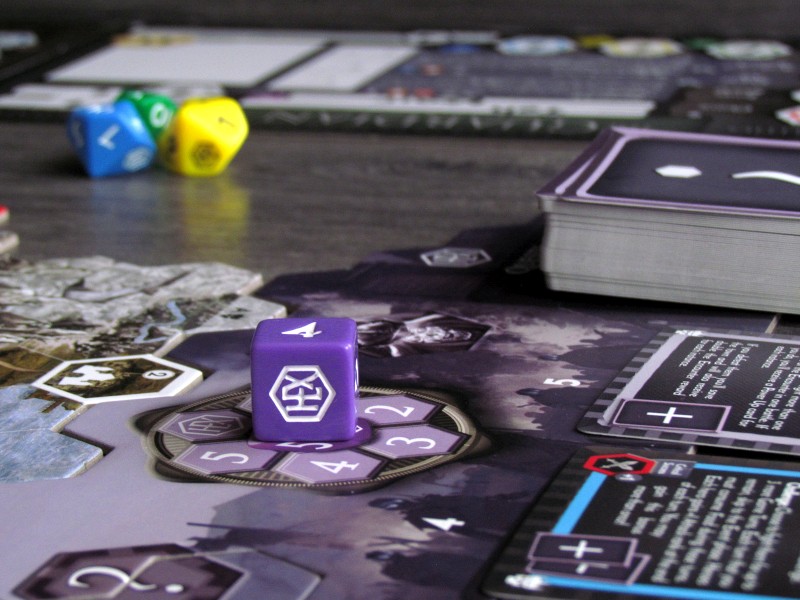 Everyone chooses a role card, which is covered with various statistics, especially attack, defense, life and energy. But that’s not all. Each hero also has a level of navigation, mindfulness and survival skills. The default values are modified by the race card to create a starting digits. Players can also name their character and choose their favorite opponent. At the beginning, the individual heroes also get gold and food, which they also mark on their boards. In addition, each player also receives three 10-sided dice as a starting gear.

Then it is necessary to prepare a map of the world, which starts from four boards (numbered A to D). The rest of the pieces consisting of hexagonal spaces will remain as a supply. Players will frame the whole map with boards of opportunities and tasks, which they fill with randomly drawn cards. Nearby, they prepare a stock of upgrade cards. Finally, they randomly determine, in which city a group of heroes begins their pilgrimage and everything is ready for play.

In their turn, players first move as a group, up to four squares. As they travel, they can simultaneously explore new areas, that they accidentally reveal from stock and can connect them as they wish. Above all, however, the team always chooses the way, how quickly they want to proceed or give up the movement entirely at the expense of setting up a camp (they can heal). This decision affects not only fatigue, but also the chance to get lost or even lose some energy, if they move recklessly. 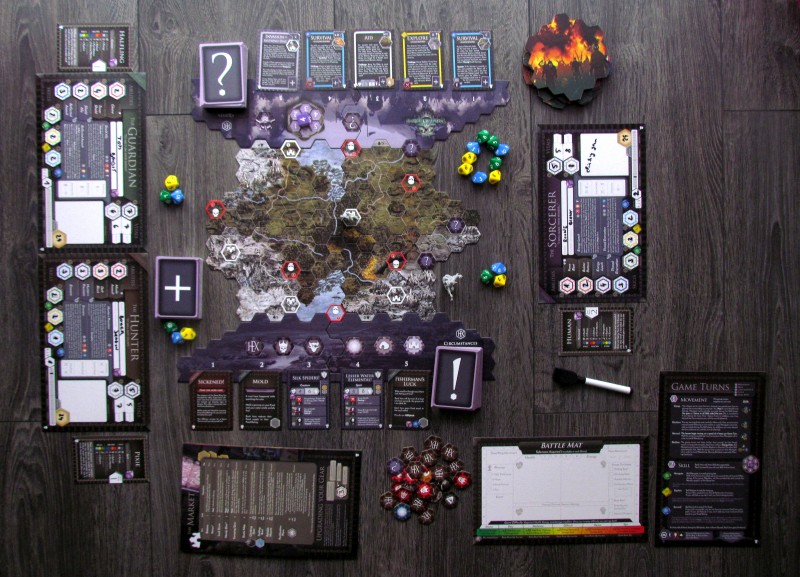 After moving the party, there is a skill phase. If the heroes were moving normally, half of them must now succeed in the navigation roll (everyone rolls). Whoever fails has to roll a hexagonal dice beyond their movement and move one space according to the compass, mostly in the direction they do not want.

In addition, players also roll on the search (and can get two gold, if successful) and above all on survival. Success means, that the hero found enough food in nature and did not need to reach into his own supplies. Insufficient value on the dice brings the obligation to consume food as much as the hero needs (depending on race), otherwise there is a risk of starvation. And this is not good, because it gradually makes players unavailable.

This is followed by a roll of dice. This is a random inconvenience for the player, whether it be an event or even an enemy. This may be a condition of lasting character or a situation, that must be dealt with immediately. Individual cards carry their rules directly on each other. 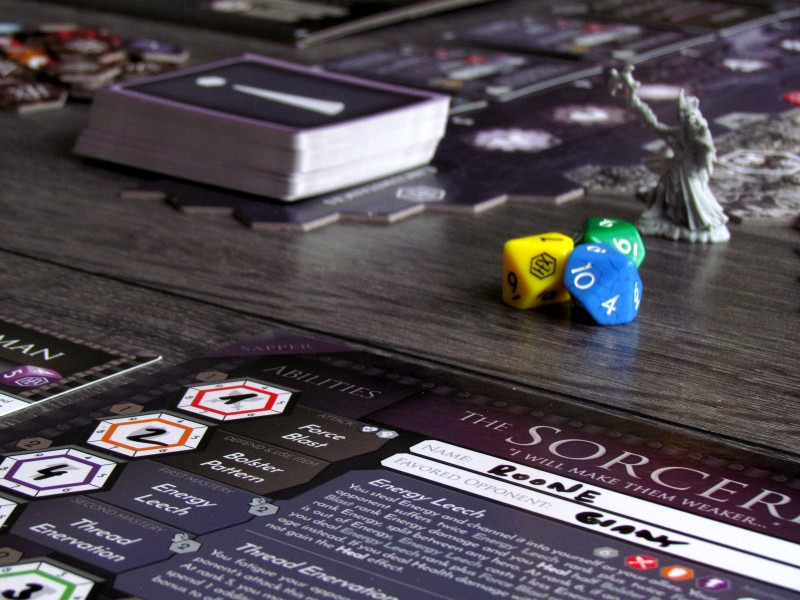 As a result of any of these phases, a battle may arise, whether players move to the enemy’s position or he visits them on some of the cards. To record its progress, they use a special battle mat, filling it with enemy’s life points and energy. At first, everyone will announce, whether they will defend, attack or use one of their special skills. They will always need to spend a certain amount of energy points.

And while heroes announce each numeric power of their action, they must also select the target of their attack and possibly report the use of one of the items. Part of the group can also escape from the fight independently of the others (they roll the dice for success). On the board now stands an attack force divided into blockable and non-blockable wounds. Opponents have each their levels, it can be an ordinary encounter or with a boss.

As a result, the dice determine, how the monster behaves. After planning, both sides simultaneously injure each other or block the damage. The hero may die as a result of a fight and his colleagues may either try to revive him or player has to choose and create a new character. Players are usually rewarded for winning a fight or a test. 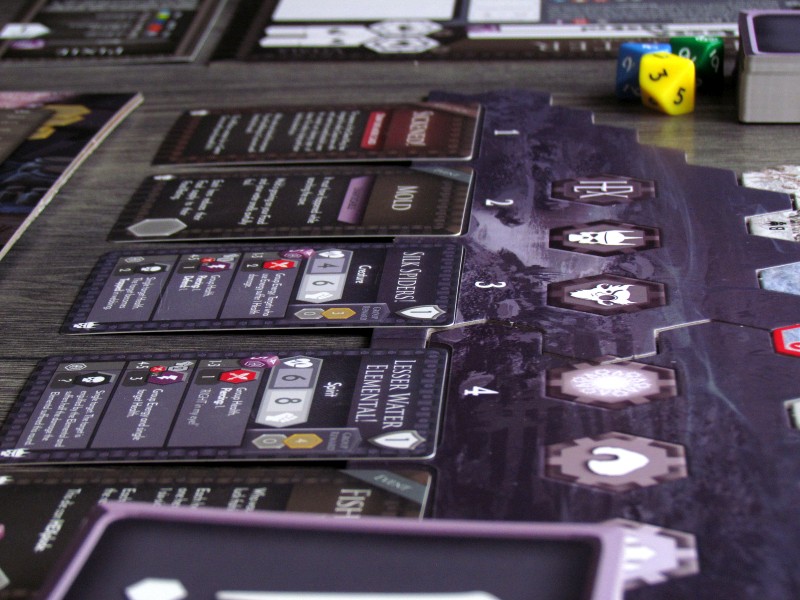 The end of the turn always belongs to the dead king. Sooner or later, as a result of the roll of the dice, he appears on the board and begins to travel between cities. His current goal is always determined randomly.

The map also shows the locations, that come out of these established phases. Players can visit the city, ruins or places with quests. In this case, it is not about circumstance, but an event is waiting for the player instead.

Players in the game try to perform quests and thus improve their characters. Each ability space has a number of boxes around it in a circle, which can be used to strengthen heroes at increasing cost. Gradually, they become killing machines, that just don’t stop from fear of something. Players collect valor points for their achievements during the game. It will determine, how well they did. But to find out, they must first challenge and defeat the Dead King. Only then can a group of heroes celebrate a common victory. 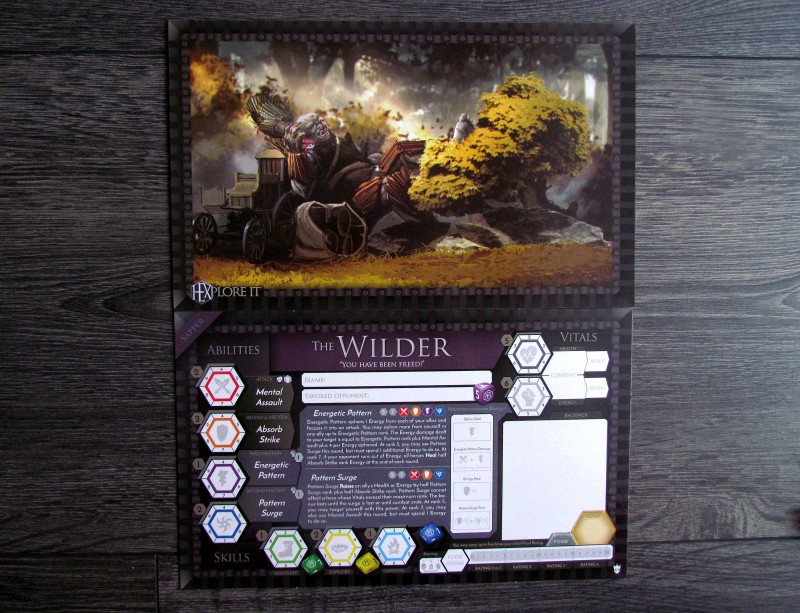 Right from the start of the review part, we must admit, that Hexplore It is all we have hoped it would be. Above all, it is about wandering around the map in a completely open-world style. Nobody tells you where to go. It’s all up to you as a team of heroes. All that, while you see your enemy, the Dead King, striking at different places of kingdom and plundering cities. While players can rip them out of his claws again, the main opponent becomes darker. But heroes are also increasingly dangerous, when they decide to challenge him.

The game offers a great atmosphere and the feeling of truly building your own hero. Here the authors managed to stand behind their label from the lid. You really create and improve your character as in the right RPG. But character creation is fun. And recording statistics on the boards means, that you don’t have to move any cubes or manage any other moving elements.

We like exploration in the game and the constantly changing offer of tasks. To complete them, you have to go to the city, where you get a new one. Indeed, individual locations on the map often have their own cards, that lend them special features. This is a beautiful way to further expand the game. The more we are curious to see, how Forest of Adrimon will enhance the game. 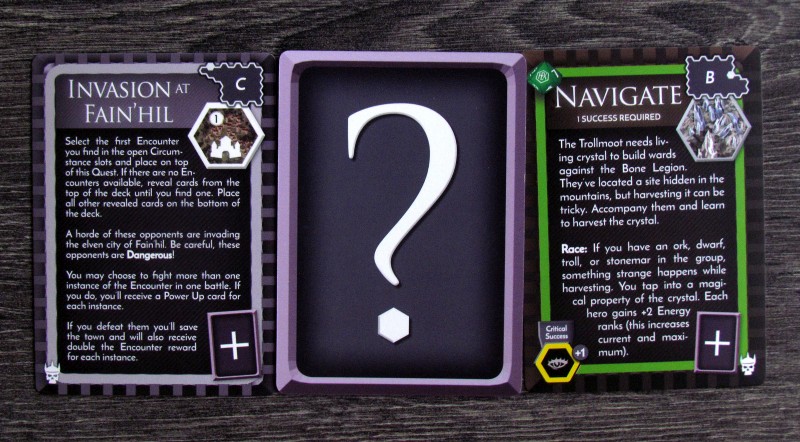 Using the battle board, players can also adjust the game’s difficulty. At its bottom, you can find several sections, that offer six different levels. Their choice increases the number of lives the enemy has.

Some small rules are hard to find in the rules. And there are surprisingly many, especially in conjunction with various keywords. The index will help you find the majority. However, their confusion may slow down the otherwise relatively simple game. In terms of pace, the fight is much about writing and evaluating cards. 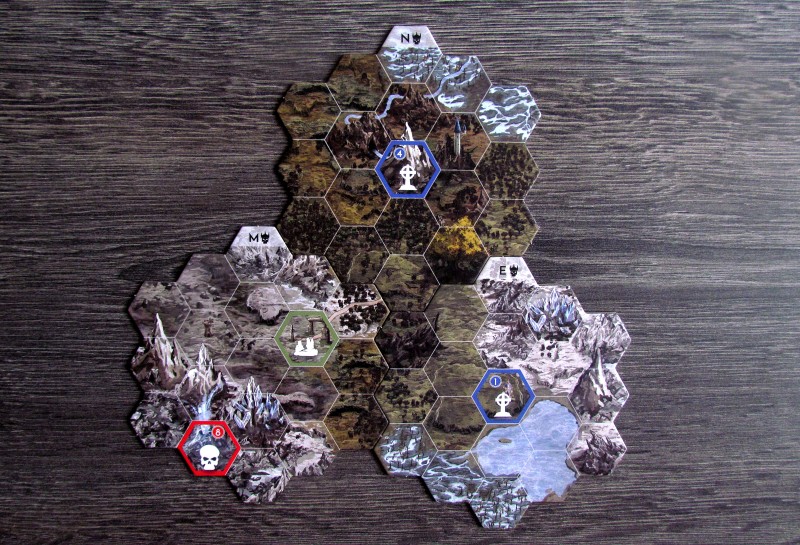 The replayability is already so great, but the authors have added an element called the Living Card Campaign. In addition to plain text, several cards also have a QR code, that will give you a new task from the Internet. There are many of them randomly chosen, so even after playing all the cards in the box, you will not know everything. However, the most important thing for the overall experience of replaying is, of course, the construction of your hero, which can really be different every time due to the large number of combinations of race and profession.

But here we have to stop and mention one element, that we have not talked about at all. In addition to the rules, there is also a story booklet in the box. So if you want, you can spice up your experience and read more about some of the moments of your story. The book is full of beautiful illustrations and nice reading, which is only here to add even more depth. It doesn’t mean any extra choice, don’t expect anything like that. 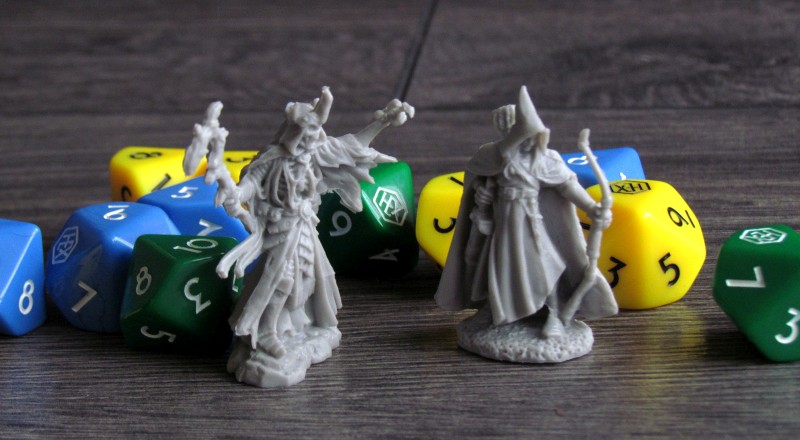 It is a cooperative game, which again carries the danger of a leading player. All team members are expected to decide for their character, but because the information is public, others can give you advice. And it may not be to everyone’s liking. In doing so, games in more than one have the right juice from the adventures experienced together. Game time is then significantly higher and usually ranges around two hours and sometimes exceeds them.

- processing is rather textual
- fighting is not random, but other elements are
- game time
- long rules

by Dušan on 05. 08. 2019
Hopelessness can take on different forms. Once you descend into the dark depths of the undead castle’s labyrinth, it can only get worse with every [...]

Review: Stowaway 52 – on the road to sabotage

by Dušan on 06. 04. 2019
It hangs in the sky as a foretaste of our dark future. Or rather the absence of any prospects for our race. The aliens arrived in orbit and announced the [...]

by Dušan on 21. 03. 2019
Counting has its own fixed rules. No confusion, no unexpected conclusions, only clear rules and a world, where chance has no place. Now, imagine that you [...]

by Dušan on 31. 01. 2019
It dreamed, that all my plush toys were alive. The evil king of the nightmares, Crepitus, sent his servants under my bed. Their eight legs are trying to [...]

Review: Rechen-Rally – from zero to one

by Dušan on 19. 01. 2019
Race is always about decision-making in fractions of seconds. And it’s not just about pedaling, speeding, and steering. For all this, you must also [...]

by Dušan on 14. 01. 2019
I feel like I have become a royal chef for this one moment. It’s time for a great celebration, because Princess Grega got engaged. There are guests [...]
Comments
Leave a reply