Review: Hitman Holiday – A game for all assassin fans! 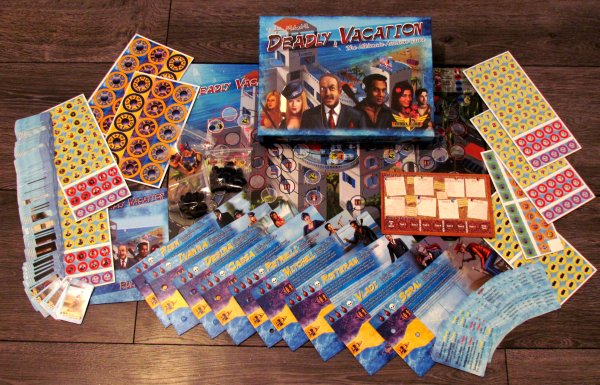 Another envelope has arrived, and with it another contract. In recent days, it has been getting worse. I have tried rejecting the mails, but those pushy clients even showed up at my doorstep to plead for me to take up the contracts. My reputation has gotten ahead of me, with but a few mere public warnings on the TV news. Yes, you are right – not everyone has a stomach for this job. But I´m doing what I have always been doing, and with motivation… I am cleansing the human race.

Alas, my brethren and I are not as far into the trade as we would have wanted. We have yet to earn our rightful place among the top assassins of the world. That is why when a package appeared on the desk of our editorial room, we jumped upon it. A board game titled Hitman Holiday was neatly wrapped inside the simple looking parcel. It was a rare opportunity to test the pre-launch game that is yet to appear on the market. In these days, Kickstarter game projects usually get funded and closed for a long time before we even get to see a well made set of the game.

Hitman Holiday impressed us with its almost complete pre-production version. The author of the game is Dominic Michael Huang. If it funds successfully on Kickstarter, Hitman Holiday will be released in mid-late 2015 as the debut game of his indie publishing company Medieval Lords, based in Singapore. 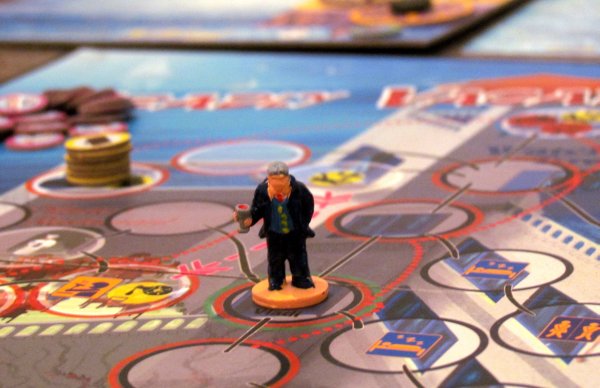 The game is packaged in a blue medium-sized box, heavy with plenty of components. The most prominent one is the game board, which shows a large luxury beach resort. All locations are connected by various paths and shortcuts, and the fields are littered with icons.There are also two decks of cards – the bigger deck serves as aid cards for players, while the smaller ones are action cards. There are also cards that are used to determine which target you are assigned to.

You will definitely not be disappointed by the size of the player boards, which have spaces large enough to not only place up to four cards on them, but also cater to three dials each. They represent the needs of the player´s character, ranging from the most basic needs such as nature´s call, through to food and even sleep. Even assassins are human, and when diarrhea catches one in the wrong place, they will be looking for a toilet just as desperately as anyone else. But after assembling the player boards with the dials, you would notice that they are each a little different. And we are not talking about their portraits. The dials actually have different values for different characters! Some have weaker bladders, and some can survive without food longer.

There is also a pile of ´cache´ tokens belonging to each character, containing their portraits on the flipside. These represent weaponry and other stuff that the assassins have planted in locations throughout the resort beforehand. Our list of components finishes with the miniatures themselves and one board with notes. This bulletin board not only tracks the turn, but also displays the traits of individual characters being targeted, helping you to identify your would-be killer as the game progresses. 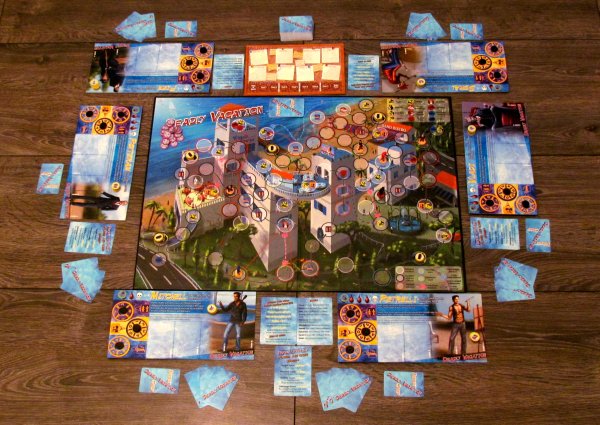 At the beginning of the game, players choose their characters, take their matching tokens and miniatures, then place them on the starting spaces with the apropriate names written on the board. Using a deck of cards, each rival randomly selects one card to be his target. This is the target that he must assassinate. Security patrols and suitcase (cache) tokens of all players are also placed accordingly on the game board. The players then draw three secret action cards from the deck.

The game begins with the first turn of the first round (denoted on the bulletin board). Each turn, four action points can be spent by the player. Of course, action points are not just for movement into neighboring spaces, but also for other actions, such as observing one´s surroundings (for hidden planted objects) or for disarming those same objects. Players may try to assassinate their targets either remotely from range (field linked by red lines) or when standing together on the same space.

Interestingly, no points are needed to use cards, which allow for immediate planting or tweaking something in the hotel permanently (such as adding security cameras). Planted cards are kept secret by players and are placed on their own board. The location of that planted object is then marked by placing the character´s token there with the matching number of the card slot on his own board. There may be multiple cards of the same kind on one card slot spot, which means players can plant many objects in many places. 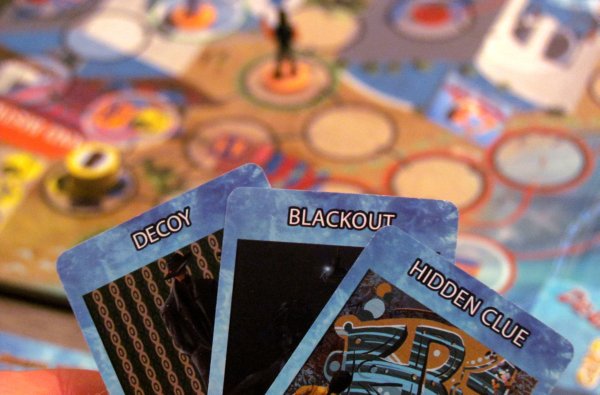 At the end of each round, players must increase the value of their needs (dials). Only if he visits the right place at the hotel, can he reset the dial value back to zero (toilet, bar, bed). If a dial ever exceeds its maximum value, the bounty hunter loses one life (a drop of blood in the upper left corner) and point. Life is not so important except for using special shortcuts, but points are definitely very precious to lose. Players can get points through a variety of ways and not just through murdering a target only. They can also turn each other in to the authorities (as soon as they find out who is coming to get them) or catch a murder on a security camera that they planted, which guarantees points for sabotaging. But beware, a player who reports a wrong killer will also be punished.

Caught players or those who reported wrongly become unprotected. They may then be killed not only by their assigned assassin, who was hired to murder them, but by any other assassin as well. At this point, everyone in the game just wants to see him dead and he may be killed even in front of innocent people and nothing happens! So much for the boy who cried wolf. Once players have played two turns, a new round begins and they get new action cards. On top of that, everyone must mark one trait of his target on the common board (each character has exactly four attributes) which then allows the targets to deduce better on who is coming after them.

All contracts have a time limit as the contract employers are not patient. Once time runs out (eight rounds or three total murders in the resort), it is time to reset and start the second contract period. Again, new targets are distributed to players and the game continues until either another eight turns are played or another three total kills are made again. Alternatively, the game ends immediately when someone manages to accumulate five points. The winner is always the player with the highest score. 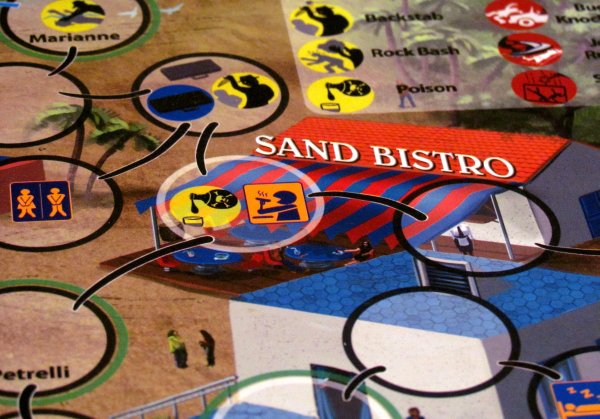 Hitman Holiday is a game that breathes fresh air into deduction games. At the same, deduction is far from the only thing to do, although it may lead to scoring points. More fundamental is good movement around the board (by predicting early where to meet your target) and proper usage of action cards. The game offers plenty of playing style options to bounty killers, while allowing them to go for each other´s throats.

Player elimination was removed from the game at the last moment (in earlier prototypes death was permanent) and this is good news. Even the death of your character does not mean you will not have any chance of winning. Murdered characters simply go back to the resort immediately when it is their turn again and the chase continues. He loses one of the previously collected points though, or he may even go into negative points. Thanks to this, all rivals are largely involved in the game from the beginning to the end.

What is worrying about the game? It is not easy to unveil the plans of others and outsmart them. Only good planning allows for a chance at scoring. Your rivals are not stupid and are as smart as you, such as when dogs go after a wily fox. The game works perfectly with the concept of public places with witnesses and hidden cameras, which can thwart even the best planned murder. Battle for points is tough and uncompromising. And you still have to fight with a healthy body. Needing to take care of your own physical needs is very important here, and if you ignore the call of nature, it can really backfire at the wrong time. 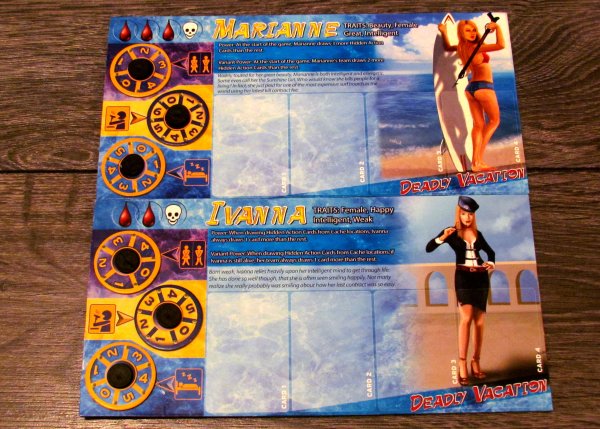 The basic version of the game can be played from five (to ten) players and provides an incredible entertainment. Four actions are not too much and waiting for a turn is not so long. In addition, the game board actions apply to everyone, so you have to keep track of who is doing what. At least to find your killer. The bigger surprise then is, that the match really takes less than an hour. It´s because of the well-set conditions for the end of the first and second round or its early termination by acquiring a lot of points.

But you do not have to fear that you will not be able to play with only two, three or four players. You just have to play other variants of the game, which are described at the end of the rules. Even those work very well, but we have to admit, that because of lack of time (review must be synchronized with Kickstarter), we could not test them all as much as the basic version (we played a total of 12 games in bigger numbers of players).

The game contains a lot of tactics that are not seen from a glimpse, and if it were not for drawing of cards (for hidden actions and target assigning), luck would not be present at all in the game. Thus, while players´ fortunes are enough to guarantee diversity of individual sessions, you are also capable of turning the pages of your own destiny the whole time. 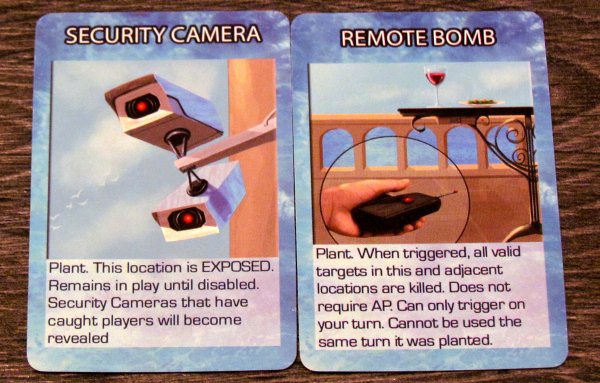 When we really look for flaws in the game, they can only be found in the manufacturing and not the game itself. All the boards are of good quality, but character tokens are very small and difficult to handle. Unfortunately, this is necessary as they need to fit easily on game board spaces. The second complaint goes to miniatures, which are not as good as those expensive miniature war games, but still better than meeples and plastic pegs.

Hitman Holiday is a game of hired killers. It has a great atmosphere, because all the players involved are not only killers, but also victims of each other! This implies not only great fun, but also a necessity to deduce, as you must be aware of who might just be that dangerous killer of yours! Hitman Holiday is an excellent game that has an average game time and can entertain up to ten players at the same time!

The Kickstarter will go LIVE on 10th Feb PST 8AM
Game can be supported on Kickstarter:www.medievalords.com

Hitman Holiday is a murderous board game. It will kill many of your afternoons and evenings and you will be glad it did. Players have to be aware of not just killing, but also of character needs, which can cost them some health and scores. You must occasionally visit the toilet or bed, otherwise you can not win the fight for the deadliest throne. Again, the game has a great atmosphere. The tense situation where two characters go for each other´s throat is indescribable. In addition, all mechaniccs work very well and the game was nowhere a drag. Hitman Holiday was obviously made with a love for games. And it will not be hard to find your love for it as well.