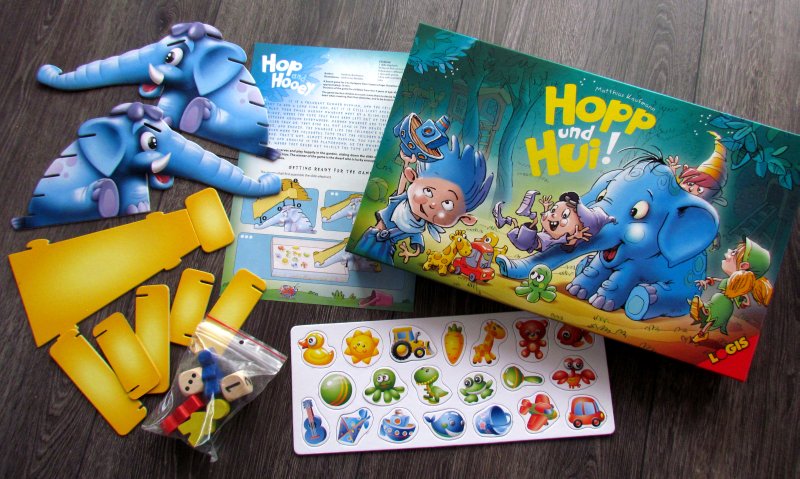 We always thought, elephants are our enemies. Their herds swept our home, tore down everything they come across, and we were left only with our wet eyes. Until one day, when it all changed. A small elephant strayed into our village from one running herd. He not only helped us to build back all of our houses, but we also learned, that elephant family does not know about us living here. We are too small for them to see, when running. We have prepared for them the way. Elephant joined his family at the next opportunity. But from time to time, he and his family stop by and then we play!

Main entertainment for all the elves from the forest, when they have long trunk elephant on a visit, is to ride it down like a slide. Just as we see in the children game Hopp und Hui! (in English Hop and Hooe) from Lithuanian company Logis. Author of this fun for little ones is Matthias Kaufmann and illustrations were created by Gediminas Akelaitis. It all worked out in several languages ​​in 2014, but Czech is not among them yet (German and English is there, of course).

Box with its length corresponds to the fact, that an elephant with a long trunk must hide there. And we see it in the blue color on the lid of the box, along with all his small friends and a pile of toys. All this is also tasting, what children can expect inside the box. Just a little imagination gets them started. 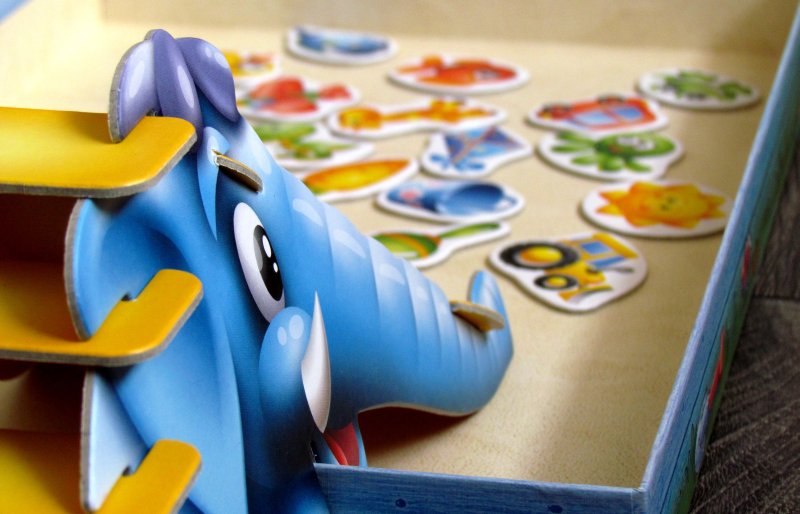 In fact, first and most important are cardboard components to assemble the trunk slide. Here is the most important finding a beautiful blue elephant, which creates support from both sides. Behind his trunk will lead cardboard stairs up to the top. Who will climb on them? Oh, of course! Box contains a large wooden colored figurines.

At the beginning of the game, players must always build their slide from two sides of an elephant, slide surface and stairs, because they are always disassembled to fit in the box. Fortunately, they are sturdy and do not require force. Elephant then hooks his chin in a shorter side of the bottom of the box, pointing the slide inside the box. In front of him, children spread toys tokens so they are pretty accessible and visible. After that, each player chooses only one wooden figure and starting player gets dice.

Each dot on the die means chance for dwarf to go up the slide by one step. Once he arrives to the highest point, he can finally run down and land in the safety of sandbox. On the way down, he can happily laugh, because in the end he always will be rewarded in the form of a toy. His owner then puts it in front of him and game continues by another climb and possibility of ride again. Game ends, when all tokens have their owner. Winner is the dwarf, who collected most of them. 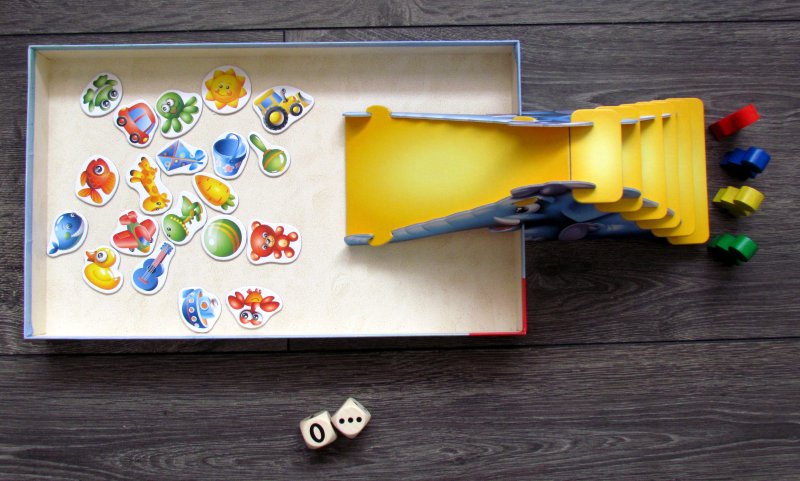 Hopp und Hui is great entertainment for children. It must be emphasized here, that we are talking about children between three and four years ago. For them, this is absolutely perfect gift box, which is primarily dominated by absolutely beautiful processing. All components (figurines and dice) are large enough and children do not have even the slightest problem with their handling.

It does not mean, that game can not host school children or even adults. But for those, there is no real challenge in the box. Basically, this is just roll and move game. There is no decision besides choice of tokens. This may affect victory and in case of small children needs to be slightly reflected (choice is clear for an adult).

Rules have two variants. Simpler one runs around with only numerical cube and we have described it. Then there is second one, that brings the second dice to play. It allows dwarves to exchange places. In addition, when on top of the road slide, player must roll dice to see, how many toys will he actually be able to pick up and capture from the sandbox. 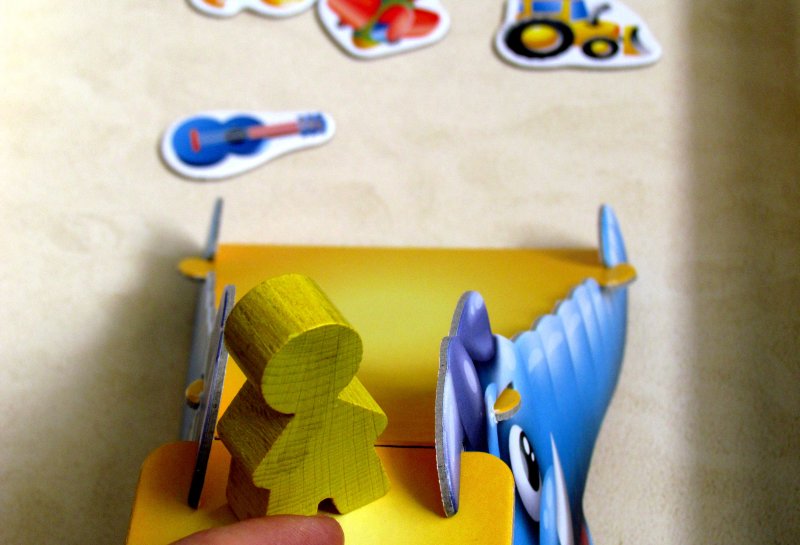 This version is recommended for older children (four to five). In each case, but the game speed is still great (in the new version ends by accumulating five pieces of the same color) and the more participants, the more fun.

Game can very well be improved by various other rules, such as collecting only those tokens, that your pawn hits. Or a choice of tokens, when blindfolded, announcing wanted toy in advance. Because each image has its own shape, children can remember their appearance and try to look for distinct ones.

In addition to the age limit (which is understandable), we see the biggest shortcoming in the need to assemble the puzzle before each match. Fortunately, cardboard components are cleverly devised (hooks on one side), so they many assembly – disassembly. 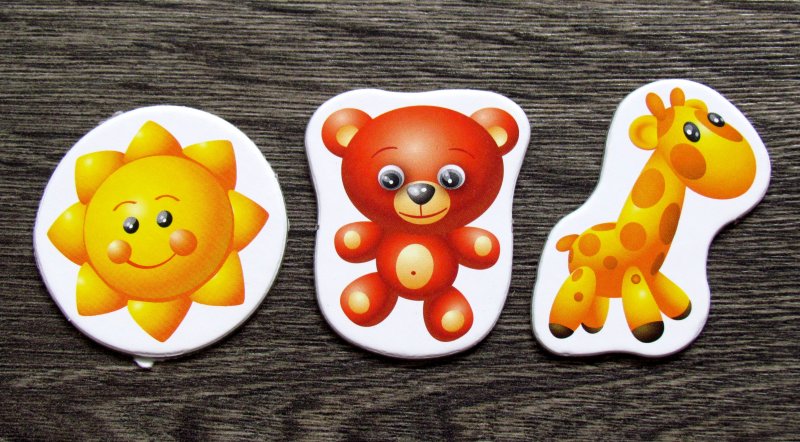 Hop is hooey and Hooey is hop. They are both fun for babies and simply works. We can not want any more from it and that is, why we are also truly satisfied. And the same goes for children, who sit in front of it. Cute illustrations and unforgettable elephant will see to it, that they feel comfortable with the game. Hop and Hooey is excellently prepared game for the little ones.

- folding slides before each game