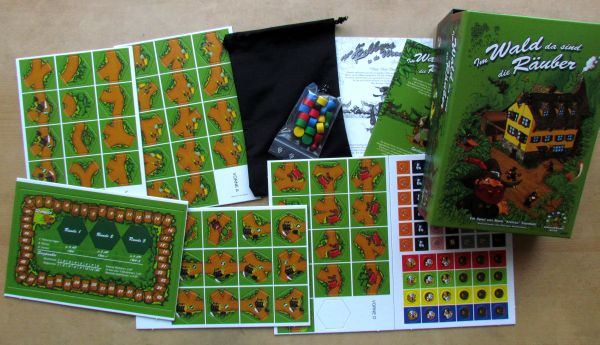 Forests are deep and are hiding many secrets. Among them are several robber camps. Once they settle down, these bearded start to hunt peasants. Each bystander is robbed for everything he has within seconds. But from time to time, they meet someone fearless and sometimes even man, who is looking for them. Lastraid, they found me, believed in me and introduced me to their lair. First part of my plan is fulfilled. Now I just have to become their leader..

Im Wald da sind Räuber nothing less is at stake, than position of leader of gang of robbers. For its main theme, game uses a classic German song of the same name, whose short translation was used in the introduction of our review. Author of this game is Mark Sienholz, who worked on graphics together with Thorsten Kettermann and whole mix was mingled in the magic pot of German company Krimsus Krimskrams Kiste. This all happened back in 2008, but we got a game in hand now and we would like to introduce it to audience outside Germany.

You find it whole in a low rectangular (portrait oriented) box with a picture of the inn hidden in the woods. Inside is waiting for us whole forest full of thieves, but also buildings lying around the road. These are all drawn on hexagonal tiles, which adds up together to 55 pieces and you first have to punch them out from sheets. Along with them are waiting for you tokens of thieves, forty circles with prey and two round chips, one for watchman and one for girl in trouble (yes, the one from title song). 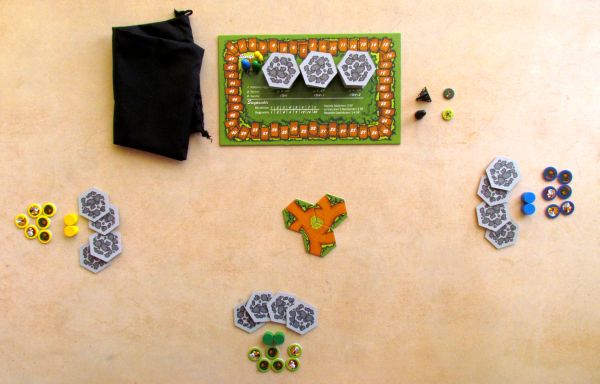 These cardboard components will be accompanied on their way through the forest by wooden pieces. When the whole game takes place in an environment full of rustling moss and clearings, there has to be this material present. Each player has in here one piece for monitoring points and three round tokens. But we must not forget piece for watchman and tetrahedral dice, that is not made of wood. The German rules are in color, while the English come only in black and white, but it does not restrict you from learning the game in any way.

Most large pieces from which you build your gaming environment as the game progresses, lead a seemingly wide and safe way. But it is quiet only at first glance, because behind the bushes are robbers hidden. Box then contains also a cloth bag (for tokens of prey) and game board, which will hold different piles of world pieces and you will also use it for tracking victory points.

At the beginning of the game, a player chooses his color and takes not only his own piece and token, but also six action thieving tokens . They allow usage of special abilities during a game. The last thing to get is one piece with camp in the color of the robber. With joined efforts, players sort out pieces marked with letter S and form the initial intersection from them. 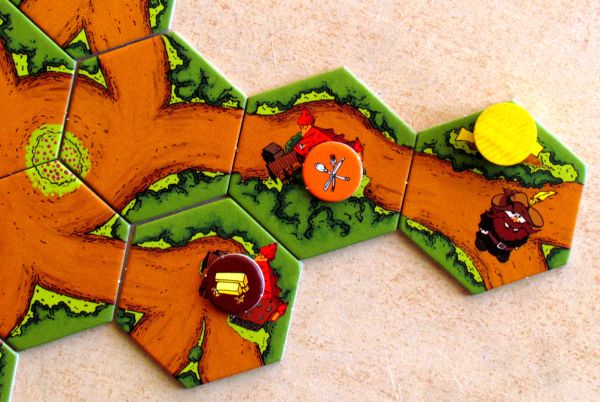 Around it will grow dense and impenetrable forest just in a moment. Shuffled large tiles are split into four stacks by twelve. Three piles are put on the game board on fields marking rounds one to three (Runde 1, 2 and 3). The remaining twelve are equally distributed to all bandit leaders. Other tokens are placed aside.

But before the game itself starts, you must prepare the forest. But do not forget, that it’s actually first phase of the game. You can prepare a good starting point for your robber camp, but also advantageous position of some buildings near you, so you can get there quickly. Players progressively play one tile and if that’s a pub, farm or hunting lodge, they must add randomly drawn prey token on it. When all the starting pieces are connected, players put their robbers in the camp and game begins.

At the beginning of each turn, player draws one piece from the stack for current round and immediately connects it according to rules to the board. He can at the same time also bring a guard or damsel in distress, if conditions for their placement are met. Watchman will patrol between farms, so you need two farms present in the woods to place him. You choose, which farm he starts in, and he them moves to other one, marked with a guard token. A girl just wants to get to the safety of blackberry bush (just as the in title song). 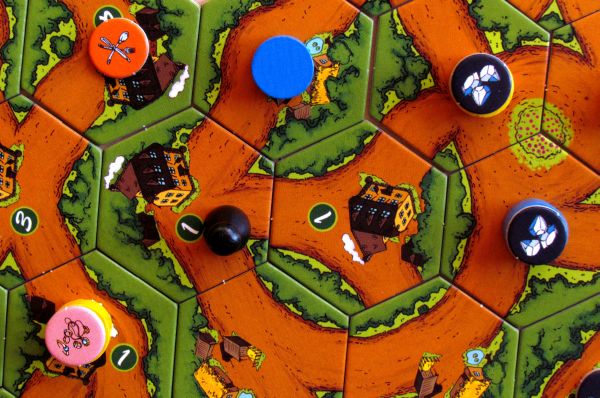 Movement of thieves follows. Everyone has a certain number of action points depending on the turn, which differs from four to six during the game. You can spend them for moving pieces from one place to another, but also for obtaining prey or for entering your home camp. Only there is token in safety and you can put it finally in front of you as acquired.

If there is a security guard in the game, players have one more duty to follow – rolling the dice and move his piece in shortest path towards the destination farm. Once he arrives there, he turns immediately and active player selects his new target in any other farm. When he walks around the board and meets a robber with the loot, thief has no choice, than to flee. But he drops everything carried and valuable loot remains lying on the ground, where he was caught.

Clash of thieves continues until supply runs out pieces. But after completion of each round, partial scoring will take place. Players get rewarded for sets of collected prey. The same will happen at the end of the match, when robbers get also points for each of kind or seized pubs. Winner is player with the highest robbed score. 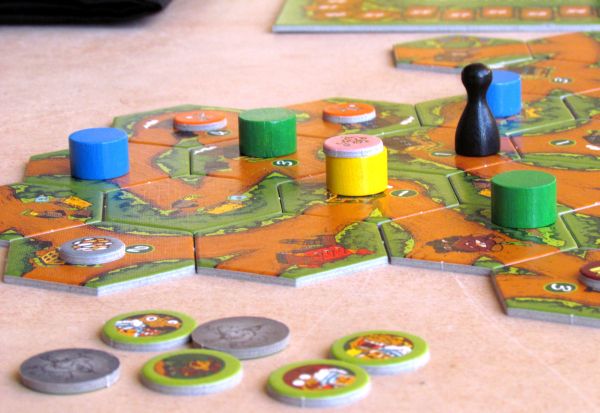 Im Wald da sind Räuber brings a new addition to family games genre. Games of placing pieces on the table, while expanding your world, are popular for many years. But you will not fill it just with inanimate pieces, but you will travel back and forth in the woods, collecting gold and diamonds.

From a strategic perspective, it is again a shame, that a player has only one tile to choose from. He must therefore put this randomly drawn wood part and connect it. When luck is not working in his favor, he is at least trying to hurt his opponent in some way. By creation of roads, intersections and buildings, players add new scoring options for them, because number of loot tokens increases. And its good, when they are placed near your lair.

During the entire game, its also important to collect sets of identical and different tokens. Players therefore do not plan routes only for closest prey available, but trying to get those, which will bring them biggest point gain in the end. This is a very nice supplement and adds another layer of necessary decisions to the game. During match, players have also one-shot action tokens, which can be used at the right time to add an important advantage. 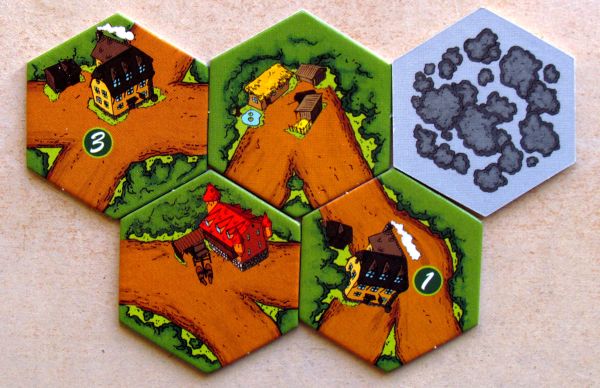 A duel is not bad and with interesting concept of guard and girls in distress, it also offers good entertainment. But players will most likely use separate parts of of the forest and their robbers will actually not meet for the whole game. This is the time to invite another player or two, who will move forward this peaceful rivalry.

Even then, it is still a family game, which is enriched with direct interaction. Players can also harm each other with giving right directions to the guard. In addition, more rivals vie with each other for specific tokens of prey. There is not enough for all and you will most ceratainly steal it from each other. A very crucial is to make good starting position for your camp, which can later affect the success or failure.

An interesting element is not just scoring during game, but also opportunity to get points for other things. Specifically, we’re talking about seizing pubs, where your raiders celebrate their achievements. As a result, even seemingly decided game can still be reversed. 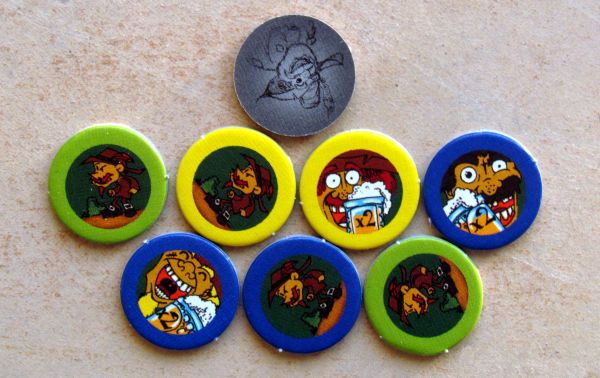 Game time will be filled with this movement for about one hour. Thanks to this, Im Wald da sind Räuber does not belong among entirely short games, which is a little pity for such a simple game. Shortening the game a little (especially in four opponents) would certainly be a benefit, because it tends to feel long near the end.

Im Wald da sind Räuber is in its simplicity surprisingly deep game with more layers, that it looks. It offers plenty of room for tactics, so it will not only entertain children, but even adults and a little more demanding players could finally return to this type of games. It offers some interesting ideas, which is dominated by the possibility to thwart enemy plans with the help of a guard. Im Wald da sind Räuber is definitely worth consideration, whenever you’re looking for a simple family game.

+ interesting guard mechanic
+ more ways to earn points
+ scoring forces you to choose your prey
+ game is not just about laying tiles
+ good with two, but the more the better
+ each time a different layout of the playing area
+ chance to steal prey

Im Wald da sind Räuber is a nice family game inspired by classic German song, which is not known to us. But this does not prevent us from enjoying interesting possibility to help damsel in distress, while robbing in the woods. Its much more, than ordinary game of laying the pieces usually brings. Players will become thugs running around the forest, avoiding guards, steal from each other and trying to accumulate as much treasure as they can carry. Loot distribution is determined randomly. In his turn, players must grapple not only with the inability to choose a tile to place, but also with more ways to move their robber. Two player game offers a different experience, than multiplayer, with more space and freedom on the board. Im Wald da sind Räuber is not very well known game, but that does really not mean, you should avoid it ..