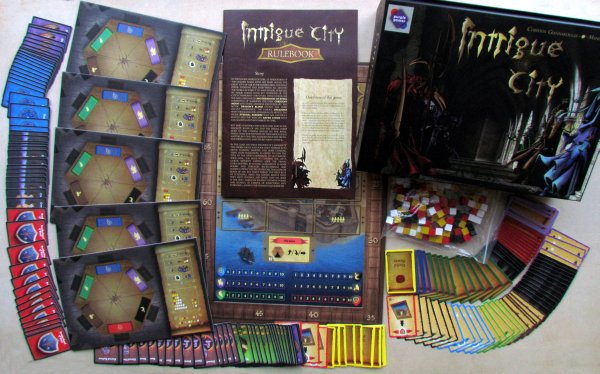 Every city in the world has a gray eminence in its background, who pulls the strings. It does not matter, whether he is called mayor, chief of magistrate or even a lobbyist. All decisions take place in the background, out of sight of ordinary people and new desires of these people are presented to citizens as such amazing ideas. Fortunately, not all people fall for their magic and eventually fight for liberation. Each town can be Intrigue City.

This is also case in the city Aar, where our story takes place about injustice, claim and hope. Each of the six guilds aims their claim for the throne in board game Intrigue City. Its authors are Christos Giannakoulas and Manolis Zachariadis from company Purple Games based in Greece. Illustration and graphics were created by Panagiota Pardavela. From acknowledgments at the end of the rules, it is obvious, that also another greek publisher Artipia Games worked with them on development. Those are designers of Briefcase (review), we tested recently.

Game is hidden in a large box, which is dominated by illustrations of castle corridor. All claimants to the throne are waiting among colonnade. Folding game board reigns inside the box, showing a picture of the city surrounded by walls. Its space is covered with nine action fields, but also two scales (intrigue and round counter). Down at the bottom, there are six more rows with numbers from one to ten, used for monitoring power of the various warring factions. 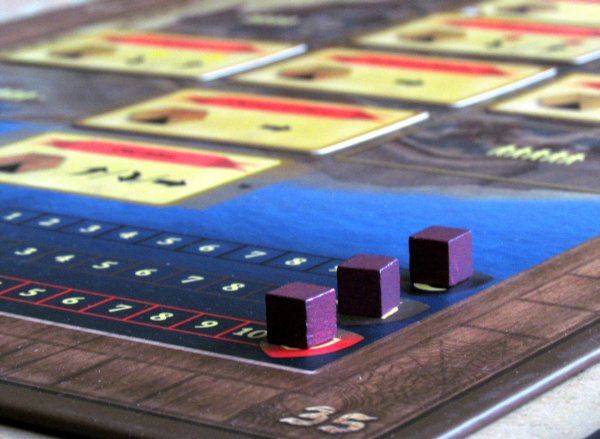 Each player finds also a board just for himrself. On it, there are instructions for setting up the game, counting final score, but mainly top view of a hexagonal table in a Spider’s lounge. This is the place, where masters of all six guilds meet and each has his own place at the table marked with coat of arms.

There is, of course, a good dose of cards. Thirty favors, sixty competence and ninety balance cards, all divided by guild colors. Horizontally oriented is deck of influence cards divided into basic and advanced pile. These cards along with favors are the only ones, that are wearing some iconography. Game will use also a number of wooden components, such as cubes, figurines and tokens representing influence in the city.

Preparation of the games begin by placing the board. Players then occupy its area by influence cards, that represent possible actions and their amount varies based on number of rivals. Purple cubes are used to measure power of individual fractions in the six lower scales, while purple disk will move with passing time, as players go through several rounds of the game. Cards of balance and favor are placed beside game board, divided into color piles, first with picture up, second with picture down. 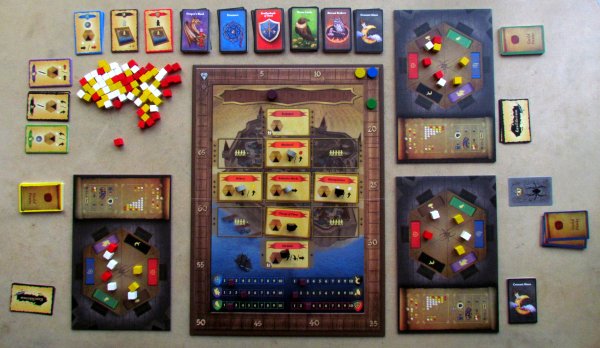 Each player chooses his color and gets influence token and corresponding set of powers cards, which are shuffled and placed in front of him. He also takes one board and two pieces – gray and black, representing one defensive and one offensive action. To begin the game, players deploy starting amount of cubes to show affect to factions of their choice.

Players take turns to move according to intrigue level on counter around the board. It is always the player, that has the lowest value, that should play. At that moment, he can send one of his pawns to any free (without opponent pawn) action on the game board and execute its action either on his board (defensive) or on opponent’s one (offensive). This is decided by color of figurine sent (gray = defense, black = assault). Selected activities are performed immediately and provide intrigue to the player, represented by value from selected line on the board (number of spiders on the sides of the row).

This is moment, when another player gets his chance to send one pawn. Player can even send two pieces at once, if he remains last after first action, but then he must pass word to his opponents. Intrigues are gained only for some cards and players are trying to avoid them, because they reveal their actions to ordinary people. In case of defensive action, player is rewarded by favor from the guild, he helped. This card can then be played at any point in turn, either as a defense against opponent’s attack or to gain other benefits. 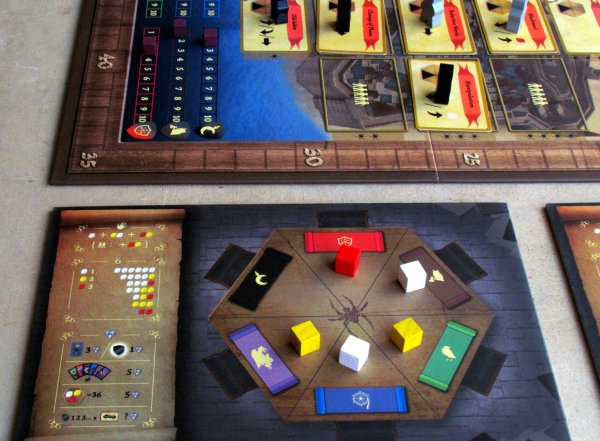 After all players have sent their workers, they check their own game boards. From beginning to the end, they seek to achieve balance in as many guilds as possible. This balance means, that value of cubes lying on slice of table belonging to this family has value exactly six. For each this achieved goal, player takes one balance card of that family. This affection then influences final scoring based on strength of the family at the end (scale on the same board). This ends current round.

Two rounds are always played, when time comes to change active era. This happens, when turn counter moves over spot marked with Roman numeral. Here, players use their own guild decks, draw top three cards and select one of them. The other two are thrown aside and will no longer be used in the game. With this vote players decide, whose families powers will shift and for how much.

Once players have finished the last fourth era, its time to settle final score. Each balance card obtained during the game have values according to power of family it belongs to. Yet there are even more nifty rewards waiting for intriguers, based on variability of balance (more families), unused cards and more. Player with highest total score is winner of the game.

Intrigue City prides itself on an interesting combination of defense and attack option. Players do both each round, but only with those places on the board, that are still free. Game combines more established elements into one and somewhere it succeeds, while elsewhere not so much. These conflicts still remain the main focal point of the entire competition.

But it is also reason, why no one has a chance to build anything, that lasts. Whenever you create a good position, other players can (and will) destroy it. You can defend to a certain extent against attacks, but even that is not enough and in the end, you are missing feeling of a job well done. Here, unfortunately, the game fails on all fronts and is the most fundamental flaw of the whole design.

This makes the game very conflicted, which is good, because players do not have chance to rest even outside of their turn. They must constantly invent new approaches and tactics and adapt to attacks of enemies. Situation is rapidly changing with every action and it results into the best parameter of this game. 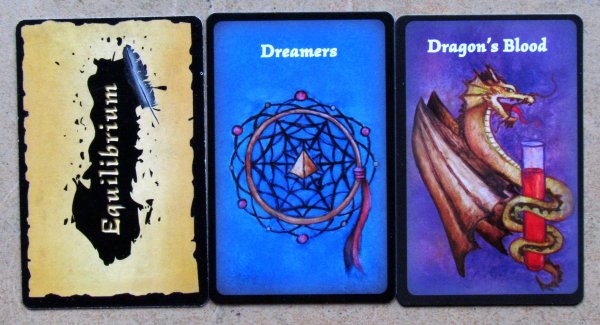 Mechanism with intrigue is done very cleverly. The stronger action players use, the more they move forwards and come later back to their turn. Sometimes, this can be seen as an advantage, sometimes not. At the same time, player with most intrigue gets three points at the end of the game.

But everything comes back to support of families and increase in their power. It can be easily affected by players at end of each era. Likewise, point reward is also affected by collected equilibrium cards, that are always combined with power of the guilds. Mechanism of variable payment is really good.

What is wrong is the atmosphere. Theme of the game is not exactly original and feel coming out of processing does not deepen power struggle for you as a player. Unfortunately, it is associated with other drawback – game time. In two or three, it is possible to finish whole game in an hour, but in five, match takes at least 90 minutes. In addition to significantly increasing the waiting time between turns. Fortunately, you need to follow others and respond to their actions, so you are at least partially interested in rival turns as well. 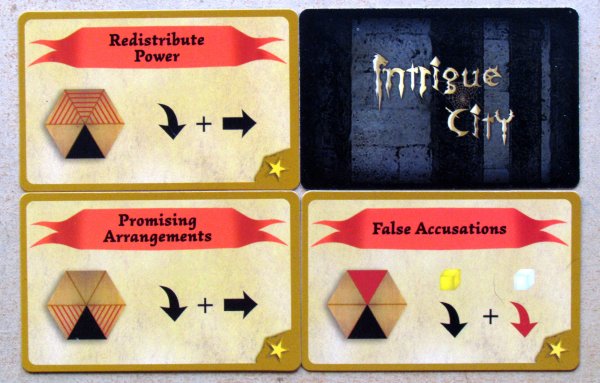 In smaller number of players, lower number of action boxes is offered and with two, opponents are clearly defined. Players are returning hits back and forth, which ultimately creates quite tactical combat. With multiple rivals, you never know, who will attack.One of the players can defend even to more attacks per round. This can result into problem called “bash the leader”.

Intrigue City tries to combine several mechanisms to create an interesting experience of fighting control over a city. At some stages its doing well, but the overall impression is rather average. Unfortunately, game carries a lot minor imperfections with it and although it offers a nice strategic options, it does not finally deliver as it could. Intrigue City is a game, that eventually does not stand out from the average crowd.

- long with more players
- what you create, others break down
- players usually conspire against opponent, who leads
- not very interesting processing and atmosphere

Intrigue City tells another tale of rivaled clans, that are fighting for one city. This time, they need to gain influence pretty quietly. The more respect you get in some families, the more chances you have to win. But every such family also has its own importance and this plays a crucial role in deciding the winner. Players must intrigue, attack each other and defend against opponent's raids. But no matter how hard you try, whatever you create, others very quickly tear down. Trying to find right balance between support for families brings sweet reward. Game works in any number of players, but with more opponents, game time becomes uncomfortable as well as waiting for next turn. And if someone gets into a significant lead, others conspire against him and let him fall to the bottom. Even the atmosphere will not save this game and eventually Intrigue City is an interesting experiment, which is a bit disappointing.