by Dušan on 14. 09. 2015
0
previous article
Review: Dungeon! - one cave, many monsters
next article
Reviews: 7 symbols, 7 nations – your lucky seven
Contents 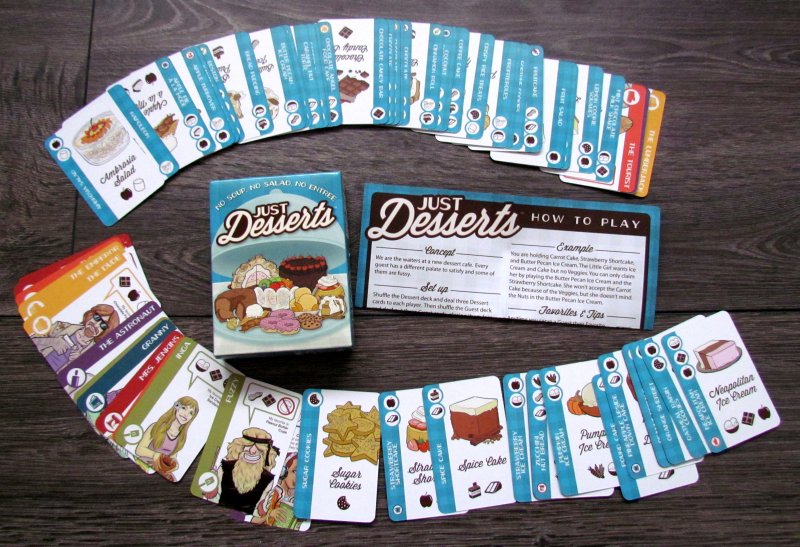 I see sweets everywhere. My sweet tooth is already unbearable. Everyone around me is enjoying the cake, but with ingredients I have allergies for. I almost feel gentle touch of chocolate and cream on my tongue. But all these are just ideas. I wish someone came and offered me a cake, I will be able to enjoy!

You also see desserts everywhere? That’s good, because you are best target group for card game Just Desserts from Looney Labs. It was invented by none other than Andrew Looney, creator of our favorite games Loonacy. New game bears stamp of year 2015 and was illustrated by a pair of Brooke A. Allen and Andrew Heath.

Neither new box will disappoint. It maintains size we have seen with other Looney games like Fluxx. And inside, beneath picture with all sweet goodies, hides a set of hundreds of cards, which can be divided into two types – guests and objects of their interest. Each such character has a balloon with three ingredients listed. These are flavors he is interested in and one of them can be his favorite. In the lower left corner, there is also important assignment. And then there are delights, that show name and a picture. 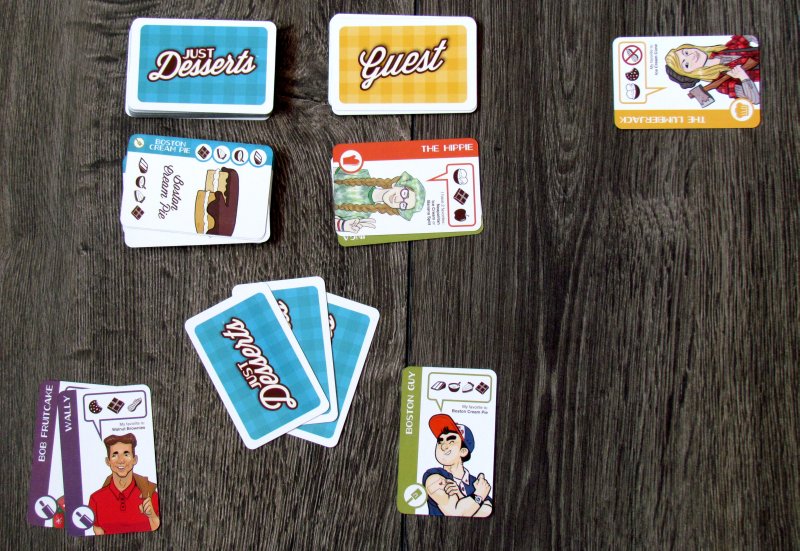 Gamers will definitely have to feed their guests. At the beginning, offer is created from these two decks – one presenting three currently incoming guests (rest creates a draw pile) and second deck of desserts. Each participant will receive three pieces of these food cards. Then, all remaining cards are set aside as a reserve.

Start of players turn is based on drawing new piece of dessert and also adding a new visitor into a queue. Only then can player choose from three activities – either pass on serving and draw another card or exchange any number of cards from his hand with a new random draw. Only a third and final option is really a game related and represents an opportunity to serve up to two customers.

To do this, player has to lay out desserts, which one of active guests is interested in. Then, as a reward, player may take that card and can also get a tip. But for a tip, player must serve favorite food, which is described on the card, apart from above mentioned ingredients. Some characters even love two kinds of sweets. Such success is reward of one extra card. 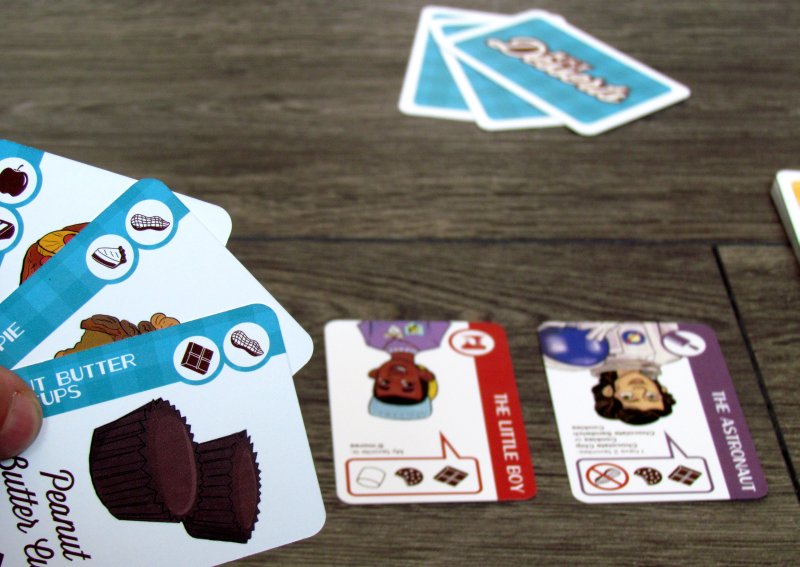 At the end of each round, players need to check, if there are visitors with the same symbol in the bottom left corner lying in customers offer. Current player has choice, which of these groups of visitors he sets aside. Game continues by collecting desserts and their distribution to guests until the moment, when someone manages to accumulate three customers with same symbol or five different ones. This player immediately becomes the winner.

Just Deserts is a fast paced card game that is actually basically very simple. But that’s not surprising, because on a similarly simple principles are based almost all games of Andrew Looney. And therefore neither is exception in Just Desserts, which this time revolves around collecting cards and their sets.

From any perspective, it is clear that this entertainment will be highly dependent on luck. Player simply needs to get right cards in order to invite and meet expectations of guests, who are located in the restaurant at the moment. But apart from these, there is always another one that has almost left and is standing in door – top card of discard pile. Order of dormant cards is decided by players themselves, so they can partially affect chances of others. 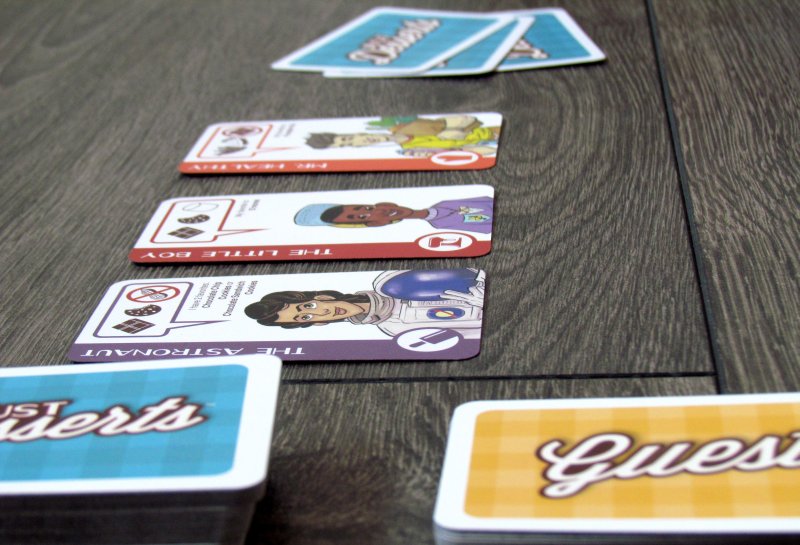 Now here is first hint of possible conflict, which actually occurs only sometimes in the basic game. But that is true only until moment, before you add advanced rules to the game. Suddenly everyone has option to steal each other’s sweet creations. To do this, as well as to defense against theft, is precisely to meet favorite sweets of visitors (allowing you to immediately to steal card). Tug of war is the most fun element of the game and because of it, game is constantly changing and evolving.

Suddenly, this crazy game is creeping into chaos. And here we are again in area, where many people do not like a flagship of Looney Labs – Fluxx. Crazily unpredictable and uncontrollable development of the game. This time it is not so pronounced, but even here, we find a little bit of this.

Game is for its basic premise surprisingly entertaining. It works great as a relaxation for a quick round anywhere. Battles persist for reasonable fifteen to thirty minutes, just depending on luck. But also on amount of participators from two up to full five opponents. This game gets longer as well as waiting for individual turns, which does not well to overall experience. Therefore, it is recommended especially for three and four players. Game with two is a little bit different, but again, faster and more fun. 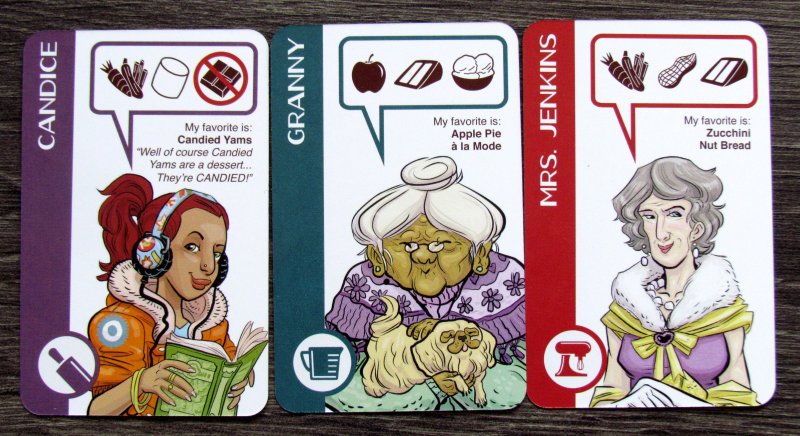 Just Desserts is a game that will not become some chanting classic, but definitely a card game, that can provide effortless fun. It nicely fills short period of time and can even surprise and sow seed of a decent rivalry. All that remains simple, casual and exciting in the way we like. Just Desserts are sweets, that you can make bitter for other opponents in their mouth.

Just Desserts is a crazy card game, in which players collect desserts and distribute them to visitors. But they like only certain ingredients and other hate. And then there are favorite candy, which allows players go after each other's neck and steal their cards. This game gets necessary dynamics, but also unnecessary delays with bigger number of players, when you wait too much for your next turn. Chaos guarantees fun for the right audience, making Just Desserts another good successor of Fluxx trend.