Review: King´s Gold – our prince is giving away his gold 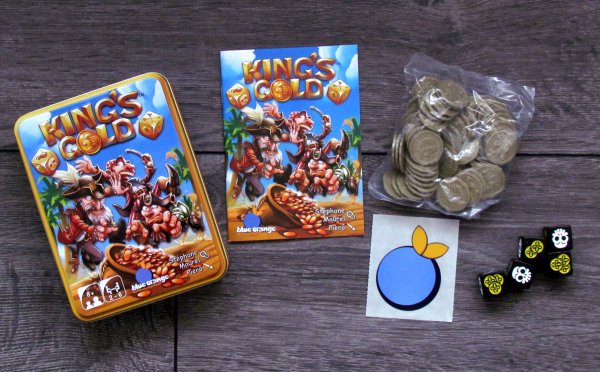 Not so long ago, gambling was interesting and exciting stuff to do. I do remember it wel. You could play and bet everything, but you never knew, if you end up with a win. Instead, you also might as well be arrested and put behind bars. Those were the golden days before our king introduced taxes. Since then, cards and dice are boring entertainment for all.

This game will include dice and it is not quite true, that it´s no fun. At least in hands of Stéphane Maurel and his King´s Gold game. Illustration were done by reliable Piero and all this creation was invited into a box by publishing company Blue Orange Games, who recently also overtook all the games from Jactalea (eg. Blue Lion – review).

Most players wii be already attracted by metal box, in whose lid is embossed picture of pirate duel. Everything revolves around a purse of gold, which can easily shatter and discover new and new owners. Even inside the lid everything sprinkles. First of all the five dice with symbols of the skull, gun, gun and gold. 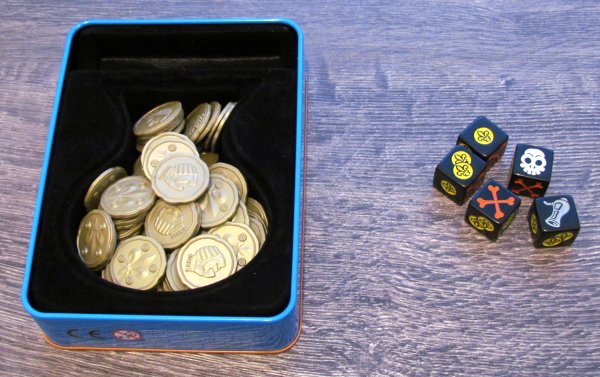 Largest compartment of suede bottom is shaped like a purse. Here, coins will hide for the entire game, but only thos, that have not yet found their owners. Except players, also one other character is waiting to get rich from gambling. If you read carefully previous storylines, it should be clear to you, who are we talking about: the king.

At the beginning of the game, gold coins are all spilled into the bottom of the box and not hid inside some bag. Dice are taken by the starting player and yes, game can already begin. First gambler and all other players after him as well, have three chances to roll dice for combination of symbols, that will bring them some benefits. In addition to the interior of the rules, these options can be found for easy overview on the back of the manual, so if you are playing first game, you should have it at hand.

A choice is of six options. But player must wait for their real implementation until he decides not to roll any further. First of possible combinations is robbing a bank and gaining money from its purse. To do this, players need one cannon and second dice with coins. It was nice to get money so easily, but that is not all. As the fee of this robbery, player has to take same number of coins from bank again and place them next to the box, where they create royal treasury. King is becoming satisfied now. Skull with coins means, that player is not stealing from the bank, but from one of his opponents. 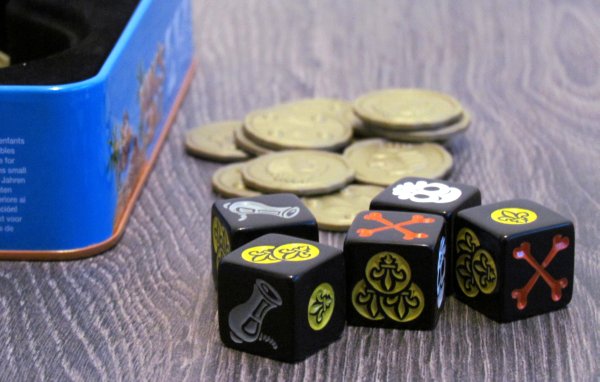 Remaining three combinations need all five dice. All coins mean, that player gets entire contents of the royal coffer. Five skulls are for stealing all the coins from one of opponents and this makes for very insidious action. Five guns have tremendous power to end the game prematurely, because player can get all the coins, that are still left in a bag (box). If it is therefore useful to try for this combo sometimes at the beginning of the game, because player can also become winner instantly.

But we said six options, as you rightly mention. The last is not so cheerful, because it assumes, that the player either did not roll any of the valid combinations or achieved at least three crossbones during his turns. In this case, his turn ends without any action and must also move three coins from his pocket into the royal coffer. In the case of a combination of less dice, player can perform more actions per turn.

Game usually ends up, when all the coins from bank have found their owner. It does not matter, whether they are owned by a player or a king. What is important is, that the wealth purse is empty. The game is over and winner is player with the top-tier wealth. 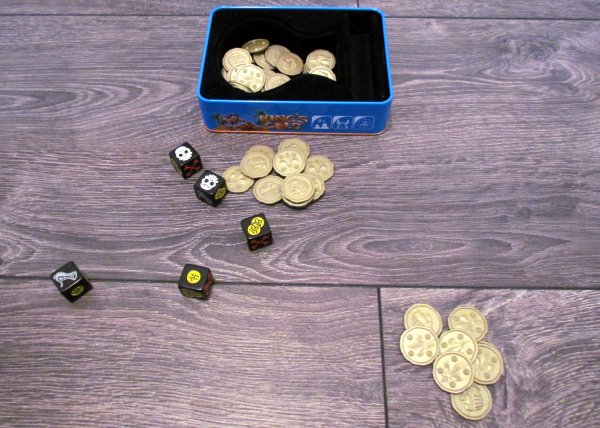 King´s Gold is a subtle dice game, which at first glance can not offer anything new. But luckily, throwing the dice is enriched with a huge portion of the rivalry between players. You are pirates and this time, there is plenty of room for dirty tricks. And it is up to players, how will they use symbols on dice and who they take it from.

But it all also depends on luck and on whether you succeed in your feast. Only in this way, you can grab gold coins. You receive it, but coins usually do not even heat up in your pocket and they are going elsewhere. Maybe to the king´s treasury, which is so full of holes, that you would certainly do not want such a chest at home.

Plus, but at the same time also con of game hides in its randomness. Player just outside the gates of victory may ultimately lose. Nothing is certain until last coin is dealt and then you can rejoice. Rolls are made purely of luck and only on the basis of symbols, players can make their choice. Fortunately, just this chance to act by yourself and decide, distinguishes the game from other games, which it at first glance resembles. 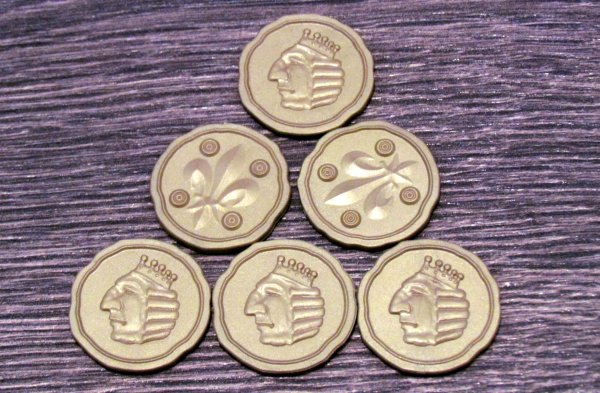 Crucial to the King´s Gold is lightning speed and compactness. You only need five dice and place to put the box with coins. And it all takes no more, than fifteen minutes, which is exactly the right time for such undemanding and random fun. Often are fights even much faster, but they are always full of uncompromising battles for coins. That is, why the game is the most fun in a higher number of opponents. You should not even try it with two and we prefer to play it with at least four.

King´s Gold does not offer anything revolutionary, new or challenging. Just relax and quick fun for a larger number of players. Quick dice harassment will entertain you, but you should not do be upset about the fact, that your coins might get stolen in last minute. King´s Gold is uncompromising in this.

King´s Gold is more dice fun, than you would say at first. Based on the need to roll the dice, you are searching for the right combination, allowing you to rob a bank, a rival or king. All steal money from all and most of the time, gameplay benefits from this greatly. You can collect coins and hoard them in your pocket. But only to the point, where someone else takes it. Everything is a matter of luck, but it´s so fun and fast, that you will not even bother. King´s Gold is undemanding entertainment on the go or just for fun. Do not take it too seriously and enjoy uncompromising rivalry, in which anything can happen.