Review: Kings Under Mountains – who will rule the underground? 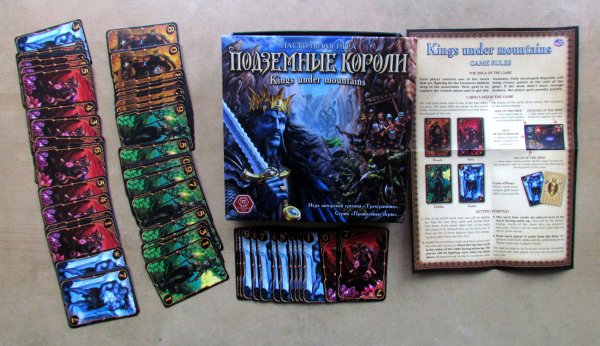 We were four. Kings, who ruled our races and all had their land full of animals and precious metals. But then people came and began to place one claim after another. We tried to resist, but when we arrived on horses, they arrived on elephants, when we pulled out the sword, they drew their guns and gunpowder. Our war could not be won.

They drove us to the brink of the stone abyss, and we seemed to have nowhere to retreat. But then we managed to capture stray drunken dwarf, who told us everything. Outside eyes of the people, at the bottom of the rock, there is a bunch of hidden tunnels and they contain big wealth. It is a life without daylight, but its still better, than dying under the hooves of people. We will go down, and if necessary, fight for our place there. We will settle these tunnels and once, we will return up, seeking revenge!

Kings Under Mountains is name of the new card game from the Russian company Right Games LLC. Like Kitchen Garden (review) also this novelty was introduced to players at the fair Spiel 2013 in Essen. Its authors are A. Shklyarov, A. Konnov and A. Paltsev and illustrations were prepared by O. Kalashnik. 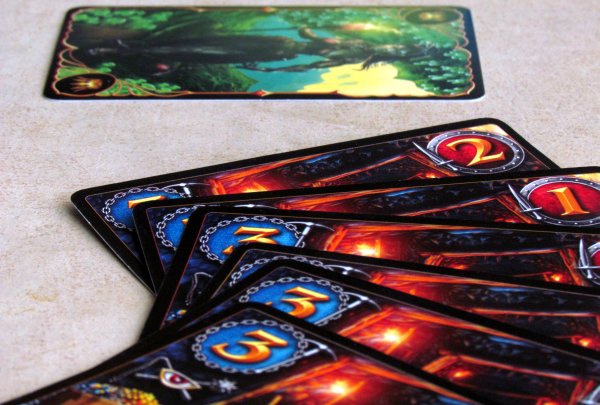 On the lid of the box, we find a mine, for which goblins and dwarves are killing each other on the background. But in the foreground, there is one of the kings looking over the battle. Maybe it could be you, when you open the package with tons Cyrillic alphabel all around. Only a few places with Roman letters are indicating, that this box will include English rules as well. Inside, eighty cards are waiting for players, twenty belonging to each of the feuding families – goblins, orcs, dwarves and giants.

Each race has its own illustration and background color. Card are different in their numeric value printed in upper left corner, which indicates the strength of a particular unit. All the characters are the same at first glance, but only until that moment, when you look at the back of the card. In most cases, you’ll find drawing of a cave full of treasures on it. These caves not only have their value in diamonds on a stone table, but also the size and defense in circles in the top. Exceptions are only four cards, that have swords and crowns on the back side – these are kings themselves!

At the beginning of the game, players first select (either by agreement or by luck), which race will be their home. They put king of the dynasty in front of them on the table. All remaining cards are shuffled and laid down on table. Top four cards are spread on the table with mines up – players will be competing for these. Other four cards are then divided by race and create a pile representing the diggers camps. Each participant gets now a hand of six cards to start with. 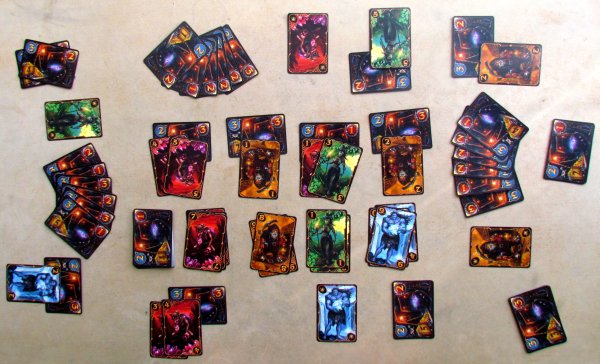 In his turn, player will first try to seize mine for his race. In his turn, he can play one card from his hand on any mine in the middle. Race does not matter here, only strength of units. Following inbounds must always have a higher strength, than last unit in the pile.

Goal of each player is to be the last to play the card in the correct order. Number of visitors required to seize the mine is equal to defense value in the top right corner of cave card. Once the mine has that much visitors, strongest (= last) takes it for his master. Player, who played this last character, takes it for himself and it may not be even his race, which he has used to do this. Units that occupied the mine are now moved to the camp, where they are split by race to existing piles.

Only then, once the mine is captured, player can finally start outfitting it. Here start second option, which can players choose during their turn. This time slightly different rules apply for workers, who may be sent there. Players can attach only workers of other races, than their own, because its inhuman to use your own people for slavery work. In the very end, they can even add a superintendent, when needed (eye icon on left edge of the card). Total number of cards must be equal to size of mine and power of units played must be increasing again. 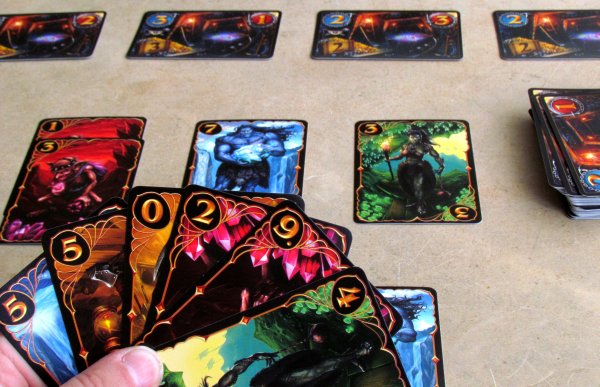 When the cave is full and running, it can be scored. But the workers remain working there (at least for you), because their cards are moved to discard pile with point of no return into the current match. At the end of a turn, player draws one card either blindly from the deck or he can take one of the top cards in the camp. Game continues until draw pile is emptied. At that point, players add up value of their operating mines and highest score points towards winner.

Kings Under Mountains is a simple card game, in which players must play their cards and send their people into mines. But the last card must always be the highest played and only the one, who sends last worker there, can capture it. For this, you need the right tactics, cards and a bit of luck.

Fortunately luck in this game is significantly suppressed by possibility of taking new cards also from the camp. This of course is not so much at the beginning, when everyone has to rely on the unit in their hand. Over time, with a few captured mines, supply of the cards to choose from is sufficient. 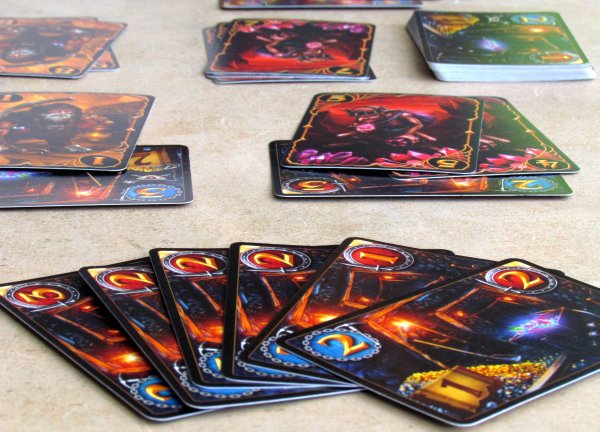 But the most important thing about the game itself are numbers on the units cards. Players must play low or high numbers and try to influence their chance for being the last person to place a card there. Because individual mines have different values and priorities, you will also choose carefully, which one you are interested in. All this is quite fast and whole game ends after emptying mine deck, within half of an hour.

A bit surprising is the fact, that game is actually not scalable between the number of opponents at all. There will always be four mines on the table, which players fight over as well as races present in the game. The biggest issue is just with the offer, because with smaller number of opponents, players have very wide selection of caves to go to. They do not have to actually ever meet on the battlefield, and each can occupy his two and stay away from enemy ones. Game then becomes not, like it was intended and its too solitary.

In three, it’s getting funnier and in four, game is excellent and exciting. It begins to be less predictable at the same time. Solution for the lower number of opponents is to reduce the number of stacks down to three, which works well in both two and three opponents. 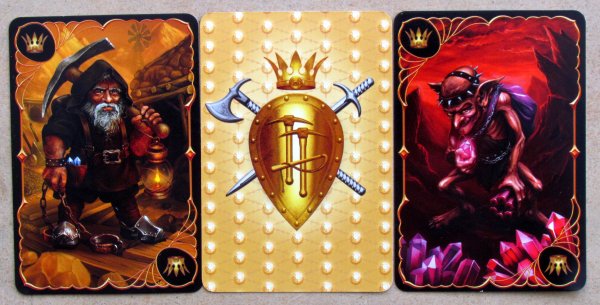 Very clever idea, which actually saved half of the cards in deck, is double-sided print. One side of the card has a mine on it, while other shows an actual unit. Although it does not look so good on table and in hand, as if each species had its own deck and a back side, but it is economical and game is suitable for carrying (although the box itself is larger, than the card game needs it to be).

An interesting option that would make this game very thoughtful (but greatly slow it down) is variant to play with open cards. So everyone knows about your chances and they try to really work well with what they have. In the game, you will reduce the proportion of luck and it becomes basically a puzzle challenge.

Kings Under Mountains is a nice and fun card game, that has just a little forgotten about match for two players. Its then too open and peaceful. And with all numbers, its a little luckdriven. Overall, we like mechanism for drawing cards, but also filling your own mines. This offers players more opportunities to play a card and whole match goes forward very well. That’s why we could recommend Kings Under Moutains as simple card game.

Kings Under Mountains tells the story of discovering mines of precious metals and mining them. Players have fantastical creatures of four races at their command. But they do not serve only master of their race, but whoever hires them. Most important about them is their strength, which decides about who is getting the mine. When player gets a cave for himself, he must be provide it with the mining personnel. Only then he can score the card. Sufficient number of such completed caves givem player chance of being declared winner. A little help can be awaited from luck of the draw, especially when initial cards are dealt. After that, players have an opportunity to draw cards from the camp, where they know exactly, what they get. But miners can not return to the game, so number of cards gradually decreases and game is fast throughout the whole course. It offers enough variation due to different mines, which are on the other side of double-sided cards. Game with two is not good, but you will enjoy a nice underground game with more players. Kings Under Mountains brings effortless fun card, that is not exceptional, but average.