Review: Kodama 3D – a tree and its colorful inhabitants 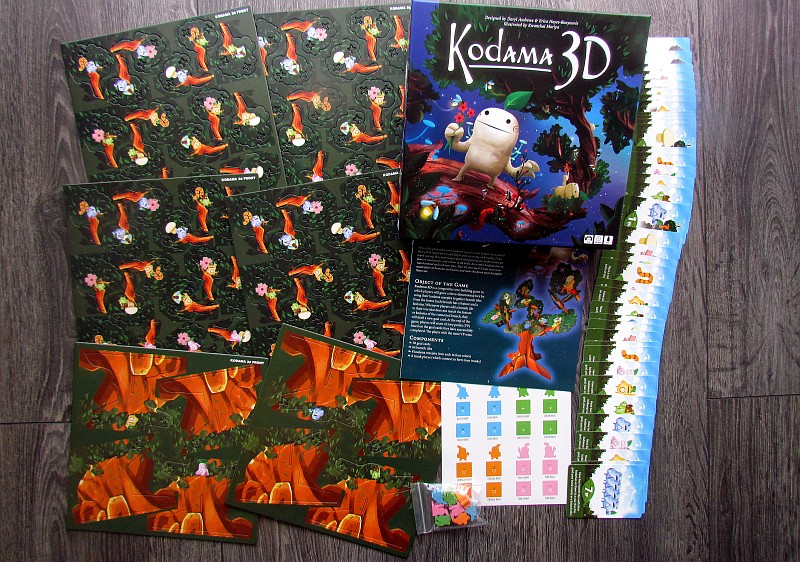 Even if you don’t see them, believe that there is at least one hiding in the crown of each tree. If you were gifted with the right ability to see, you could discover their little colored figures hiding behind branches and leaves. No tree will bloom without them, so the most important thing is, that they are always well and satisfied.

Players in Kodama 3D game, created by designer duo Daryl Andrews and Eric Hayes-Bouyouris, are also invited to return to the treetop once again. This is another Kodama game published by Indie Boards & Cards. The novelty was illustrated by Kwanchai Moriya and distributed by Esdevium Games on the European market.

On the lid we see several title characters holding different parts of tree life in their hands – flowers, mushrooms and leaves. Inside, players are getting a lot of cardboard branches (more than sixty in total), which they must first click out of their cardboard sheets. It is from them, that an offer in the middle of the table is created, in the form of a sufficient number of piles. Their number is affected by the number of participants. 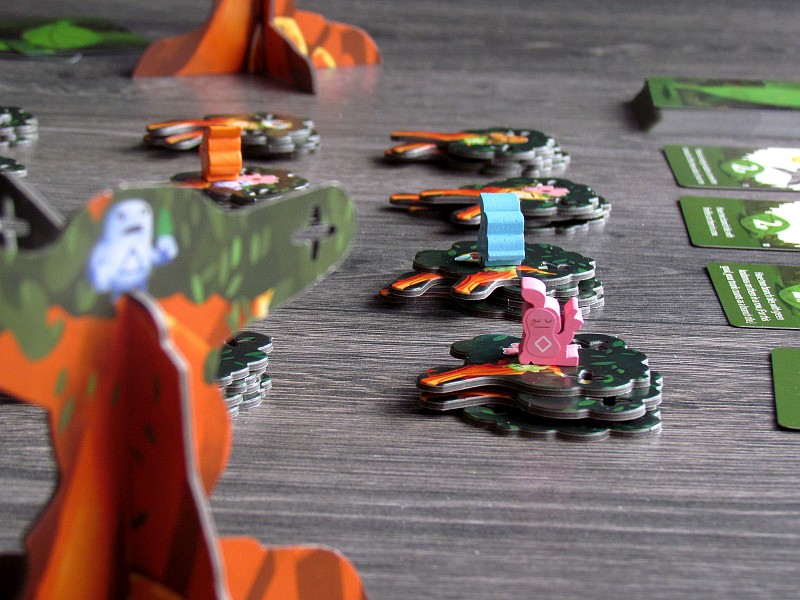 Each player then places one large cardboard tree trunk in front of him, which consists of two interconnected parts and its tip offers several cross holes for attaching branches. To do this, each participant will receive two task cards (they choose from three) and the rest will create a common supply with four revealed cards to choose from. The top of the trunk determines the color of the kodama, which miniatures the player should take. Gradually, one by one, they place one of their pawns on the piles in the middle, thus creating the starting line-up.

During the game, one tree will grow under the players’ hands. In his turn, he can always choose one of his two kodama pieces to get him the top plate to connect as new branch. Players moves this figure to a new place in one line and cannot jump over any other characters. Then, from the pile he left, player can take top tile showing a branch and attach it to his tree. 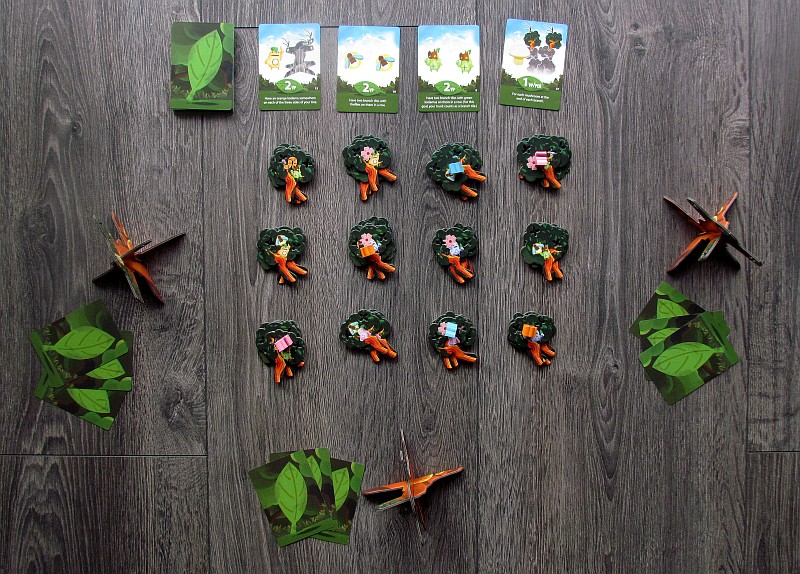 But even this growth has its clear rules. Basically, it is possible to place it anywhere, but the participants must have a few things in mind. First of all, it is necessary to keep the whole tree balanced, so that it does not fall over. If this happens, the branch must be removed and its allowed to grow elsewhere. In addition, if neither the color of the kodama nor the item displayed on the piece matches, then the player can take a new task card. This can be selected either from the open menu or blindly from the package.

And that’s about it. Players take turns in this way, move one kodama and take the corresponding twig. If the piece gets into the narrows and cannot move from its position anywhere, then the player can jump with it on any free pile. Once the supply runs out and the kodamas take away the last twig, it’s time to score. Everyone will receive rewards depending on the requirements they have met from the task cards collected during the game. The one, who has the most points in the total, becomes the lucky winner. 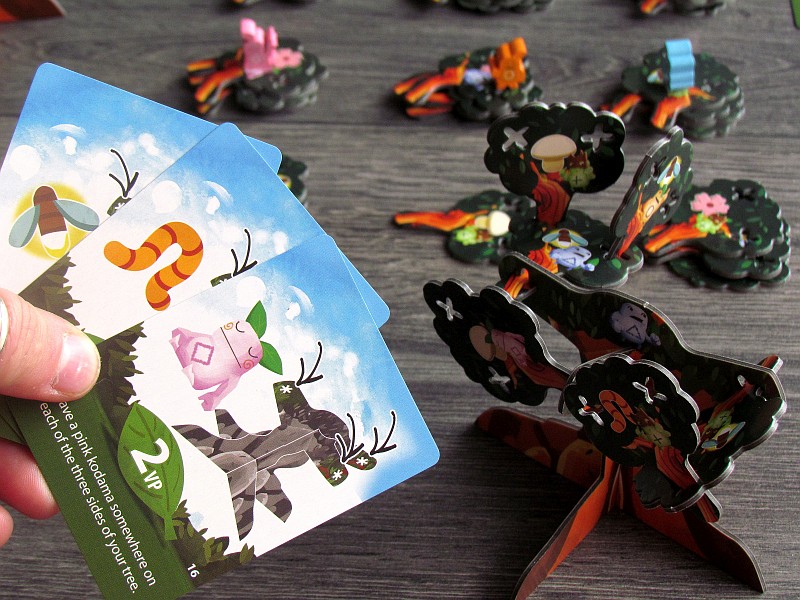 Kodama 3D is a beautiful-looking tactical game, that offers plenty of room to demonstrate abilities, but remains extremely simple. Moving pieces around the plan and choosing them is mainly about planning. The player always has two pieces to choose from and above all, he has to think about the correct transfer of his second worker to a new position in the upcoming rounds. It may be too late in the next turn for some actions, because apart from the fact that the players are of course trying to steal the pieces from each other, the characters block each other.

The game has grown from its original version to the third dimension. The interconnection of cards suddenly became the growing cardboard pieces. This makes everything look really effective, but this novelty does not add anything to the gameplay itself. Overall impression therefore depends a lot on whether you are bothered by more complicated manipulations with pieces and thus by a drop slower flow of the game. 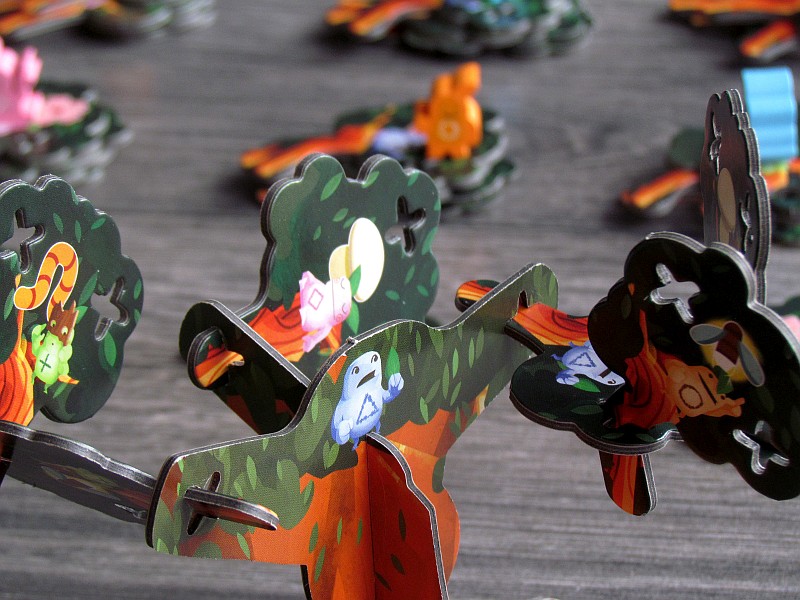 At the same time, this new processing of Kodama 3D makes it even more attractive for families with children who will also appreciate its simplicity. The rules are simplified, but there are still meaningful ways to influence the overall result of the game. The box contains, somewhat incomprehensibly, printed recommendation from the age of fourteen, while children around the age of eight can easily take part in the construction of trees based on our experience.

Secret goals bring uncertainty to the game. You can never say for sure, who has scored what points until everything is closed. But it is at this moment, that there is a coincidence moment. When someone gets a better task during the game, when it is no longer possible to change the strategy too much, then they have a significant advantage over others. 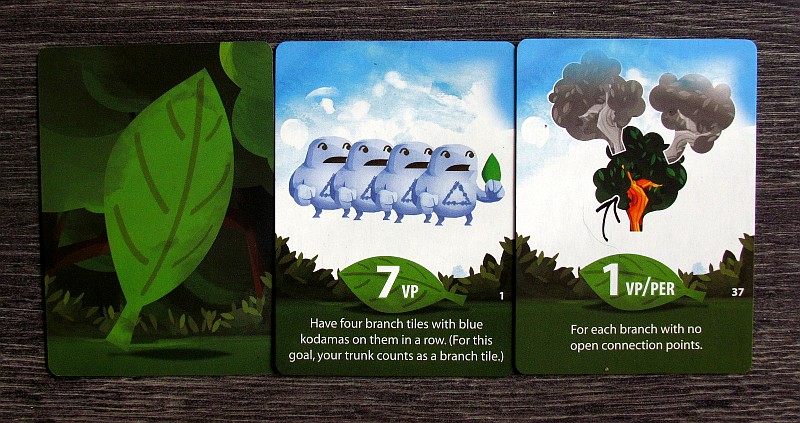 However, the new 3D element is also signed on the final scoring phase, which is a bit slower. Players have to check the pieces from all sides and look for the icons needed. Compared to cards, of course, it takes a longer time, but even so, the total time of the game is somewhere under three quarters of an hour. If there are more participants in the fight, the field for gaining branches becomes larger and the number of players does not have such a significant impact on predictability.

Kodama 3D modifies the original concept, slightly simplifies it, but mainly offers a more distinctive overall look of the game. And thanks to this, perhaps the new three-dimensional version will become more popular, because the game is really simple and attractive for children. Building a tree according to the given rules is simply fun, although it is not certain whether the cardboard pieces of the trees will survive regular play, after more than fifteen games we have completed. Kodama 3D is a very nice family fun.

Kodama 3D gives players the chance to build a real cardboard tree. In doing so, they must take into account the assigned tasks, which then are scored at the end of the match. It's all really nice to look at the trees grow, but at the same time it is the secret scores, that bring a certain amount of unfairness. Nevertheless, or perhaps precisely because of this, the simplicity of the game is an attraction mainly for families who will be definitely interested in Kodama 3D.

by Dušan on 17. 11. 2017
Originally it was supposed to be an expedition for only a few weeks. But our pickup did not arrive. The helicopter remained sitting safely on the ground, [...]