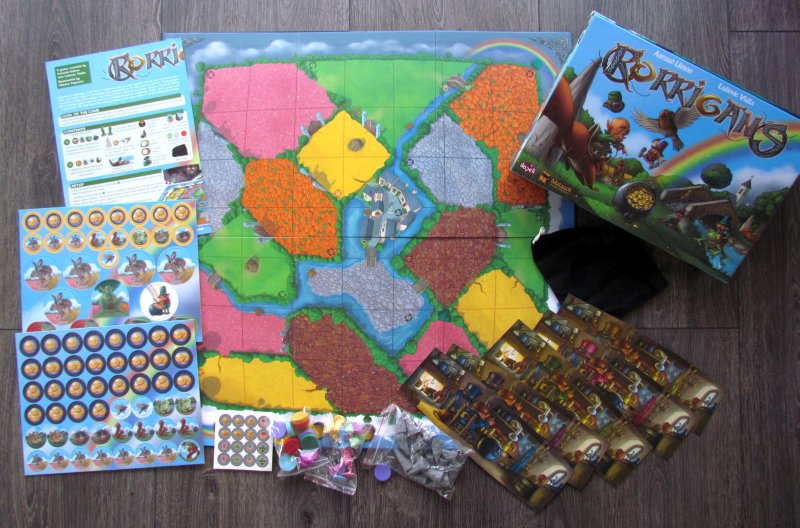 What do you do, when you see a rainbow? Most of us are looking for a camera or enjoys beautiful light refraction, which takes only a few minutes to disappear. But then, there are those, who at that moment take to their heels and sprint to the place, where this multicolored phenomenon begins. Right at the foot of every rainbow should be hidden a pot of gold, because it is responsible for that colorful glow.

We will also become one of the green elves. All of them are hidden inside Korrigans board game, which was created by Arnaud Urbon and Ludovic Vialla. This is a novelty for 2014, so we come up with a review with a slight delay. But that does not detract us from enjoying the game thanks to excellent illustrations by Oliver Fagnére. Game comes from french publishing house Matagot.

Box will easily rank alongside other games from this French company. It is therefore elongated in width and a little thicker. It’s all just so there is enough room for all those elves and they do not touch the lid with tips of their hats. We see just one of those races to emergent rainbow. But we to miss it out and look inside the box instead. 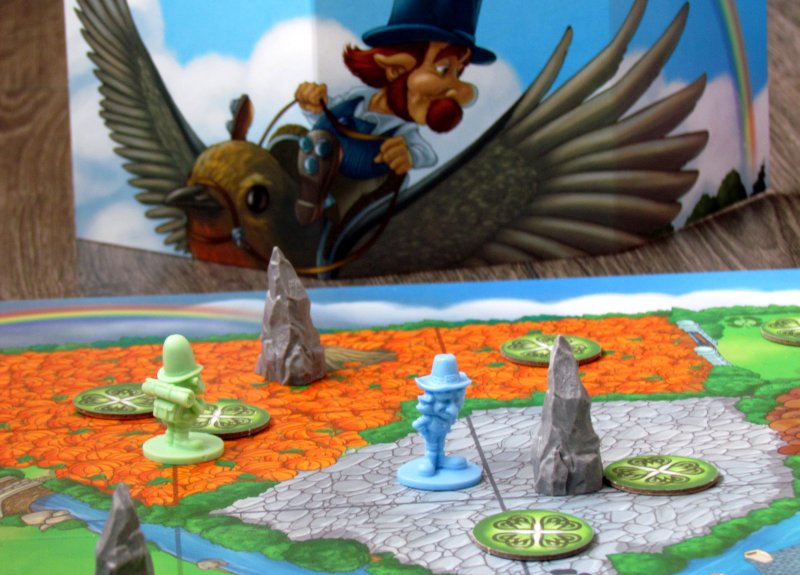 Big foldable game board split into six parts is waiting for us. Its surface is decorated by lots of enclosed areas wearing different colors. Around its perimeter, two sides have big circles on them, indicating possible coordinates. Only now, you will notice, that whole world is divided into many squares (of a total of 49).

Players will also find five screens in top floor of the box. Only now, we get down to real heart of the game, where are ten elf figurines is semicircular formation – two of each color. And at their feet is resting one pot of gold. Players also will be happy about pile of plastic menhirs in gray, representing the stone formations rising on the board. Packaging also includes set of stickers, which players must use before the first game to decorate those stones. Impression of the game is completed by round large rainbow tokens and a pile of cardboard tokens (four-leaf clovers and companions).

At the beginning of the game, players put a game board in the middle and equip each area with four-leaf clovers. They are divided into all locations randomly, their number is predetermined on each spot and they are placed face down, because they might contain coins or companions. Each location also gets a menhir in addition. 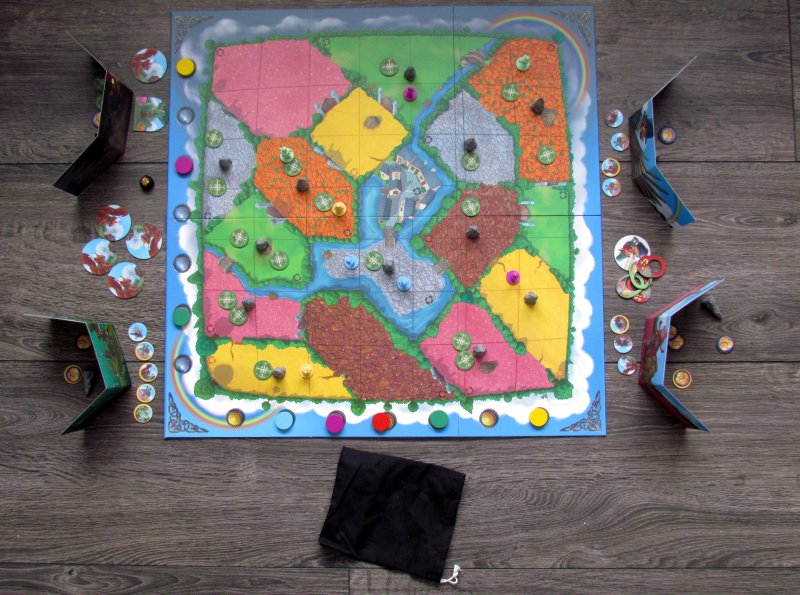 Each player chooses one color for himself and gets only pair of pawns, but also one screen to hide tokens behind it. Now its time to loot a pair of tokens. Players take turns sending their Korrigan (figures) on the board. They can choose any location on the board, look at tokens there and keep one of them. This entire process is repeated twice. Then participants placed all rainbow tokens into the bag and other components are set next to the board, creating supply.

At the beginning of each round, it is necessary to pull one rainbow token out. They are gradually working in joint effort lead playrs to location of the cauldron. Depending on whether color was drawn for the first or second time, big token is placed on either sun or cloud space. Choosing specific row/column is up to the player. From the beginning, players like this clarify bit after bit position, where pile of gold will appear in the end.

But before that happens, it takes few rounds. In them, player always has option to move one of his korrigans and this with help of an assistant. This creature was chosen by each player at the beginning of the game (remember choosing tokens from the board?). Each of the animals (six species) has the opportunity to move differently, some very location-specific, such as a mouse walks over bridge or squirrel slips through the door). 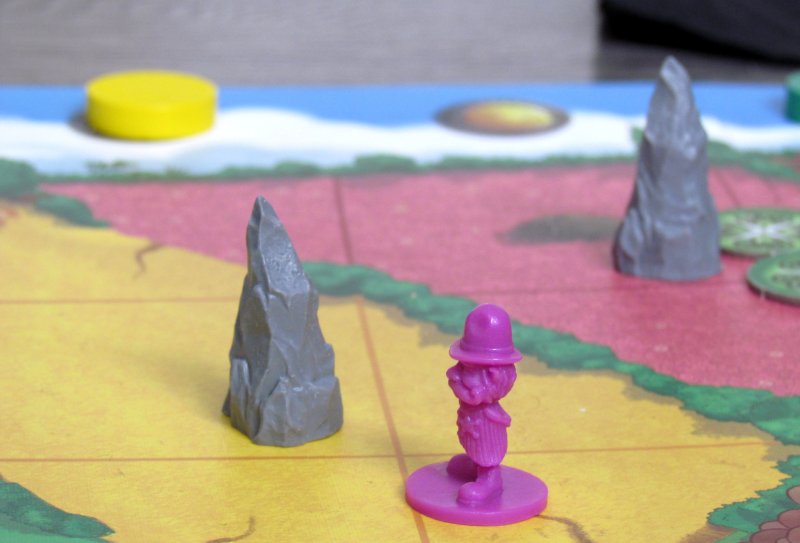 At the beginning of the game, player has only one companion and its token must he reveal, placing it visibly in front of his screen. Since it, player can use him anytime until the end of the game. From the position, where his elf newly arrived, can player choose one new token and hide it behind his screen. That player may again inspect all tokens lying there and choose the one, that suits him the best. In addition to new companion, tokens can bring him also gold. Coins are used as victory points are will be important at the end of the game.

Whenever a player picks up last token from one field, he gets menhir as well. At that moment, he may simultaneously exploit ability, that is printed on sticker on its bottom. This time, there are different characters (for example troll, fairy or goblin), who can allow more movement, blocked a bridge with a troll or steal gold coins.

Once players should cover up last sun and thus seventh colors of rainbow, this is the time for the pot to appear somewhere on the board. Token is not placed on the last sun, but instead players set it aside and simply draw an imaginary line through both sides of this column, in which gold may appear. But places available are only those locations, where it intersects with empty (unoccupied) rows coming from clouds. As these lines intersect, they create boundaries and mark all locations (at least partially inside the rectangle), where pot can appear. Now it all depends only on decision of the player, in which of these places will be the gold really placed. 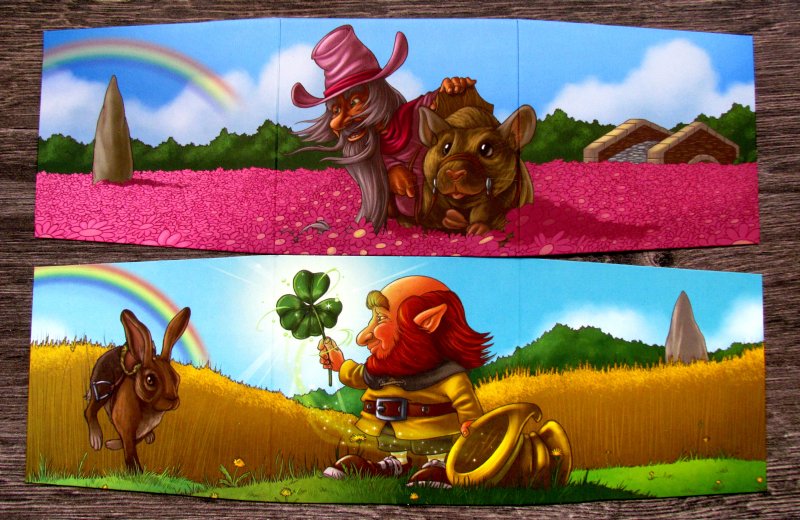 It’s time for the final round. Players can now use all his companions at the same time. Task for all participants is to arrive on place with cauldron, possibly with both of his elves. Each companion can contribute to that success only once during this final round. Players have acquired lots of gold during match plus they can receive another ten (one Korrigan on pot position) or fifteen (both) coins. Player with the highest point gain is the winner and can celebrate under the rainbow.

Korrigans is a game, that can make you happy and put a smile on faces of even biggest spoilsports. It works so fabulously and looks so good from the first moment you look at it. But it also plays very smoothly, because despite its apparent size and component count, it does not include any pitfalls or complex rules.

The most difficult to explain is how the actual location of the cauldron is decided. Players are actually laying rainbow tokens and block these coordinates (rows and columns), where rainbows cannot appear. At the same time, each participant also has to cleverly maneuver with his pieces, so that he is in the best position possible at the moment, when gold coins really appear at foot of the colored miracle. 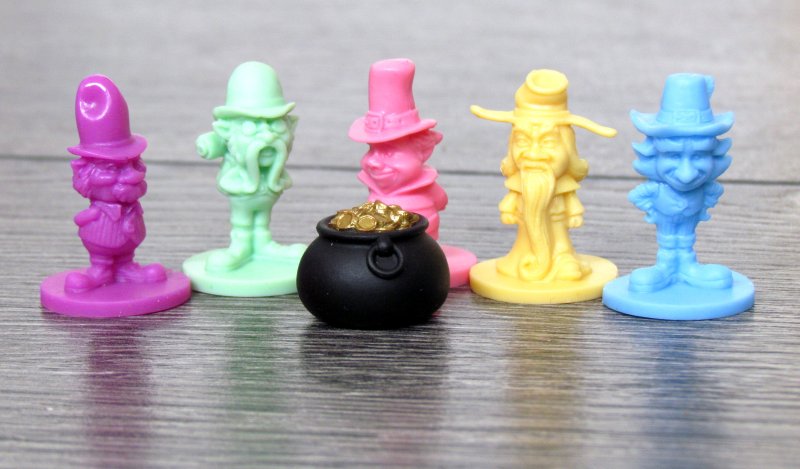 Otherwise, it is actually only a game of picking up tokens, collecting them and moving the piece towards next best location. Nothing more is wanted from the players and it makes it extremely accessible entertainment. There are of course different abilities of assistants and special actions of menhirs can seem too much, but everything can be solved only at the moment, when it occurs by looking into the rulebook. Until then, gameplay Korrigans is absolutely pure and undisturbed. This suitability for families and children is brought to perfection by beginner side of the board, which even has silhouettes of animals drawn between different locations, which are needed to move between them.

Through it all, players can actually have their final situation under control. Even randomly distributed tokens from the start are in greater numbers, so player can always choose and does not have to surrender to mercy of chance. Good luck is the most important at the moment, when cauldron appears, because it may be too early, when not enough cloudy rows are occupied. Thanks to this, it could not be possible to clearly determine the location of the gold coins.

Important role in the game is also played by optimization. You have to know, how to decide, when to choose new companion and when to switch to collecting gold coins. As a result, players will fight for tokens, but the real race comes down to the very end of the game, when last turn is really moment of truth. Interesting and full of tension, whether players are able to get their pieces to finish or not. 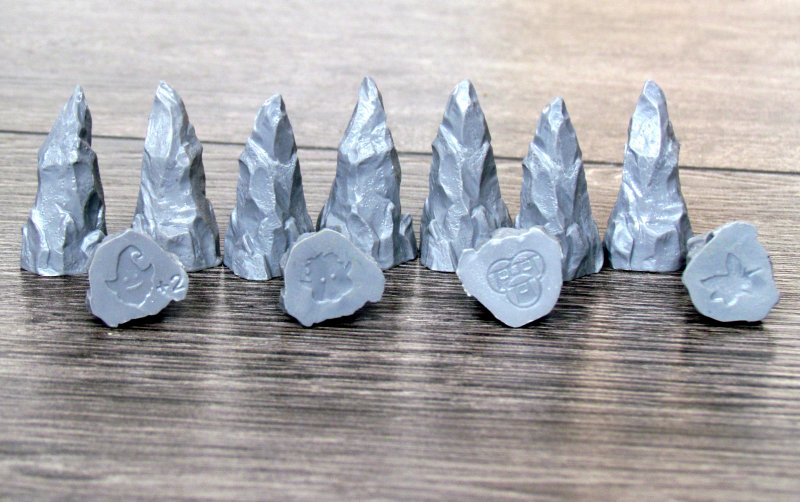 Korrigans is a game, that can totally disarm anyone, who looks at it with its appearance. It looks extremely cute and colorful. And combined with simplicity of rules, we could perhaps compare it only to our beloved Takenoko. Korrigans is another great game for beginners, which can be enjoyed by all.

Overall, game lasts only some twenty to thirty minutes, depending on how exactly tokens of rainbow are drawn. Fun is better with larger number of players, because two can not enjoy it that much. All mechanisms and treasure hunt is directed for a filled board. But its still pretty playable with two as well.

Korrigans, for some unknown reason, have not earned more interest among players. Maybe because game is clearly aimed at families, especially children. If you looked at the surrounding images, we do not even have to emphasize, that children will love this game from the first moment. It does not offer difficult choices, but maybe that’s, why it deserves a place in many collections. If only as a recreational pastime. This is the truth about Korrigans.

Korrigans is an amazing game for families with children. Advanced players may not necessarily like, what they find, because despite relatively large degree of control, match includes significant influence luck possibly ending the game sooner. Game offers a reasonable period of time to be completed, in which players run around board with their elves, but at the same time are also trying to set out position for rainbow appearance. Only a person, who's elves can move to pot of gold, gets serious amount of coins and chance to win. Korrigans is a game in rich colors and experiences for families (with children).