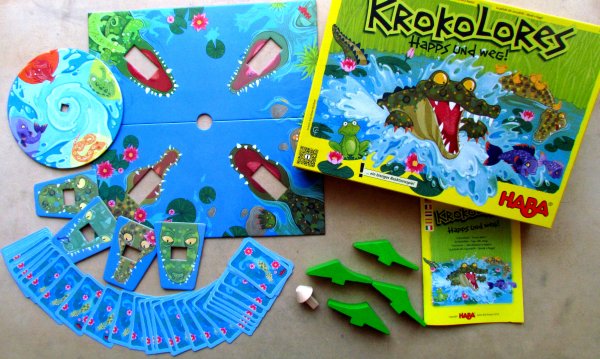 Like my sister, I also have happily swam in the river. But then I suddenly heard a clicking sound and all the light disappeared. I found myself in a cave full of white stones. Before I realized, that this is mouth of a crocodile, it was already too late. On a roller coaster, I was headed into its eternally hungry belly. Watch out for these green predators, so you do not meet the same destiny!

We players can become one of these green hungry creatures in game Krokolores. The author of this children entertainment is Anja Dreier-Brückner and beautiful illustrations of entire inside of the box was embellished by Christine Faust. Game was published under logo of HABA company as a novelty for year 2014.

Yellow box shows us one of the crocodiles on the prowl. All animals are quickly dodging in front of him as they try to rescue themselves at the last minute. Lid opens as a toothless mouth and you discover interesting gaming components inside. Firstly, there are four crocodile heads. At first glance, you probably can not tell, because you may need to build them from green wood jaw and cardboard head. It has a hole in its nose, exactly matching jaw and easily connecting them into one whole. 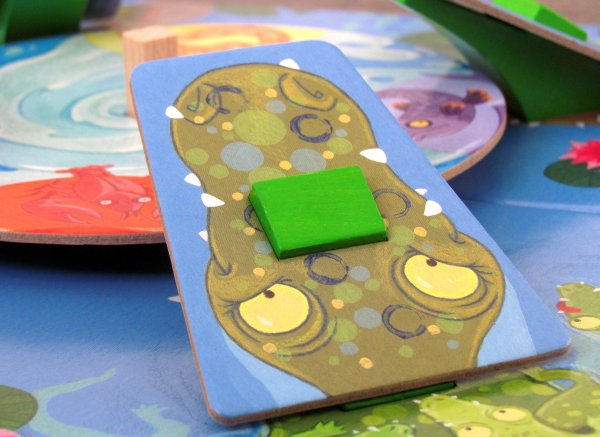 These four heads are added to two-part game board. It shows environment of slowly flowing river as a rotating board, which has all four possible prey – crabs, snakes, frogs and purple fish. The same animals are also located on 36 cards, but there are always animals in numerous different groups. The last wooden tile is one rack.

Now all you have to do it connect it all together, so you can play. Lower part of the board is placed on table. Wooden tip of rack has its place specified exactly in the center of the board and makes a rotating board. Players then each choose one crocodile, complete it and push his jaw down into hole in the lower part. Then simply reveal first three cards from shuffled deck.This creates a menu for the first rounds.

Players are in every round trying to get the best catch possible for them. One of rivals starts spinning of circle with catch and then verbally players start their joint rounds. Everyone plays together and is trying to stop rotation by snapping jaws onto moving circle. This has to be done in a way, that in the mouth of a crocodile stays as valuable catch as possible. Each player, whose crocodile head touches one of the critters can get all cards of that animal, if it is available in the offer. 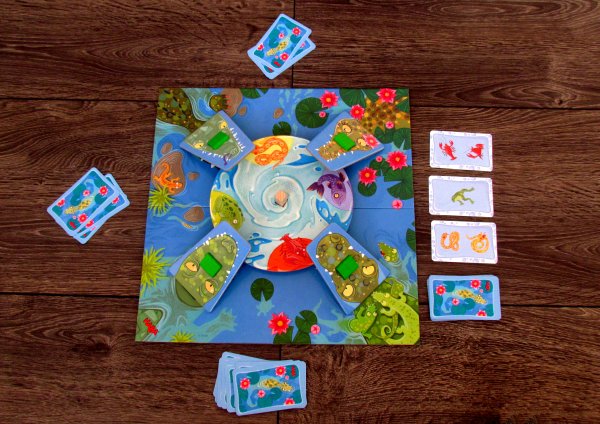 Supply of cards is again completed back to four, prey in pool water starts to spin by force from next player in line. Hunting may start anew. The game continues until supply of cards runs out. In the end, players count total number of catches on their cards and less hungry crocodile is the winner.

Krokolores does not offer anything, that might surprise you somehow. The game is clearly aimed at the very smallest players. It helps to train them reflexes, judgment and speed. Spinning wheel with goodies has to be stopped at the right place.

Unfortunately, it can be stopped only by one player – the fastest one. All others get, what they currently have in their reach. It can very easily come to frustration, because only the fastest hand wins. A lack of any chance to influence does not do the game well. Children were sometimes frustrated, when playing a game, because mechanism does not work as well as we imagined according to the rules. 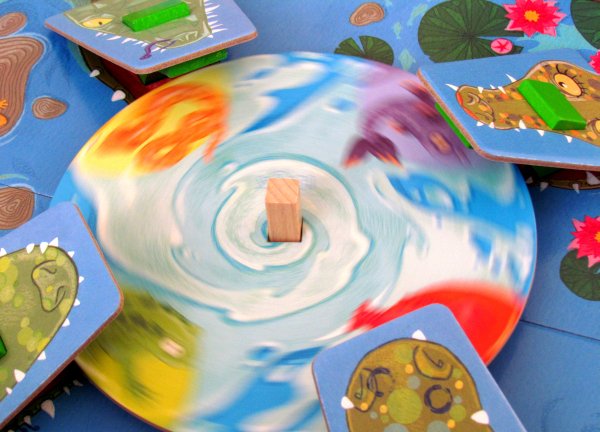 Game is not something extremely funny, but still works as a improvement tool. Children will not laugh very much, when playing as they are starting and stopping rotation for the whole match. Game does not give you enough time to enjoy the rotation, which is the main enticement of this game.

Krokolores biggest weapon is processing. Massive and beautifully painted cardboard tiles, wooden pieces and illustrations on the cards (which are a bit too thin). Neither the manual contains anything complicated and at the end, you will find another variant for smaller children. This does not take into account number of catches on the card, but only quantity of the cards themselves. 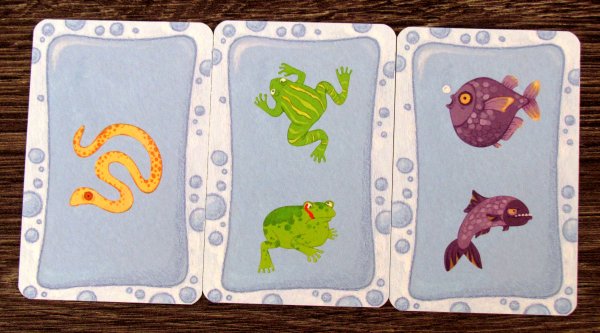 Krokolores is an interesting attempt for short action children´s game, but its not as successful as it could be. Maybe it needed a little different rules or mechanisms. But maybe you have an idea, because with so nice components, all crocodiles in the world could definitely experience many interesting adventures. According to the basic rules, Krokolores are not so much fun.

- missing some fun
- each round, only one player clicks
- stereotype