The long awaited performance should be held this evening. But La Carlotta locked herself in her room and refuses to appear for rehearsal. She’s afraid to come out and I do not blame her. Mysteries happen in the opera house ever since her arrival. After the last incident, we sealed the building and eight suspects remained trapped inside. One of them must be carrying a mask and a red jacket. The man, who calls himself The Phantom of the Opera. But how to discover his true identity?

Now this is the story behind board game Le Fantome de l’Opera, which came to us from Hurrican Games publisher. Its parents are Bruno Cathala and Ludovic Maublanc, who are also behind many other popular games. Their expected new opus was published in 2013 and illustrated Jean-Marie Ninguez.

Box shows us Opera House and the Phantom hungrily reaching his hand for the singer. And we also find out, that the game uses a proven system of older Mr. Jack game (same publisher). It is unavailable for some time so none of us had a chance to play it and the more curious we were on this reissue with another theme. 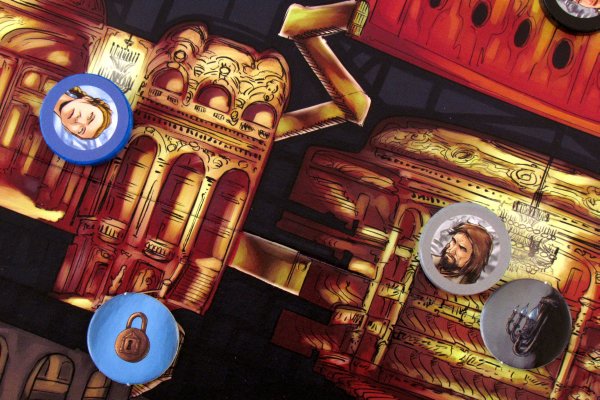 Inside smaller box, there is game board lying below rulebook, showing the entire opera house from the basement, through the foyer and warehouses up into hiding under the dome. Individual rooms are connected by corridors, which may be secret (distinguished by pink color). At any of these places, mysterious stranger can be hiding. At the bottom of this board, you will find a staircase, on which La Carlotta runs away from the opera. If she manages to come out of the entrance door before players reveal identity of this offender, her performance gets cancelled and nobody will ever know, who this phantom really is.

But although it looks otherwise, players do not play together. Instead, one becomes an investigator and a second phantom himself. This game is not intended for more opponents than this and players do not have any connection to cards. Eight of them are representuing characters with an icon describing their special abilities. Portraits of those same people can be found once again, but this time with their alibi. To these eight cards also (judging by back of the cards) belongs also other three with phantom.

At the bottom of the box, there are also eight wooden tokens and a sheet of stickers. These should married together forever after, so that there is always one character on both sides – one guilty and the other is cleansed suspicion. There are also three other tokens, one representing Madame La Carlotta, another two blackout and lock. 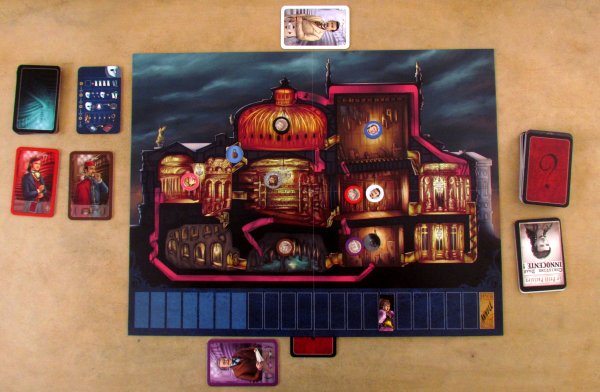 Players start setup by placing one common card, that has printed course of turn – on one side for Phantom, and on the other for inspector. This means, that you must now divide role to one detective and a mystery emblazoned villain. Position of each player at the table is also important.

Characters are then simply spread through the building of the Opera (with suspicion side up) and both other tokens are set into place based on rules. Only when placing opera singer, players can mutualy decide on their ratio of skills, if someone will have an advantage. According to this, they can choose out of seven starting blue boxes – middle one is for balanced play for both rivals. Now you need to shuffle two decks of cards, lay them next to the board. Phantom now draws alibi card from his deck, stealing identity of one character. He slides this card under game board, so Inspector could not see it.

Progress of the game alone is very simple. Every odd round begins and ends by nvestigator turn. Between these two actions, phantom gets his chance to undertake also two actions. Order gets reversed for even-numbered rounds. This means four in total, which corresponds to character cards. Such action always involves selection of one of four characters from cards, which are revealed at start of a round. Active player can move with this suspect on the board of opera. Number of rooms allowed to move is decided by amount of other people present with him inside that location. 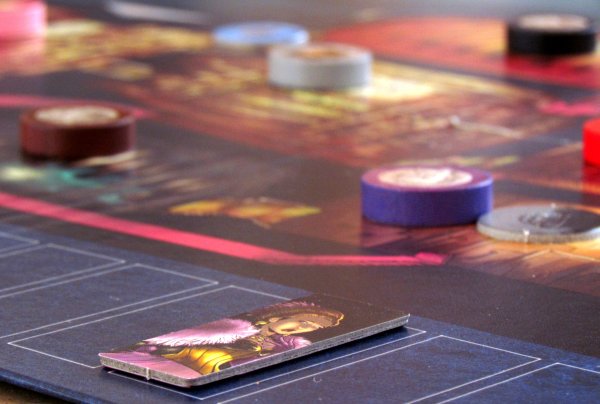 Before or after his turn, player can also use special skill of that particular character. Depending on who activates him, he will help Phantom or investigator. Some characters might therefore get their alibi, but these abilities are especially used to move other characters. Players can manipulate also location of both lock and blackout tokens.

After playing all four movements / actions (two by phantom and two by investigator) is time for Phantom of the opera to try to scare all the visitors. But this event may occur only in the case, that phantom character stands alone in his room. The only exception is location, where blackou token is currently located. In such a position, he will not reveal his identity even by undertaking some scary action.

Investigator can on the basis of phantom performing noise or other stuff learn, that some characters are certainly not guilty. Their tokens are turned with innocent side up (just for better overview), if they are standing in a room with some other character, when phantom appears. These people have alibi and cannot be Phantom anymore. 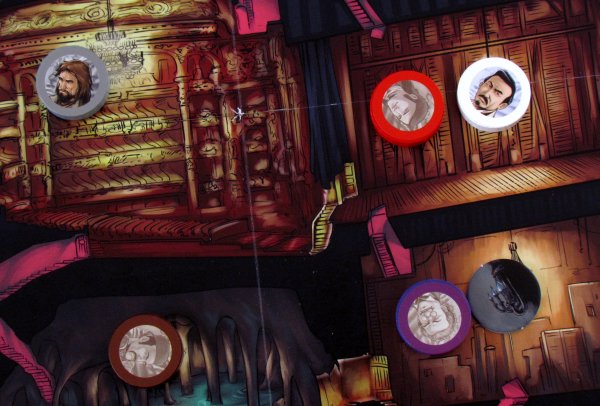 At the end of each round, it is then necessary to evaluate, how much La Carlotta fears for her safety. She runs off the stairs towards the exit by as many fields as there are suspects still present in opera. Next round then takes place in reverse order and help card is turned arount to mark this change. Game continues until one of the sides fails to fulfill the task. Either only one suspect can remain in the game ending in victory of investigator. Or phantom can rejoice, when the singer reaches the exit of the building.

Le Fantome de l’Opera is an interesting game of deduction for two adversaries. Both players have same resources available to expose or conceal their true intentions. But everyone has different goals and tries to perform opposite effect in the round. It is then up to players, how they can benefit from the opportunities game provides.

And here belongs not only basic movement of characters, but also their abilities. You have the power to change the situation in the round and completely reverse chances from one side to the other. The investigator has initially better position, but as number of suspects decreases, it is more difficult to get persons with need for an alibi alone in a room. 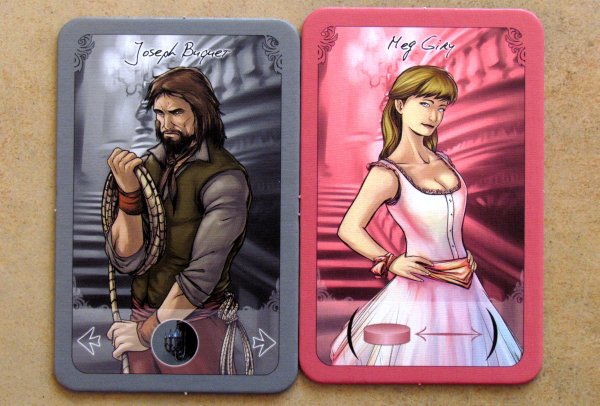 Investigator can only play, what phantom allows him to. There is always a major advantage in having last movement in every turn and that is, why both sides alternate in doing it. Player may use it on a board to turn situation to his advantage. But both players must give their best, because there is surprisingly wide range of options each turn.

Due to the rapid progression of turns and limited decision-making, whole match can fit easily within half an hour. Sometimes its course directly says for retaliation and you probably will not refuse. Game with two is full of struggle for victory and game often ends in close result. Replayability is guaranteed thanks to selection of a sufficient number of characters, so phantom can be someone else every time.

The only complaint we have about the game is a bit bound to game time as well – this game is simply on the easier side of deduction games, but this is compensated by game time. You will not find any complex rules, more pieces or needed surrounding. Simple by moving figures around the board, you have to deduce their identity on the basis of their position. 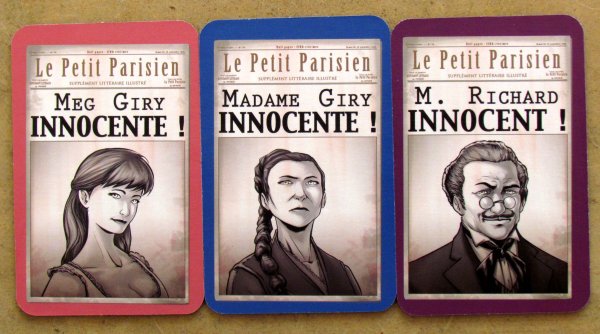 The game is very clear at any time due to double-sided tokens. Both players always know exactly, which character is beyond suspicion and who could still be a phantom. Player in the role of the Phantom could not deceive, because at end of the game, you can simply check that hidden card. If you do not believe the bad guys (which would normally occur probably not), you can even write individual turns and game is therefore reproducible. Overall, however, processing belongs to those well done, including interesting illustrations.

Le Fantome de l’Opera is well done deduction game for two players, who will not even let each other some space. Winner is decided by minor errors or hesitation, which plays in favor of other side. Each of the opponents has a clearly defined goal, which he seeks to achieve simply by moving figures. It is this simple mechanism, that makes the game really accessible, but still fun. Le Fantome de l’Opera is affordable two-player fun for player of all skill levels.

+ difficulty settings for both players (ideal for playing with children)
+ precise processing
+ keep it simple
+ attracts all those, who love deduction
+ fast game time
+ special abilities of characters
+ plenty of strategic options for each turn
+ interaction between players

- there are more sophisticated games of deduction on the market

Le Fantome de l'Opera is a simple game of deduction for two, that can be learned within few minutes. But the strategy needs both adversaries to play carefully each turn. Investigator gradually eliminates suspects, who have alibi, because there was someone in the room, when the phantom appeared. On the other hand, player in the role of a mysterious masked man is trying to make identifiaction as difficult as possible and seeks to have as many characters in the room alone as possible. This all is done not only with movement, but also using special abilities of characters. Players have to cleverly use all of these options and manipulate their opponent towards own victory. The game is very fun and offers a great quick game for two opponents. In addition, it looks very good. Game time is reflected in the modesty of the game, which may entice some players to other, more complex deduction game. However, Le Fantome de l'Opera deserves attention, because it works very well and yet it looks good.