Review: Leonardo and all his inventions

by Dušan on 17. 11. 2014
0
previous article
Review: Le Fantome de l'Opera - Phantom of the Opera on stage
next article
Review: Concordia - rebuilding land after the war
Contents 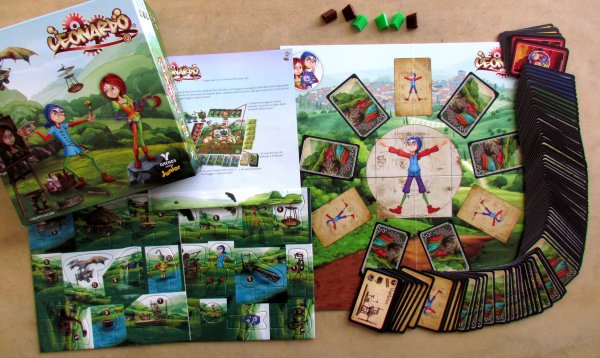 I remember Mona Lisa well. When I last saw her, she wanted to rebuild some of my inventions by herself. Stubborn little lady. She says she’s as good at designing machines as me. I sent her a message through a remote-controlled swallow. I challenged her to a duel. And when she loses, I, Leonardo Da Vinci, will finally be able to draw her portrait I am trying so long to do.

We may use all inventions of this famous man thanks to Leonardo board game from Ghenos Games, which belongs to Junior edition. Game itself was released in 2013 as is work of author Charles Chevallier and illustrator Giorgio De Michele.

Even the box itself emits flavor of inventions, that move around the central pair. We are entering the mythical moment, when Leonardo painted Mona Lisa. Although they both look on the cover a little differently, than we know them from history. 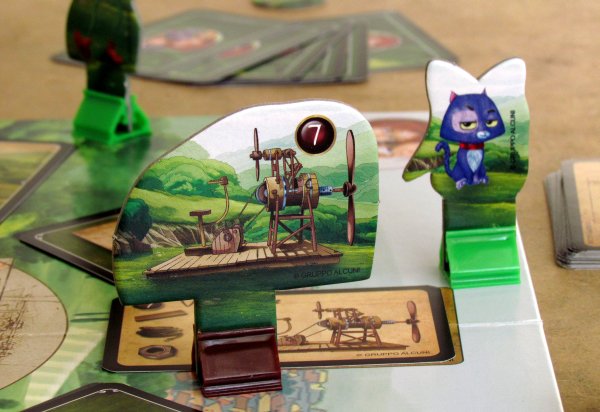 Inside the box for curious small and big players, there is waiting a game board, on which everything is assembled in a circle around the Vitruvius man, a man in the ring. Figure is substituted this time by our young Leonardo and around it, there are nine positions for cards.

A deck of cards is just the next one thing, we will be interested in the box. In addition to the cards of components necessary for inventing (wood, rope or gears), you can also find portraits of inventions (eighteen different ones). Each of them contains a point value, which will be issued as reward for their completion, but also part list needed to build them. Last type of cards is 83 actions, that are not only those components, but also allow players to change course of their turn. Yet there is another 24 cards, six of each color, which will be split among players and are showing heroes of the game together with numbers from one to three.

But to get the cards in our hands, we had to first go through two sheets of cardboard components. Most of them also depict aforementioned Leonardo’s creations. There is eighteen of them and they each have a pad to fit easily into the plastic holder. In same sheets, trio of pieces hides, that can participate in the game – there are Leonardo and Mona, but also their pet – blue cat and also a circular token indicating the starting player. 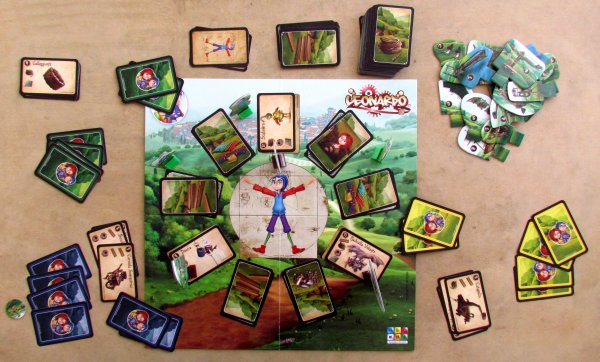 At the start of the game, rivals place game board between themselves and shuffle decks with material and inventions. These cards create two piles. Each of these two types has its fixed location on board. Players then revewal three invention cards and six action cards, placing them into circle. Inventions also need to get their cardboard portraits and put them into the stands nearby card. Players choose a color for them and take correspoinding set of cards. One of them becomes the starting player and gets a token to mark that.

Players then each round use two cards from their hand to create plan for moving one of characters and second card deciding distance to walk. Starting with first player, they can all make their movement. Player then can try to take a card from location, where character stops. It is simple in case there is component or action card, because player simply takes it. In case of invention, he must have sufficient components to pay and only then receive that machine. This brings him immediately victory points.

It happens very often, that some players plan to move the same pawn. In this case, current order of the players decides, who will act first. Position of starting player changes each round. Current player passes token to his neighbour, they all take played cards back and can again use them to plan next movement and turn. 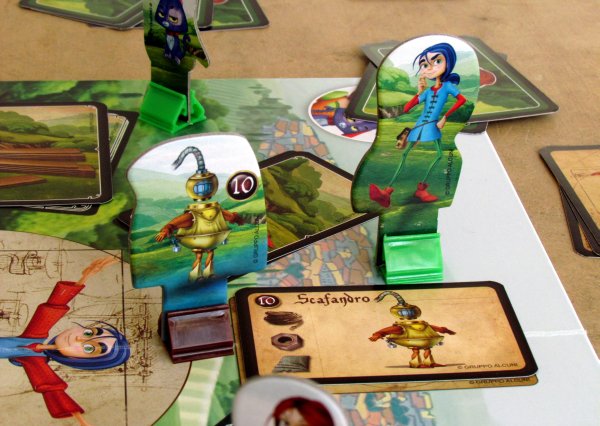 Game goes around, hunting for raw materials and creating inventions until one of those two piles is emptied. At this moment, players quit rivalry and add points gained for invention cards. Player with the highest points count is the winner.

Leonardo fits perfectly into that junior category. It’s a really simple game, which presents children with interesting challenges. They like to play it and this goes also for their parents, who can complete inventions with them. But as such, of course, it can never pleases experienced player.

Placing cards on the circle is random, so players can often wait for a very long time to get some type of raw materials. But their chances are common. Yet, this does not apply to planning, where everybody is always trying to avoid characters, which will be moved by opponents.When someone else moves your piece before, he will thwart scheduled plans and you end up elsewhere. This often leads to unwanted surprise, although at the same time creating the most exciting phase of the whole match. And sometimes, you even want to have same figure selected, when you are in role of first player! 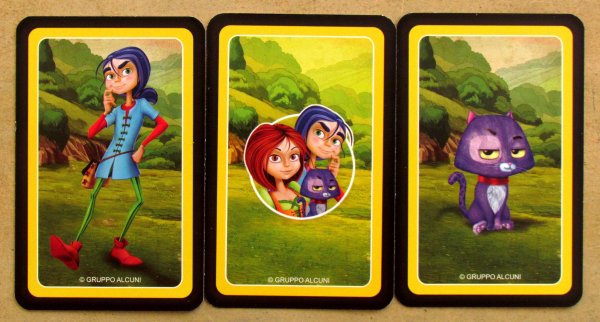 Game is, of course, also affected by the action cards, that allow you to play the second turn at once or steal any component card from your rival. If you have a smaller child, it is good to play without these actions cards, because they can be nasty. In the opposite case, they add nice portion of hostility to the game and allow players to get even cards, that they did not manage to pick up.

Rest of the game is purely about walking around and collecting suitable material. There is not so much fun hiding, but just common planning makes kids happy and distinguishes this game from others for this audience. They feel some control over the game.

Game has clearly set time limit, which is the same in all numbers. And because of it, it takes always those declared thirty minutes. And even they might seem too long sometimes, game could end somewhere aroung 20 minutes and that would be perfect. Experience, however, varies according to the number of players, because while with two and three participants, each rival has chance to gets his own piece, with four players, two will always have to share. Game is also much more hectic and unpredictable in more players, because the pieces are constantly shifting. 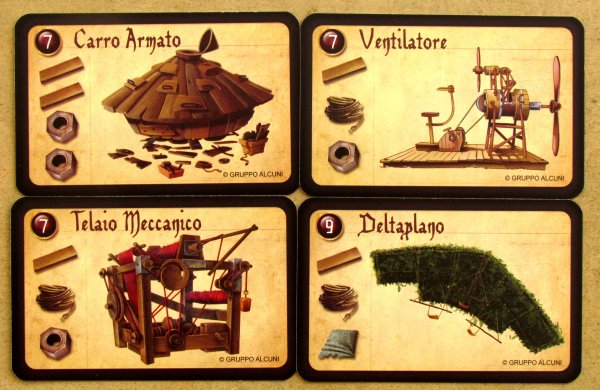 Tracking player order is the biggest issue of this game. Even adults have problem remembering to pass first player token every round to their neighbour. Let alone children, who are immersed in the game. Unnecessary quarrels can then arise, because the order is absolutely crucial in this game.

Graphics is adapted to children’s theme. Main characters were changed to children and all the illustrations inside are nice and playful. The actual pieces of inventions have difficult role, because their existence is not actually needed. Their pieces are just there for decoration and players must constantly change them in base, whose number is limited to three. Risk of their damage rises with every slide into plastic stand. In addition, card locations on the board are poorly designed, because they have the same graphics as card back. Often, you simply do not know, whether is there a card lying or you need to add one. 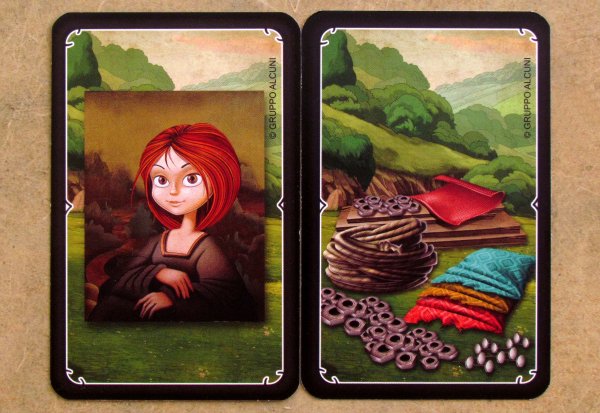 Leonardo works well in the target group for which it is intended. Children like graphics, inventions and simple gameplay. But it is nothing else, than waiting for planning of a choice of cards in each round. Leonardo and this game offers some fun to families with children.

Leonardo is a game, that will appeal to small inventors. Children will have fun playing, but the game is too simple for at least somewhat experienced players. Players are moving pieces around a circular path, collecting tiles and creating inventions out of them. To do all this, they need a good judgement and luck, because their intention can be thwarted by rival, who wants to move the same piece. And when he gets to turn sooner, than you, he may completely spoil position and your whole turn. But it is not easy to keep track of who really is the starting player, because this role changes every round. Invention tokens are also completely useless. Game looks nice thanks to them, but they do not provide any true benefit. Leonardo is a game for children, and it works well as that, when playing. Children like inventing and that's probably the main thing.