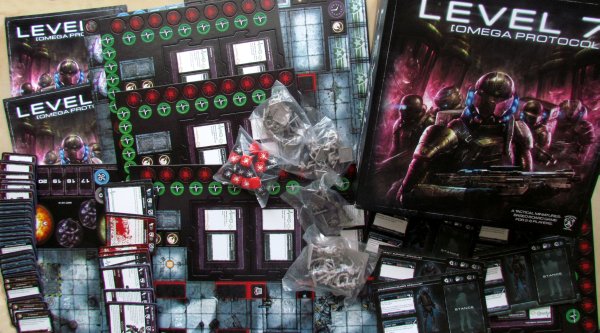 Even now, I remember the scene, when we arrived at the Subterra Bravo. Our SWAT team got there first, and we saw people jut out. They had terror in their eyes and some of them were badly torn. One man ran up to me and gave me a hand, which he held in his arms like a baby. It was not his, but I did not have the strength to ask him, who did it belong to. Silently, I took it away from him and watched as confusion goes on. What the hell can we expect inside?

The proper atmosphere for now abandoned station, where they have carried out, who knows what experiments, is waiting for us in the board game LEVEL 7 [OMEGA PROTOCOL], which builds on the previous game LEVEL 7 [ESCAPE]. But only with story. Its author is again (as in the previous game) Will Schoonover and published it under flag of Privateer Press.

The entire game is located in large box crammed with different horror components. The most important are of course large cardboard pieces, whose composition will bring station map to life. Whole building will be divided into squares, on which heroes will move. Large tiles are complemented by smaller ones indicating doors, narrow corridors and even special features on the map. Over this all, your nice miniatures will move, representing not only the commandos, but also their fatal enemies. Your sight is then immediately drawn to connecting cardboard puzzle pieces, that will be used for raising new monsters in the Subterra Bravo. 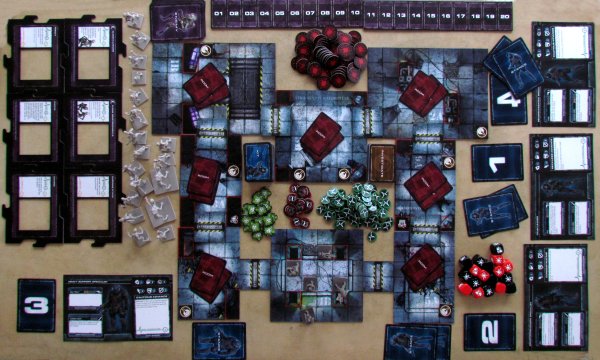 Each hero also has his own card, that shows his current statistics during the game. The most important thing in the game is adrenaline and health, but also stance represented by cards. There is of course much more tokesn available for play and they also show injury, adrenaline, time or keys. Likewise, card deck still includes enemy stats, description of equipment or rooms. Most of them are wearing a particular text description and a few icons describing capabilities. Exception goes for monsters, who also have lives, speed, defense and ability. And since there is fighting, there is always place for dice and LEVEL 7 is no exception.

Beginning of every game is the same, but inherently different. Game is governed by a nine prepared missions, each of which has specific setup and tasks for both sides. First, you must choose sides. One player becomes evil Overseer and everyone else selects heroes. Number of used miniatures on good side will vary according to the number of players participating in the game.

After that, play set tiles and prepare a map with an entry for the unit in accordance with the instructions, including investigate tokens spread around the station. Beside it, players then put all the piles of tokens and also shuffled decks of investigate cards. Nearby map should also be placed cardboard turn counter. Each room also gets its own deck of cards, chosen by guidelines for the scenario and also by Overseer. 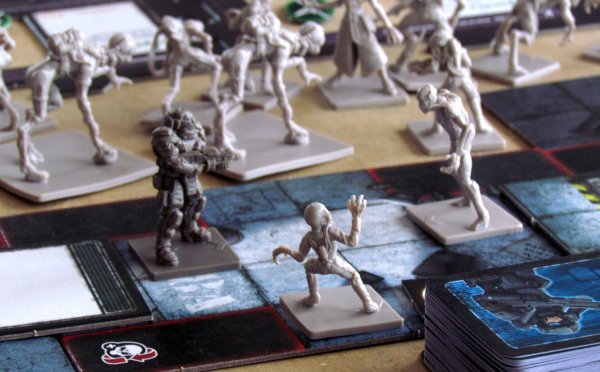 Heroes will then place their character board in front of them (with printed default melee and ranged weapons), two sets of cards (equipment and stance) and also a miniature, that is prepared to enter the station entrance right away. Now you need to choose equipment for the mission from character’s inventory and it can be worth a total of six points. Overseer also prepares his combat plate (dashboard) according to instructions of given mission, connecting puzzle tiles, which will allow him to take actions. He may then spread door tokens around the board at his discretion (they may have special effects) and gets few adrenaline tokens to start with.

Players alternate in the role of commandos in a fixed order according to rank and only after them goes action to Overseer. The game is all about adrenaline. At the beginning of each round, heroes pass produced tokens of adrenaline to their enemy, who can use them later on. They can then choose new stance, that will determine their statistics for the round.

All heroes are gradually able to move, open doors, attack, heal or even explore their surroundings. In each action, heroes body produces adrenaline, that can be taken out of the bank. This is how the players themselves choose, how many actions does master of station get. 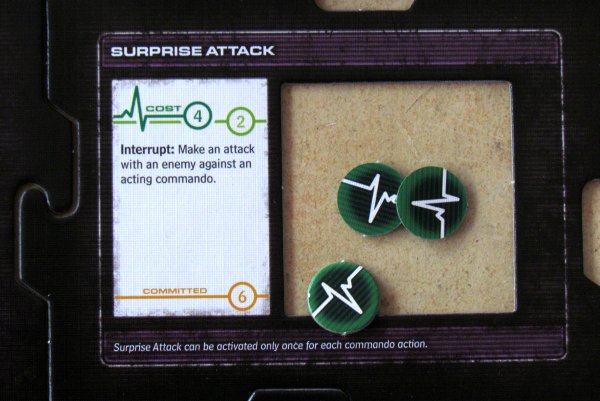 Everything then proceeds as usual. Characters move across levels by spending one point, while some worse terrains cost more adrenaline to move on. If enemy is in sight, they can use their offensive weapons and attempt to injure him. They will use dice according to weapon card. To strike a hit, they must reach beyond defense of the target to inflict some damage. Conversely they may be also injured by monsters and to such an extent, that they become downed. At that moment, they are able to move, but not to help their comrades. But all it takes for monsters to kill hero for good is one more shot.

Very interesting is the concept of closed rooms. Heroes do not know, what Overseer prepared for them, as always. But after opening the door, they directly activates their action (on tile), but mainly all room cards located inside are evaluated. They reveal contents of the room, whether it is a poisonous cloud or monsters.

Then Overseer gets his chance to speak and play. He may use adrenaline tokens received from visitors to the station. But he always has a minimum, which he obtains regardless of the actions of his rivals. Now using these tokens results in activating his abilities. These include of course monster movement, attacking, but also other delicious meals, like creatures taking advantage of station’s ventilation shafts. 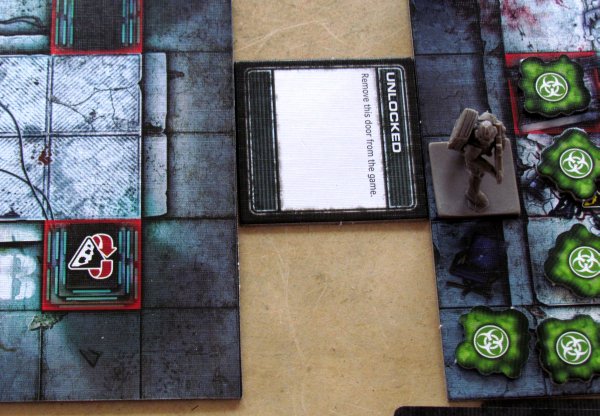 Each scenario has its firmly set rules. These include tasks for both warring parties. Only after task is fulfilled, mission ends. But we must not forget to mention, that human mission has a time limit, which makes heroes always push forward.The conclusion can end either with a success or heroes loss and domination of a single defender and player in one person – Overseer.

LEVEL 7 [OMEGA PROTOCOL] is actually inherently classic dungeon crawling, a game in which the player move along a dungeon and fight monsters, which hide in there. On the other side of the curtain than heroes stands an Overseer (dungeon master), which has monsters under his control and his winning conditions are completely different.

Fortunately, this new sci-fi horror game brings enough news to the genre enough to get players interested in an instant. Even those, who already have the experience from other games, necessary to descent down into the station. The greatest incentive is adrenaline. Overseer does not have a fixed number of actions, but instead all his options depend on the activity of heroes. The more they move and take actions in the round, the more energy flows to his stock. Yet it is not possible to practice a delaying tactic, because there is a minimum amount.

The game is extended perfectly also by stances. Before each round, players can choose their tactics and thereby affect their abilites. Is should probably stand for real concentration in combination with some attacking or defending posture.

Actual rulebook is conceived very unusual (and well). Actual area titled Playing the Game can be found on eighteenth side, but after reading through to it, you will already know most of the major concepts and only connect them. It is also clear, that the game is not easy, whether when learning the rules or teaching it to other teammates. It contains a number of minor details, which have to be remembered.

The game also includes a variety of other small gadgets, that will please you. Among them are the necessary keys or tasks. Yet the basic concepts of combat, movement and surveillance remain the same, as players are used to. The game is therefore very accessible for experienced players. 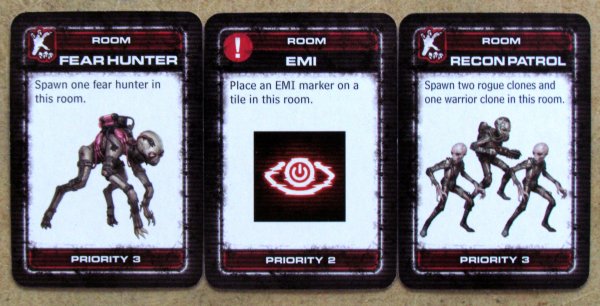 Overseer role is interesting. The player has a huge power, especially at the beginning of the game, because he can deploy any door of the station. At the same time, he also separates and places cards for rooms. Rooms themselves are very interesting idea to solve fog of war and ensure, that players do not know in advance about all objects on the station. Unfortunately, villain role is not as fun as it could be and most players found much funnier position of heroes. Someone will have to sacrifice for fun of others.

Game has overwhelming and oppressive atmosphere, which is because of all those different and thematic scenarios. Length of the game varies according to individual missions, but you hardly have a chance to get to sixty minutes.

There is reall difficult to find any flaws on the game (with the exception of that Overseer role). There is perhaps only longer and more challenging game preparation and processing of cardboard components, that might be a hair better. But it certainly is not as significant obstacle, because you’ll find a flood of components in the box, so you will be satisfied anyway. The actual graphics is high-quality and supports atmosphere throughout the game. 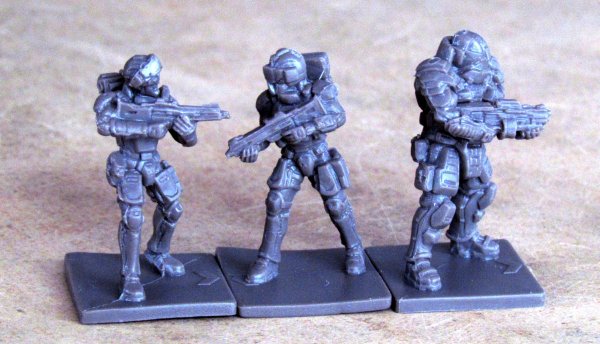 It makes no sense to disguise it any longer. LEVEL 7 [OMEGA PROTOCOL] really entertained us and some of us were even excited. Until recently, there was a great shortage of similar sci-fi games and only now starting to really grow in numbers. And this game will be in the forefront of those pioneers, because it deserves it. It offers a great new experience for all, who want to adventure with two conflicting sides. LEVEL 7 [OMEGA PROTOCOL] should belong to the basic requirements of any sci-fi fan.

LEVEL 7 [OMEGA PROTOCOL] is an excellent game, that hits the fans of sci-fi as they probably did not expect. It is fun and offers a great atmosphere. It's all waiting for them, but primarily in the role of a hero, because position of defender station – Overseer - is not as much fun. It's all compensated by common experience. The game contains an amazing mechanism of adrenaline, which is produced by players and creates action points for dungeon master. There is enough missions in the game, that are always directed by Overseer, because he has opportunity to prepare everything to his liking at beginning of each match. Game takes considerably longer and with more players, there will also be some waiting time between turns. Everyone can think in the meantime, what stance will he choose for his hero to make best use of his capabilities for current needs. LEVEL 7 [OMEGA PROTOCOL] is not completely perfect game, but remains in excellent section, which in combination with a sci-fi theme means: automatic purchase.