Review: Limes – Roman frontier in need of a leader 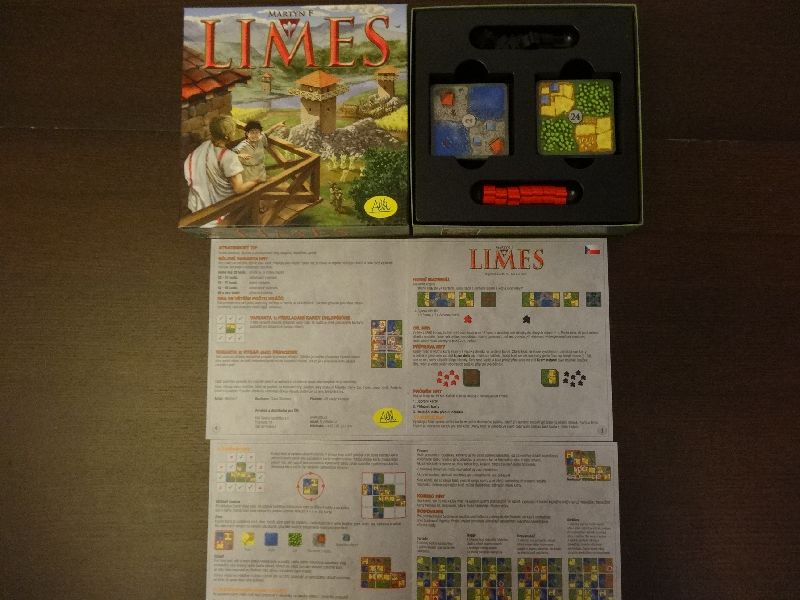 Who will do the job better for upcoming 20 minutes in completely identical conditions? Who is better at systematically building his frontier region and who will protect his people better? Your frontier province must of course be independent and prosper. Would you prefer foresters, fishermen and stone towers over guards?

Limes is a small strategy game with little chance and minimal interactions. Game for one to two players from Dutch designer Martyn F. is sequel to the original game from 2008. It was called Cities back then and comes now in a new disguise and with truly balanced gameplay. It was published in 2014 by Abacusspiele.

Small box is filled with even less material, but provides a lot of fun on the road and we think it will please every player. Its advantages are simple rules, game system based on the principle of Carcassonne (connecting tiles and placing pawns), short playing time and also complete absence of damage, including interactions. In this game, everyone drives in completely separate lanes and that is why it’s also a great solitaire game. 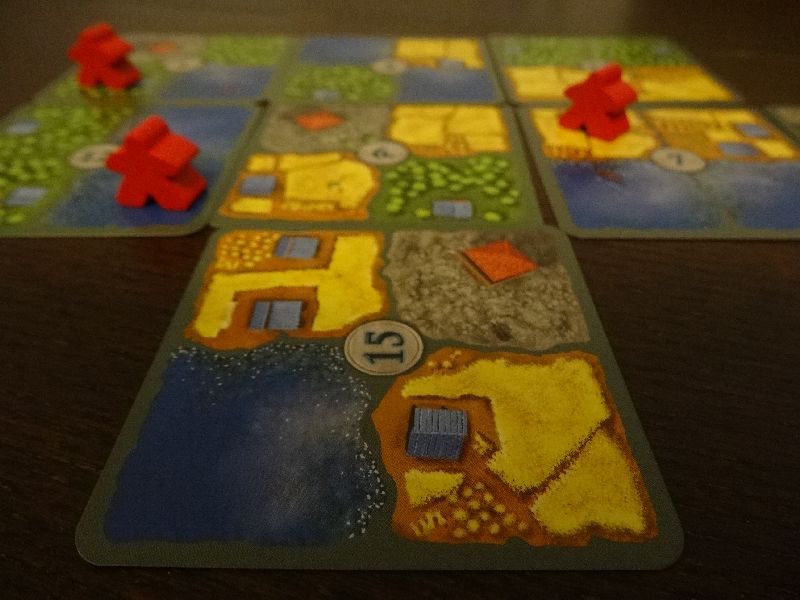 As mentioned before, there are only rules, fourteen meeples and two times the same set of 24 square tiles. These are divided into four zones, which represent a combination of four territory types. Lakes, fields, forests and mountains with watchtowers. Combination of these surfaces is the same for both players and game conditions are identical for both players.

Game consists of 16 rounds, in which each plays a tile(so third of them will not be used in current match and promotes variability in future games). Player can either attach a piece or move previously placed one. Cards have printed small numbers, which are unique and pair tiles across player sets.

That means, when one player draws a tile with number fourteen, second player finds the apropriate tile in his package and each connects it to build their own empire. Game ends at the moment, when 16th turn is finished by placing last piece. Estate of each player has to be a square shape with a size of four by four. Because of this, nobody knows at the beginning, whether his first card is creating middle, north, south or side of his province. Each player therefore can shape his board differently, although they are both using the same tiles in same order. And there is no cheating/luck involved too. Cards can also be rotated differently, thus there is no lack of possibilities. 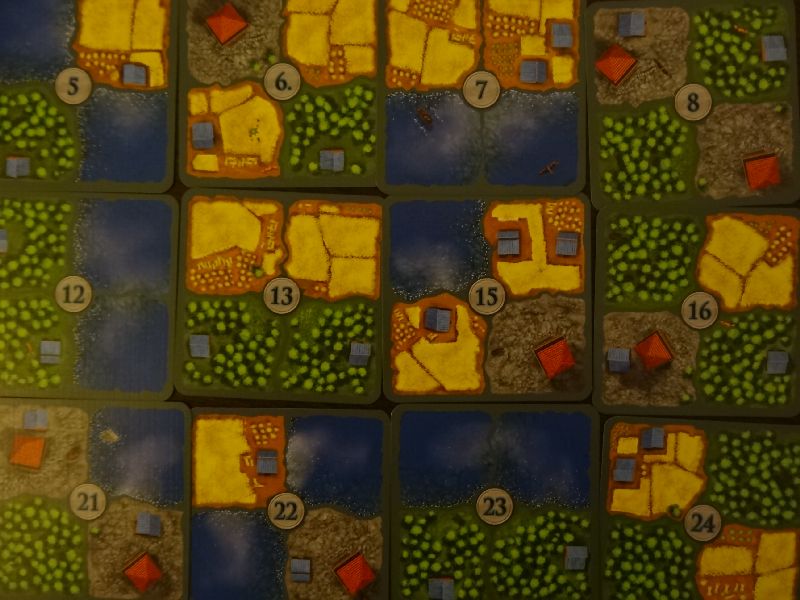 In my opinion, the real shame is fact, that you will soon stop being interested in second player’s choices. You will not care, which direction his empire develops, because you can not affect it in any way. Faster and more experienced players can be now saying, why not play the game by yourself to begin with. They are right. But on the other hand, it is interesting to see a totally fair comparison, when conditions are completely the same. It all depends in the end on who will deal with the game better in the process. Final point difference is minimal.

In addition to applying appropriate tile, which itself requires a lot of planning and complete oversight over your land, it is crucial to properly occupy your area (= same contiguous zone) with your tiny Romans. They will be the ones, who will decide about end points and thus also about winner. You can find a similar principle in the game The Little Prince: Make Me a Planet, which is more interactive, but also more random. And strategically oriented players may not get over those “notches”.

Identity of your pawn at the end of game is decided by field, where he stands. You have a farmer, giving you as many points as big (how many zones) your field area is. Fishermen on the lakes are again scored according to number of fishing huts near shore (these cabins are on all types of surfaces). In contrast, lumberjack requires diversity nearby his forest and hence gives points for each different area (not zone), which is adjacent to the forest. Very important are guards, which can see from their position on mountain areas both ways – vertically and horizontally all the way to other rock tower. All forests tiles in all four directions bring points. This makes forests truly important, because they can be used twice for scoring. Key role play also a few other tiles, that have two different landscapes, but that is no surprise for you, is it? 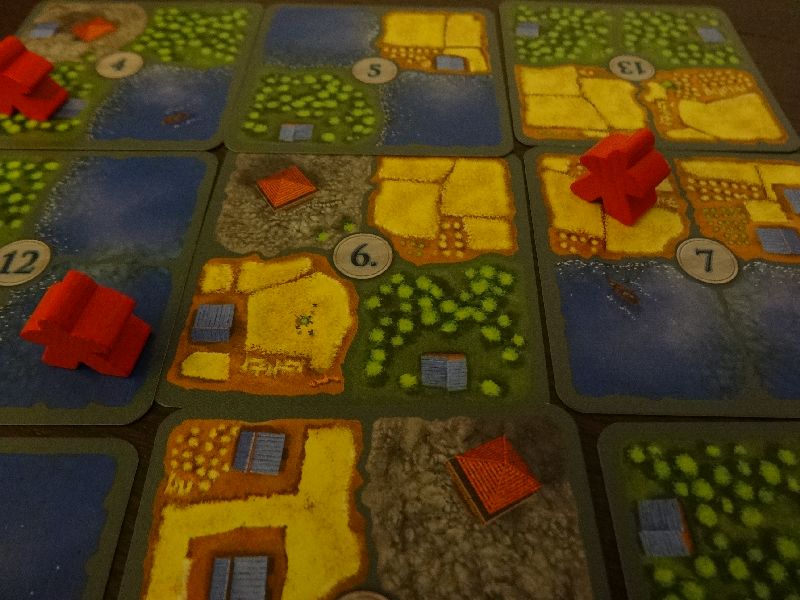 Since it is not possible to have only farmers or fishermen (it is possible to make two large field areas), you have to concentrate your efforts on a wide range of occupations and their combined scoring. Out of the seven workers, you will most likely have guards and each of them should score a minimum of 5 points, but rather more at the end of the game. Some will add only four points, while other better positioned in relation to good terrain can guarantee even 10 or more.

All in all, Limes has great variability. It can be played in 15 minutes and it is perfect for solitary players. Game is perfectly portable, has no elements of chance and is great for weighed duel of two rivals. Simple rules come with already verified principle of the game by many games in the past. This new one has a very balanced feel and appealing graphics. In addition to this all, Martyn F has published additional game versions on his website, with perhaps even more comprehensive rules for the game. Although the material is scarce, but you have to pay even for intangible quality. I have long looked forward to playing this game and it did not disappoint me at all. Everyone liked it and it is ideal for both amateurs and advanced players to fill a half-hour for gathering in two.

This is true modern game, whose main drawback is zero interactivity. From the third round, I have not really know, what the others are building and actually I did not even care. If there was at least a little bit of influence over other player in the course of the game, it would be great. Even if was only with secret betting, which occupations will score the best or perhaps auctioning for tiles, etc. Both opponents would find mutual competition juicier. This way, its a little dry. Even though, this one deserves a lot of big thumbs up.