Review: Lords of Waterdeep – heroes living in the city

by Dušan on 11. 06. 2014
0
previous article
Review: Wrong Chemistry - Expand Your Lab - it's time for more spacious laboratory
next article
Review: Bioshock Infinite - Siege of Columbia - Booker Dewitt strikes back on the table
Contents 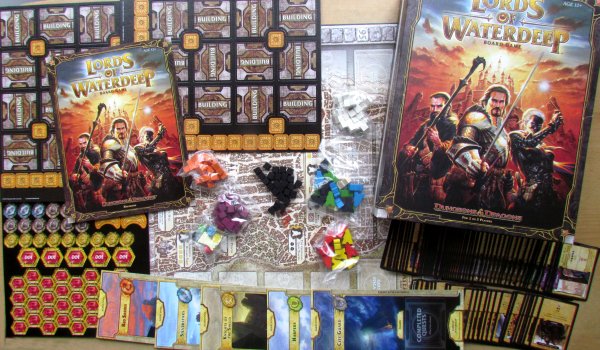 Although it does not look like that, even heroes are just ordinary people. And they simply want to relax after all these skirmishes with monsters as well as rogue people. City of Waterdeep gained fame as perfect resting place over the years in the world of Forgotten Realms. City of wonders, where everything is possible. Beautiful buildings, however, are only a veneer, to attract temporary visitors. Life in this city is not easier, than it would be elsewhere. Maybe its just the perfect opposite of that..

City of heroes is continually evolving and it comes to you at this moment. Its gates will be opened due to Lords of Waterdeep board game, which comes from the workshop of the famous publisher Wizards of the Coast. Their brought to our world famous games like Dungeon Command or D&D adventure games, such as Legend of Drizzt (review). You get caught in its clutches thanks to authors Peter Lee and Rodney Thompson and it was published already in 2012 as worker placement from the world of heroes!

Box at first glance does not suggest, that you should not expect another cutting through lines of bloodthirsty enemies. You will find a trio of heroes on the cover, waiting for their adventure. But in fact, they want a resting spot, that waits for them inside the large box. When you lift the lid for the first time, you will notice an interesting fact, that its end does not touch the bottom of the box. This not only creates an interesting visual element, but also helps you to open the box every time. And trust us: you will be doing a lot of opening. 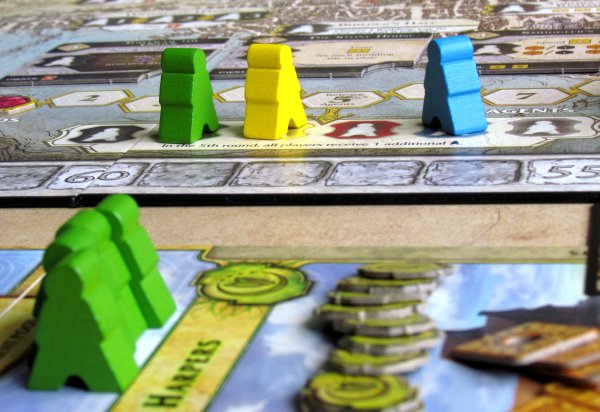 You will certainly appreciate it, because you will find not only rules (24 pages in length has nothing to do with the difficulty of the game) inside. First chance for the game to shine is waiting in form of game board. Beautifully drawn map of the city graphically represents the number of places in the city, where you will be able to send your servants. At the same time, map contains also plenty of sites for new buildings, decks or turn counter. Scoring scale is hugging everything, ending at number one hundred, but its not place, where your gain necessarily need to stop.

Heroes need some things to make their life more interesting. This fun is created by lots of cardboard pieces. The biggest is a pile of 24 buildings to visit, sixty gold tokens and other 36 tiny pieces serving victory points. Each of the players also has a set of chips in his color and everything ends with those tokens marking having over 100 points on your side. But because this game is a building one, there has to be a good dose of wooden blocks in the box, representing not only different types of heroes, but also players agents and a few other pieces.

Your faithful travel companion for all adventures waiting out there are 121 cards. Among them, you will find eleven different lords, you can become. Each of these characters has his own special task, for which he gets bonus points at the end of the game. Then there’s fifty intrigue one-time cards with text, but above all a pile of adventure cards. You need specific number of heroes to meet their requirements and only then can you celebrate a well-deserved reward. 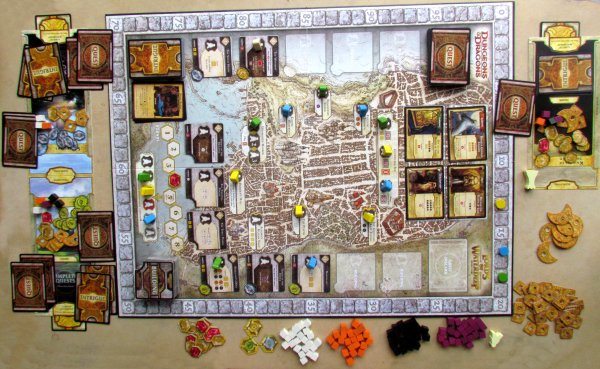 Among the cards can also be included player boards, which are dealt to each opponent at the beginning of the game. In addition to the picture and name, there is no difference between the factions. At the same time, rivals are also determined by color of their property tokens, scoring token placed on zero and wooden agents pawns. Each player is dealt two adventure cards and two intrigue cards to start with.

But these servants do not start all in player’s ownership at the beginning. Instead, an agent will be waiting to enter game in fifth round, when he joins ranks of other servants. These additional pieces are put to their position on the board, as well as drawing decks for adventure, intrigue and building tiles. Players create initial offer out of those buildings and do the same with adventures. In the end, they place round counter on one.

From the starting player, then everyone sends one agent to town in his turn. He seeks to provide best service possible for his master. Each building has one or more places, where agents can wait in line. Once this position is occupied, nobody else can go there with his piece.

Players immediately use effects offered by individual buildings. This can lead to recruiting heroes, gain of money, playing intrigue cards or construction of buildings under player’s flag. But there is also the opportunity to visit a pub, where their employee gains award of a new adventurous quest from visitors. While initially the choice is limited to buildings in the middle, players can also use new raised buildings later in the game. They will use its ability, but at the same time also have to pay for its usage to its owner.

Once everyone has used his agents, round ends and after players move round indicator forwards, they continue with sending new agents. Everything repeats itself and new buildings grow around town. But there is one important thing: Players can also complete one of the quests in his turn, but only from cards he holds in his hand. He can simply play it, if he has enough heroes, that quest requires. Colored cubes represent warriors, mages or thieves and player must have them in the correct desired combination. He will not only get reward for it, but also the opportunity to score this quest at the end of the game.

End occurs after playing eighth round of the game. Players may have accumulated victory points during the game, which are now added with rewards for all quests, gold coins, but also for the lord card, which was concealed until now. Player with the highest score is the winner. 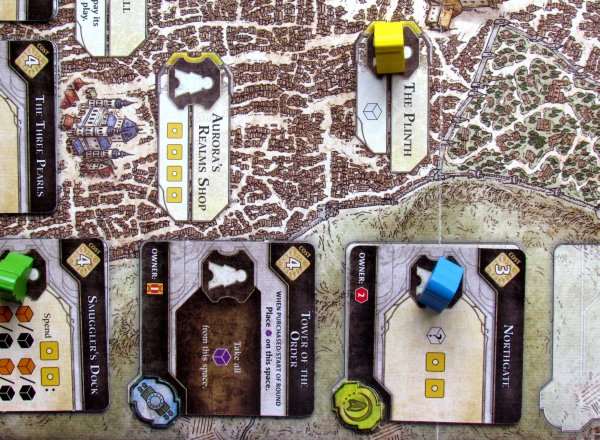 Lords of Waterdeep offers you the unique opportunity to become heroes manager. Why not? They were such a rock stars of their time. They had thousands of followers, and if they could write, they would be signing on different parts of the body of their girl fans. As their manager, you also want to get a good dose of cake and this game is just about all that.

The road to success is paved by trying to exploit and build buildings. These can bring benefit not only to you, but you also get paid, whenever someone else uses your building. This is very important concept, around which this game is constructed. Such ancillary revenues are very nice, because rivals will have to use these buildings from time to time, when middle ones are full. On top of that, usually these buildings offer better profits and the payout to owner goes from the bank, so it does not hurt that much.

As we have already said, buildings offer very important activities, that are stronger and more interesting, than the basic ones. With the addition of each new building, offer of places extend and players have a little more space, than at the beginning of the game. At that time, only thirteen vacancies are prepared for them and they must use them well with their agents. And because you send your pieces one at a time, someone may get empty handed. 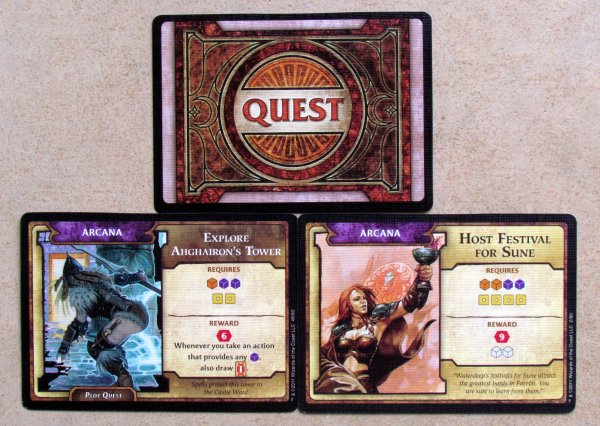 Very important weapons are mandatory quests, that you can play on your opponent. This completely disrupts his plans. When you have such task in front of you, before you can start completing other adventures, you must first successfully complete this one. And it can really do much harm. The game is indeed much more about conflict, than you would expect from afar. There’s even intrigue, which will allow players to take each other adventurers and other tweaks.

But we must not lose sight of our secret identity during the game. Commander will reward you for fulfilling the tasks of a particular type at the end. It is therefore important to try to collect and complete this kind of quests over the other, because you can get a big point gain from them and they may in the end decide the game. It is clear, that until the end, there is no evident winner in this game and that’s good, because even if you fall behind, game will provide fun until the end. Who would not want to nurture hope for victory?

As a good game with worker placement and their activation, even Lords of Waterdeep will not want some enormous investment of your time. The rules are simple and manual describes everything in detail, so you can quickly learn it and the game itself runs beautifully and is over within an hour. Fun is guaranteed in all available numbers, although with more opponents, you have a greater sense of tension, because there is less space in the city. 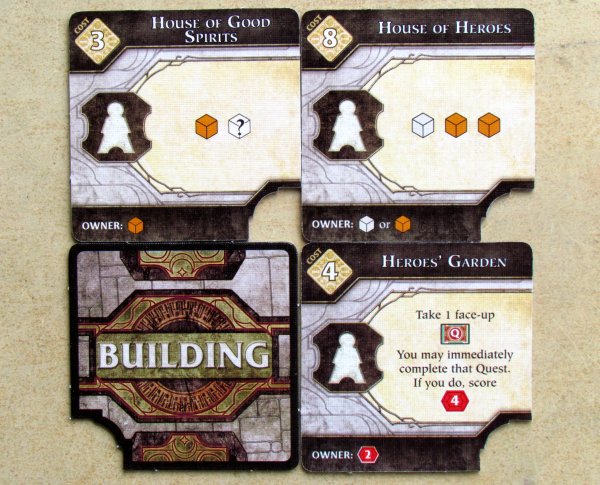 Ordinary worker placement crossed with famous world leads to game with hilarious atmosphere, but above all a great gameplay. Variability is guaranteed not only by different hidden identities, but also by random quests, buildings and intrigue cards. This makes each match completely different and you will want to enjoy them as much as possible.

Processing of this game is basically flawless. The authors have thought of everything from a detailed layout of the box, connecting tokens of ownership to a space on building tiles. Player cards also help in organizing various kinds of completed and uncompleted quests and all cards are of high quality and will last you hundreds of games without a wrap.

Lords of Waterdeep is a good strategy game, in which not only experienced players will find fun, but also beginners. The game not only looks beautiful, but is also a blast to play. It does not bring anything new to the genre, but all the familiar things makes one hundred percent cake. And this is really enough to make Lords of Waterdeep an excellent game, we would like to play again at any time.

Lords of Waterdeep is an example, how should in detail tuned game look, although it uses the old known mechanism, but can be tremendously entertaining at the same time. From the first moment you enter the city full of adventurers and start sending agents to do their job - recruit heroes and build buildings - you feel like in another world. A world, where you want to win. And each way for the victory will be different, because you will not only have to fulfill other quests and use different buildings. You're going to be someone else! Randomly drawn identity is key to entertainment since it decides about the winner at the end of the game. Moreover, players can attack each other with intrigue cards and profit from usage of their own buildings by other players. And all this within the confines of simple rules, which can be learned even by beginners. Lords of Waterdeep is an accessible game simply for players of all experiences and beliefs.