by Dušan on 06. 04. 2020
0
TOP Dětská
previous article
Review: Orléans Stories - from the diary of the kingdom
next article
RECENZE (Petr): Undaunted 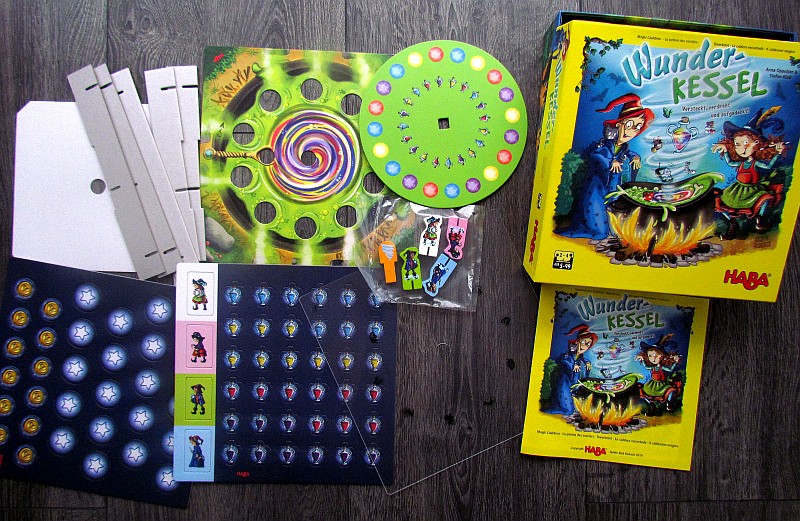 The huge pot in the courtyard is a legend in our school. Its origins are enshrouded in mystery, but we were told during our freshmen year, that its a thinking being. Although its not able to speak, it can express itself with symbols, so it always makes it clear, what raw materials the cooks should put in. No wonder we are all nervous, before the final exams, trying to decipher its requests. We’ve trained, but you never know what can happen.

Children will also arrive to one such cauldron in the board game Wunderkessel (Magic Cauldron in english), which was prepared for us in 2019 by author duo Anna Oppolzer and Stefan Kloß. The game was produced by HABA with illustrations by Julie Bierkandt.

On the lid, players see the title magic cauldron with two witches standing nearby. But there will be many more, even wizards, when the children lift the lid for the first time. But first, parents should help them build the cauldron. It is created from the bottom of the box, which is filled by cardboard cross and combined with several floors. Somewhere around them, there will still be a transparent sheet of pictures between the round rotating part and the kettle surface. All boards share a hole in the middle, which allows players to rotate it during each game with the help of a turntable pawn. As it moves, it also rotates a round plate, that contains colorful images. 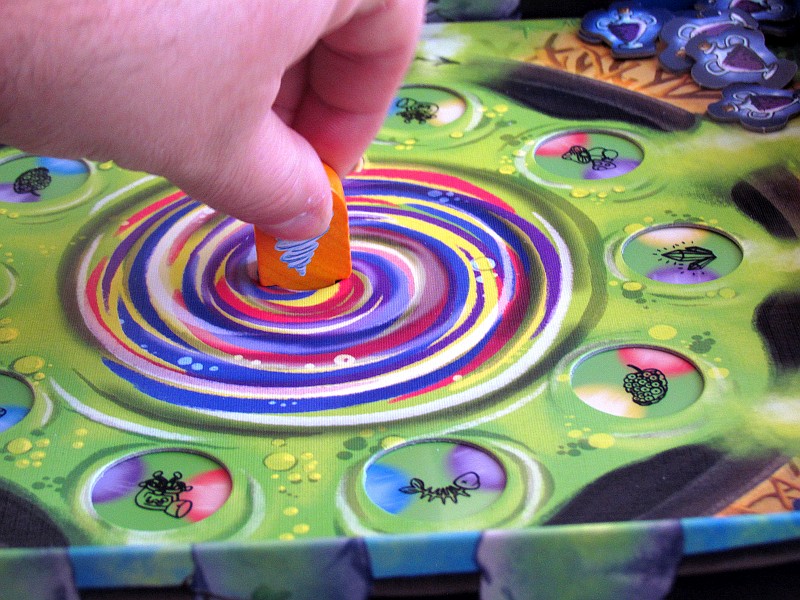 In setup, players will of course need this cauldron (box) and immediately fill its corners with magic drink tokens. Each corner gets one color. Each player chooses one wooden figurine of a wizard student and gets a matching token with his portrait. While keeping the small tiles in front of them, players place their pieces on the edge of the bottom, in a column belonging to the specific position of the ingredient, following the set starting order from the spoon clockwise. Each participant spreads three magic coins in front of himself. From twenty ingredient tokens, players build a menu table with rows and columns.

Then players will take turns. Figure of a player always sits near one of the boxes showing the combination of ingredient and color. The task of the player is now (at the beginning with a good deal of luck) reveal round token from the table and hoping, that it will be the one, that shows exactly that ingredient. If the player succeeds, his figure can move forward along the perimeter of the cauldron by three squares. If only part (color or symbol) is guessed correctly, the movement is smaller. If the player does not succeed at all, then he gets a chance to look secretly at one more chip to compensate for his failure. 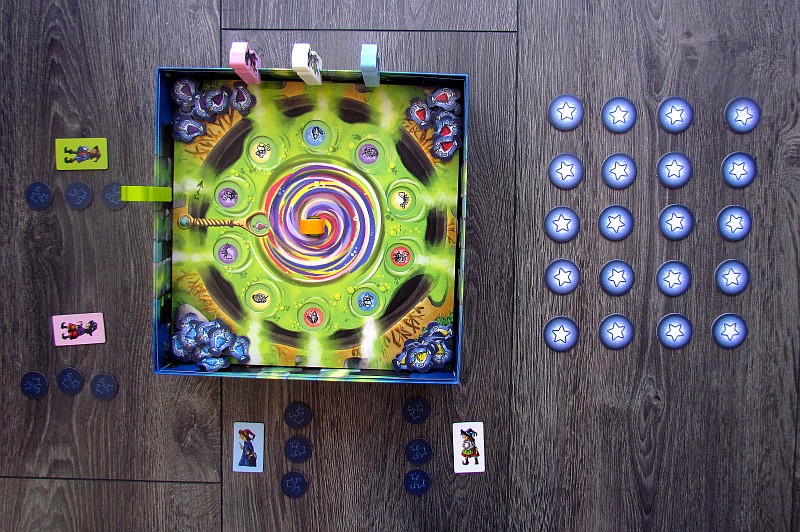 As soon as the player has run one full round along the edge of the cauldron, he has finished brewing his magic drink and the vortex event. is triggered. The player gets one bottle for this success. At the same time, he also rotate the circle with the ingredients and thus changes not only position of icons, but also their color.

However, players will get one more reward for flawlessly finding the ingredients – a chance to turn one of their coins face up. When he activates all three, he can instantly brew an extra bottle of one beverage. And this is very important, because the game ends, when the player gets three bottles of the same or completely different colors. This player has become the most skilful wizard. 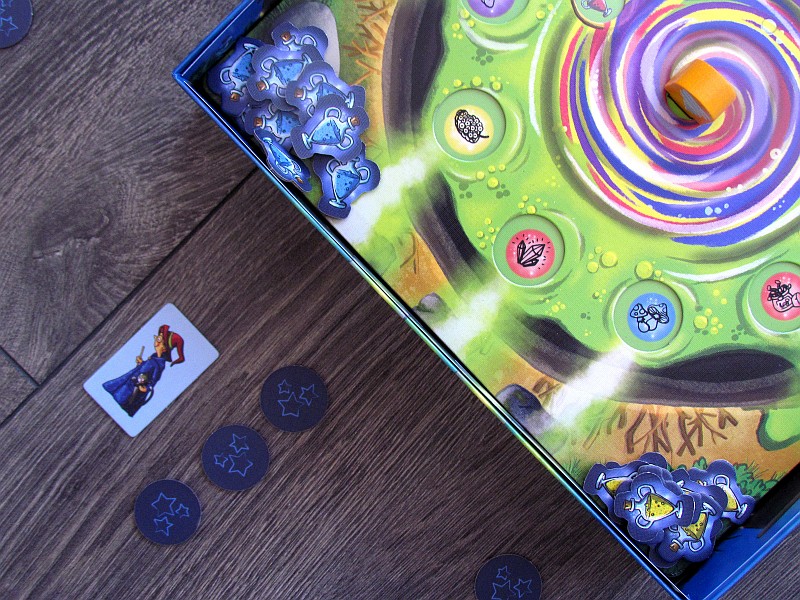 Wunderkessel is a board game, that is mainly intended for children. But, in contrast to all expectations, parents enjoy it as well, because it combines the familiar search for a needle in a cup and the principle of a rotating wheel, that constantly changes the conditions for finding new ingredients.

Players must show great memory sklil all the time, because they have to be able to orient themselves in the offer of twenty tokens and their hidden images. A little different tokens are important in every round, so it’s not enough to remember just a few of them. Colors change and players have to keep this in mind. 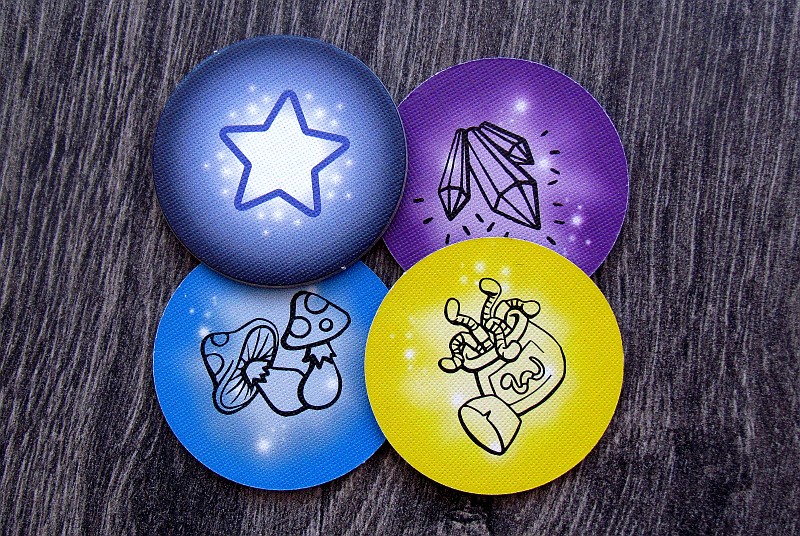 The games are fast. It is about the constant progress of the figures, which is the slowest mainly at the beginning. Once players get a little overview of the ingredient positions, everything starts to move forward much faster. Players can easily reach the end within half an hour. It is not entirely important, how many players participate in the game, because the tokens are available to everyone and each player is on his own.

Of course, there is a clever box design hidden behind everything, that captivates with graphic design. The game is at first sight interesting and tempting. Naturally, wooden figures are also delightful inclusion. 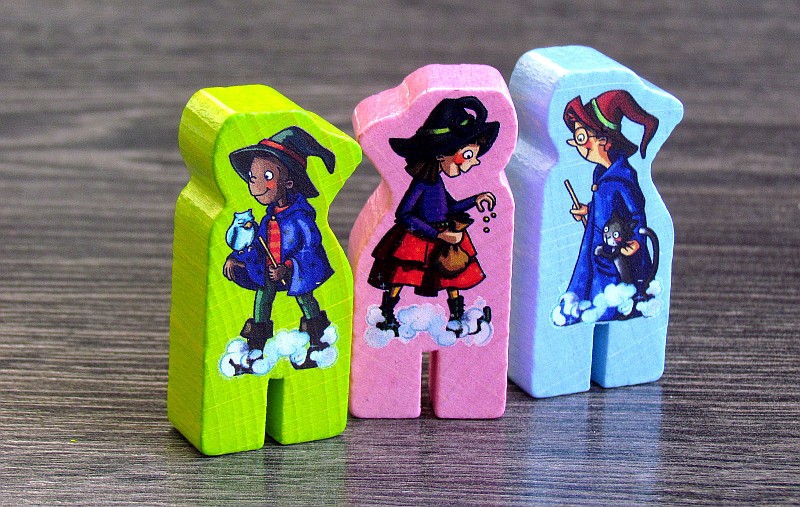 Wunderkessel is a board game for kids and families, where everyone cooks their own potions. But there is final exam at school. Each player has his own assignment, which is formed as the pieces move continuously. The memory game is appealing and simple, which is the basis of the success of every child’s game. And Wunderkessel will definitely be among the best.