by Dušan on 11. 02. 2016
0
previous article
Preview: Heldentaufe - teeth, the most valuable thing on each monster
next article
Review: Tail Feathers - flying mice
Contents 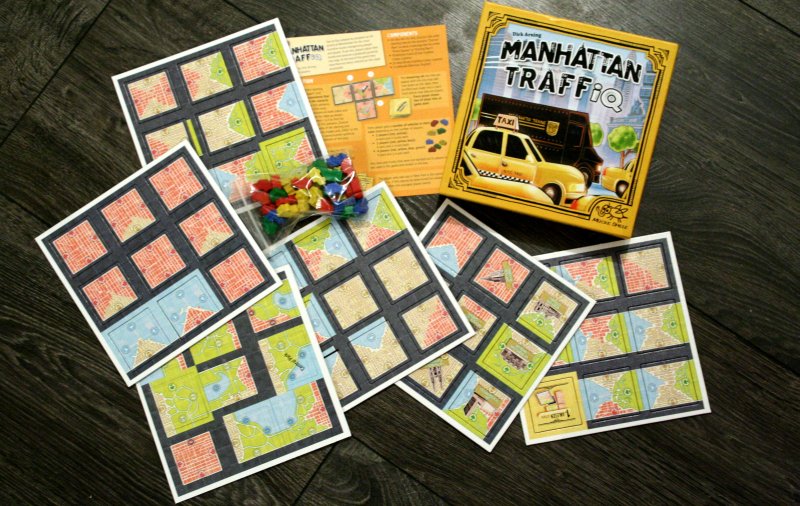 I always thought, that we have terrible traffic here in Brno. But it was only, when I went into the real world, I found out, what a true jam is. Clogged not only all the main streets, but all the side streets as well, cars flowing in a snail’s pace along endless traffic lights. Long straight, that you do not see its end, and that also is, where you usually need to get to.

And into this madhouse traffic invites us Dirk Arning in his game called Manhattan TraffiQ. This new adventure was published under auspices of company Mücke Spiele in 2015, which also introduced it at the fair Spiel in Essen. Graphic jacket was designed by Christian Opperer.

Game itself is hidden in low square box similar to the one, from which we saved Atacama and Takamatsu. This time, however, whole box is painted in yellow just as notorious taxis in New York City. Fly in the Mücke Spiele logo sits on the lid, checking out truck standing there and then, it will follow us and curiosity inside. There are primarily tiles (after punching out), which represent map of the entire city. Thus, only 44 of them, while others are special action tiles or starting positions. 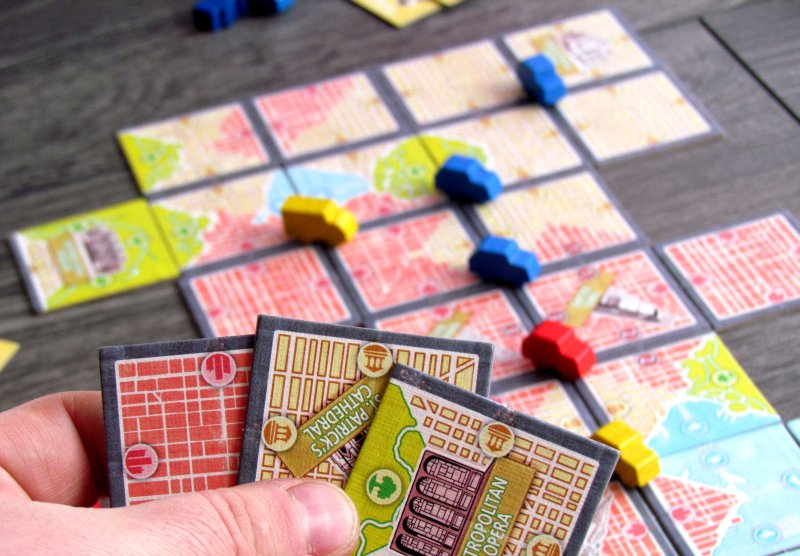 Along with cardboard tiles, bottom is also occupied by thirty-five vehicles in four colors (corresponding to players). There are taxis and trucks, that will drive on city roads. But first, we must find out, how to do it in the rules, that only have four pages.

At the beginning of every game, players will form the centre of the city by connecting four starting tiles. Beside them are placed action pieces divided by type into four stacks of two. All remaining city tiles are shuffled and laid aside as a drawing pile. From there, each participant gets two pieces to start with. To start playing, players must also receive wooden toy cars in their chosen color and in an amount corresponding to number of participants (most cars are given out with two players competing).

On his turn, each player may perform two actions. But his choice is out of four activities, two of which are tied to beginning or end of the turn. As first action of his turn, an active player can add one new map tile to the city. This new section has to match other tiles on all its sides and even roads have to continue. 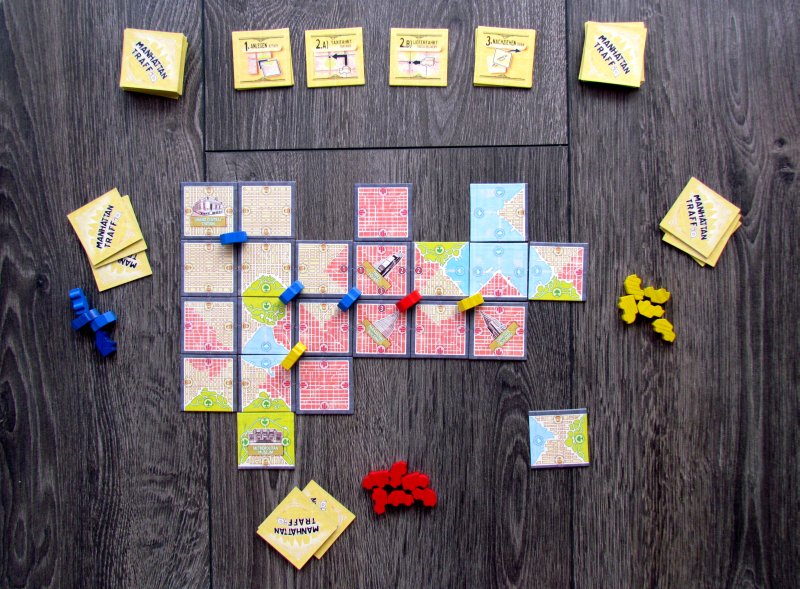 These are, after all, the most important thing for players as transport managers. A new tile can be received at the end of the round, which can be carried out by using other fixed action – drawing. That’s not all. At a time, when players manage to complete a new intersection – by connecting four pieces – reward for this is placement of one vehicle of his choice.

Neither of these actions is however mandatory. Instead, player can move his previously placed cars on the map. Driving taxi and truck can only be done once per round (unlike, for example, drawing new tiles). Ordinary car can move more intersections ahead, but must stop on one of them. But it may never pass incomplete connection (must always be all four corners completed) and can not skip over any vehicle (roads are narrow in this city). Trucks are a lot heavier and slower – they can move by one intersection only.

And what is actually reason for such a mass movement? At the end, players can challenge their opponent and sum number of vehicles in column and row of vehicle, that has now been moved. When a player decides to take advantage of this opportunity and wins (by having most cars on two roads intersecting the position of his car), then all other cars of other players must be removed from these streets. 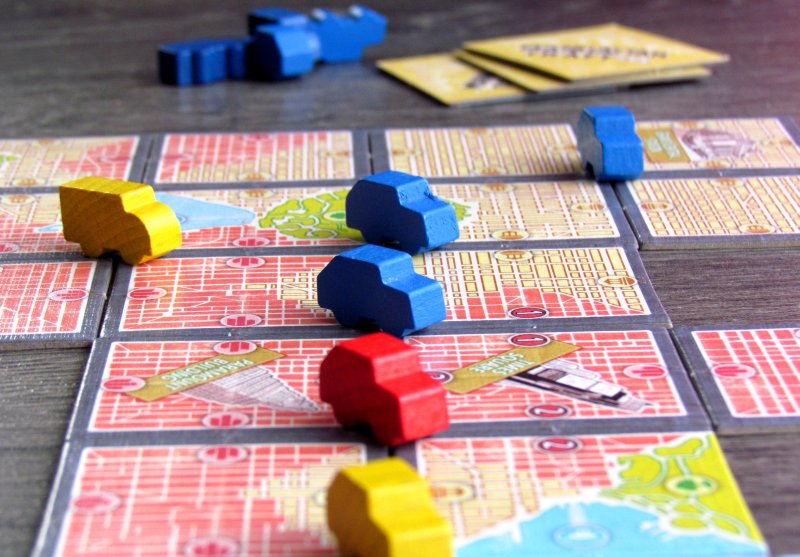 But then is turn of player next in line and with the same options. The city is expanding, roads are growing, cars disappear and everything is coming to an end. That comes, when a player uses his last car (each car is used only once and can not be returned to player’s property after ejection from the street), or when they run out of tiles to place. Players have to sum points for all vehicles in their color, which are still standing on the site. Each player gets two points for truck and a point for each cab. Whoever has the most points in total is the winner.

Manhattan TraffiQ is an interesting game with constantly changing majority. But they are not the most important thing in here and do not guarantee overall victory. On the contrary, majority is means to weaken other players and completely annihilate the competition on two streets. Players have to plan well and always move their cars to safety. But the game also contains the actual building of the city, where the road undulates, has endingss and then begins again.

This is really thoughtful game. While players get city tiles randomly from drawing pile, they still each time have a little choice. In addition, they simply are not obliged to place a new piece. They might instead do other actions. And when they surrender this option, they can draw new parts of town, which can be used in the future. 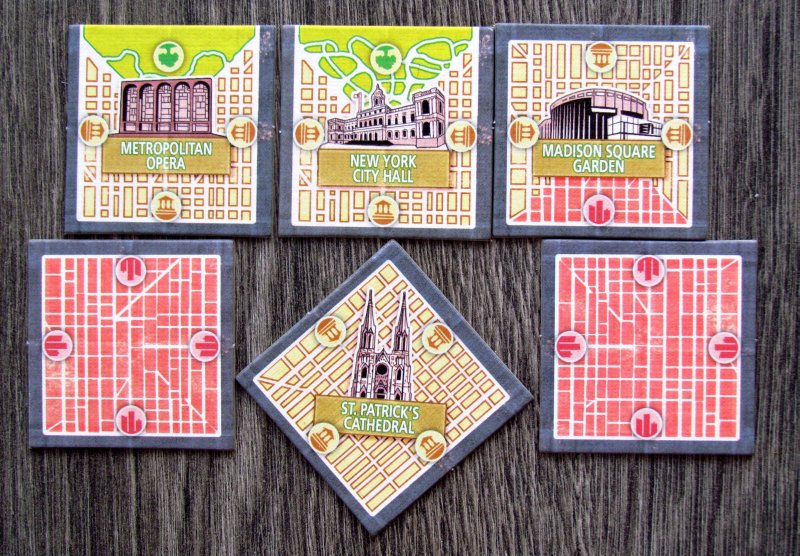 If you choose good companions, then this game is pretty agile and also very tactical. All this said with two players. With growing number of players, it is clear, that your impact on development in the city decreases. Game time is always between thirty and forty-five minutes, which is not so little, but also not too much. Fortunately waiting for next turn is not overly long and most players have a lot to think about, before their next turn comes up. With the everchanging situation, there is always something to assess.

What probably surprised us the most (for game of this type) is theme itself. This time, its not here just for decoration, but you really have feeling, that you are moving your cars around streets of New York. Ultra stylish element is then the possibility of getting rid of your opponent’s cars. All it takes is one cleverly played new piece and suddenly everything can be different. Game is fortunately not just dry thinking, but also offers interesting twists.

Manhattan TraffiQ is clever and interesting game, that definitely can take your interest. Although placing square tiles and connecting them to regions may someone recall Carcassonne, this game is completely different and offers players an interesting tactical possibilities. Manhattan TraffiQ is an excellent choice for lovers of tactics and majority games, especially if they will play it as a duel.

Manhattan TraffiQ is a game, in which you build a city and fill it up with cars. Trumpeting can be heard pretty soon. And there will also be acceleration squeaks, because the cars will move at your command. Your motivation is to create superiority in the sum of rows and columns intersecting the current intersection. This can allow you to getr id of your opponent's cars from the board, so it is necessary to pay attention to these situations. Only player, who has most cars in the city in the end can be winner. Game is very tactical, with no significant influence of chance (choice from tiles and various actions each turn) and works well in two. In more, it is becoming more chaotic and also time to complete extends. Yet Manhattan TraffiQ is still a pleasant surprise and a good representative of tactical games.